Little creatures such as a bee, an ant or a butterfly can add to a painting or become the painting. Diana Bullock began her interest in these little creatures while working on her notebooks filled with sketches and sayings, an activity which she advises all of us to do. 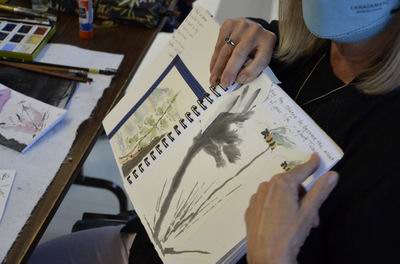 Diana Bullock brought samples of her bugs, birds, frogs, turtles and mice that were helpful to artists attending her workshop when it came time for them to paint. 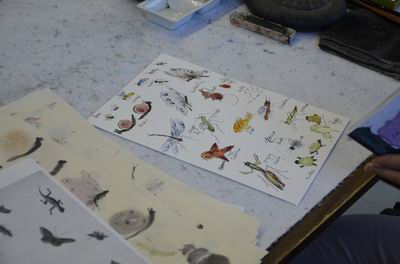 Suggestions for working on little creatures include using small brushes, a sumi-e pen for details and a pen with white ink for adding an eye to a tiny creature. 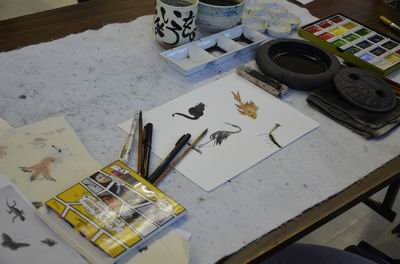 Flocks of flying birds started the workshop. Artists often create birds that look like a set of identical check marks. To add realism, Diana Bullock says start some of your check marks from the side you do not usually use; that is, if you usually start on the left and finish on the right, do the reverse. 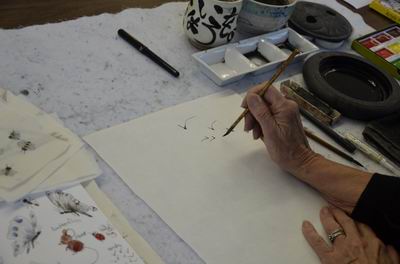 Bees are created with a head of small blobs and then black stripes for the body leaving space for the yellow stripes later. 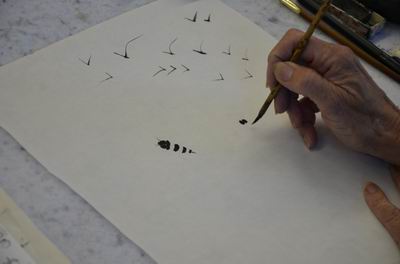 A grey tone is used for the two sets of wings. Diana Bullock showed these insects in the two most common views: looking down at the bee or from the side. 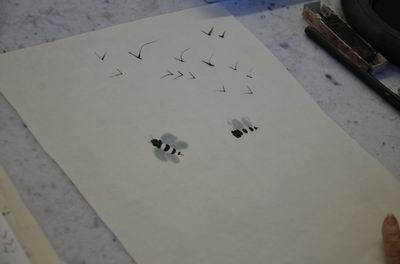 Use the sumi-e pen to define the wings and add veins. 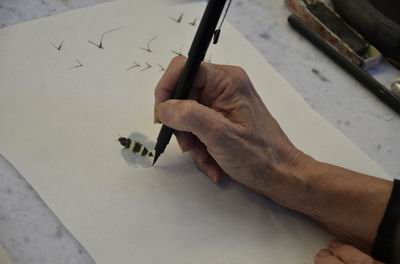 The ant as seen from above and the side were created. Though insects may be small, the number and variety of legs alone show the complexity of each bug in the insect world. 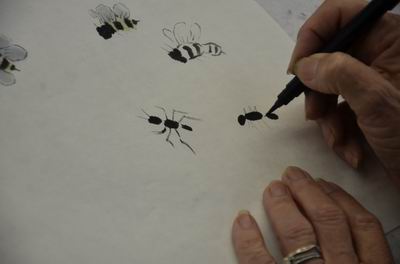 Paint a butterfly wing with a single side brush stroke. By adding a mix of colour onto the brush, you create the unique beauty of the wing. 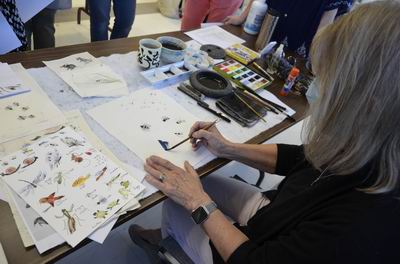 Then add the body. 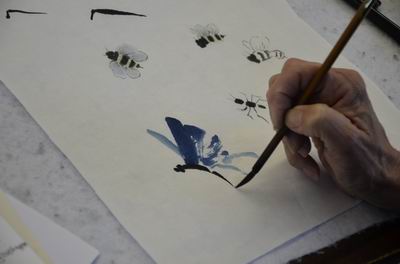 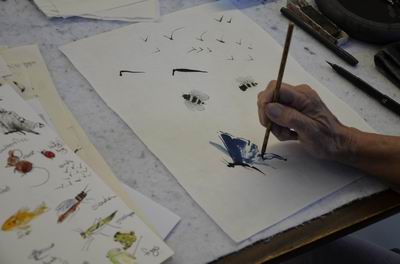 A frog's body can be created with a few broad brush strokes. Then use the small brush to outline features like the eyes. 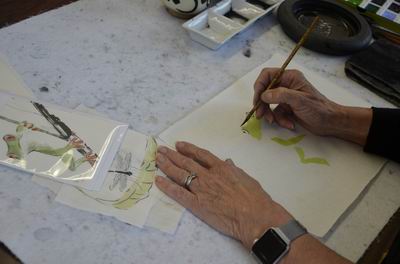 Frogs have extensions to their arms and legs that are similar to fingers and toes. 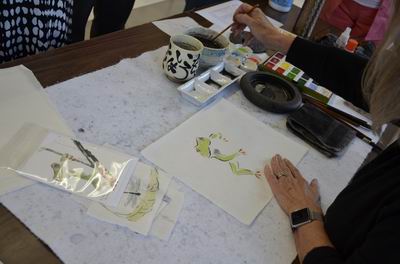 When creating these little creatures, consider adding a second one or more to develop your painting. 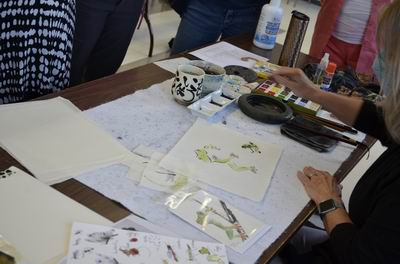 The body of the dragonfly is similar to the butterfly, however, the large, sheer wings and long legs create a very different insect. 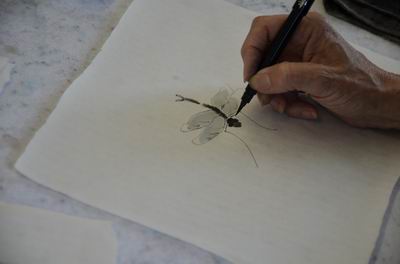 A duck is often found in a waterside painting. 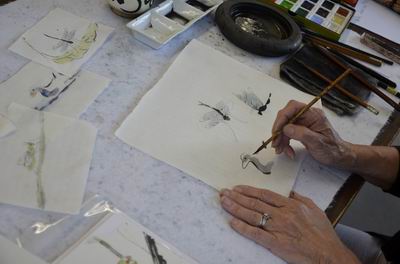 A cricket is yet another insect with distinct features. Learning to paint these insects is way of studying an infinite variety of tiny though complex bugs. 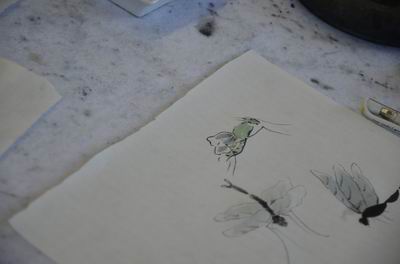 A crane can add to a painting and can be quickly painted in the background as a silhouette. 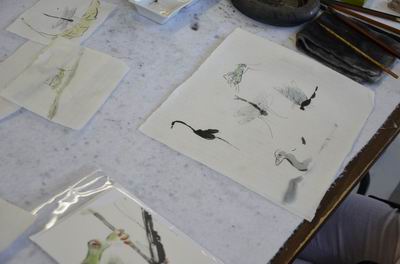 Next, the artists would try their hand at painting Diana Bullock's many little creatures with help from handouts. 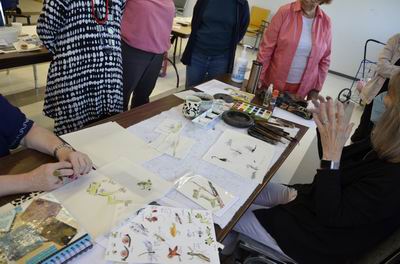 Remember to complete you paintings even with these small creatures. Adding a branch for your frog to hold provides a setting. 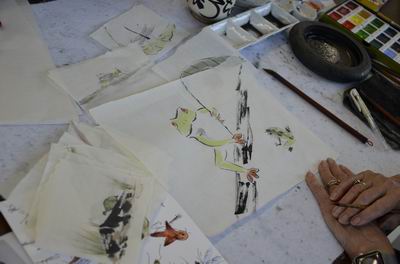 At our subsequent show-and-tell session, a suggestion was to use the white pen to add focus to the eye of a frog. 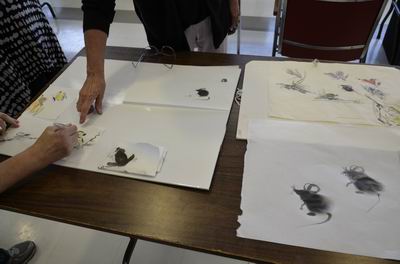 Each of these creatures included a hint of its environment. These enhancements make a little animal more interesting to the eye. 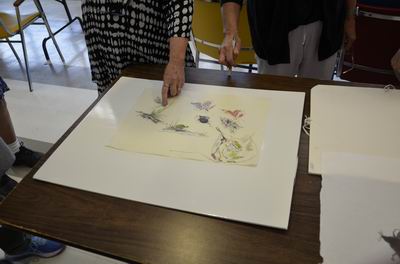 This dragonfly looked ready to fly off the paper. 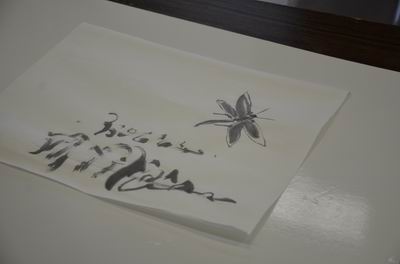 Mice always seem ready to entertain us. As with the rest of the artists' work presented, Diana Bullock made some suggestions to consider. 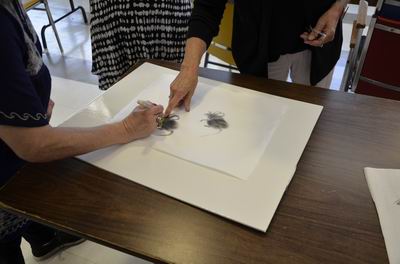 This artist created many bugs and mice including the praying mantis which, like every other insect, has its own proportions, legs and antennae. 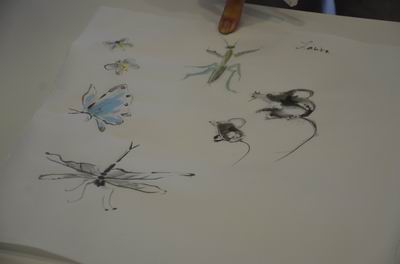