Hundreds of waterfall photos can be found on the Internet said our instructor Richard Tang. These photos help you see details you need to know when painting a waterfall. This photo showed the effect of layers of rock on falling water. 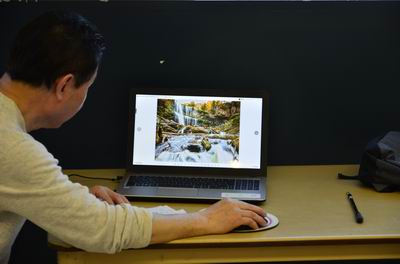 The waterfall has fascinated painters for centuries which lets you see how other artists approached the subject. 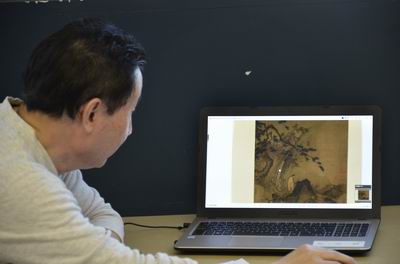 For the workshop, Richard Tang brought photocopies of paintings as another aid to artists. 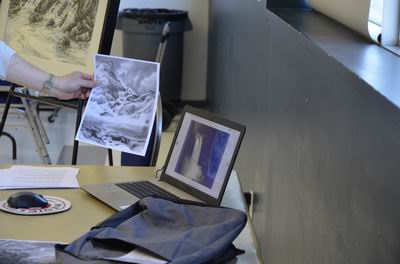 You should have an image in your mind of the waterfall you want to paint Richard Tang told the artists as he began painting. Sketch an outline of the flow of water. 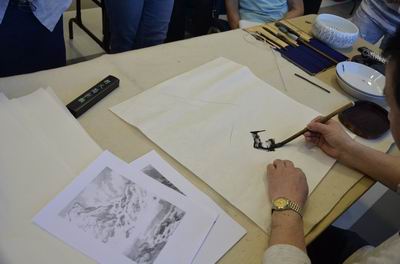 Richard Tang began in the foreground with very black ink. He used the whole brush, sometimes the side and sometimes the base of the brush, to create a large rock face on the right side of the painting. 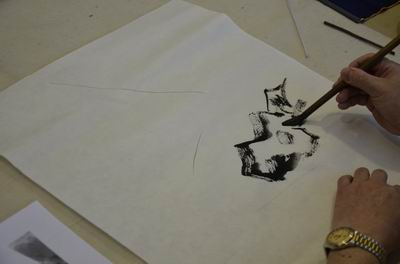 Two rocks were added in the midst of the waterfall. The flowing water about these rocks would come later. 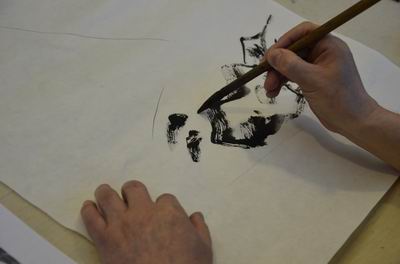 On the other side of the waterfall another rock face was started. Richard Tang worked in strong, bold strokes to create the imposing rocky terrain. 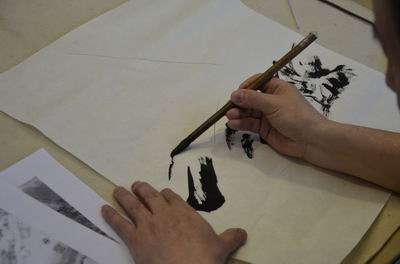 Then he extended the rocky terrain on the right side. 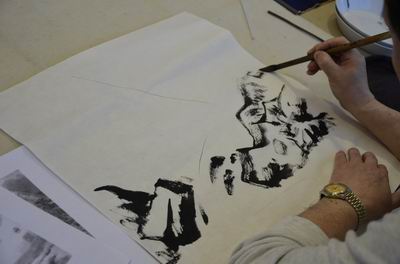 Within a few minutes the foreground had taken form. 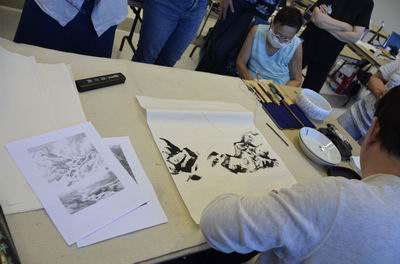 A tree was added to the left side of the waterfall. When creating a waterfall, think of the entire natural composition. 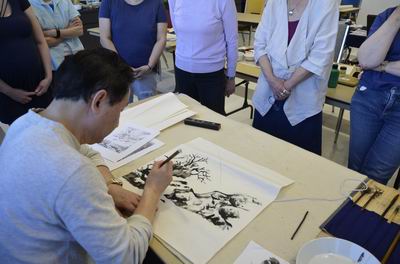 The distant origin of the waterfall was created with a lighter grey to indicate distance. 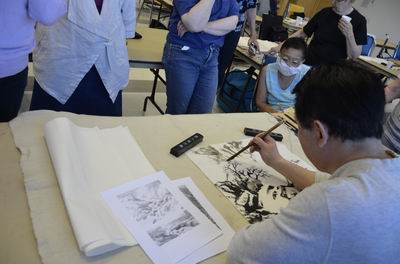 Using the side of a dry brush, Richard Tang created the rough texture of the rock. 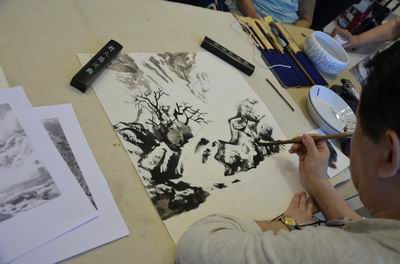 Leaves were added to the tree. When you create the leaves remember that the leaves should be in shades of ink depending on their proximity to the person viewing the scene. 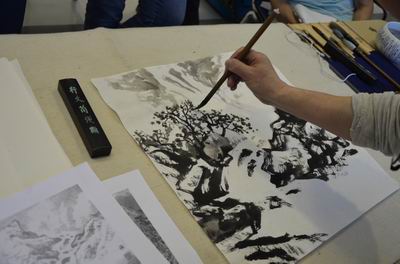 Reviewing your work periodically, as Richard Tang did, is a good idea when you paint. At this point the structure of the waterfall was complete though the flow of the water needed work. 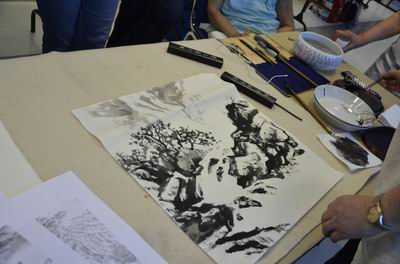 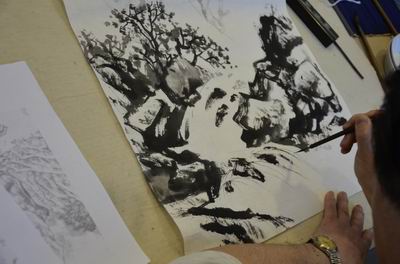 Near the base of the waterfall the mist was painted with the fine brush. 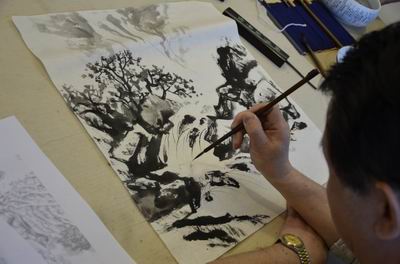 Cloud-like circles indicate the mist and foam found at the base of a waterfall. 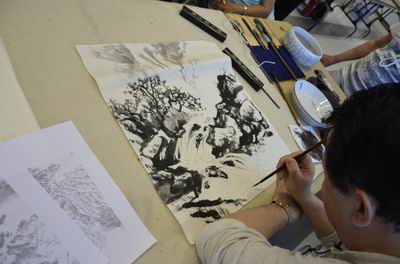 The result of these additions with a fine brush was the creation of fast-flowing water. 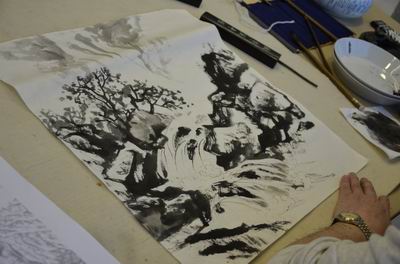 Richard Tang added a wash of ink to parts of the painting to fill in the work with a variety of tones for the rocks and the water. 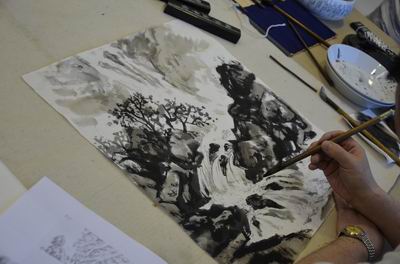 A second painting focused on the details of rushing water. 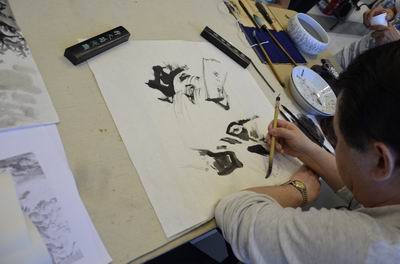 A few brush strokes around the rocks breaking through the water fall, display the feeling of force within the waterfall. 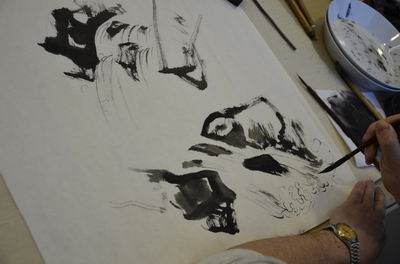 It was time for the artists to try their hand at painting a waterfall. 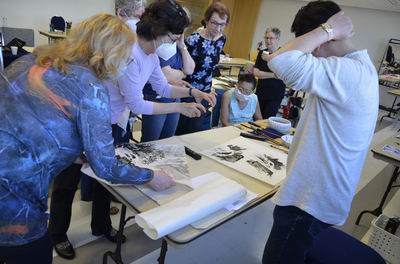 A painting by Richard Tang inspired everyone. 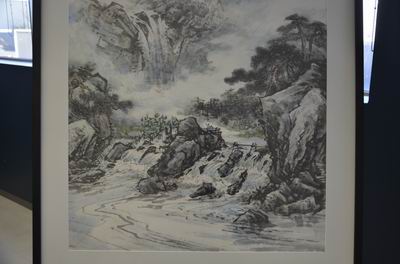 Help from Richard Tang was appreciated. 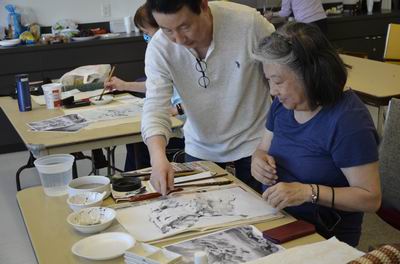 Painting splashing water in mountain scenery can be contemplative. 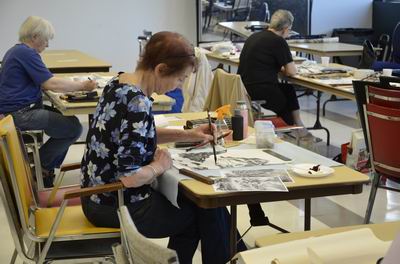 Falling water will continue to attract us even more after this workshop.