The plum blossom, explained Po Man Chan, appears late in the winter. Snow is still on the tree. The plum blossom is often seen as a harbinger of spring. 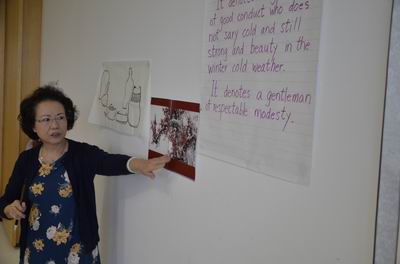 Understanding how to paint a single plum blossom is the key to painting a plum tree filled with blossoms. A blossom has five petals. Po Man Chan presented it in several views. A calyx and stem beneath the blossom supports it on the tree. 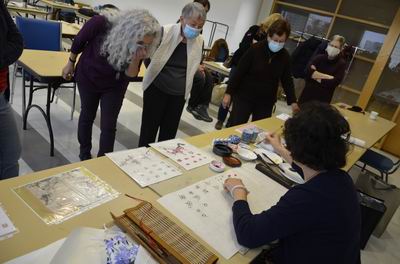 Po Man Chan painted a branch to show how the blossoms would appear on a plum tree. 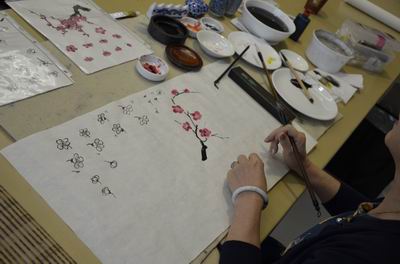 The plum blossom is culturally associated with a group of trees and flowers called the four gentlemen: bamboo, chrysanthemum, orchid and plum. The plum denotes a modest gentleman known for his good conduct. 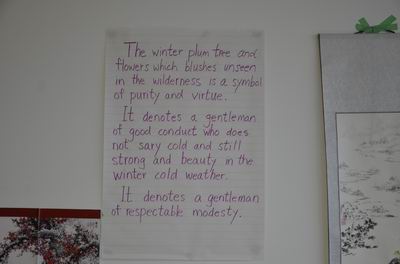 A famous large painting of the plum blossom is found in China. The painting expresses the vitality and complexity of nature as seen in an old plum tree. 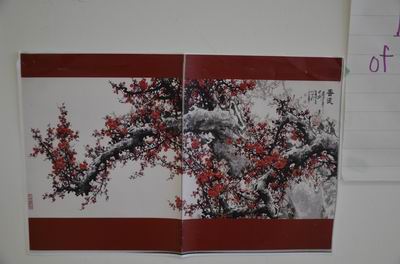 Begin a painting of a plum tree with a branch in a single brush stroke. A large dry brush creates the effect of an old branch. Leave space for the blossoms. 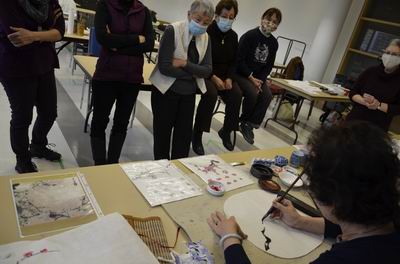 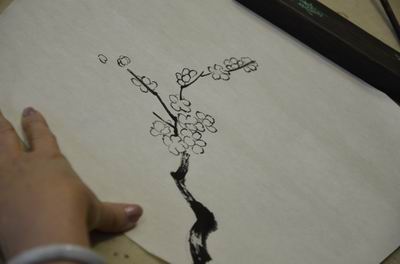 Stamens protrude from each blossom. 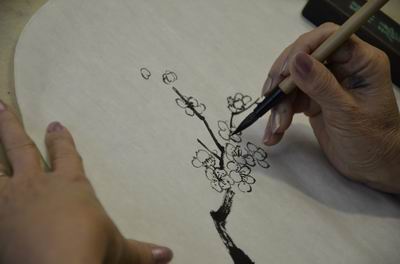 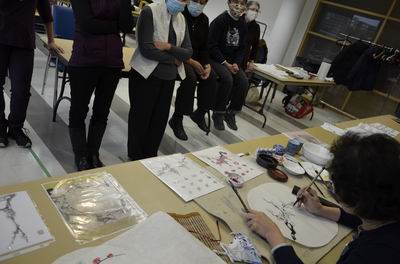 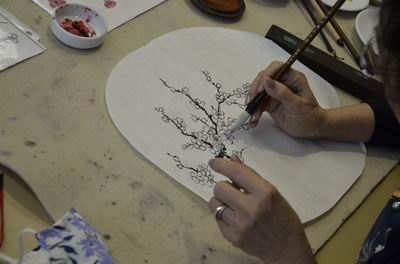 A heavier paint such as gouache white is used for snow on a branch. 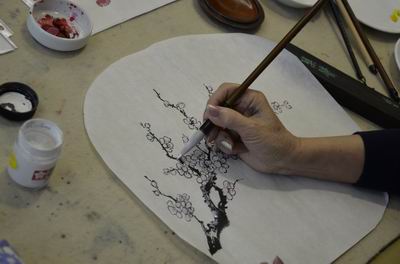 A background can be added. Po Man Chan reminded the artists at the workshop to use a dry brush and paint in small circles. A wet brush leads to bleeding the background ink into the plum tree. 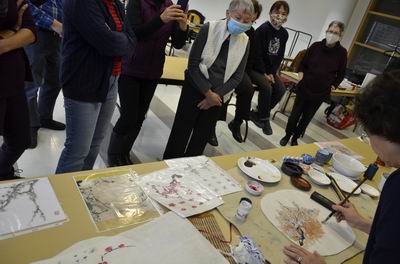 We tried creating our own plum blossoms like this vibrant reddish set of blossoms. 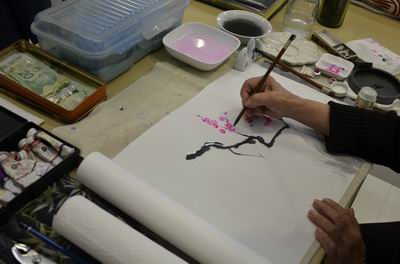 These branches and blossoms make a life-like image that you might see in the spring. 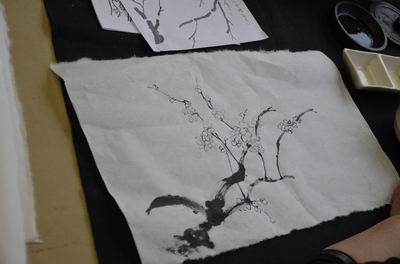 Po Man Chan next painted a plum blossom on a branch coming from a porcelain jar with a pine cone. This still life painting began with the pine cone. 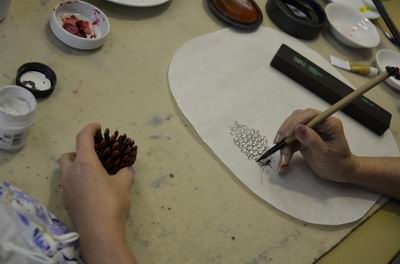 Creating each wooden petal on the pine cone takes patience. Working with a pine cone on your desk as a reference is helpful. 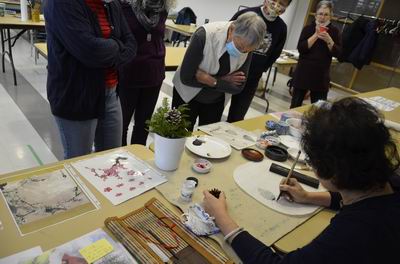 The cup-like petals of the pine cone are painted a light brown with a darker brown for the interior parts of the cone. A pine cone has a stem to attach the cone to a branch and pine needles near the base. 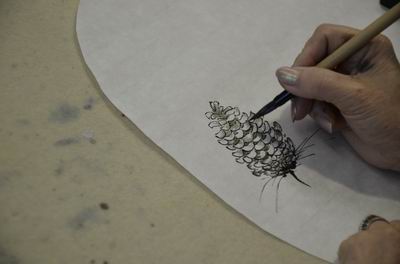 We tried creating our own pine cones. 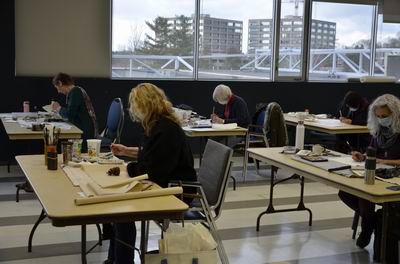 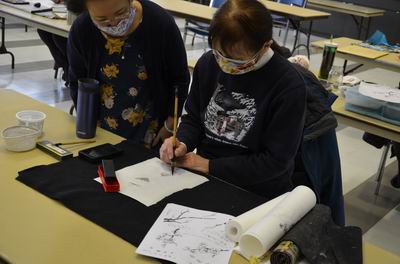 Po Man Chan continued her painting with red plum blossoms on a branch coming from the porcelain vase. 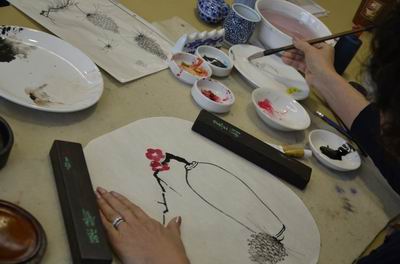 Pink blossoms in a variety of sizes and more branches were added to the painting. Po Man Chan added yellow paint to the interior of the blossom where the stamens and pistil of the blossom are located. 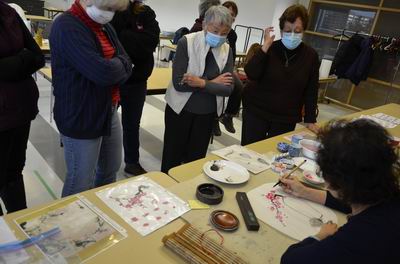 A background was added in the same manner as the earlier painting with a dry brush and small circles. 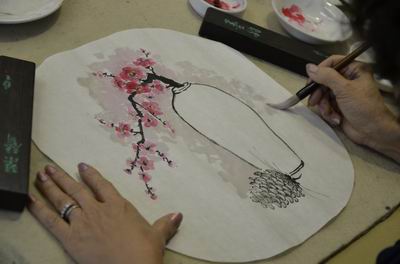 A pattern on the porcelain vase created another dimension to the painting. 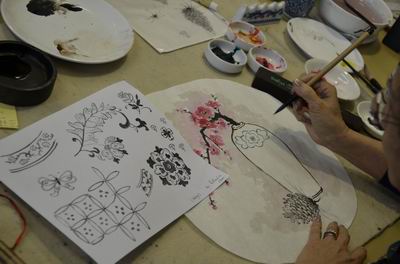 The challenge when adding a pattern to the porcelain vase is to also indicate the roundness of the vase. 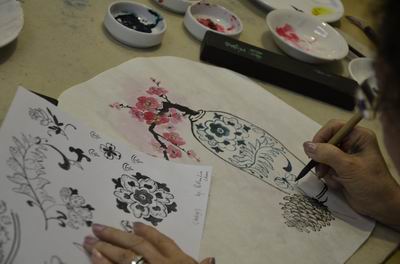 We gathered for a photo of ourselves before working on more plum blossom paintings of our own. 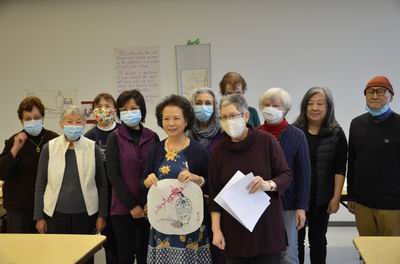 You can learn more about Po Man Chan in the links section.