The rat has been around a long time. In ancient times artists painted this adaptable animal on scrolls as Tien Chang showed. 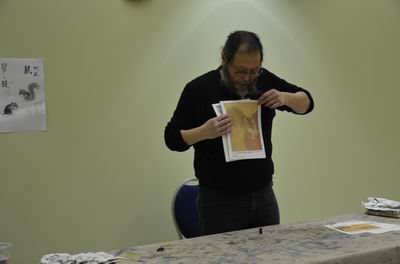 The rat and the mouse have the same name in Chinese. The squirrel, which is related, is called the pine mouse. The three animals have a similar shape. 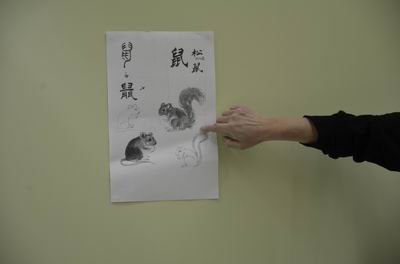 Tien Chang brought a scroll to the workshop that contained many small animals, birds and insects, which are often found painted on scrolls. These small animals play an important part even in a large painting such as a landscape. 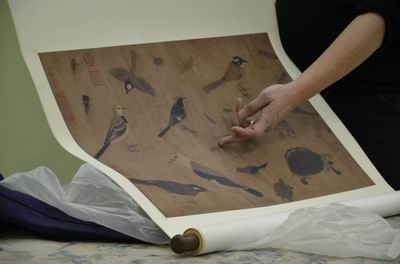 He began the mouse body with a circular brush stroke. 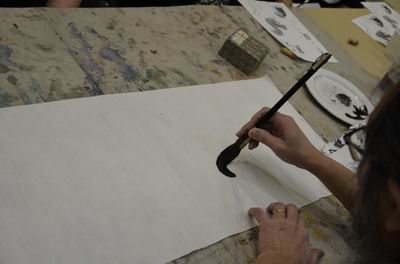 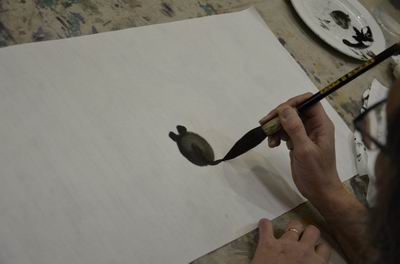 A second mouse began in a similar way. 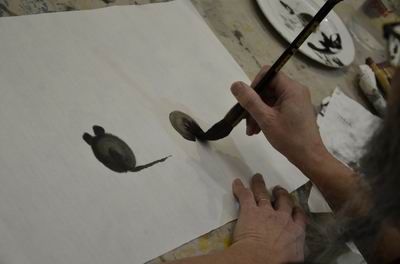 By carefully controlling the brush, Tien Chang added a head, ears and a paw to change the perspective. What is difficult is to avoid running these sections together. There must be a slight space between the head, the ears, the paw and the body. 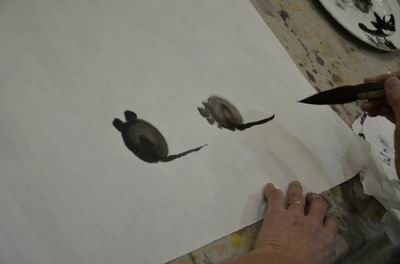 The squirrel is similar to the mouse except for the bushy tail. 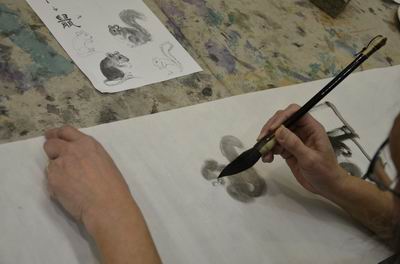 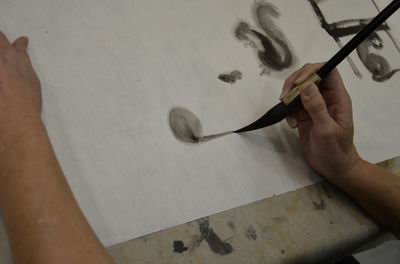 Tien Chang discovered a technique of painting the tail with short pulses. 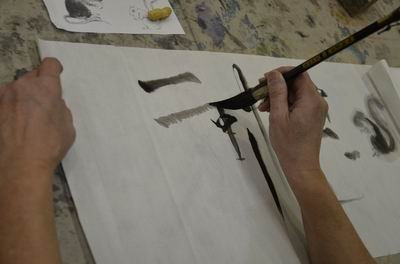 He found that practising characters in Chinese calligraphy with long brush strokes can also help in painting the tail. 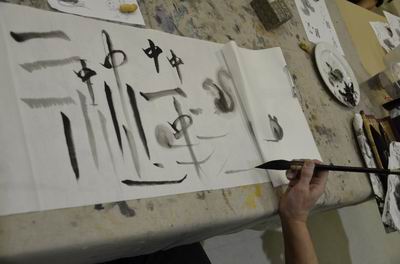 Tien Chang demonstrated painting a squirrel that is facing you. 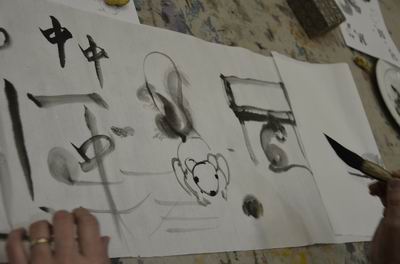 Light gray ink created the fur on the squirrel's head. 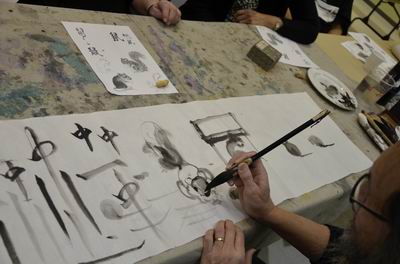 Whiskers can be added though Tien Chang cautioned that the whiskers must not be too pronounced. 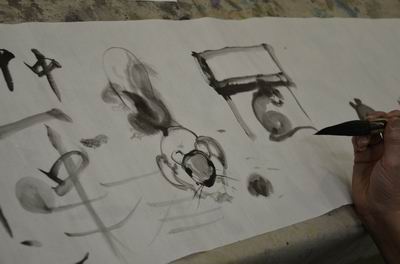 Artists at the workshop created their own mice. 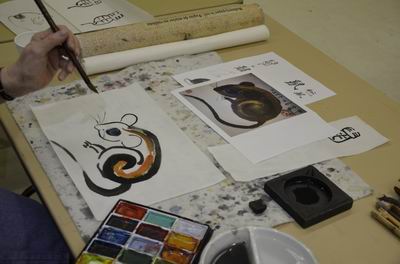 Creating a mouse requires controlling the ink to give different parts of the mouse a different tone. 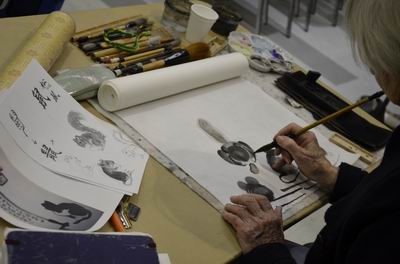 Some artists created a collection of rodents. 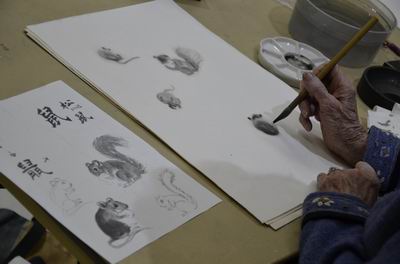 Tien Chang came around to offer help on the mouse to artists. 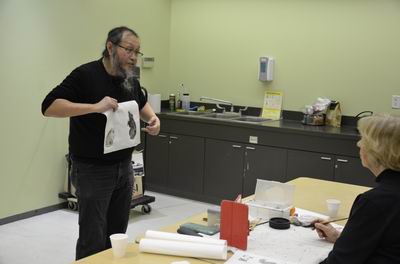 A painting of a different subject like a pine tree can be made more interesting with the addition of a small animal like a squirrel. 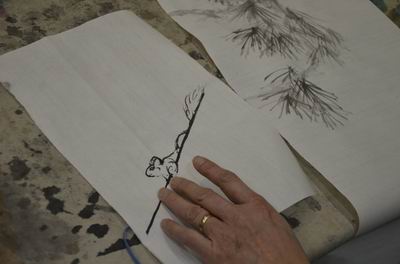 Tien Chang added a squirrel to the side of a pine tree painting. 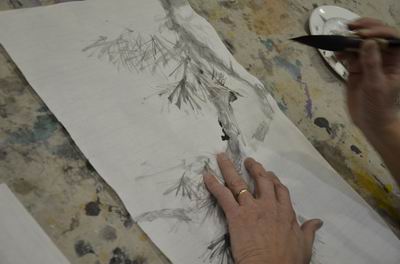 Next, he discussed composition. In this painting there is a considerable white space. 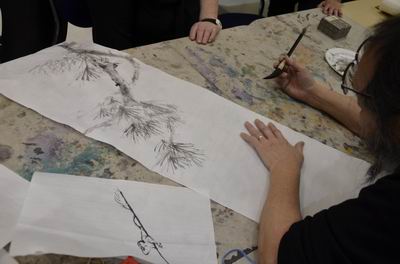 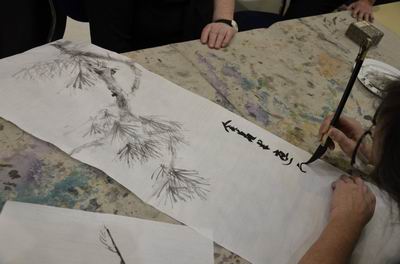 The writing draws the eye to both the painting and the words. 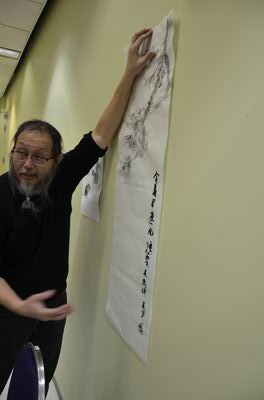 Tien Chang added dark ink to make some details of the pine tree and squirrel stand out. 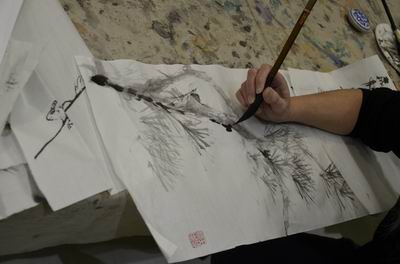 The result was an interesting composition for the eye and mind. 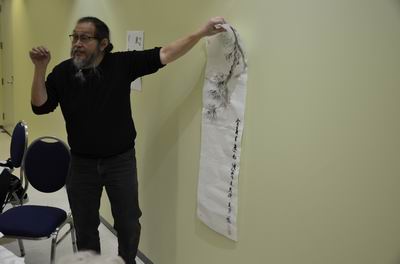 We had a better appreciation of the rat, mouse and squirrel with Tien Chang's workshop.