The batik style of painting removes a lot of control that we have when we paint, which creates surprising results. Diana Bullock began her workshop by showing some of her paintings using batik such as this abstract. 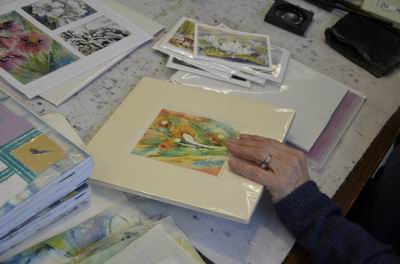 Batik can also be used in conventional paintings that often become enhanced by the happy accidents of batik, as Diana Bullock calls the unplanned effects of batik. 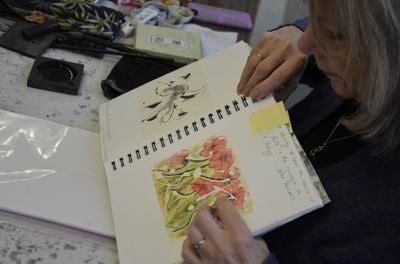 A fish was the starting point for this batik workshop. 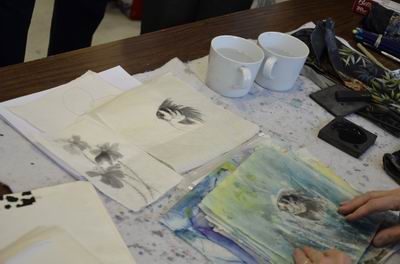 Placing the sumi-e painting of the fish on wax paper, the next step was to bring it to the wax table. At this table, heated paraffin wax in bowls would add the resist markings to the painting. Another common resist to use is milk with cream such as 2% milk. 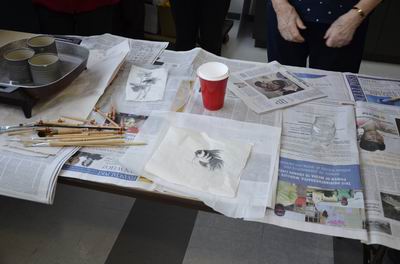 Where to add the wax is a choice. You can add wax randomly in brush strokes or using drips of wax, or you can create a design with the wax. Diana Bullock put wax over the fish. Note that you should only use old brushes for wax. 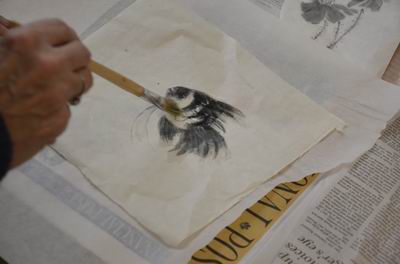 Then brush strokes were added in a pattern similar to aquatic plants you might find in water. 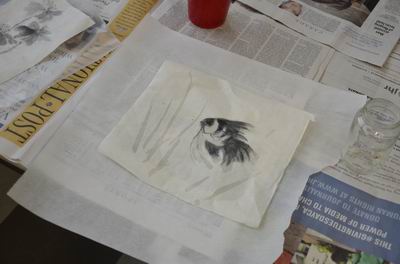 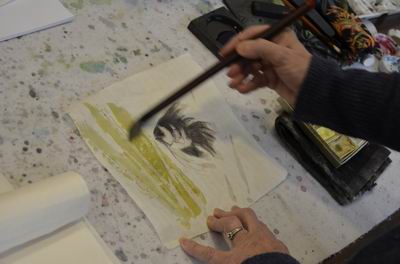 The finished wash was a mix of colours. Note that the wax on the fish protected that part of the painting from the wash. 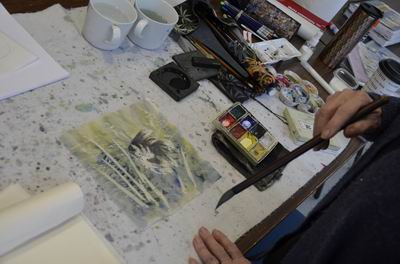 Another coating of wax was added to the painting. This wax covered the entire painting. 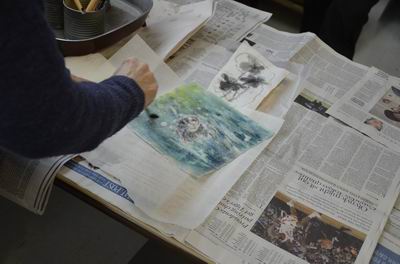 Then the painting was left to dry. 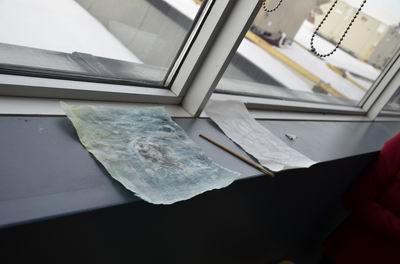 Crunching the painting into a ball came next. 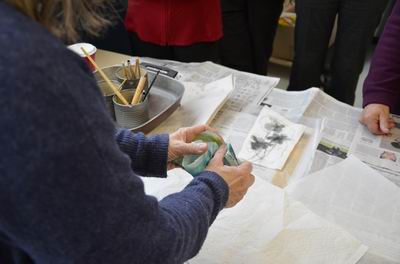 Another wash put sumi-e ink into the cracks in the wax caused by crumpling the painting. 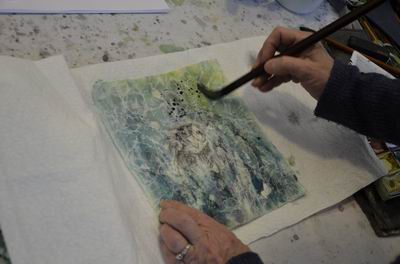 Ironing removes the wax from the painting. First you must wrap the painting in protective paper, which will also absorb the wax. 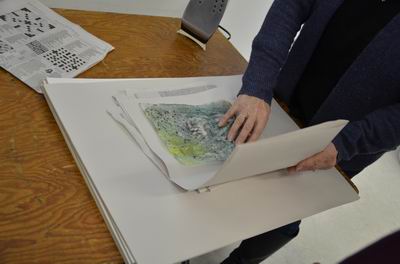 Then iron your painting. 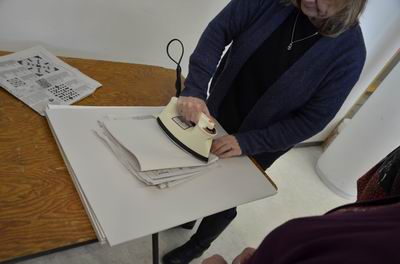 The result is a vibrant, batik-flavoured painting. 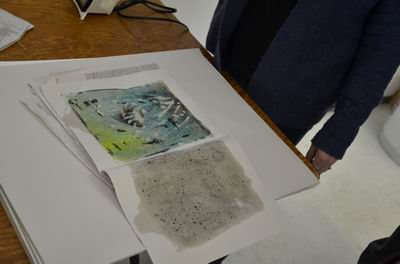 The artists at the workshop took to the waxing immediately after Diana Bullock's batik demonstration. 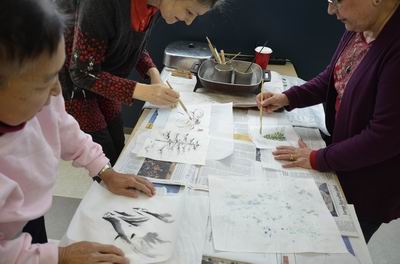 This cat with some waxing caused the artist to stop and think what would come next. 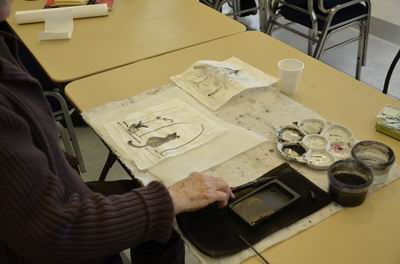 Many artists began with ideas from nature. 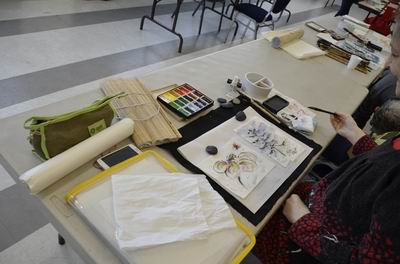 This bird found itself among batik-influenced grass blades. 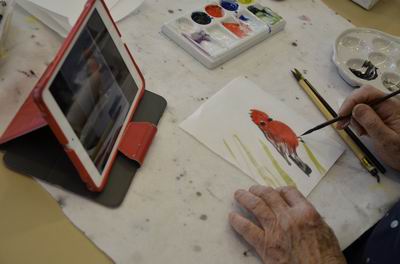 A striking design within shades of blue could be interpreted many ways. 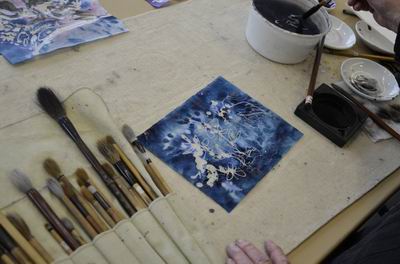 Diana Bullock displayed examples of her own work influenced by batik. 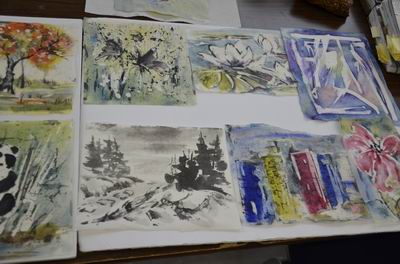 Using borders when you have completed a work with batik can tell you if it would make a good mounted work. 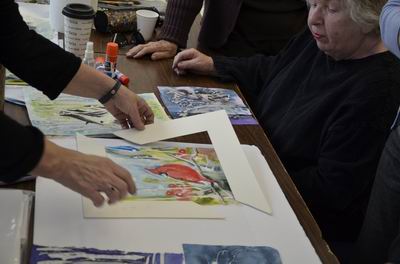 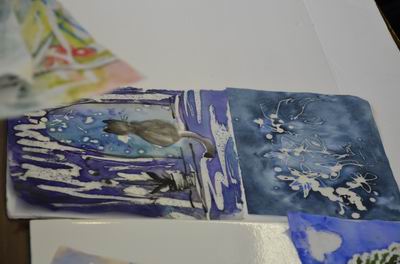 The artists shared their inventive work. 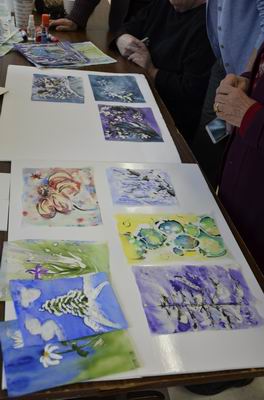 This sharing session sparked observations from around the group. 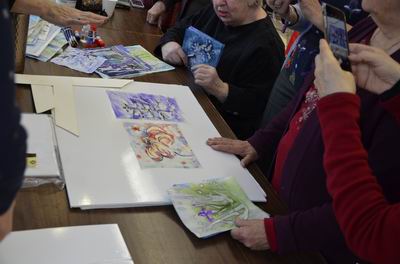