Dynamics of Composition with Elisabeth Rittinger - May 11th, 2019

Composition concerns the whole painting. How the parts are arranged and work together visually to create an effect. Understanding the structure of a painting helps artists make significant improvements in their art. Elisabeth Rittinger began her workshop by having artists examine the structure of paintings such as this landscape. 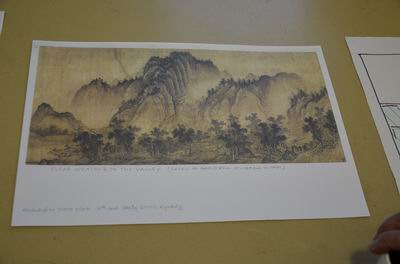 An analysis of the structure of this landscape reveals that it has mainly horizontal and vertical lines. There is not much motion in the painting. Perhaps the artist wanted to emphasize the rigidity and permanence of the mountains. 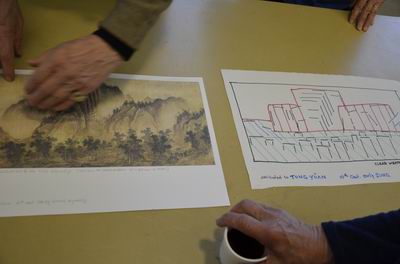 One way to analyze a painting yourself is to paint the structure you see. Focus on the lines that dominate the painting. 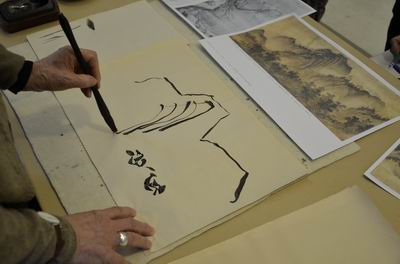 This painting of a tree on the side of a mountain has many diagonal lines when analyzed. Diagonal lines often add a type of motion to a painting and contrast with horizontal and vertical lines that are more static. 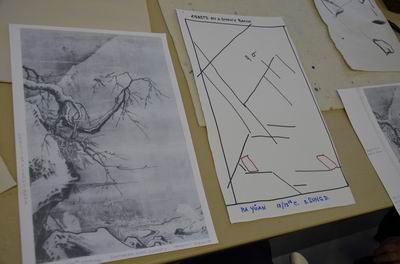 This calendar has only a few images in each month. The simplicity of fewer images makes the few images stand out in the paintings. 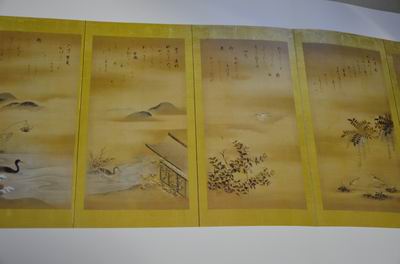 Two images, in this case some flowers in the lower left and some birds in the upper right, create an imaginary connecting line for the eye. 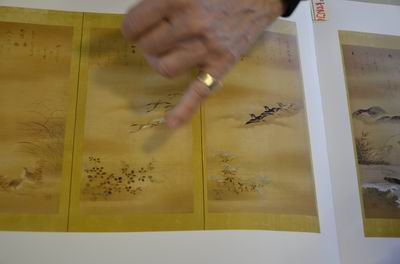 This interesting painting of a bridge has the man-made object, the bridge, in a diagonal direction in contrast to the snake-like trees and branches that seem to be almost taking over the area. Perhaps the artist wanted to show the power of nature in the long run over man's engineering. 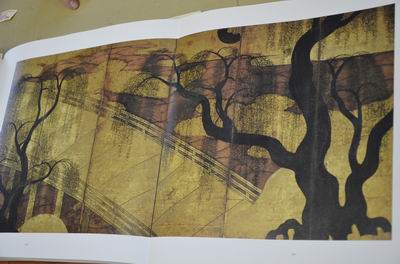 A windy day as shown by flailing branches creates a vivid scene. Note how much space is in the painting which adds to the focus on the windy condition. 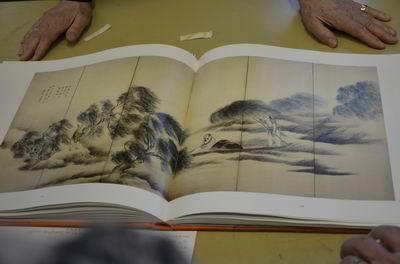 The horizontal and vertical bars of a clothes rack are offset in this painting by the curving and irregular lines of the hanging clothes. A koto (a Japanese instrument) makes an eye-catching addition. Perhaps the clothes are those of a musician. 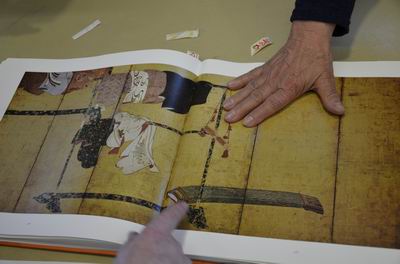 A stork flies off in a diagonal pattern amongst many vertical lines that are created by drooping branches. But note that its beak is the only horizontal line in the painting, creating a contrast that attracts the eye. 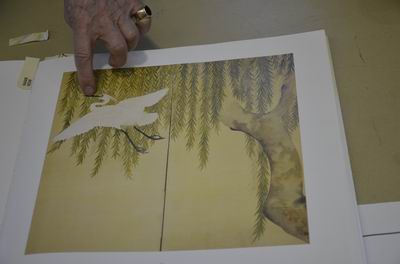 One way to clearly see the elements of composition is to cover the painting with something like this plastic bubble packaging. With this semi-transparent covering you see the structure without seeing the details. 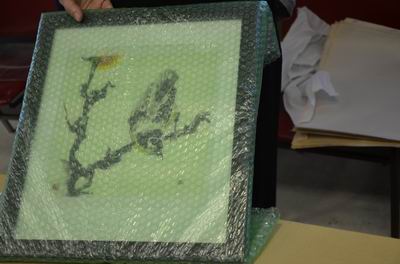 This lively, entertaining bird has its actions enhanced by the corresponding rays of the sun. Being aware of composition lets artists amplify an effect. 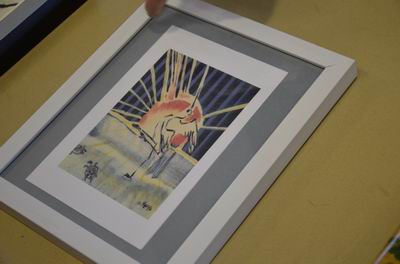 Then it was our turn to paint with a conscious effort to think of the elements in a painting and their interaction. Elisabeth Rittinger helped us with suggestions. In this painting, buildings found below some birds detract from the painting by adding details that are not necessary. 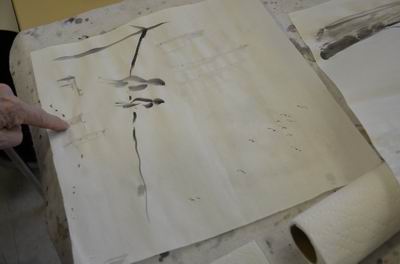 Placing a napkin over areas that might be best omitted is a way of seeing a more simplified painting. 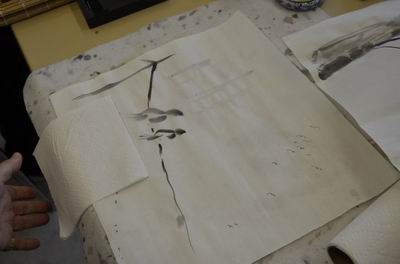 Elisabeth Rittinger also suggested making the background buildings larger and more visible to establish the environment of the city. 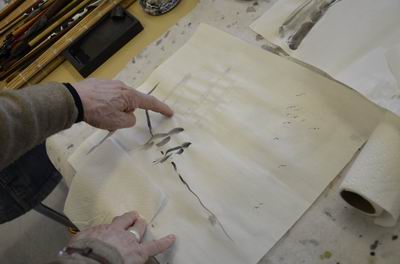 An artist painted several versions of a flying bird. 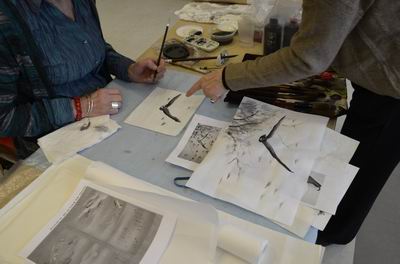 Elisabeth Rittinger suggested removing the background trees and shrubs to place more emphasis on the bird itself. 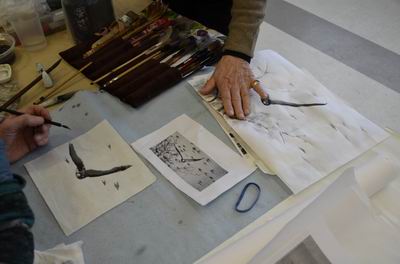 This dramatic painting of a bird before a moon could be made even better by continuing the top branch to form a well-structured background. 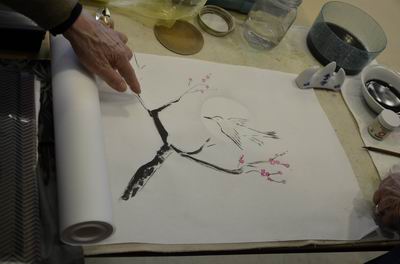 We placed our artwork on the wall to share what we learned about revising art based on studying composition. 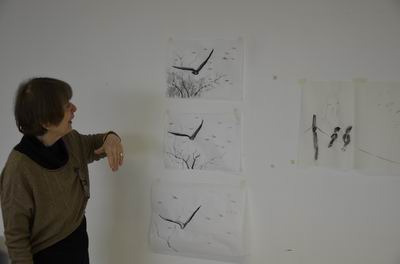 This final work of a flying bird is best as the distracting background details have been removed. 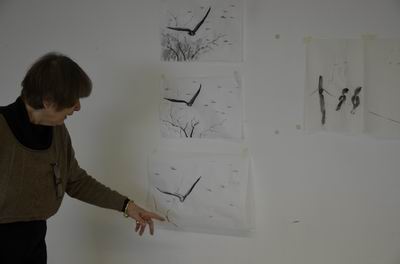 This painting of birds in a city has improved though extending the outline of buildings would make the cityscape more pronounced. 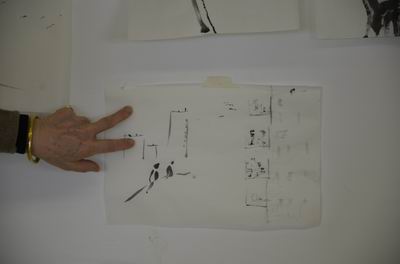 Completing this branch with another brush stroke would make the bottom third of this painting more definite. 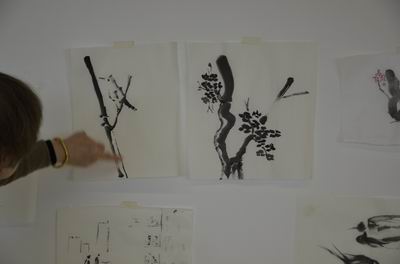 The base on this painting is quite light. 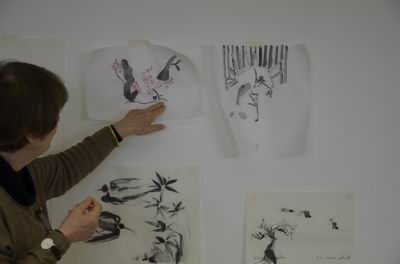 Elisabeth Rittinger suggested that adding a solid trunk to the tree would provide strength to the painting. 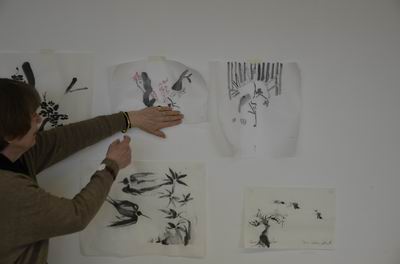 These flying birds add energy to the painting. However, the branches on the tree are too evenly balanced. Extending one of the branches creates a more natural looking tree. 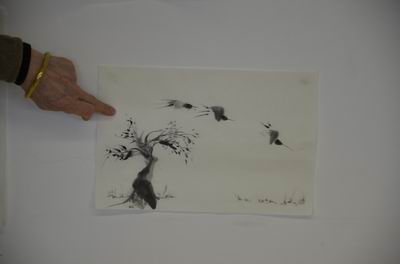