2019 is the Year of the Pig in the Chinese zodiac. Baoxing Zhang began his workshop on the pig by demonstrating the word in Chinese calligraphy. Baoxing Zhang explained that the word for house contained the word for pig inside the house, as in ancient times a home represented a house, some land and some pigs. 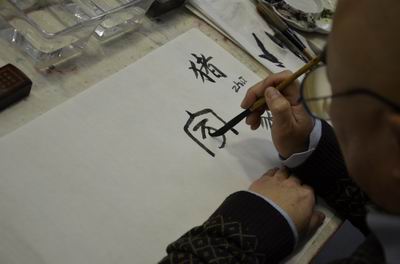 The structure of the pig depends on whether it is a farm animal or a wild pig or boar. The farm pig is round and is painted with circular brush strokes. The boar is rougher than the farm pig and the brush strokes are straight and angled. 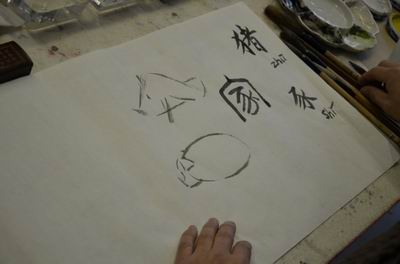 The pig painted by Boaxing Zhang was drawn using an outline of circular brush strokes. 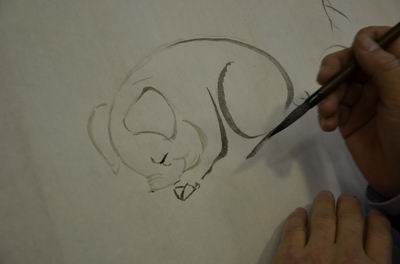 The fur is spotted. Use a large brush filled with black ink. 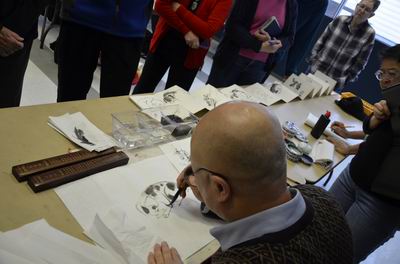 Several pigs were created. Painting some of these pigs used a few strong brush strokes leaving a more expressive interpretation of the pig. 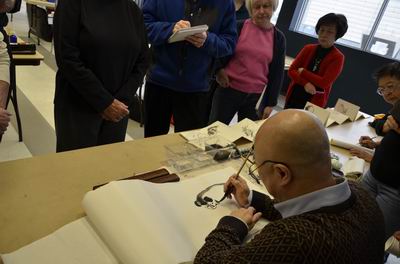 You can paint a simple pig with three circles. 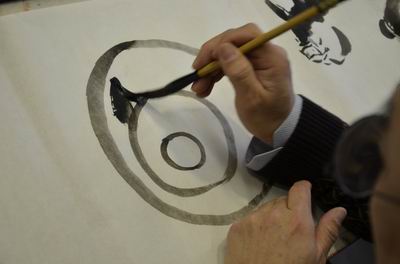 The artists had several approaches to use when painting their own pigs. 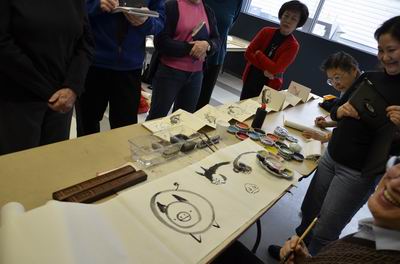 Each artist began working on his or her own pig painting with Baoxing Zhang's help. 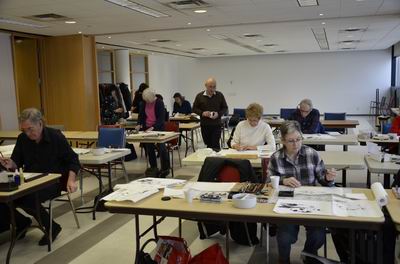 Baoxing Zhang brought many examples of the pig to help artists at the workshop. 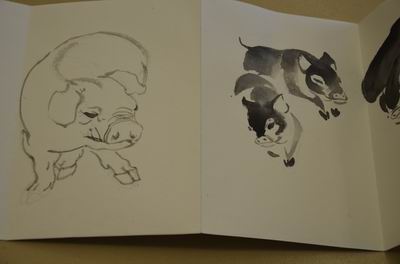 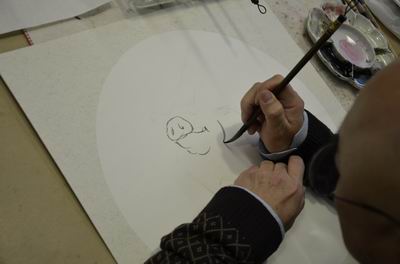 On his mounted rice paper, Baoxing Zhang first created the head of the pig and then the body. 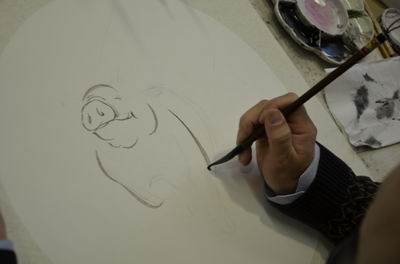 The legs were added next. 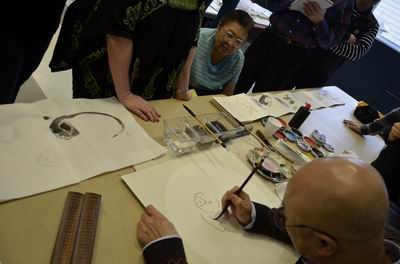 The tail is a small swirling brush stroke. 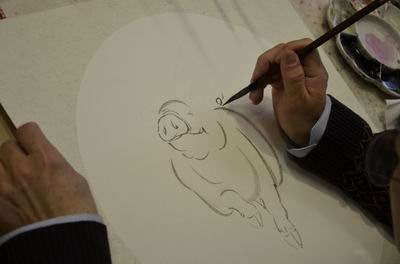 The ears on this pig were pointed. 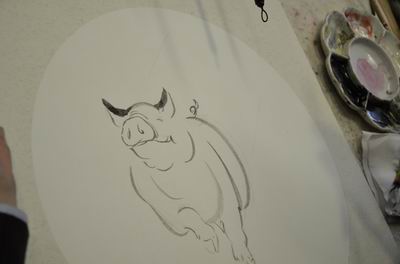 Once created, shading was added including pink colouring. 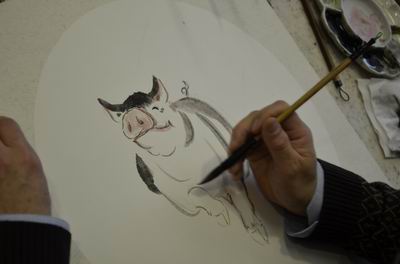 A red rectangle was painted where Baoxing Zhang would later add characters for a blessing that often is a part of a painting for the Chinese new year. 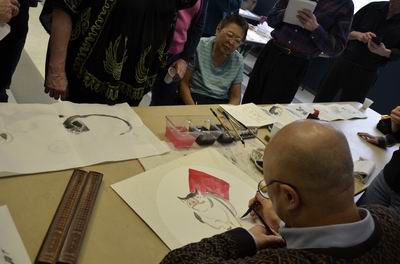 The wild pig or boar is similar to the farm pig though rougher. 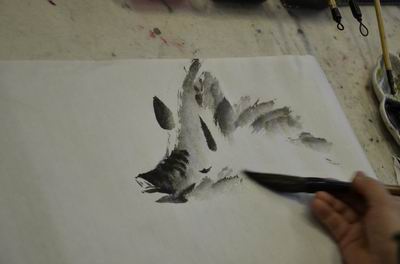 Several boars were painted using strokes with a dry brush to create the texture of roughness. 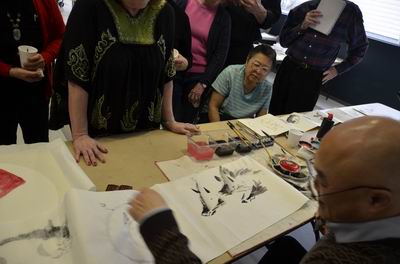 Then Baoxing Zhang added the characters for a blessing in the Year of the Pig. 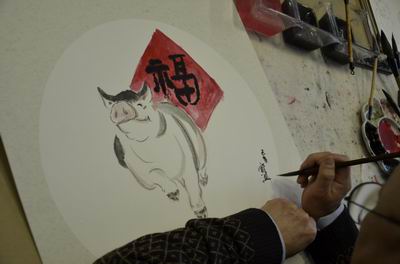 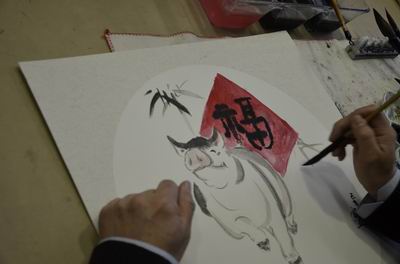 The artists returned to their paintings of the pig. 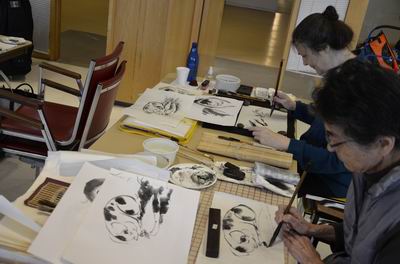 The boar also attracted their attention. 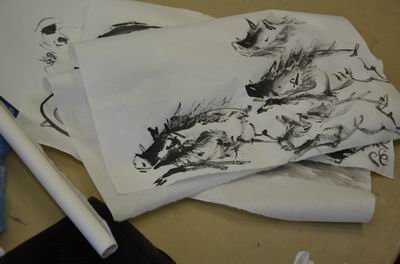 We displayed our work on a table. 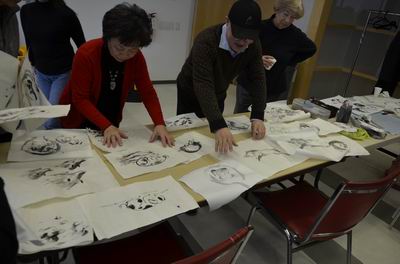 We thanked Baoxing Zhang for teaching us how to paint the pig and the boar, and explain the pig in Chinese writing and culture. 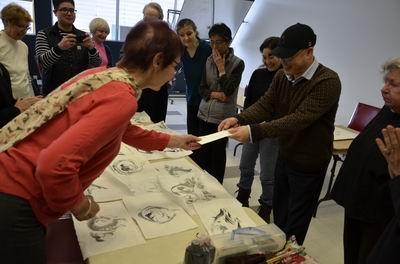 We had many paintings of our own to take home from this workshop. 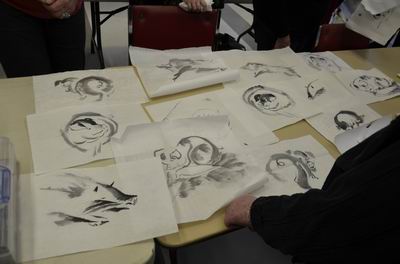 You can learn more about Baoxing Zhang in the links section.