Why paint on paper with resists such as cream or wax which change the texture of the paper? Diana Bullock suggested in her workshop that the effect can lead to more expressive art. A kind of unintended but positive surprise. 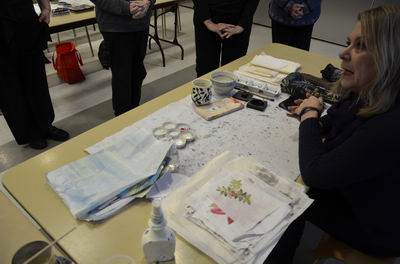 Where can you get ideas for a painting with resists? A notebook that captures ideas of the moment is a good starting point. 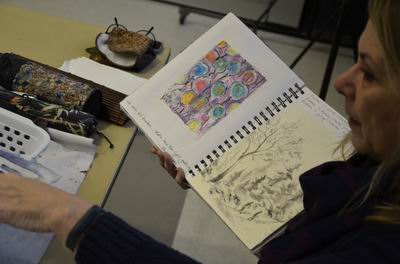 Simple items like a spray tool can quickly create a resist effect when filled with milk. 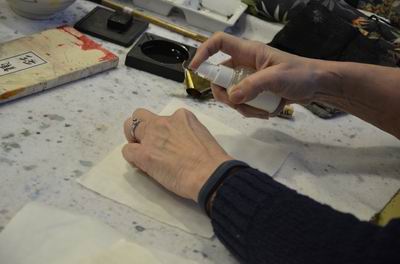 A used paintbrush can be helpful when you want a specific design with your resist material. 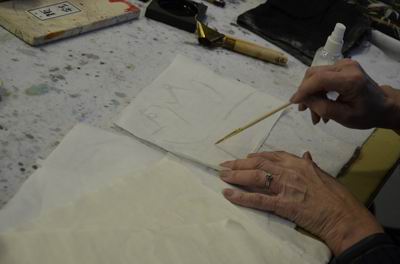 Use a syringe when you want to add blobs to your paper. 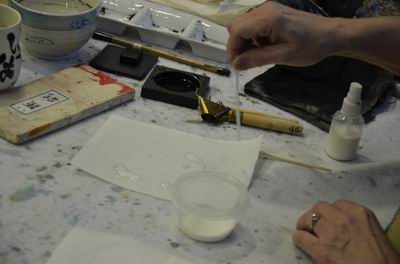 Cutouts are useful to block areas that you want left from out of an effect. 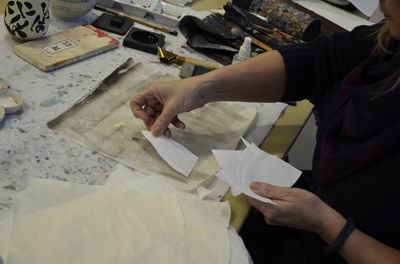 Diana Bullock began this painting by creating an outline of a flower with a resist, then used a wash over the paper. Then she began filling in the petal with red ink. 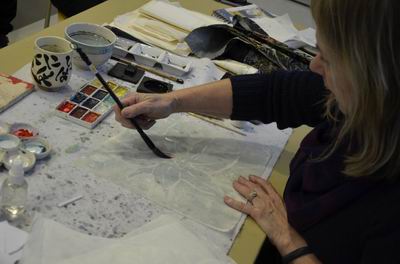 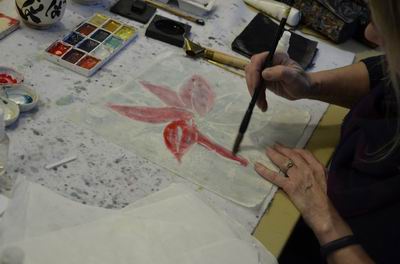 In this painting, Diana Bullock used a grey wash on paper that had a cream spray resist. Then trees were added with sumi-e ink. 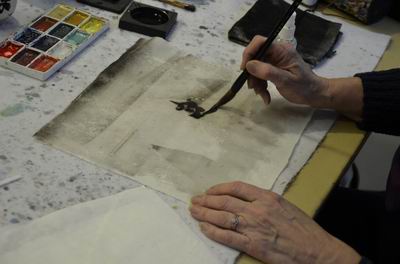 The painting turned into a forest scene. Spraying with milk or cream can create the snowflakes in a winter scene. 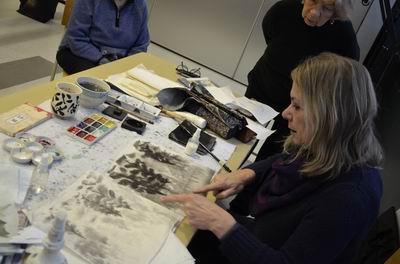 Demonstrating how to work with a wax resist, Diana Bullock first used the hake brush to add colour. 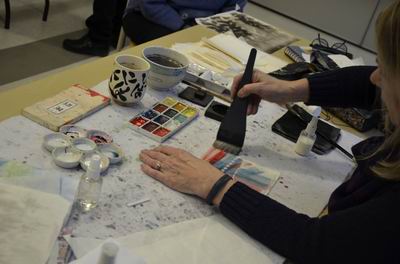 Then some sumi-e ink. 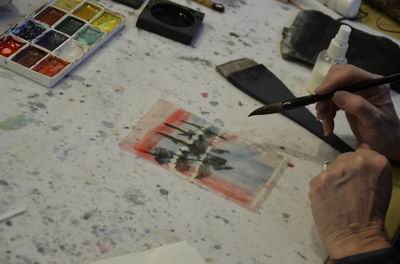 An iron came next to spread the wax. You iron between sheets of paper. 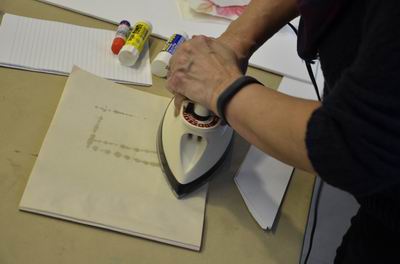 The artwork became more engaging with the beads created by the wax. Resists add a randon element into a painting that makes it more captivating. 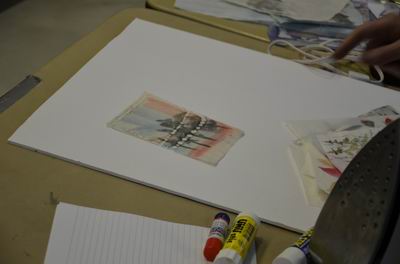 Berries added to some leaves with a cream resist makes a vivid winter seasonal painting. 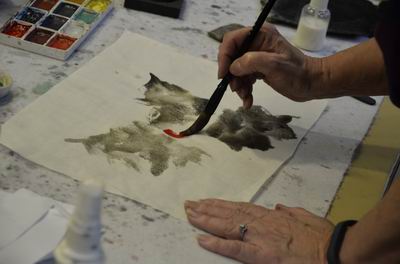 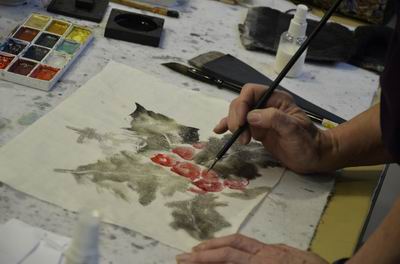 The result was a striking image. 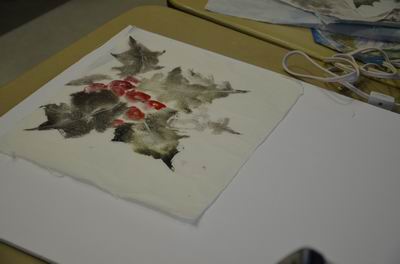 The artists at the workshop set to work on paintings with resists. Diana Bullock provided paper with cream or wax resists, or the artists could add the resists to their own paper. 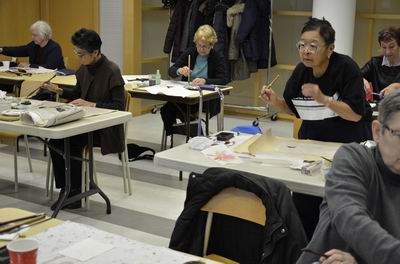 Cutouts created some undreamed of effects. 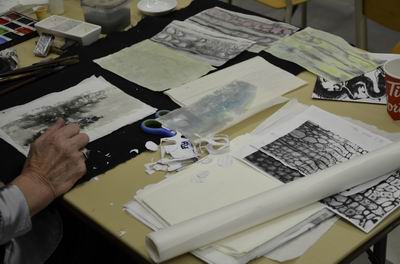 Painting a snail on paper with resist lines changed the image in an unpredictable way. 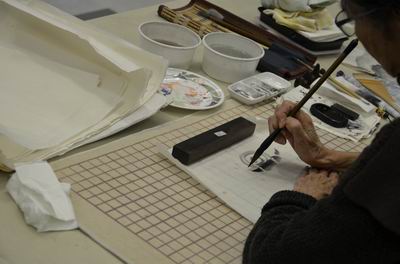 Sharing the paintings with others led to some new observations. 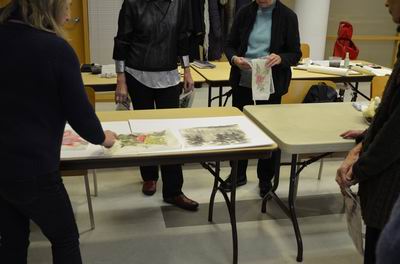 Many artists used the hake brush first to add a wash to the paper. They followed the wash with an expressive design. 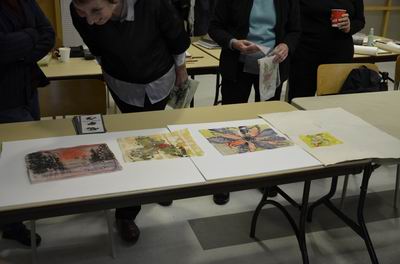 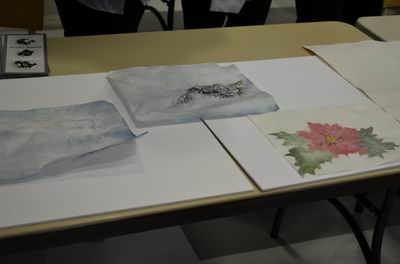 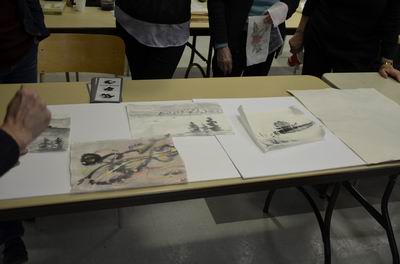 Resist lines added an aging effect to a painting of a building. Resist dots led to a cluster of vibrant flowers. 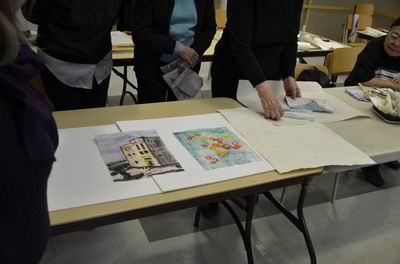