The gladiolus and peach blossom are perennial favourites as painting subjects, especially in the spring. However, painting flowers and blossoms is difficult. Ouyang Y Dong started with the petals of the gladiolus. 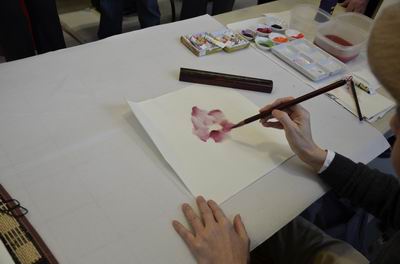 Loading the brush with a light-coloured ink yet having a tip with the darker ink is the key to getting petals with both a light and dark texture. Pressure and twists of the brush lead to expressive, yet natural looking petals. 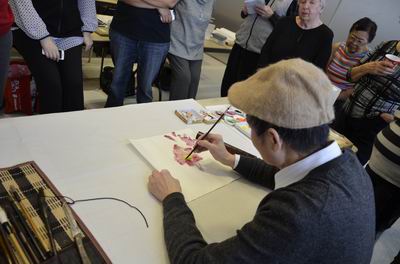 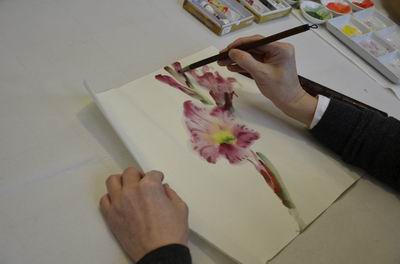 The large blades were added afterwards in a quick brush stroke. 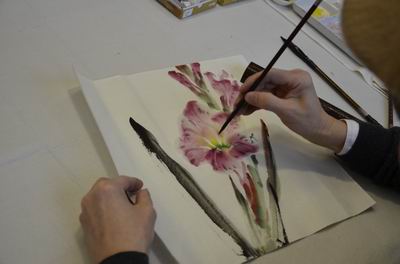 Stamens and pistil were added last. The gladiolus has both stamens and a pistil; that is, it contains male and female parts. 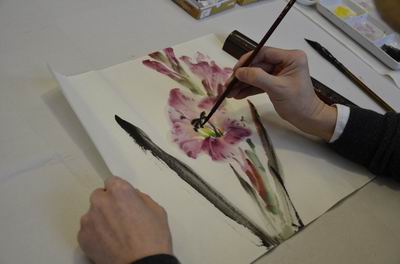 Ouyang Y Dong demonstrated how to use the brush to get the effect of an almost transparent petal by working with the side of the brush. There are six petals in the gladiolus. 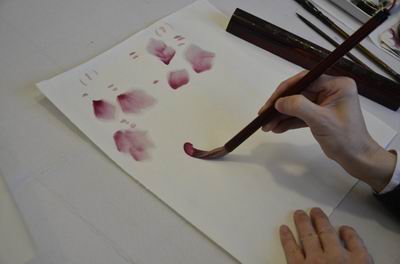 Then it was our turn to paint this delicate plant. 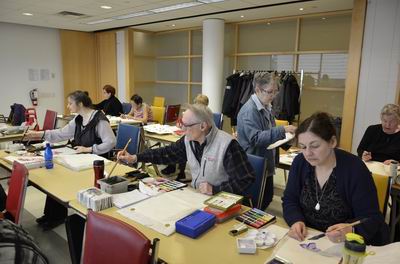 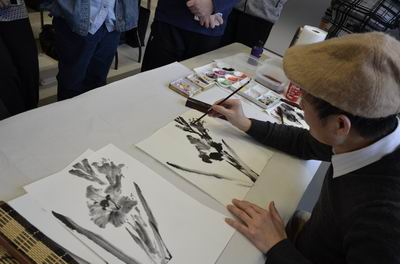 Then we tried again creating our own gladiolus flower. 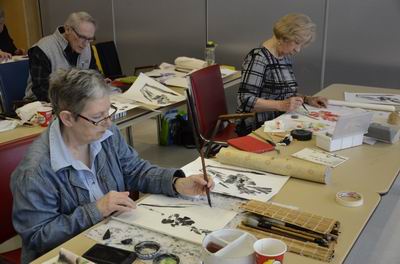 But we received some coaching from Ouyang Y Dong. 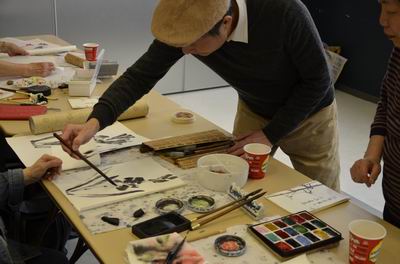 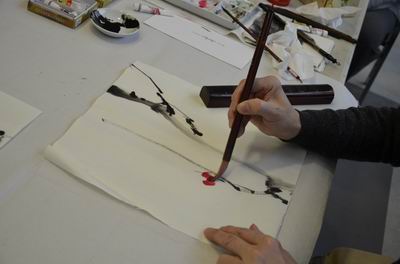 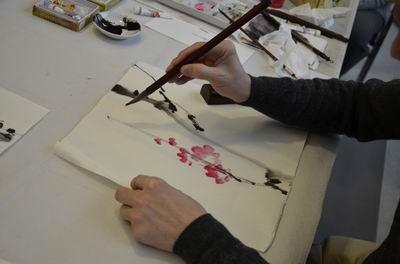 With the peach blossom, you can have petals inside the petals; that is, layers of petals. 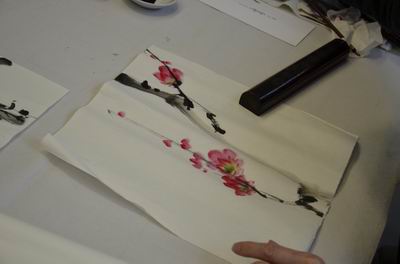 The stamens and pistil in the centre of the blossoms were added last. 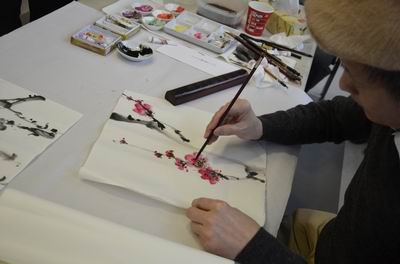 Ouyang Y Dong completed the painting by adding leaves and branches to create this striking painting. 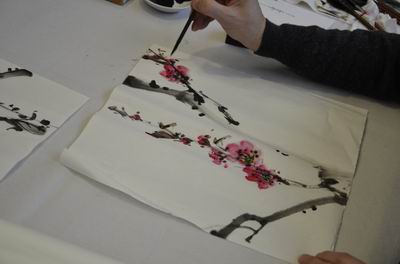 Painting the peach blossom presented another delightful challenge to the artists at the workshop. 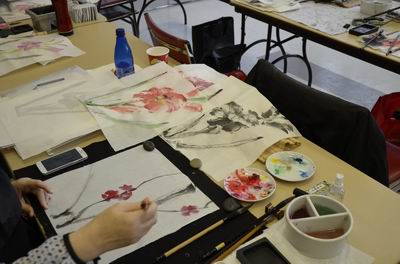 The pine tree is a symbol of longevity and steadfastness. Ouyang Y Dong also demonstrated creating a fast version of the pine tree. Pine needles were painted with a dry brush. 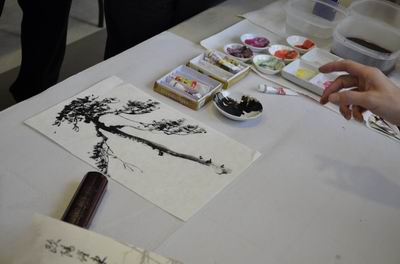 Then he created a pine tree by first drawing an outline of the trunk. 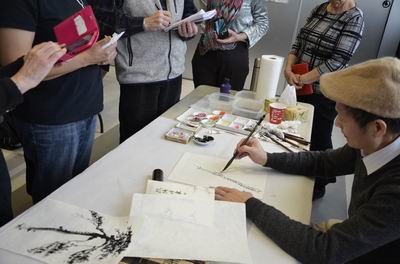 The branches followed and then the needles were added. 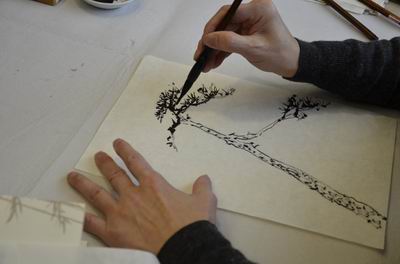 Ouyang Y Dong also painted his idea of a Canadian pine, which began with this shape. 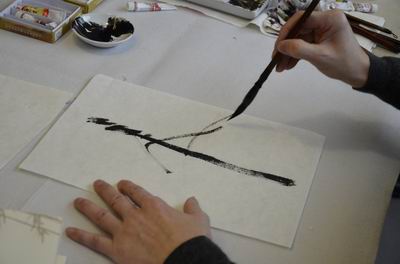 He then created an impression of the Canadian pine around the initial structure. 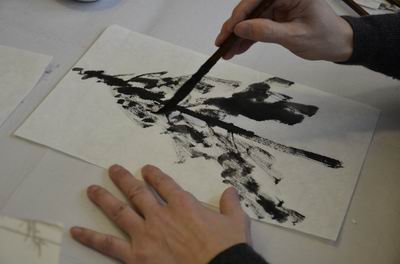 We had several pine trees to study as indicated by Mimi Yeung, who helped with some translating in this workshop. 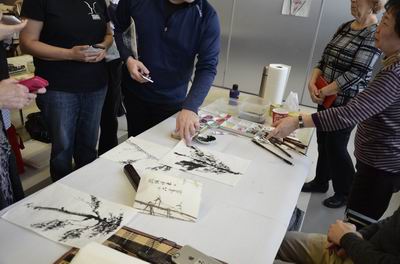 Birds are also included in many of Ouyang Y Dong's paintings. 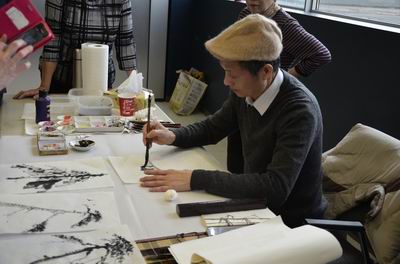 This bird on a branch had its own inquisitive character. 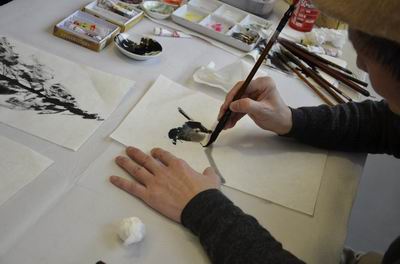 We gathered for a group photo with some of our own and some of Ouyang Y Dong's paintings. 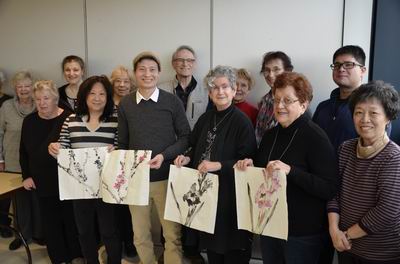 You can learn more about Ouyang y Dong in the links section.