Man's relationship with dogs is centuries old. Tien Chang began his workshop by showing one of his scrolls from the Tang dynasty (600 to 900), where a dog can be found at court. 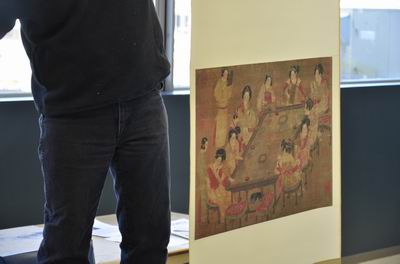 This section of the scroll shows where the dog is found: underneath the table. 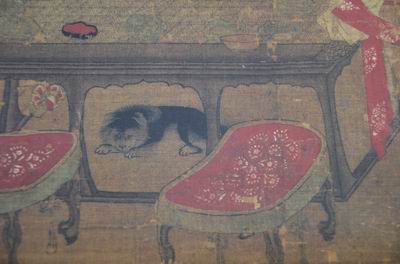 Tien Chang showed a more recent scroll from the twentieth century, which is of a dog guarding a door. 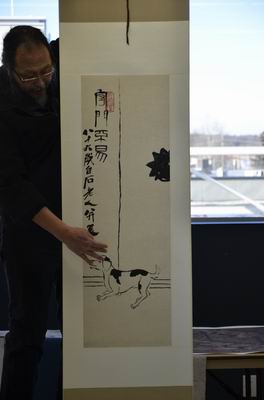 Practice your brush strokes, Tien Chang reminded the artists at the workshop. This hook stroke, for example, is often used. 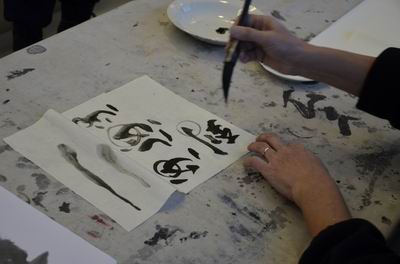 Another way of practicing brush strokes is to paint a branch with leaves. 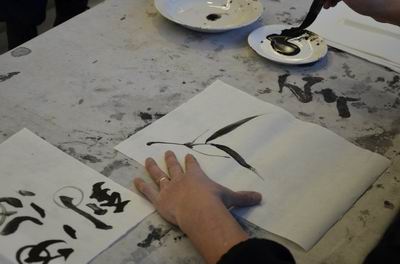 Tien Chang began this short-haired dog by painting the dark parts of the head. 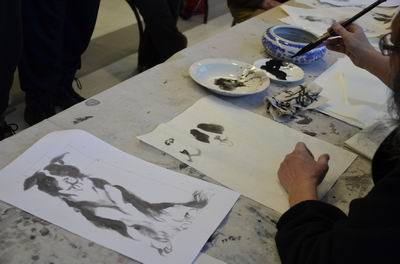 The chest of the dog followed. Tien Chang suggested that creating the structure of the dog is more important than the exact details. 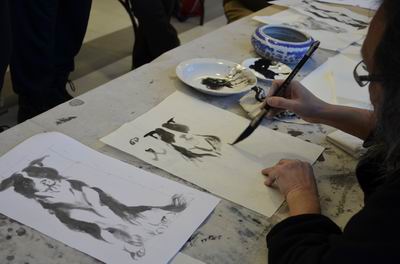 The leg extended from the chest. The key to the dog, Tien Chang said, is to have the right proportions. 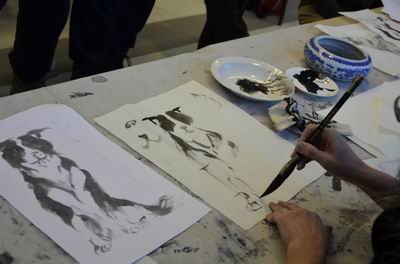 The eyes were added last. The eyes of the dog are triangular. 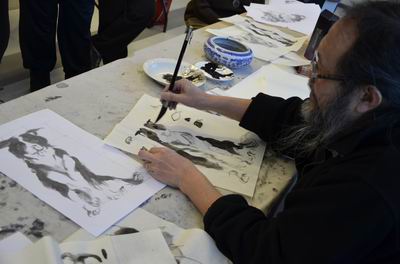 A long-hair dog is created in a similar way. When adding the nose, Tien Chang noted that there is a straight line from the tip of the nose to the skull. 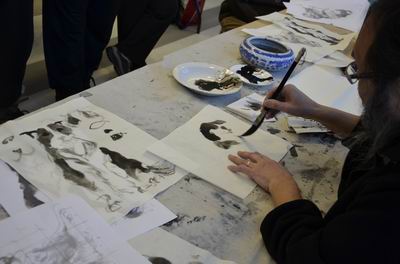 With long-hair dogs, use a brush with more ink and water. 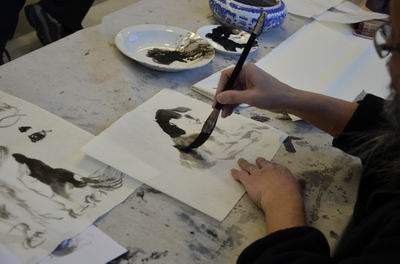 A brush with more water results in the effect of softer, longer fur. 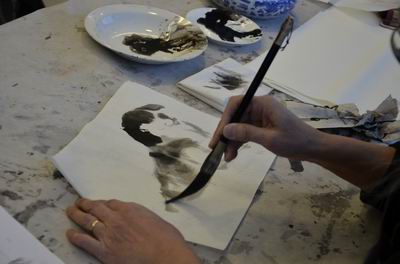 A tail was added in a contrasting darker shade. 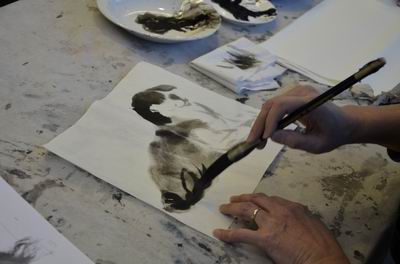 This dog in a sitting position was filled out with darker brush strokes. Tien Chang suggested to the artists to start with a lighter grey shade and then add the blacker, bolder brush strokes later. 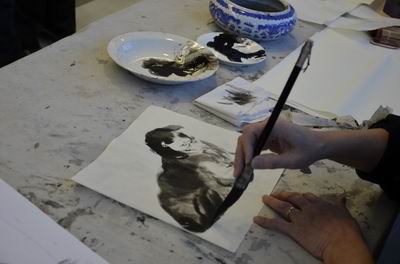 Then it was our turn to create our own dogs. 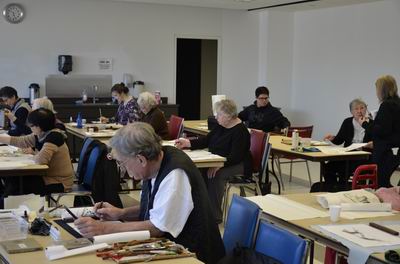 We did have some further guidance from Tien Chang's paintings such as this running greyhound. 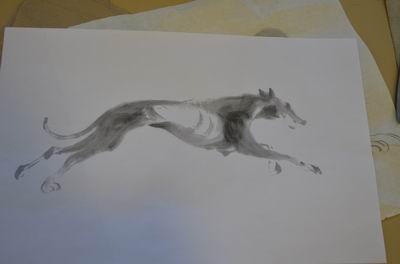 This boxer was another painting to study. In all of Tien Chang's dogs, he used the sumi-e ink to effectively create the light and dark parts of the dog's fur. 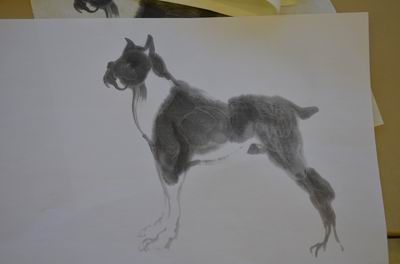 The dog is a subject that attracts artists because it is one of the animals that is closest to us. 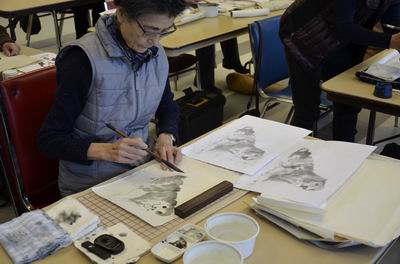 The greyhound dog in motion interested many artists. Tien Chang noted that each type of dog has its own characteristics. 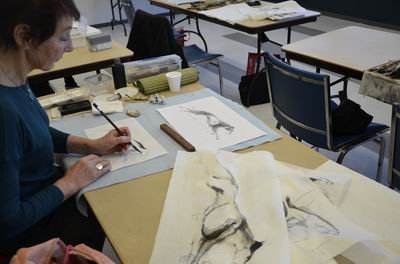 We did get some special coaching from Tien Chang. 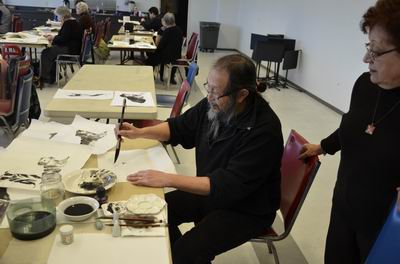 The artists painted some creative dogs. 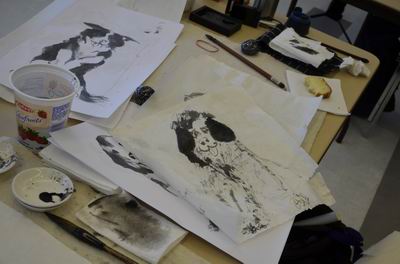 Painting a dog seems sometimes to be painting a personality. 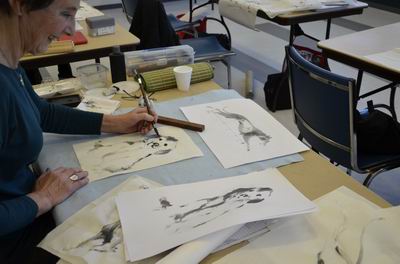 We had a show-and-tell session for our dogs. A kind of dog show. 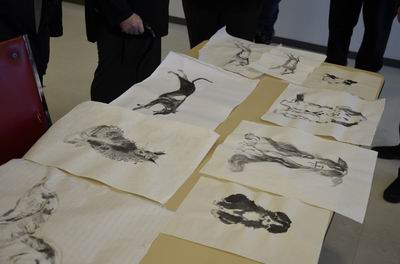 Everyone's dog was a winner in this show.

Tien Chang ended his workshop with calligraphy, which he finds closely related to painting. This writing is from a famous old Chinese saying: to broaden your view, you must look from a higher level. 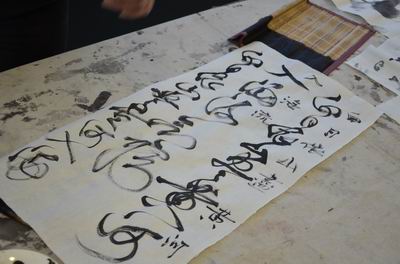 We left this workshop with a new appreciation for our dogs.