Penguins, with their contrasting black and white colours, are ideally suited for a sumi-e painting workshop. Penguins also are a universally attractive subject. Penguins display a playfulness that fascinates artists. Diana Bullock began her workshop with a look at some of her penguin-influenced works such as an abstract that includes some penguins. 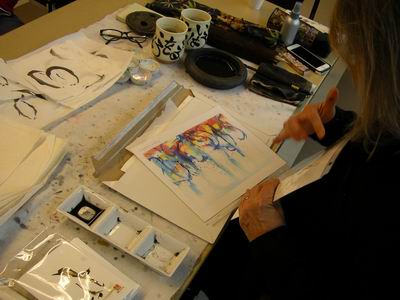 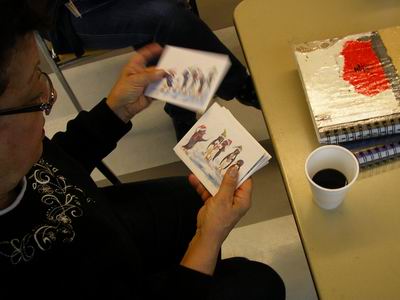 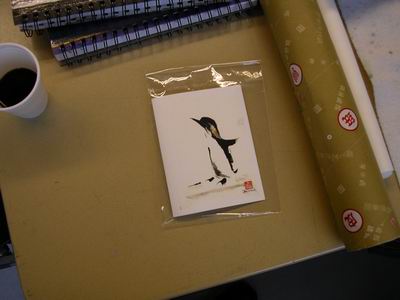 To begin a basic penguin think of its proportions and paint a flipper (or wing) in a single brush stroke. 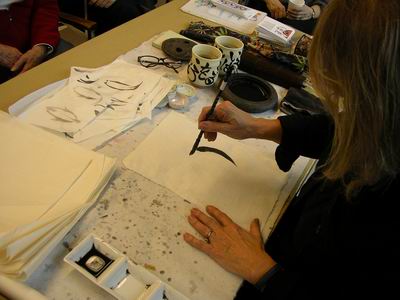 Add the other flipper. 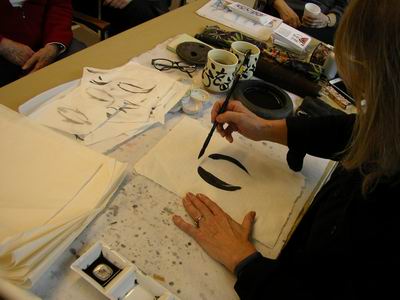 Diana Bullock next added the head. You can create the head in a similar brush stroke to painting a leaf. 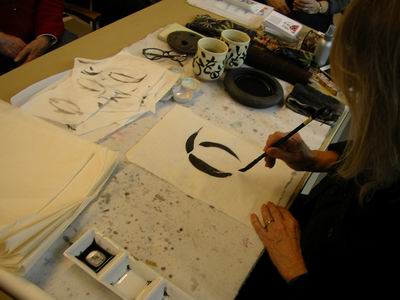 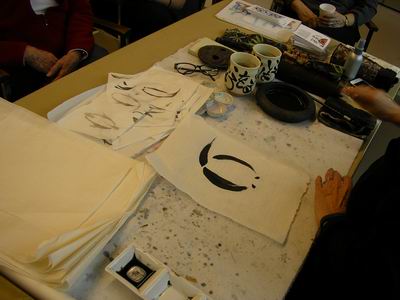 The eye can be added with white paint afterwards. 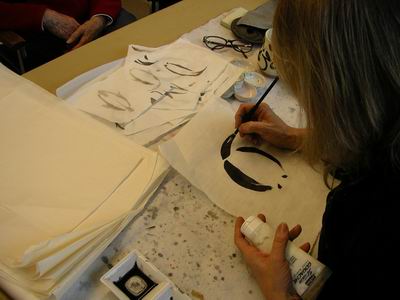 Penguins are often painted in groups with heads pointed in various directions. 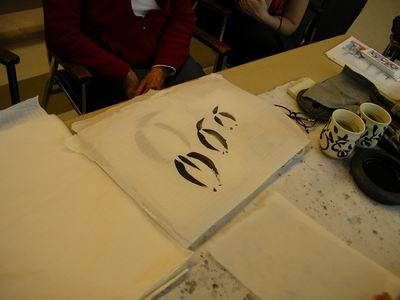 There are a variety of penguins and most have some colouring especially near the head and chest. 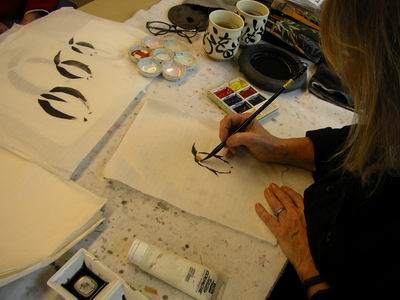 A side view of a penguin lets you add more individual characteristics to this bird. 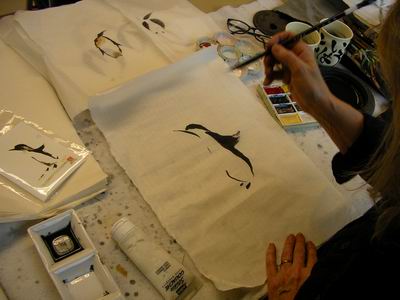 The many ways of tilting the head in postures known to penguins were demonstrated by Diana Bullock. 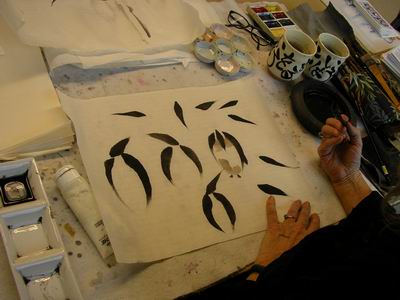 Pictures of penguins find their way into the notebooks that Diana Bullock keeps. These notebooks are a way of exploring visual ideas. She suggested all artists keep such notebooks for capturing ideas. 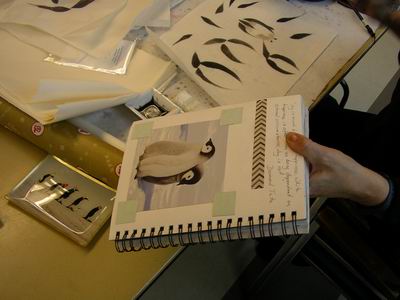 Then it was our turn with some tips from Diana Bullock as we created our own penguins. 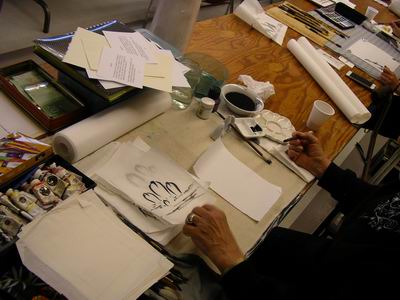 Penguins seem to encourage artists to give them personalities. 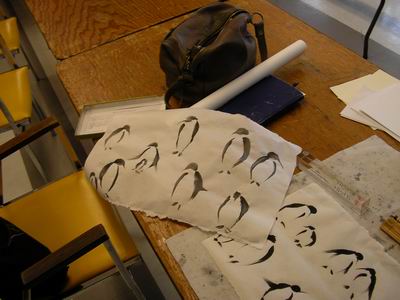 In the second half of the workshop, Diana Bullock showed how to mount smaller paintings on wood boxes that can be bought at art stores. Begin with gesso on the wood block and then add an acrylic medium in a matte or glossy finish. Use a half strength medium mixture; that is, half water and half medium. Then add your art work and add the medium over top of your art. To spread the medium out over the art, use wax paper to prevent the paper with your art from tearing. 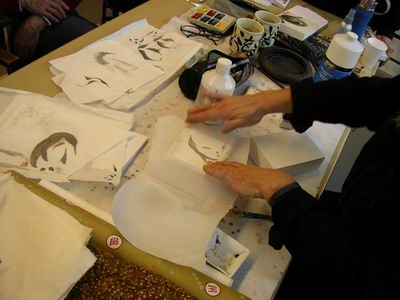 The result when dry is a saleable work of art. You can cut the excess paper off with an xacto knife. 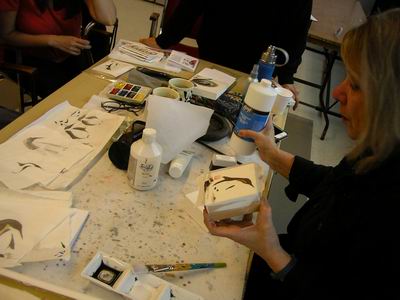 Cards are another place suitable for a penguin image. Use acid free glue when pasting your art to a card. 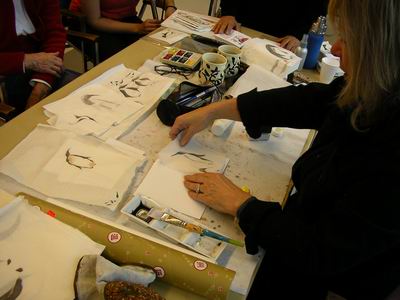 Etegami, where images and words are used to create cards or booklets, is also suitable for your penguin creations. 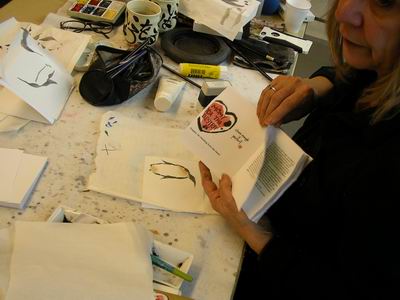 If you paint a penguin that you really like, consider creating a digital image of it. Then create a set of cards with your image. Diana Bullock advised that you add your contact information to the back of the card. 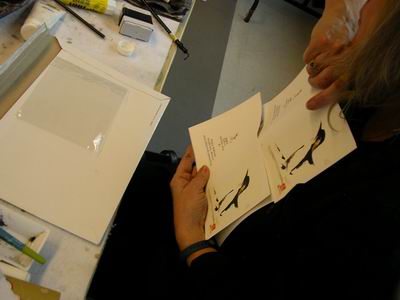 Diana Bullock provided instructions on how to put a scanned image on to either a horizontal or vertical card. You only need basic computer equipment. 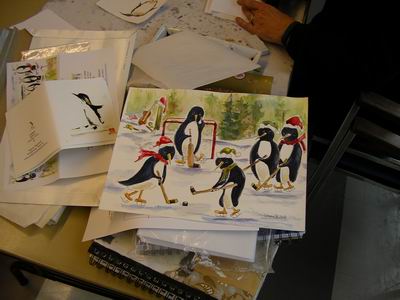 We had a show-and-tell session to share our penquin experience. 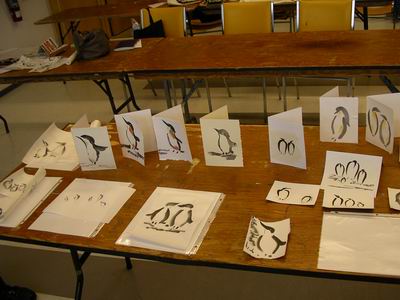 Painting penguins is a lot of fun. Penguins seem to encourage the expressiveness of artists. 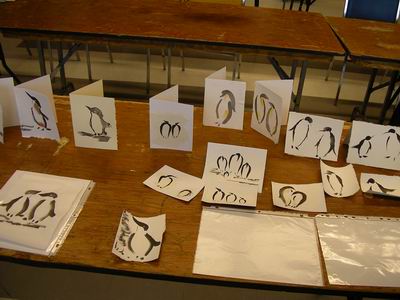 In wrapping up, Diana Bullock used one of her favourite touch up tools, a sumi-e ink brush pen, to paint the standard penguin patterns. 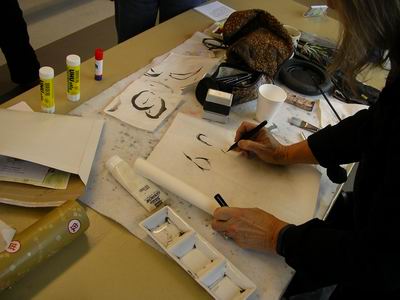 When two penguins have heads crossed, it is often because they are looking after a chick. 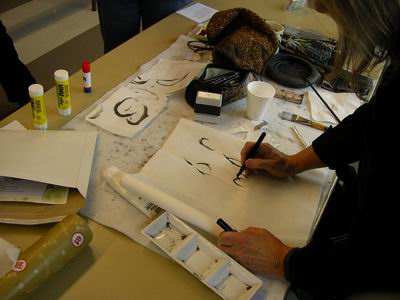