Everyone is fascinated by art. This year's exhibition of oriental art by the Sumi-e Artists of Canada remained as popular as ever. 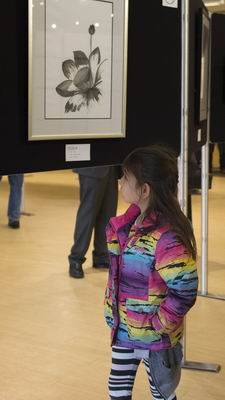 Oriental art lovers come from all cultures and backgrounds to see this unique show each year. 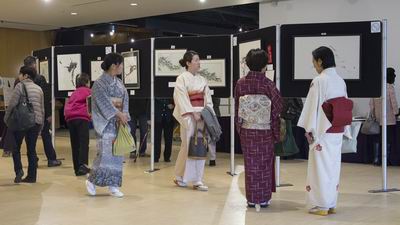 Over 80 paintings captured their interest and sparked lots of discussion. 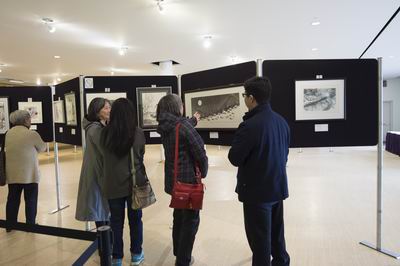 The entrance with ikebana by Betty Lou Arai and sign by Roslyn Levin attracted those coming for the show or coming for their interest in Japanese culture at the Japanese Canadian Cultural Centre. 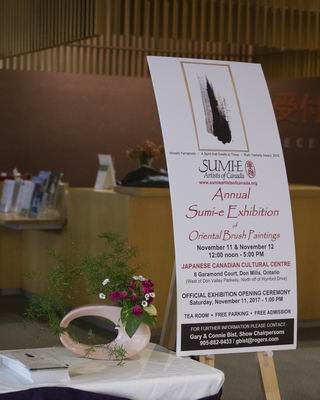 Once inside, the visitors found many paintings to study. 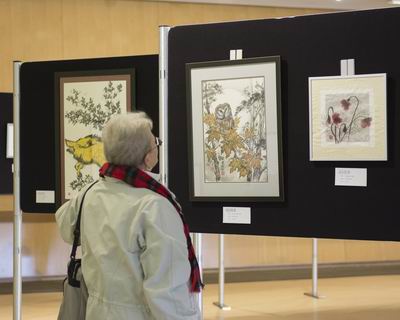 The Ruth Yamada award for a work that demonstrates originality, spontaneity and technical skill in a sumi-e painting was given to Roslyn Levin for her painting Through High Grass. Mimi Yeung, our judge, had these comments.

Speed, movement and force are so well captured here. The grass slope is casually done but leaves no doubt. 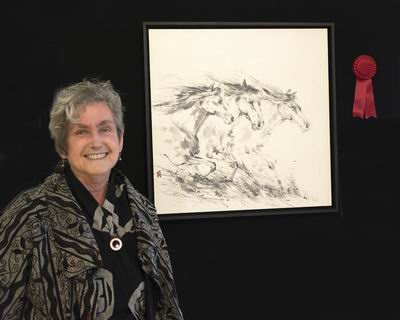 Three Bees a Buzzin by Diana Bullock received an honourable mention from Mimi Yeung with these comments.

The three bees and the two flowers are such gracious company to each other. A pleasurable scene on a summer's day. 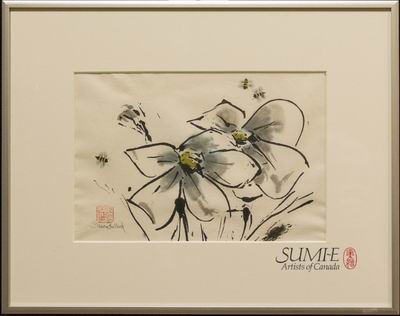 Steel structure is hard to present in ink. Robert did it well. The quiet background is a good contrast to the hard, solid structure. 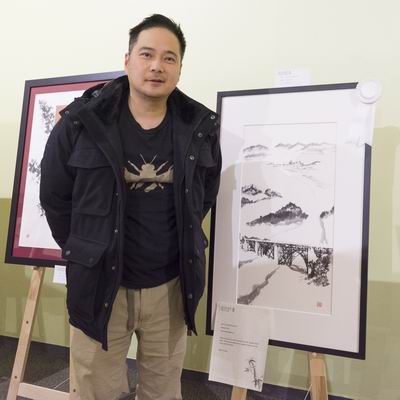 An honourable mention for Winter in Canada by Barb Laplante had these comments.

Winter in Canada - the thickness of the the snow is striking. Very good perspective. 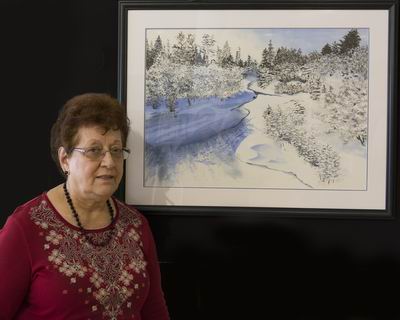 Beautiful midnight scene. The various tones of ink are well applied and the strokes are well controlled. The world is at peace. 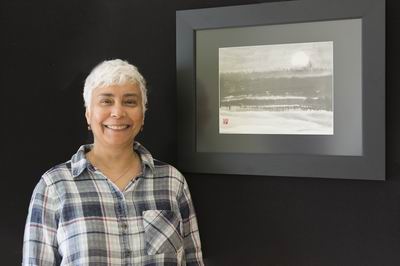 So much energy and will in the pods. Life does not end yet. 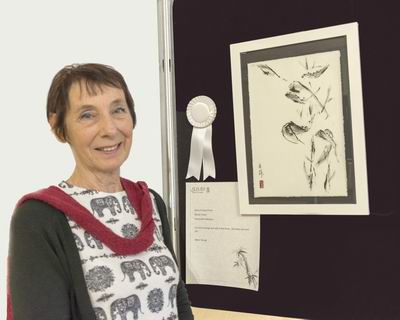 Families found themselves drawn to these paintings, where the comments were posted, and many others. 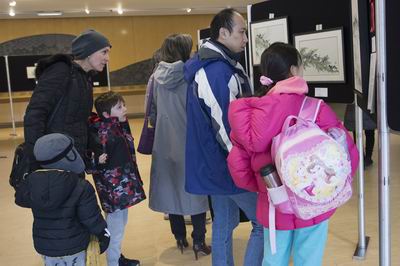 They also looked at cards which, like most of the paintings, were also for sale. 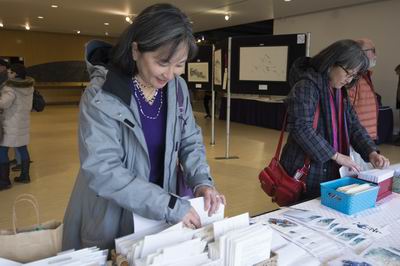 In our tea room, they stopped by with friends for sushi. 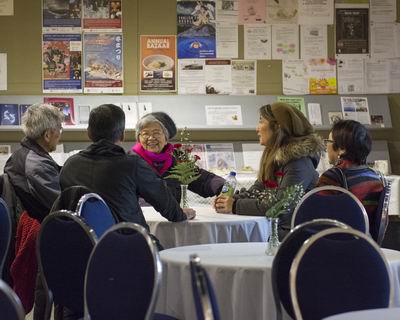 Hidden amongst the variety of subjects were some whimsical paintings like this owl, whose wisdom comes through Internet searches. 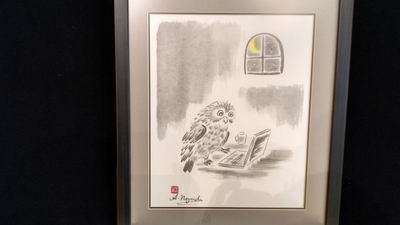 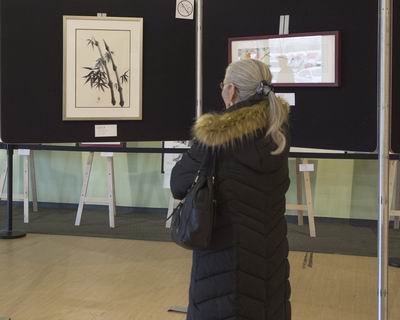 The paintings made some stop and contemplate, and made some analyze and discuss. 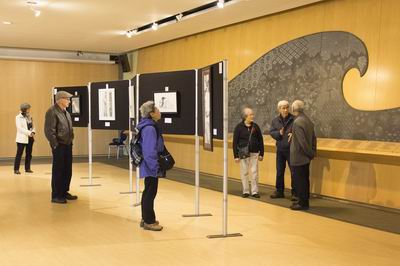 Some paintings have a special meaning to onlookers. 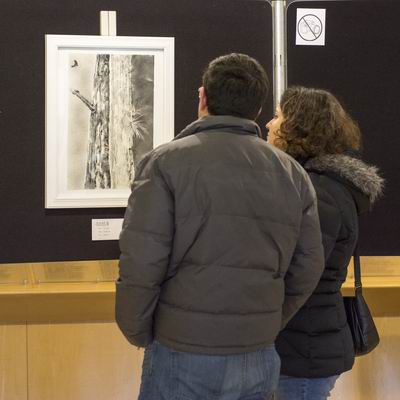 Takako Ito, the Consul-General of Japan, spent an hour with these sumi-e paintings, an old Japanese art that she is very familiar with. She is shown with Gary Bist, President of the Sumi-e Artists of Canada. 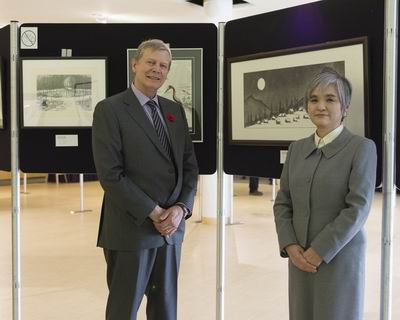 All ages enjoyed the demonstrations. 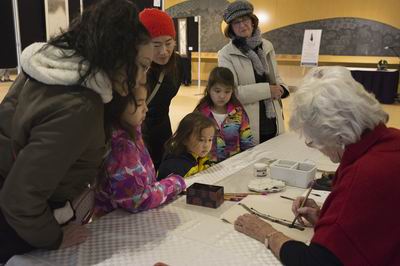 It's amazing how this art can take place in a few minutes before your eyes. 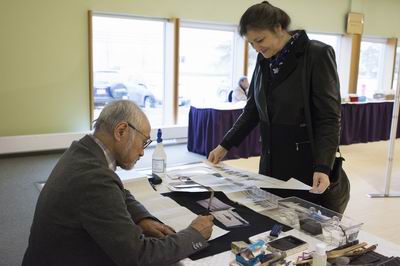 Such as this Canadian winter scene by Hiroshi Yamamoto. 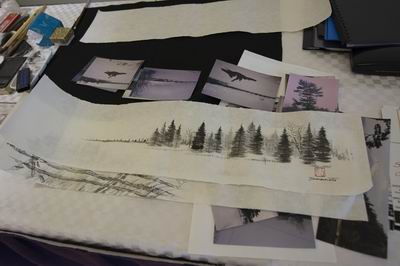 Many people were mesmerized by this year's paintings. 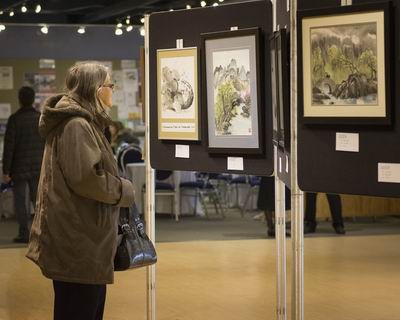 Sometimes people were left figuring out exactly what the artist was trying to say to them. 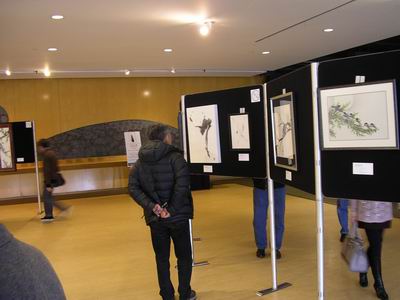 Groups meet each year at this show and usually end up planning to return the next year. 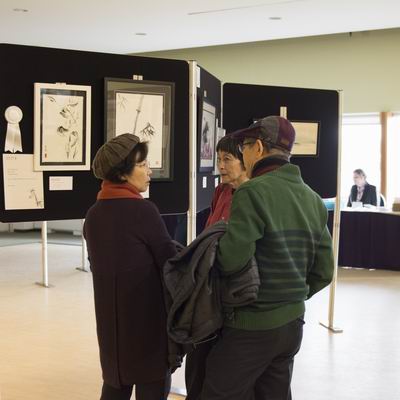 Time to get back to our painting!