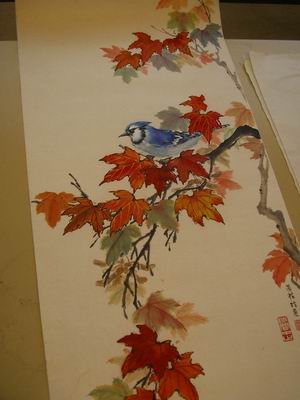 The maple leaf has five points. To paint the leaf, put the tip of your brush at the point and then lay the rest of your brush towards the centre of the leaf. 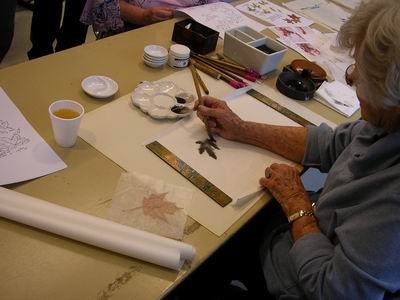 The veins are added by a fine, pointed brush. 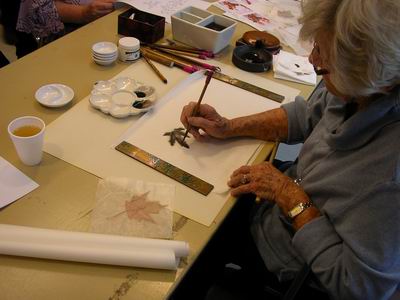 Moira Mudie added a second leaf. Leaves should be created in clusters as they are in nature. 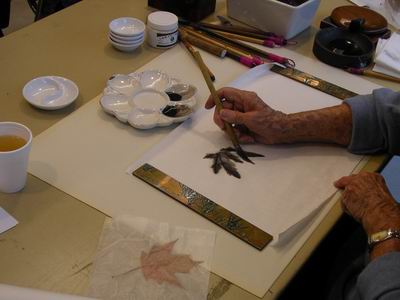 The result was a natural-looking cluster of one leaf over another. 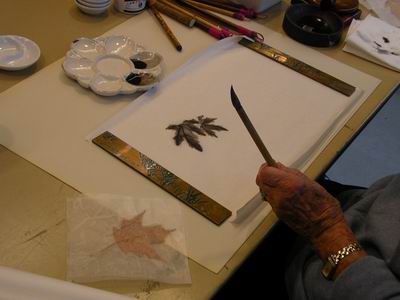 In the fall, maple leaves appear in many colours: golds, reds, browns, and greens. Moira Mudie suggested using colours from tubes which creates a more vibrant effect on the paper. Mixing these colours gives you a range of colours and tones for a fall painting. 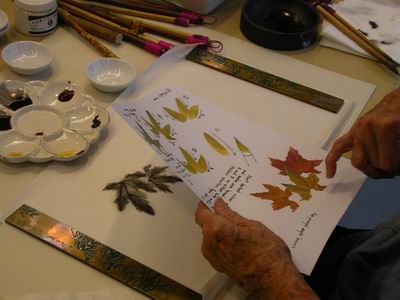 You create a coloured leaf using the same brush stroke. 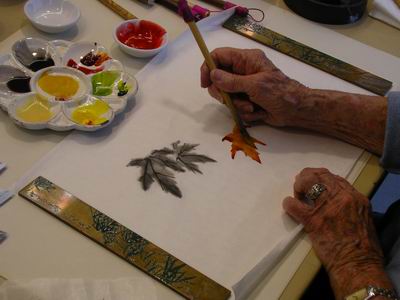 These leaves - red, gold and green - could be found on many trees in the fall. 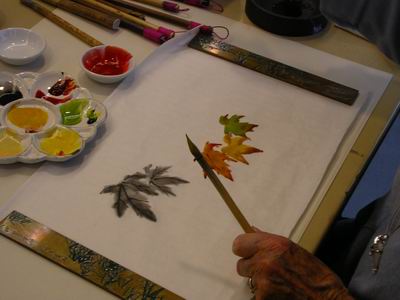 The veins are added in the same way as demonstrated earlier. Be careful about making leaves or veins too ordered and exact, Moira Mudie cautioned. 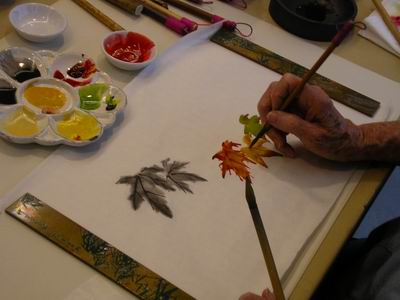 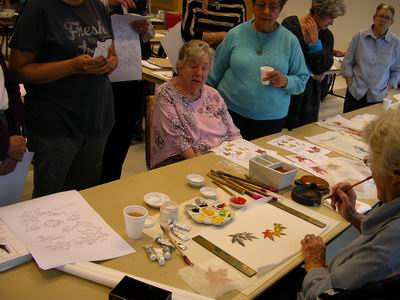 The edges of the leaves are slightly jagged which Moira Mudie achieved with a pointed brush and a drier edged brush. Leaves in the fall are more brittle unlike the softer leaves of the spring. 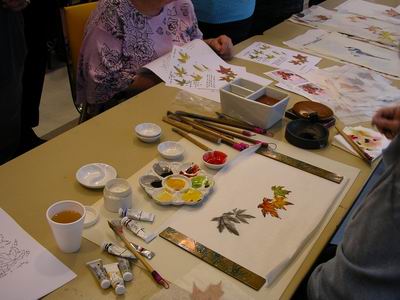 Then it was our turn. Moira Mudie brought many photocopies with tips to help us out. 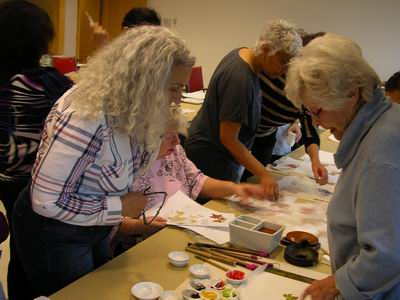 The artists at the workshop did get some help from Moira Mudie. 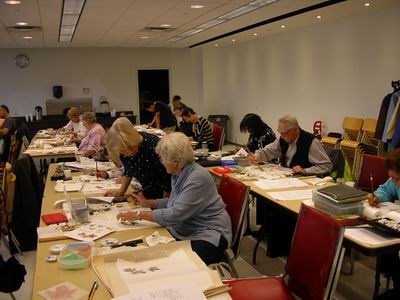 Focusing on the brush stroke starting from the point of the leaf in towards the center of the leaf is the key. 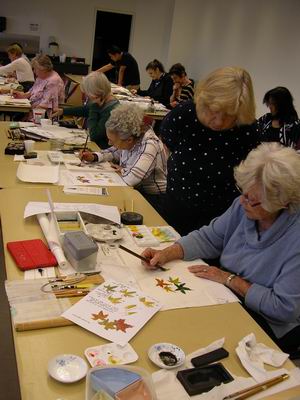 For the blue jay, begin by thinking of its structure and proportions. The upper beak is slightly rounded. 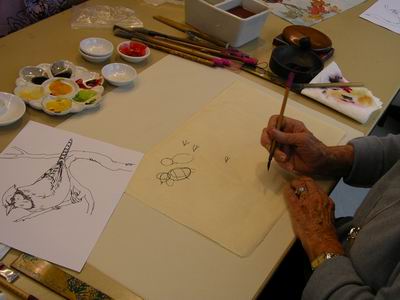 Blue and white are the dominant colours of the blue jay. 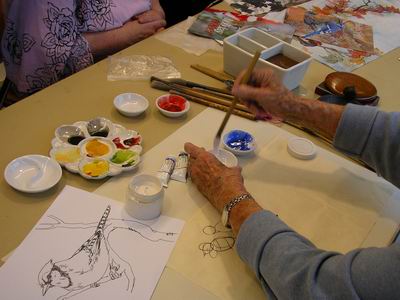 Begin with the head including the crest at the back of the head. 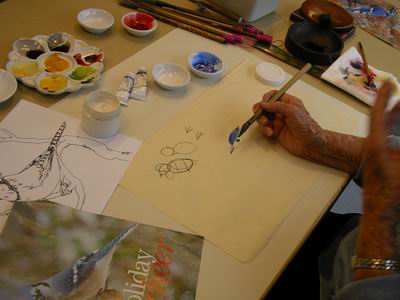 Then turn to the body keeping the proportion correct. As with the leaves, the bird is not precisely presented; its head and body may be slightly twisted or on an angle. 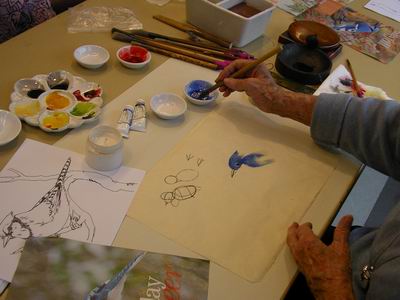 The blue jay is not uniformly blue. Moira Mudie reminded the artists that there are other colours like black and white that make the bird more noticeable. 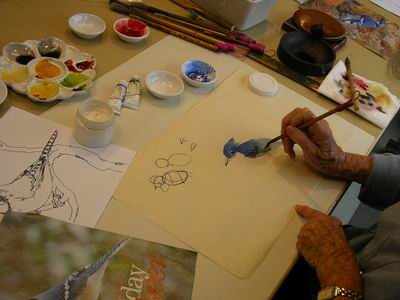 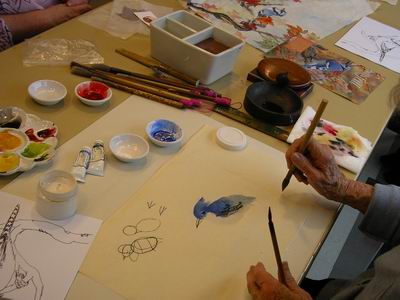 The long tail feathers were added next. 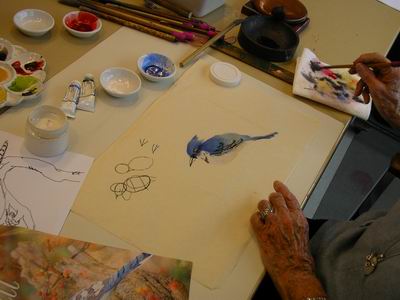 Then Moira Mudie added details that accented parts of the blue jay such as white around the eye, white on the upper wing, and black ink on the edges of the feathers on the wing and belly. 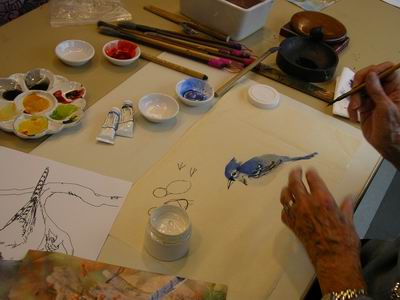 More black ink better defined the blue jay and made it stand out on the paper. Also, some yellow colouring can be found near the throat and on the belly. 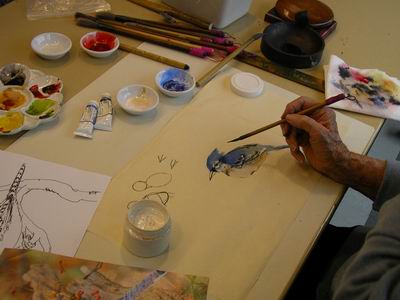 The talons or feet of the blue jay were created and, if this painting were continued, would be wrapped on a branch. The talons have one claw at the back and the others at the front. 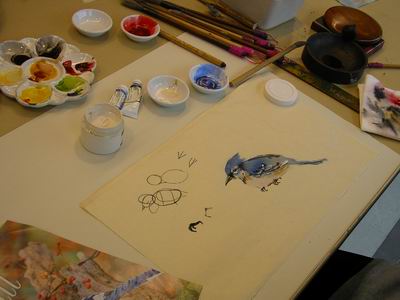 We were all set to spend time creating our own blue jays in the second half of the workshop. 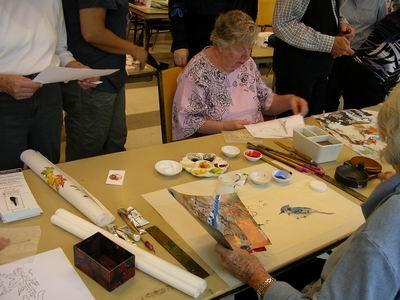