The graduation ceremony is a unique day when hard-working artists receive their seal after several years of study. It is a reminder of how many great Canadian artists we continue to develop each year in the oriental art tradition. Left-to-right, our graduates this year are: Robert Choi, Dianne Blake, Carol Lee, Stephen Albrecht, and Claudia Chan Garcia. 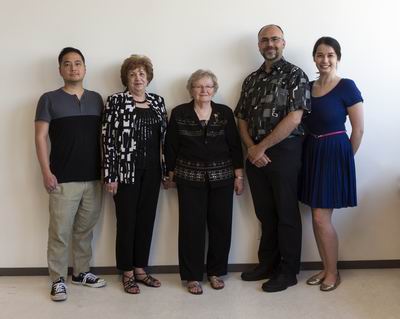 This ceremony attracts Sumi-e Artists of Canada members and family and friends of the artists graduating. Everyone comes for the same reason: to see the art. Reaching the level of receiving a seal takes several years of painting and, as shown in these paintings, demonstrates a high level of proficiency. 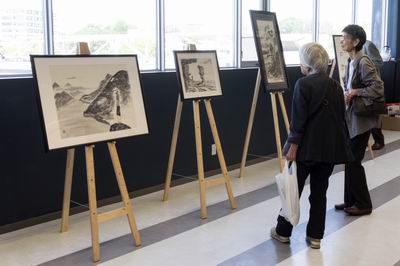 A seal is a small red icon that you find on oriental paintings. Each seal is hand carved and unique. Similar to a signature, it is a few words in Japanese or Chinese characters that represent the artist. The instructor who gives the seal, selects a seal that he believes best represents the artist. Gary Bist, president of the Sumi-e Artists of Canada, showed a panel containing imprints of the seals. 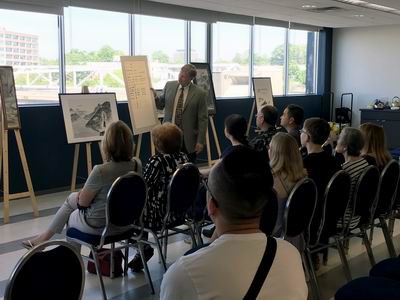 What attracted Roslyn Levin, a well-known instructor and artist, to this style of painting? Simplicity. With a few brush strokes, you can convey great meaning in a painting. However, getting to the point where you can express yourself with that simplicity takes time. That means that practicing and learning in this art never ends. 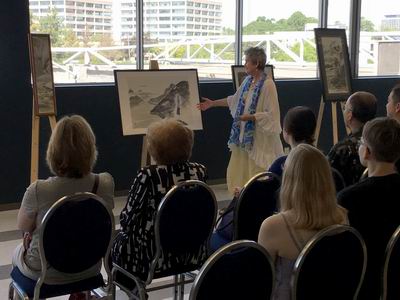 Dianne Blake has been a student of Baoxing Zhang's for several years. Her set of landscape paintings, one for each season, contain a wide range of natural features - mountains, trees, streams and waterfalls - shown in four settings. The power of nature shines through in each painting. 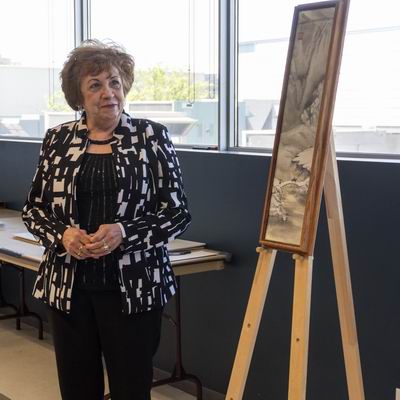 This winter painting contrasts the progress of two small people against a dominant winter scene. The overwhelming power of nature is very evident in her painting. Dianne Blake's other three paintings were also on display at the graduation ceremony.

A photo caught the eye of Claudia Chan Garcia and became the basis of her painting. Though landscapes attract artists, this painting is around another person watching the landscape. A kind of painting within a painting. 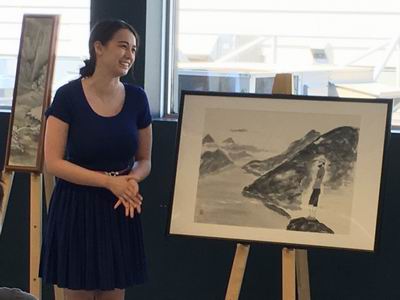 Is this man contemplating the very Canadian scene before him? Or perhaps musing on something else? Because Claudia Chan Garcia separated the person with some white space about him and placed him right up front, your eye is drawn into what he may be thinking. 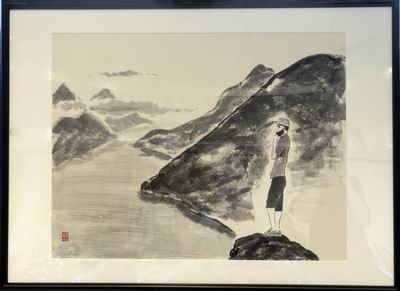 Another Canadiana setting was created by Stephen Albrecht. He told the audience of his visit to Flowerpot Island, which is north of Toronto around Tobermory in the Georgian Bay region. Rock formations that look like flower pots dot the coast line. 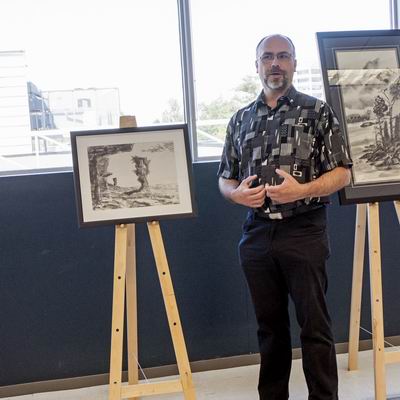 What makes Stephen Albrecht's painting interesting is how he captures the sense of the rough rocks forming the flowerpot and also the rocky structures about it. The use of another flowerpot in the distance, the shadows on the shore near it, and the trees and clouds, create a memorable place. 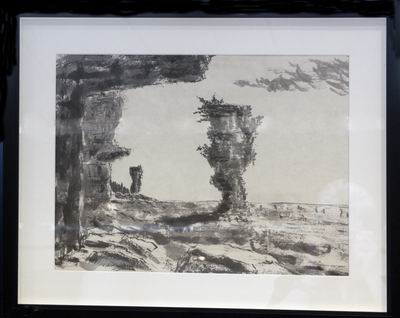 Carol Lee is the other student of Baoxing Zhang who attended the ceremony. Like Dianne Blake, Carol Lee has painted for many years as is evident from her classic yet complex landscape. 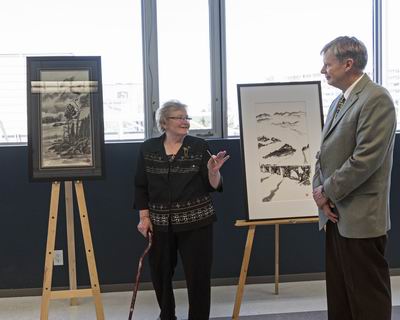 The variety of elements in this painting draw the eye into the scene, which is a blend of a Canadian and oriental landscape. The immediate shoreline with its vivid rocks and trees contrasts with the distant clouds and mountains creating a timeless place that you want to know more about. 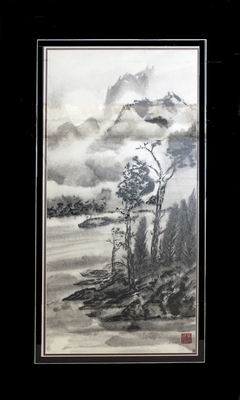 Robert Choi was intrigued by a well-known Toronto bridge. He tried a number of variations before arriving at this painting, which is always the case in developing a painting. Robert Choi was a student of Hiroshi Yamamoto, as were Claudia Chan Garcia and Stephen Albrecht. 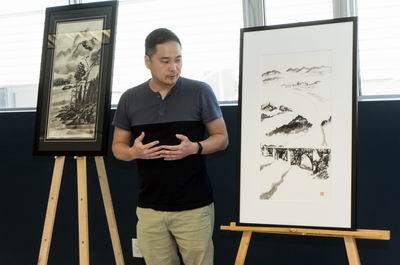 What makes this painting dramatic is the placement of the bridge at the front with the criss-crossing lines of the girders. This strong man-made structure is in contrast to the natural world around it: the trees, mountains, winding stream, and the snow. Buildings near the top of the painting continue this interesting interaction of the natural and man-made world. 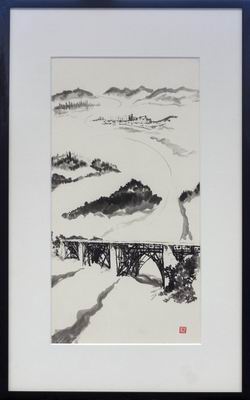 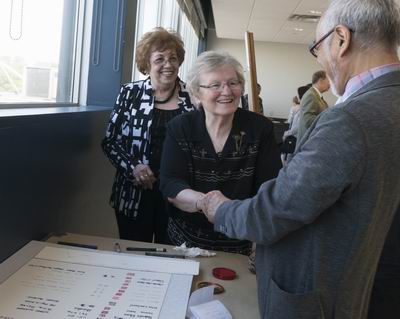 Dianne Blake added her seal. This means adding your name, an impression of the seal, the Japanese or Chinese characters if you can write them, and the phrase in English. 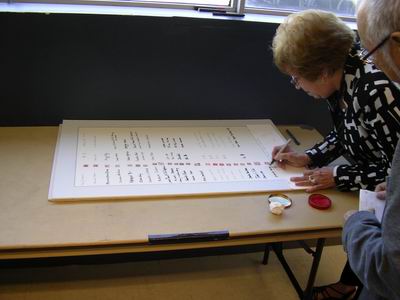 This board with the graduates names is one of many such boards filled over the decades. 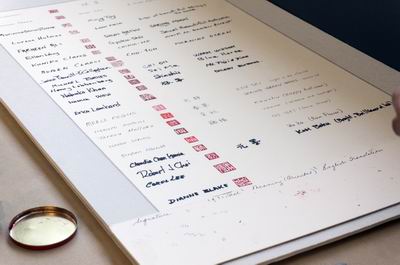 A close-up photo of the graduates seals. 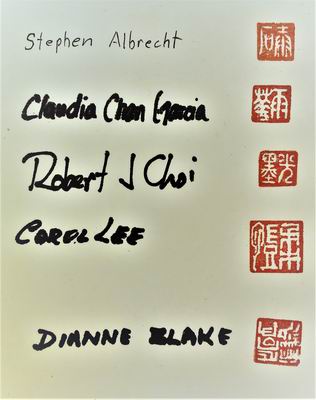 Hiroshi Yamamoto also keeps his own record of the seals of students graduating from the Japanese Canadian Cultural Centre's sumi-e painting classes. 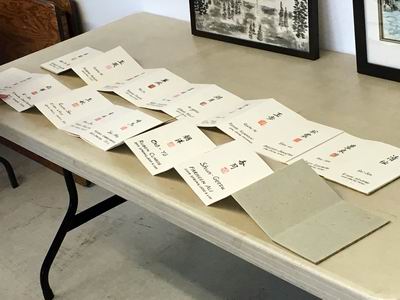 The graduates brought other paintings that were displayed including Dianne Blake's paintings of the other three seasons. 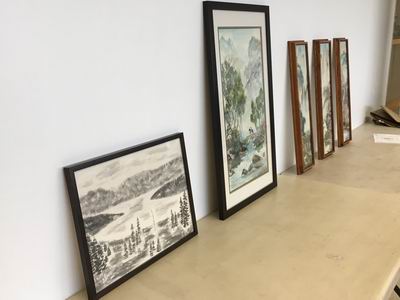 Robert Choi displayed his other versions of his Toronto bridge painting. 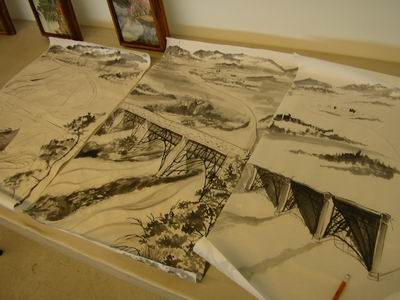 With the graduation ceremony over, family, friends, and members of the Sumi-e Artists of Canada could study the paintings more closely. 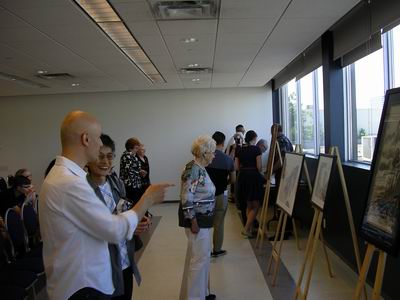 There's always something to eat at the graduation ceremony. Thank you Linda Nakatsu! 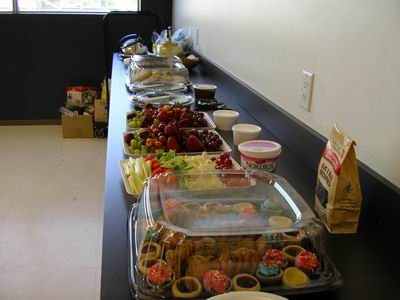 It is a social event too. 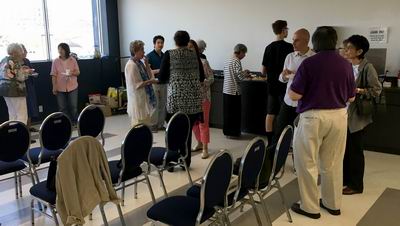 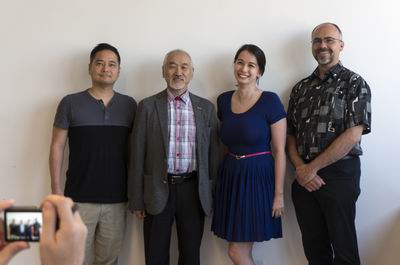 As the ceremony ended, we knew it was time to get back to our painting. Now comes the hard part for the graduates as well as all the regular members, continuing to develop their skills in workshops and challenging themselves to exhibit new paintings each year at the annual show.