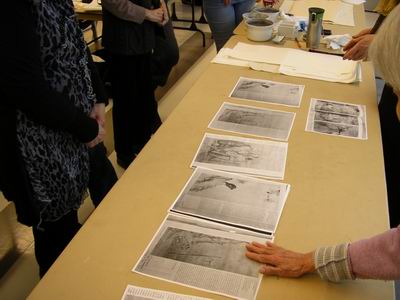 This famous zen painting is called Six Persimmons. It was painted by Mu Chi, a 13th century Chinese monk. Today it resides in Kyoto, Japan. The six persimmons float on an undefined background. The way the six are arranged, the contrasting shades of ink for each persimmon, leaves us contemplating the painting. Elisabeth Rittinger wanted us in a similar way to create objects like the persimmons and find the best way of presenting them on a page. 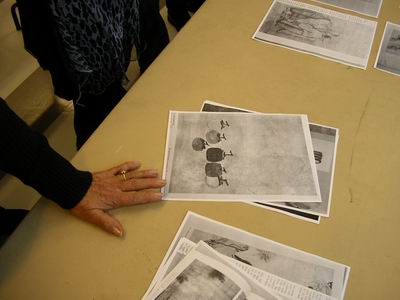 To begin this exercise in designing an effective painting, we were told to paint some bowls. 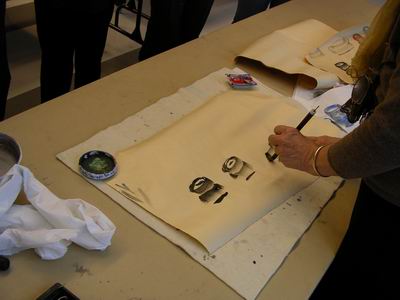 Once we had created the bowls, we were to arrange them for the best effect. Elisabeth Rittinger reminded the workshop artists that vertical and horizontal paper affects the layout. 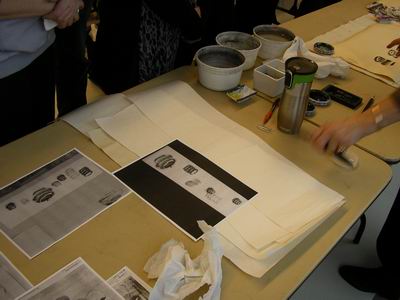 Once the bowls were created, we were to cut them out so we could try different arrangements. 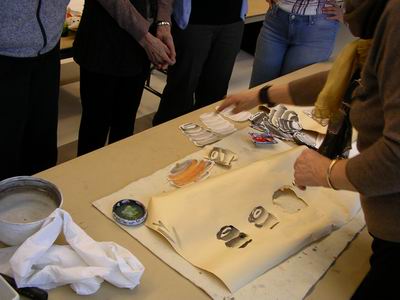 We painted several bowls of different sizes and in different shades, from dark to light. 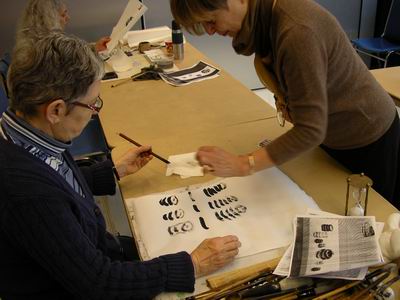 Each person created their own type of bowl-like objects. 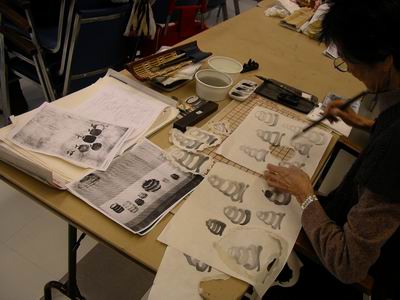 Some bowls had a mix of shades within one bowl, making a collection of distinct objects. 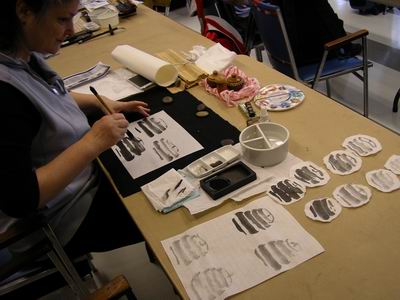 Each artist produced a set of different sized and shaded bowls. 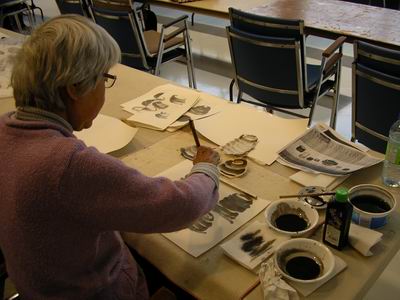 Then Elisabeth Rittinger showed examples of how objects are arranged on paper to produce an effect. 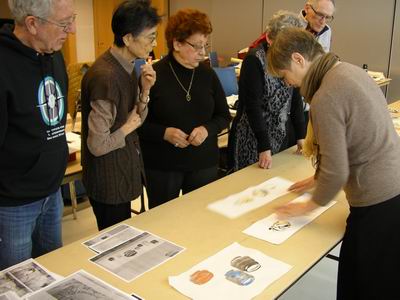 A variety of shades, colours, sizes, and the grouping of objects, leads to an interesting composition. Another way of looking at this exercise is to think of the objects as a host, a guest and a friend; that is, some objects are more dominent in the painting. 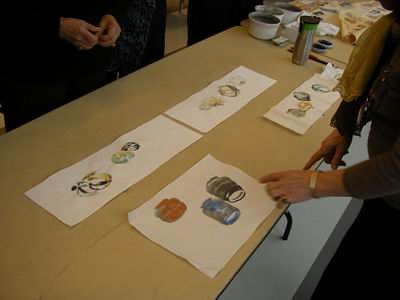 We experimented with moving objects closer in proximity. 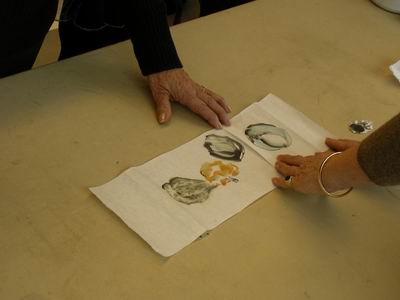 Arrangements on horizontal and vertical paper, Elisabeth Rittinger reminded us, are not the same. 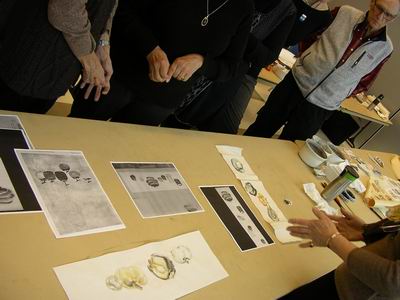 Then we examined our own creations as a group. 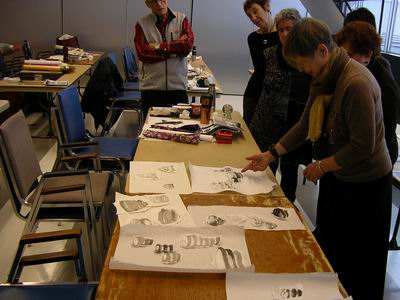 In this arrangement, the darkest object is at the bottom of the page, which is common. 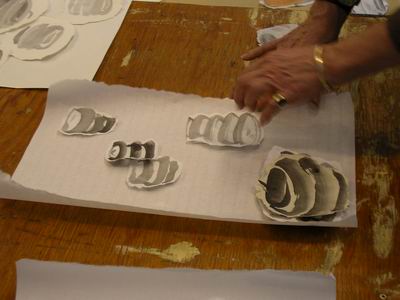 By taking away one object, it created a simpler but more focused work of art. 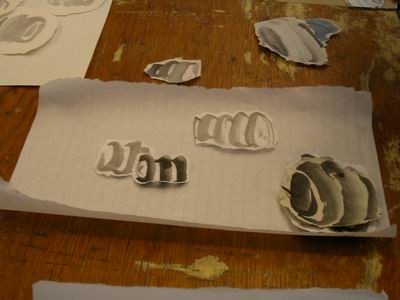 This three piece arrangement was a design we concluded should be left as is. 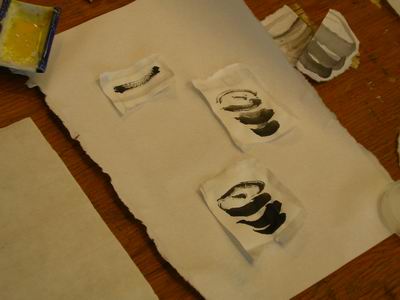 We used the many cut out items we had created to produce various presentations. 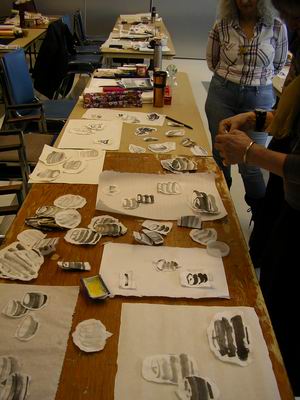 In this arrangement, we also discussed where we might add a seal. 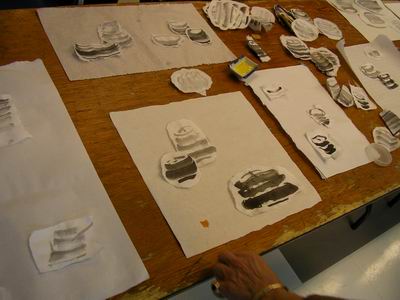 This arrangement of bowls is for a horizontal page, and we thought it was fine as it is. 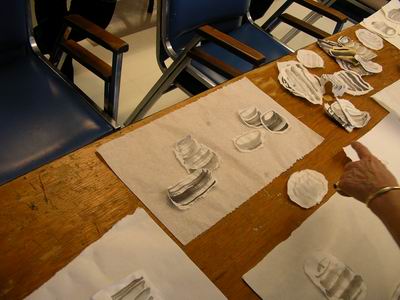 However, we tried several other versions. In this exercise, artists get involved and try out other arrangements. There is not a right or wrong arrangement. Artists try different ways and study the effect to determine what seems best to most viewers. 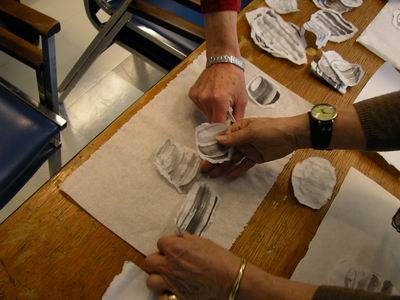 We returned to a similar arrangement, as it still seemed one of the most effective. 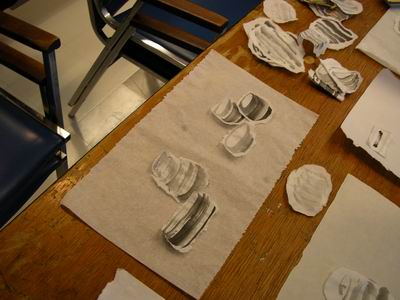 We also liked another arrangement that placed the darkest element on top by itself. Experimenting is important in this exercise. 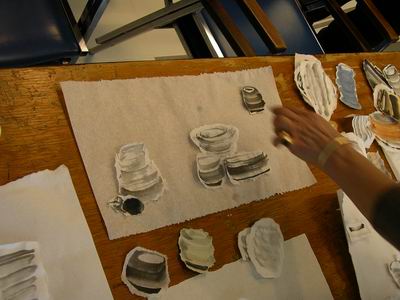 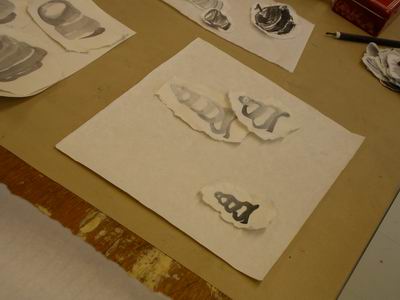 Don't forget when you do find an arrangment you like to tape the objects to the page! 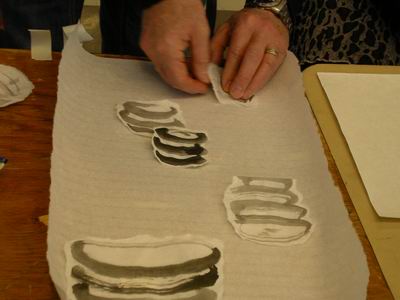