The four gentlemen are the plum blossom, the orchid, the chrysanthemum and the bamboo. These flowers and plants also represent qualities like inner beauty, humility, toleration and endurance. Ouyang Y Dong began his workshop with the plum blossom. 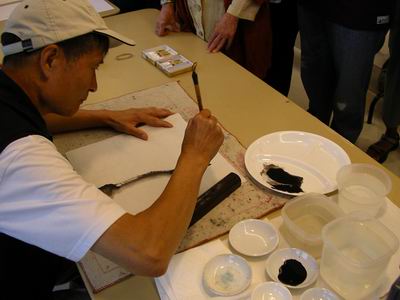 Defining the structure of the branches sets the design of the painting. The branches must be varied in size and tone to create a painting that attracts the eye. Ouyang Y Dong painted his branches decisively in one stroke. 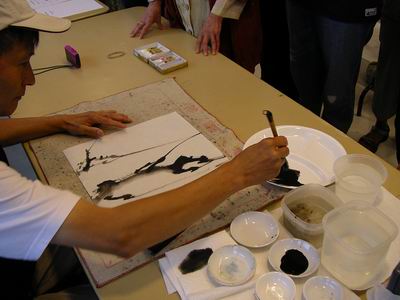 Ouyang Y Dong added the blossoms, which are in clusters. 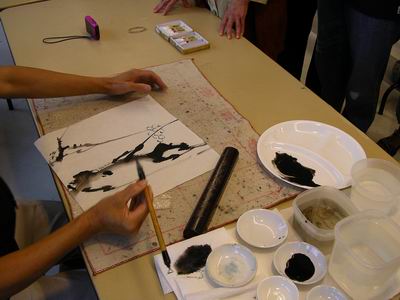 Placement is also important. The blossoms, like the branches, are in various sizes and not evenly distributed. In nature, there is a uniqueness to each plum blossom cluster you see. 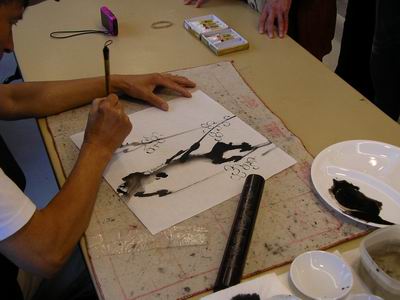 The result was a life-like, original painting with an almost living quality. 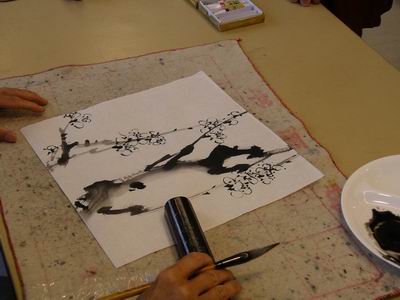 For the orchid, the leaves and blades were drawn in quick strokes by Ouyang Y Dong. He advised the workshop participants to use a large brush. 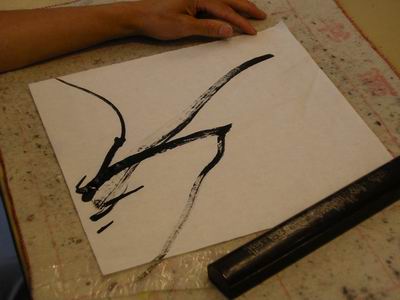 The orchid flower is secondary to the blades, almost hiding behind them and in a softer ink. 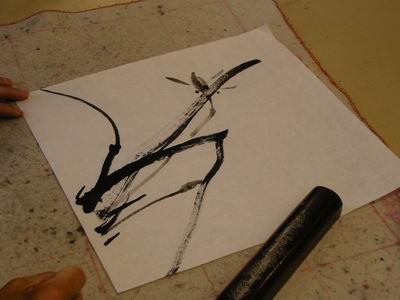 In the orient, there are several types of orchids and chrysanthemums. Ouyang Y Dong painted another orchid variation with multiple buds and flowers. Like the first painting, the leaves and blades are initially created and the buds and flowers that complement them follow. 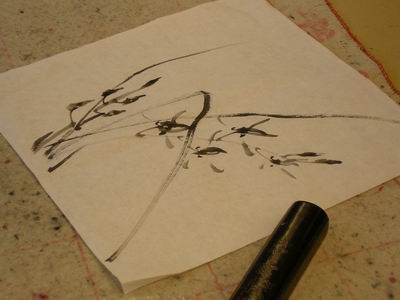 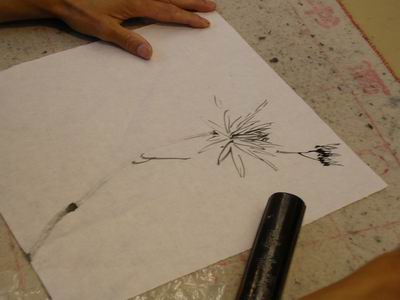 Large, flat leaves can be added with the side of the brush. 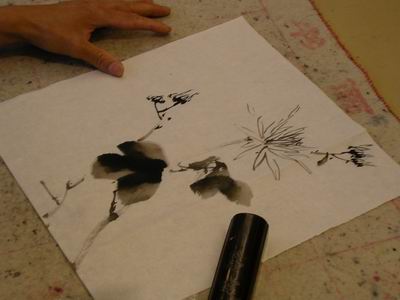 The boneless way of painting a chrysanthemum was also demonstrated by Ouyang Y Dong. With the boneless style, you do not outline the flowers or leaves but paint them in a single stroke. The inner petals are darkest. 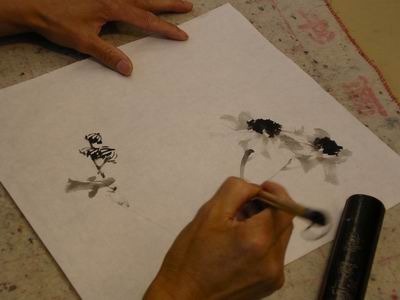 In this engaging composition, Ouyang Y Dong created a dominent flower and then supporting stems, leaves, and other smaller flowers. What makes his chrysanthemum painting so vivid is the design he creates on the paper with his brush. 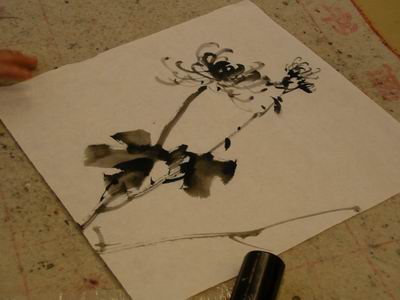 Bamboo is sometimes compared to a family with old branches and young shoots. Ouyang Y Dong's design for his painting is what interests the viewer immediately. An older branch is side by side with a younger one. Both branches were painted with a single brush stroke. 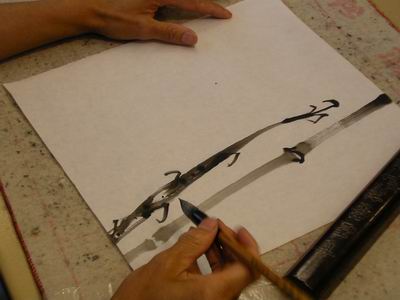 Then he added a young shoot, flexible and bending, to complete the family of youngest to oldest. 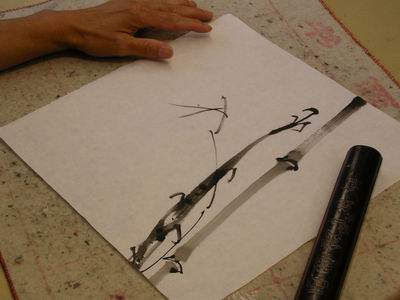 Another bamboo was created with a leaf. Ouyang Y Dong accurately shows the leaves and shoots coming from the bamboo joints. 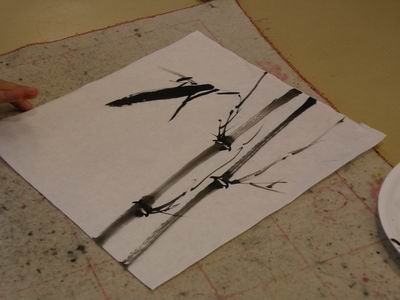 Another captivating bamboo painting showed a different arrangement of bamboo. 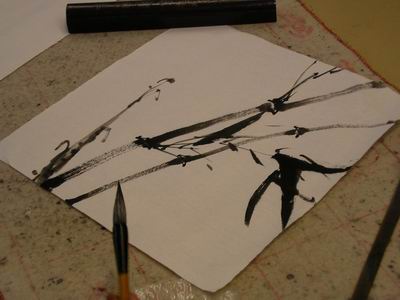 Bamboo leaves in the wind makes a dynamic painting when created like this one from Ouyang Y Dong. 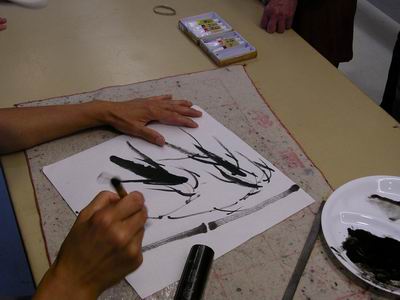 A landscape was the final painting by Ouyang Y Dong, and he began with the mountains in the foreground with black ink. 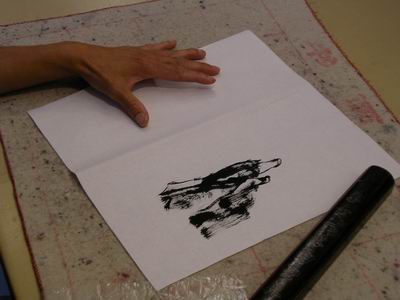 Using a gray ink to indicate distance, mountains were added in the background. 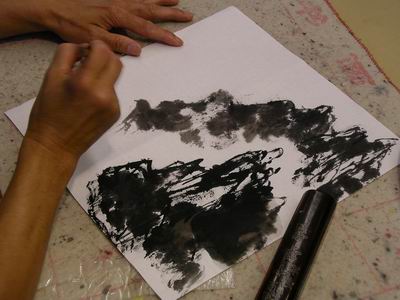 A flowing river to the left of the painting added another element to the composition. 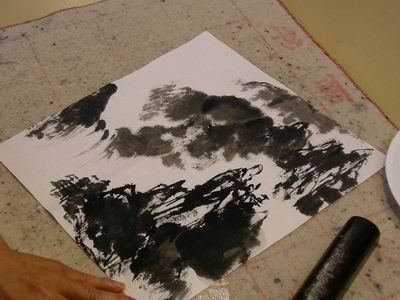 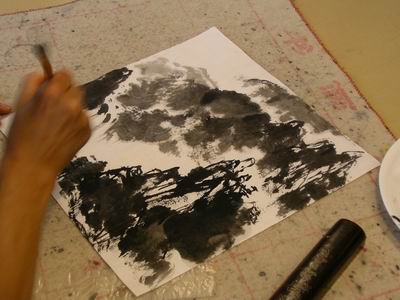 Then it was our turn to work on the many ideas that Ouyang Y Dong gave us. 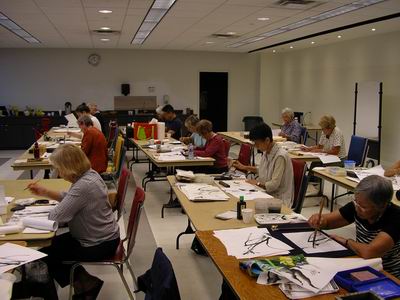 But we were given some coaching sessions. 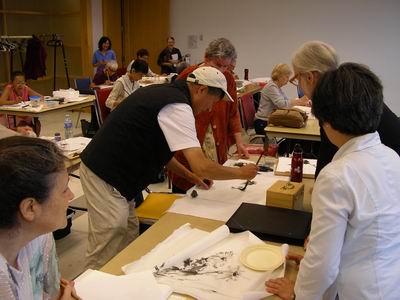 Ouyang Y Dong inspired us to try the variety of subjects in this workshop. 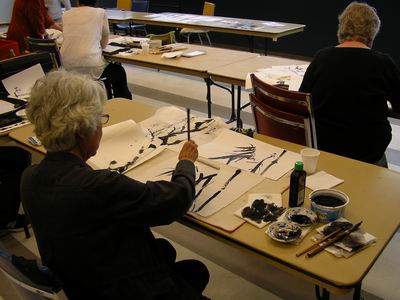 We gathered for a group photo to remember this memorable workshop. 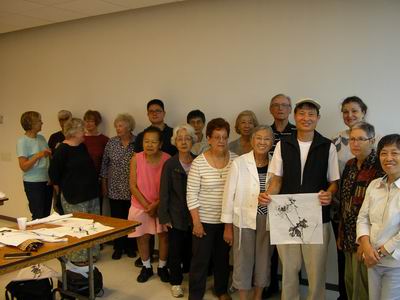 We headed home to continue working on our own paintings using the techniques shown to us by Ouyang Y Dong.