Mimi Yeung's workshop on flowers also included a focus on what makes a good composition. What rules create a work that interests the eye of the viewer? To begin, Mimi Yeung demonstrated the brush strokes to create the petals and leaves of flowers. 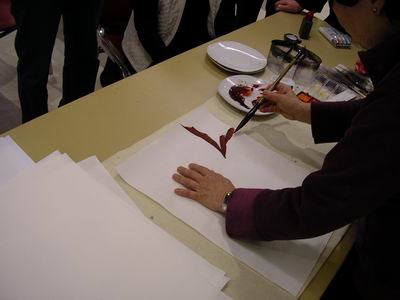 You can create the petal from the stem outwards or vice-versa. However, what is important is to keep the integrity of the flower in your mind. are you facing the flower or is it turned away from you? 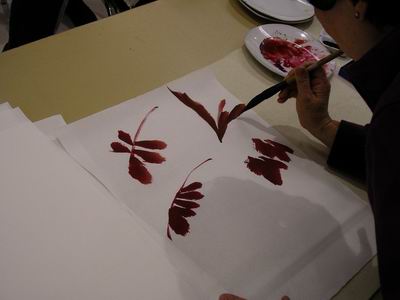 Leaving clear water on most of your brush and only adding colour to the tip lets you create an interesting effect of a petal coming out from underneath another petal. 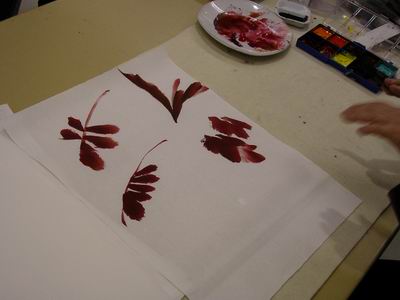 Mimi Yeung showed how to create a variety of flowers and leaves in various colours. 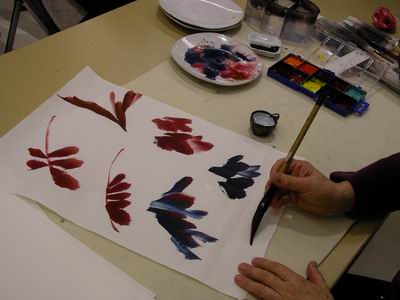 Once the flower has been created, add a vein along the edge. The vein is the strongest part of the leaf or petal. 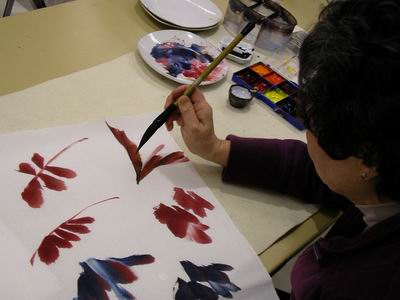 The stem is a natural extension from the flower. 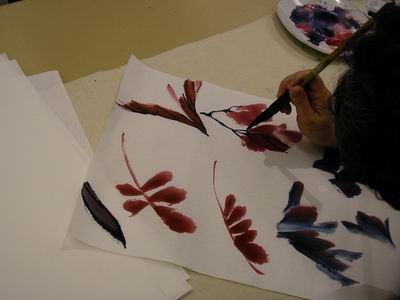 Mimi Yeung continued developing several types of flowers for us. 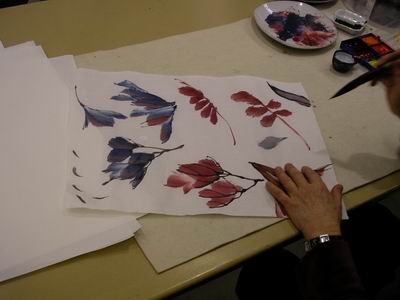 Then it was our turn with some help from Mimi Yeung. 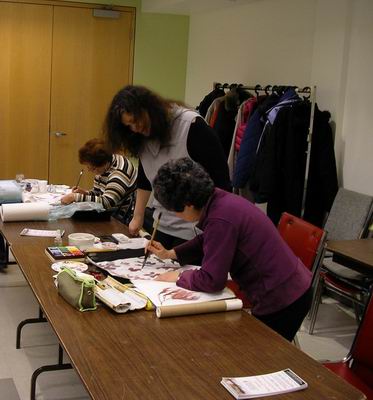 Several paintings from Mimi encouraged us. 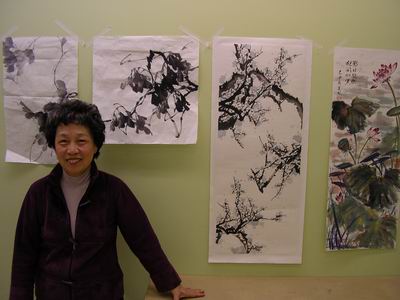 Mimi yeung's paintings are vibrant but quite natural, as if you are looking at into nature itself. 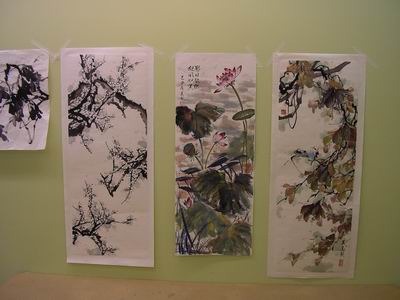 Some of us were able to pick up the techniques, which required practicing the strokes again and again. 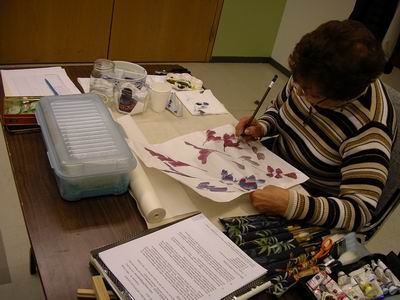 In the next part of the workshop, Mimi Yeung showed how to divide up a painting and create the parts of the painting at key intersections. 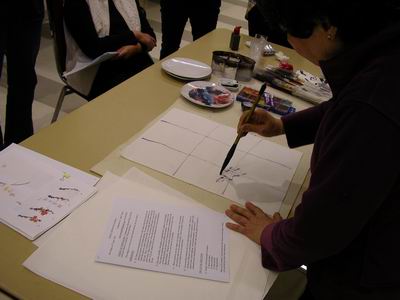 Mimi then developed the flowers and branches along the sections of the painting that attracts the viewer's eye. 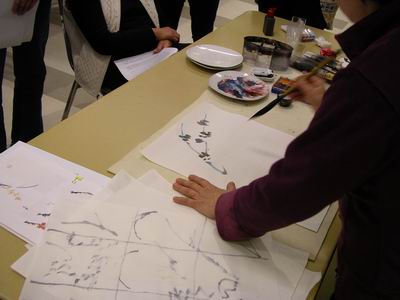 Various shades add to the attraction of a painting. 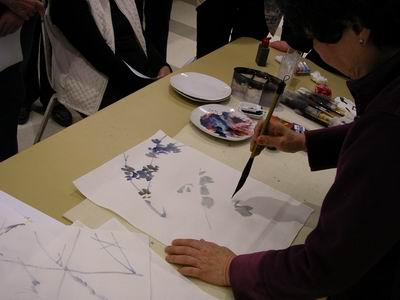 In an interesting look at a branch, Mimi Yeung showed how the older branches were created with a dry brush. 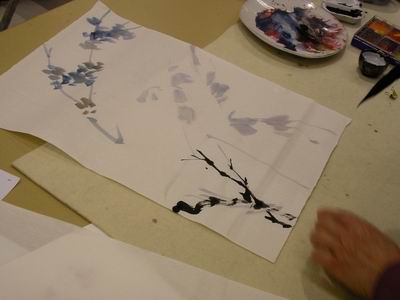 Looking at other paintings can be a good way of seeing the effective use of space in your own painting. 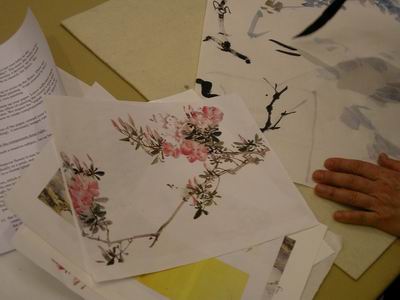 This set of flowers were created with an effective use of space. Note that Mimi Yeung makes each cluster of flowers different. 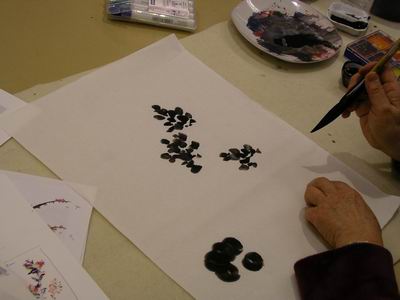 Then came branches. Typically the branches are added after the flowers. 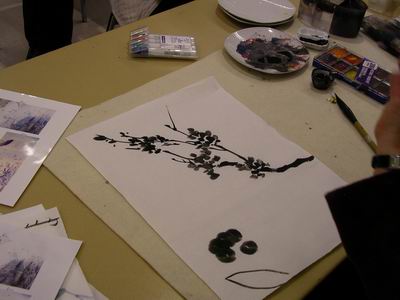 In this painting, Mimi Yeung created the flowers with clusters of circles in a variety of sizes. 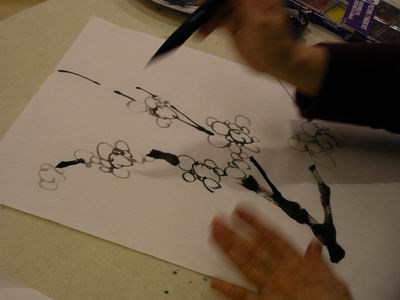 Details such as stamens and the base of a flower, the calyx, made the flowers realistic and vivid. 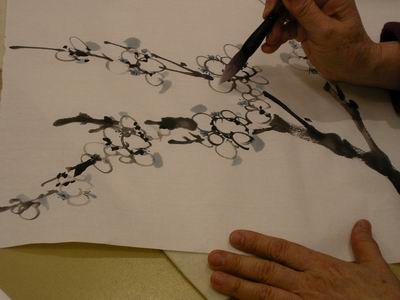 Another look at flowers had Mimi Yeung using shading to get the look of a flower that is opening - which is a difficult effect to create. 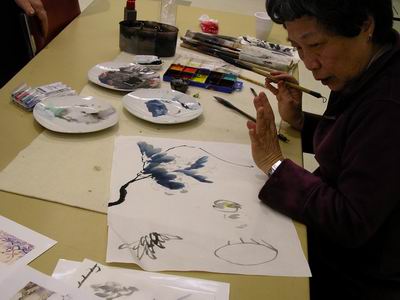 The result was an elegant look of a plant brought to life in a painting. 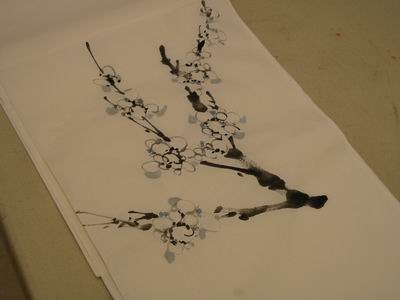 Vines and flowers make an engaging and dynamic painting when done with the right use of space, colour and technique. 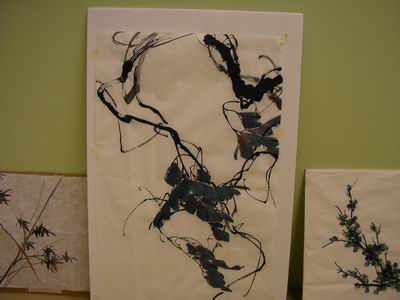 The workshop artists studied a number of Mimi Yeung's paintings as we worked on our own. 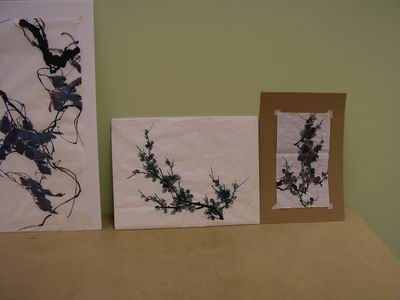 Mimi Yeung inspired us to think more about composition, especially with flowers, vines, and the vivid world around us.