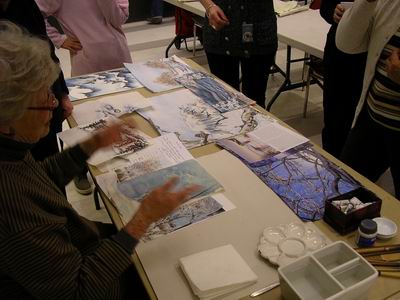 Start with a big brush filled mostly with clear water. Add a little grey ink on the tip. Create a ridge of snow using the heel of the brush. A ridge of snow should be a smooth line. 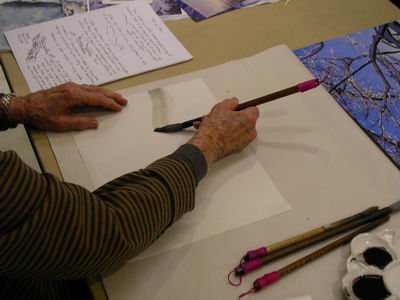 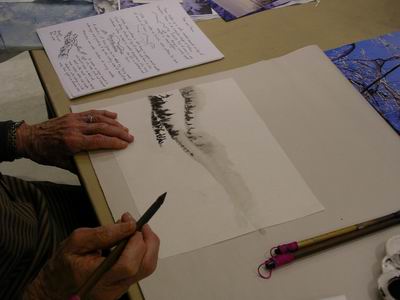 Moira Mudie used black ink to create nearby evergreen trees. When you create the tree branches make them not too symetrical. 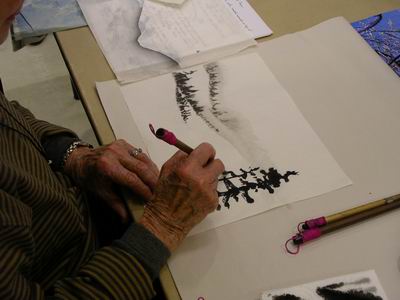 A river bank edge followed again with a smooth line. Moira Mudie encouraged the workshop attendees to imagine the river as a flat surface. 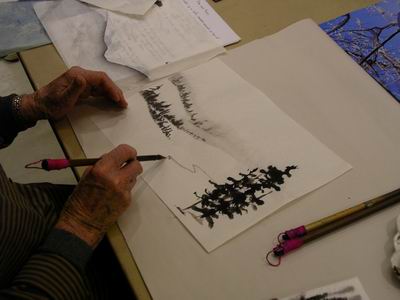 Leave some snow-covered rocks in the stream too. 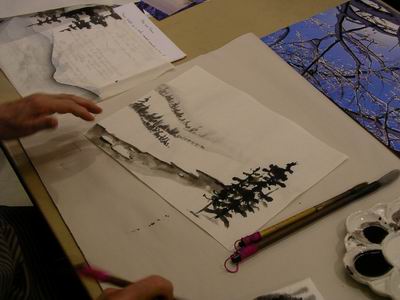 The composition was a balance of all the natual elements you might find on a winter's day. 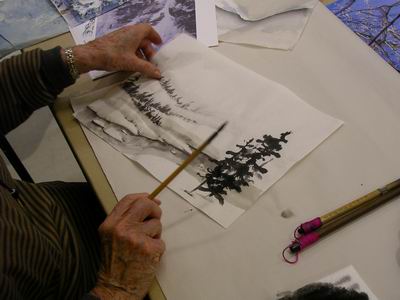 How do you paint snow on the branches of pine? Moira Mudie demonstrated that you start by using clear water to paint the blobs of snow. Needles are added afterwards to indicate the underlying branch. 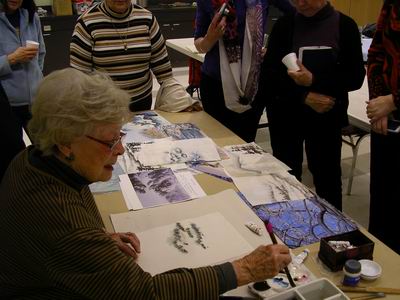 Indigo paint can add a contrasting blue sky to your painting. Green mixed with light grey adds life to your pine needles. 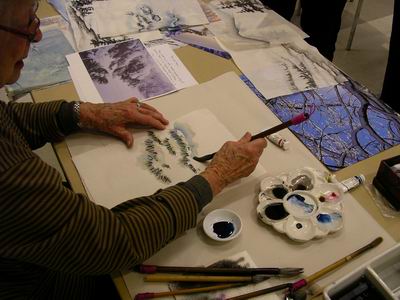 The tree trunk of this pine filled out the composition of the painting. Use small circles to create the knotty, gnarled effect of an old tree trunk. 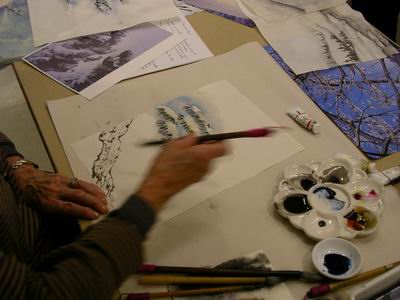 Burnt sienna is an effective colour for this tree trunk. 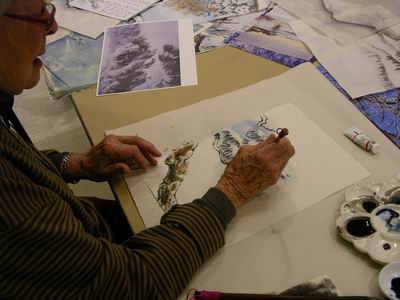 Then it was our turn to create banks of snow, trees and rivers. 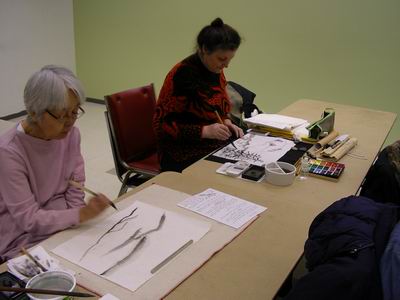 There seem to be never enough books and calendars on pandas. 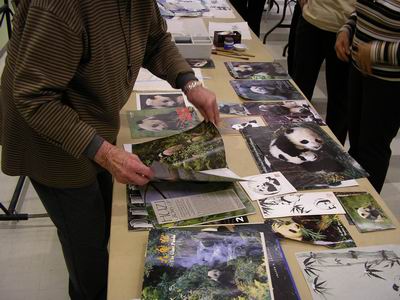 Here's a way of getting started with the panda, Moira Mudie suggested. Draw a hexagram. 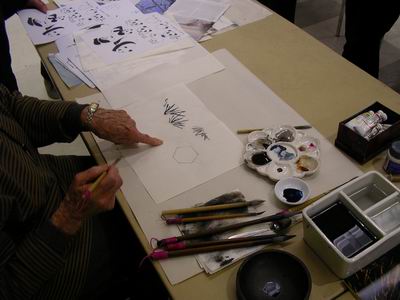 Then add ears, kidney-like patches for eyes, and a flat nose. 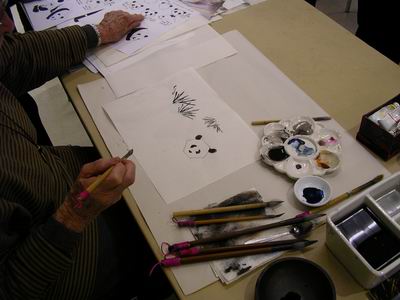 Pandas lend themselves to humerous portrayals. 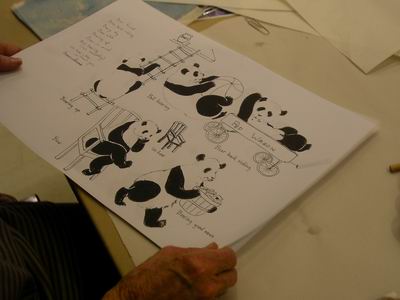 This panda started in a similar way. The focus would be on the head. The proportions of the ears, eyes, nose is what makes the head so immediatley recognizable. 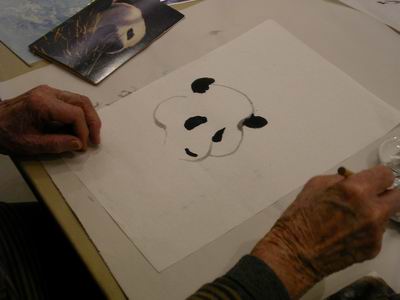 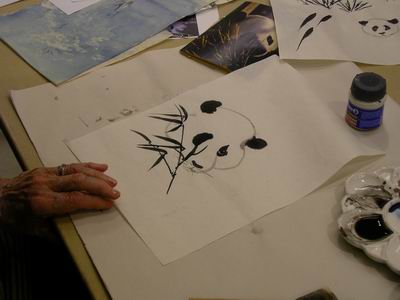 A paw added to the composition. Although the panda is usually considered a bear, it can hold items as it has a thumb like a raccoon. 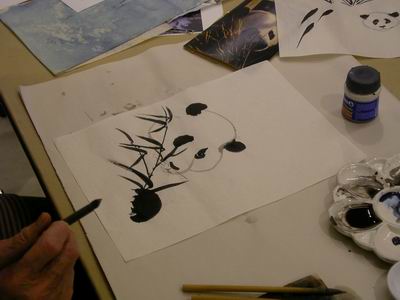 To fill out the background, more bamboo shoots and sky were added. 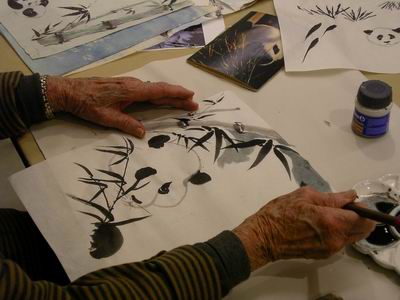 Be careful not to come too close to the leaves when adding the background. 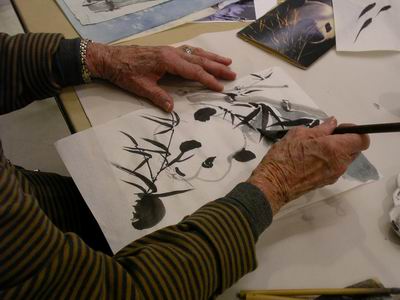 Vary the background using light and darker grey ink with a hint of indigo. 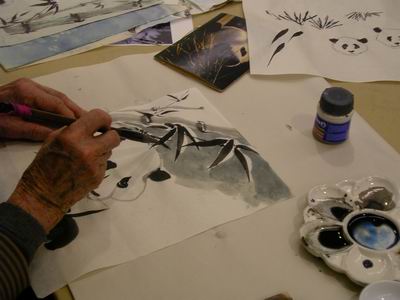 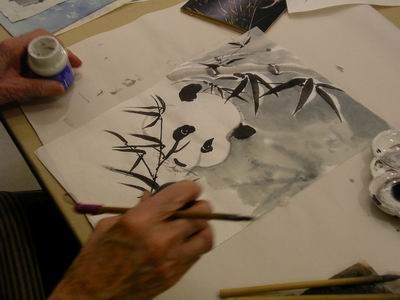 Workshop artists created their own pandas. 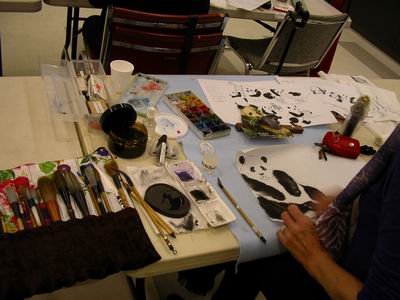 A panda and a bamboo shoot seems to be a universal theme. 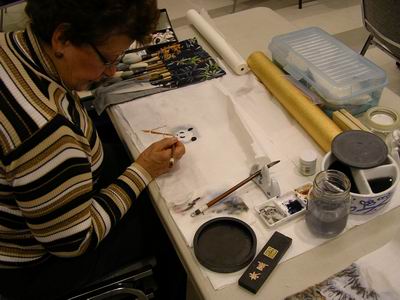 You can learn more about Moira Mudie in the links section.