Many sumi-e painting lovers look forward to the Sumi-e Artists of Canada exhibition. This year they found another intriguing art collection from sumi-e artists. 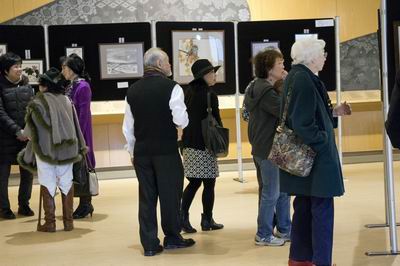 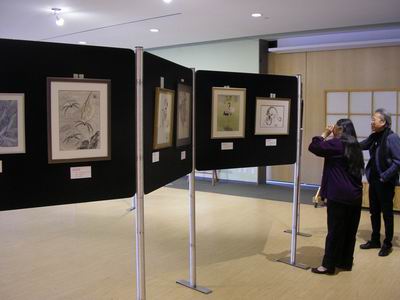 However, whatever the style of the artist, the attendees at this year's exhibition found something of interest. 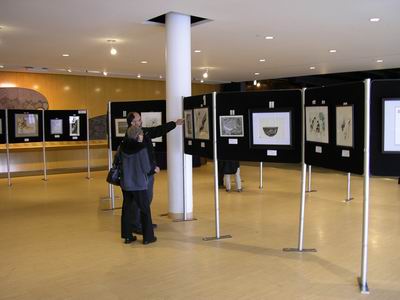 A beautiful, strong moon, shining over a hushed, still night and forest! 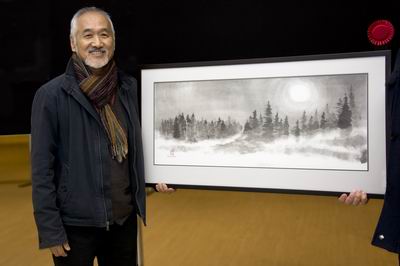 Shelter by Laura Beaton received an honourable mention. Mary Ikeda had these comments about this painting.

Lovely use of restrained colour! 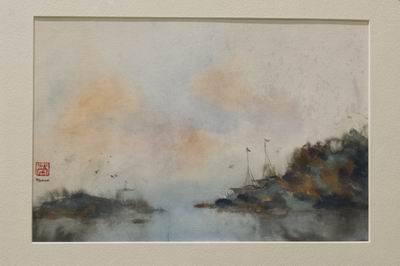 Gary Bist's Cat and Mouse received an honourable mention. These comments were added.

Lovely lines, fluid and sure, starting with a strong tail, and ending with a little mouse. 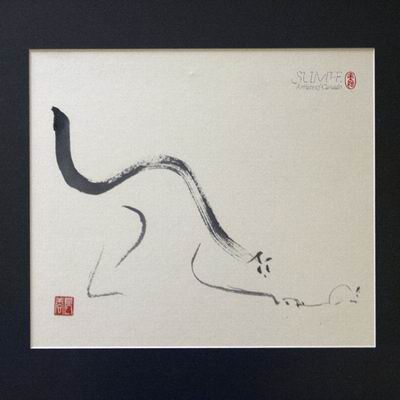 What's Next by Diana Bullock received an honourable mention. Mary Ikeda made this comment. 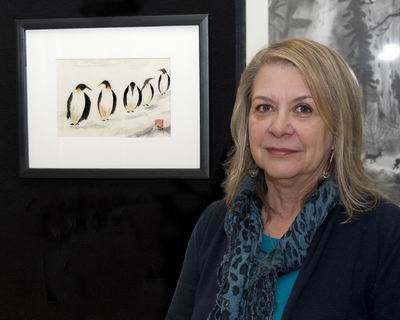 These horses by Roslyn Levin were found in her painting called Through Deep Water. This honourable mention had these comments.

Good motion of the horses against the water. 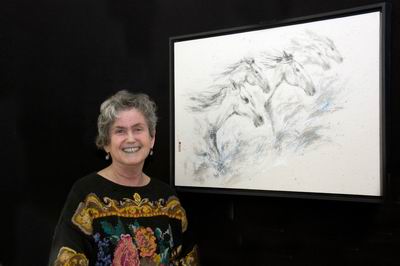 Black is so Colourful by Mimi Yeung received an honourable mention. These comments were made.

Good composition, good use of sumi-e. 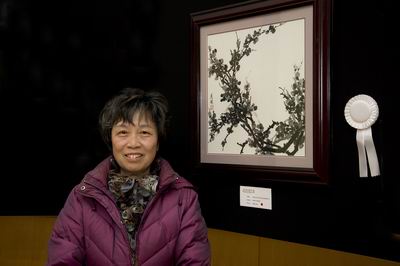 Judging sumi-e art is difficult, especially when there are many excellent works in a variety of personal styles. Mary Ikeda, this year's judge, studies a painting with Marie Ikeda. 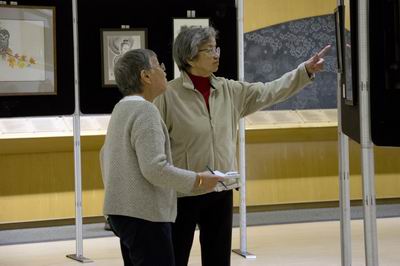 This swallow swoops past a few leaves in a striking compostion. 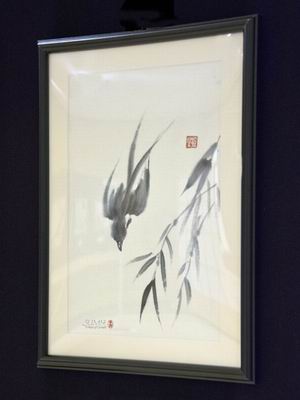 Landscapes are suited to sumi-e paintings, where often nature, not man, is dominant. 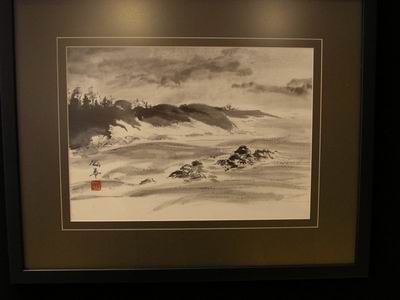 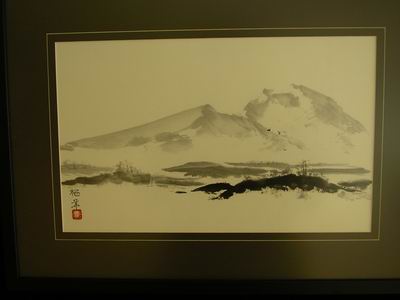 Classic sumi-e subjects like this painting of flowers and leaves were found at this year's exhibition. 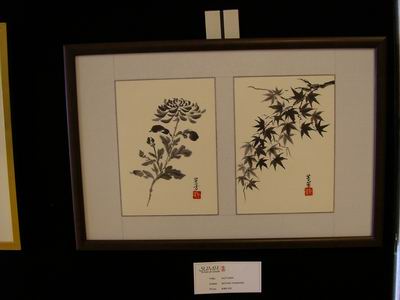 Japanese calligraphy also was displayed such as this work for harmony and respect. 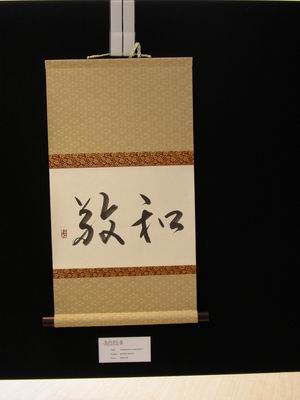 There were some interesting figures found in the paintings. 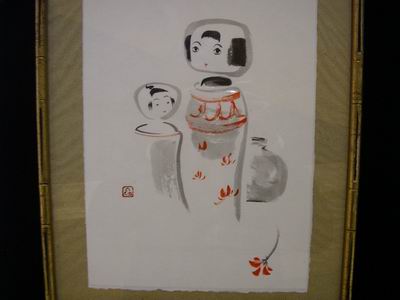 This man and his dog you might find in a park. 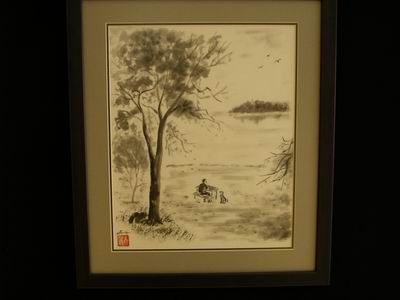 This woman holds a maple leaf to contemplate. 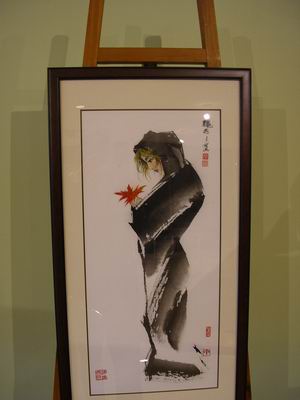 Hidden in some of the paintings were gems like these entertaining bugs. 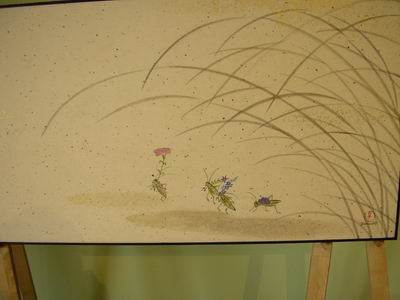 It helps sometimes to have some explanations. 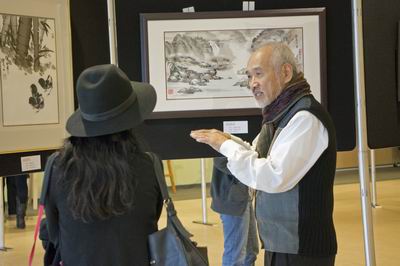 Other times, friends gathered with their own explanations of the art work. 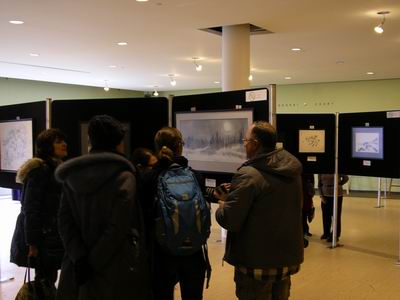 Cards were available for sale and proved popular with the hundreds of people who saw this year's exhibition. 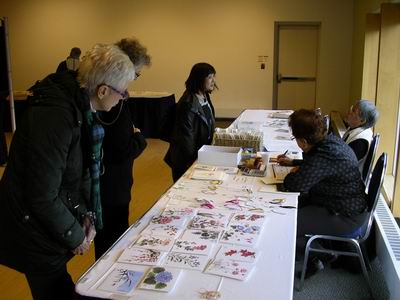 The tea room was another popular attraction for sushi and green tea. 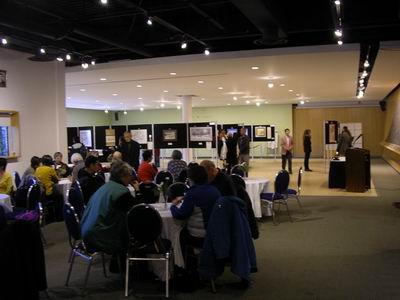 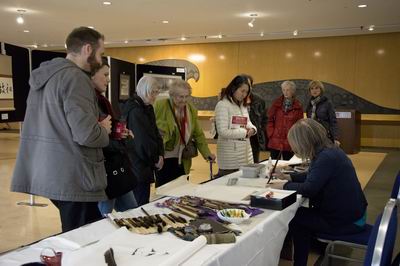 You can always learn. Gary Bist, President of the Sumi-e Artists of Canada, watches Diana Bullock paint with a feather. 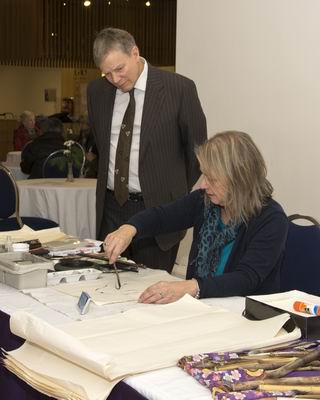 Members, their friends, and many others spent hours studying the paintings. 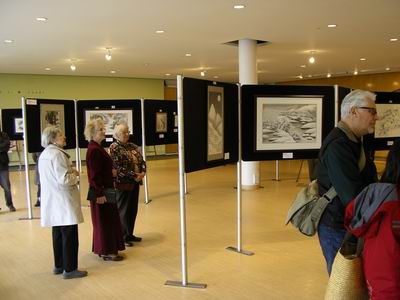 There were lots of outstanding and vivid works. 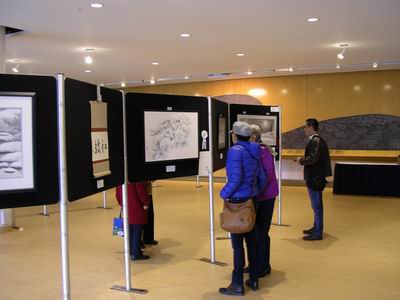 Sometimes you had to look twice. 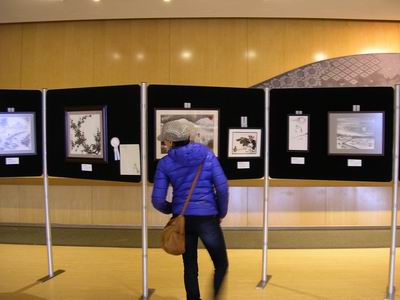 Other times, visitors had to think about a painting. 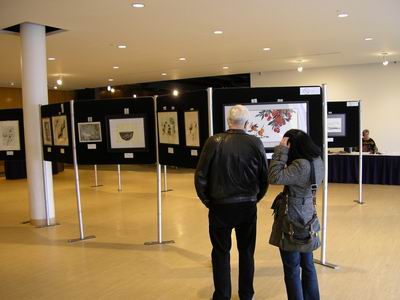 Most made a note to return to future sumi-e painting exhibitions. 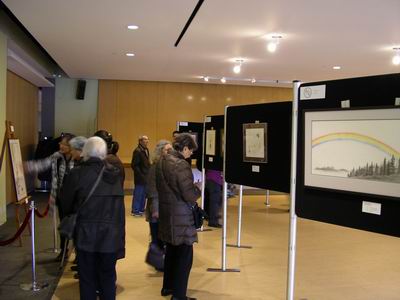