Images for Halloween give an artist a chance to explore variations on animals and scenes. Roslyn Levin showed us that you can have fun and learn valuable painting techniques when playing with the scary elements of Halloween. Roslyn began by outlining a favourite animal for this event, the cat. 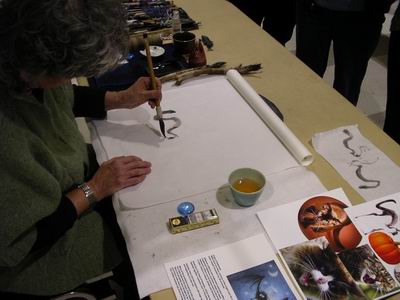 Roslyn Levin's cat, interestingly, began with the tail and then worked towards the head. 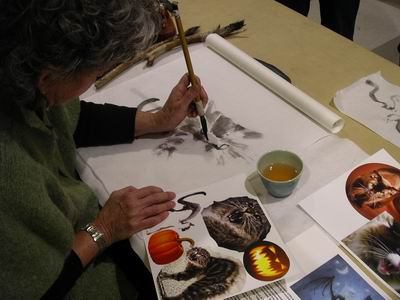 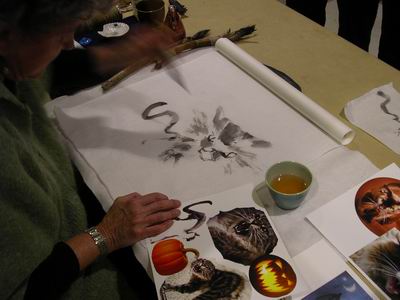 Then, darker ink highlighted features that Roslyn wanted to stand out. 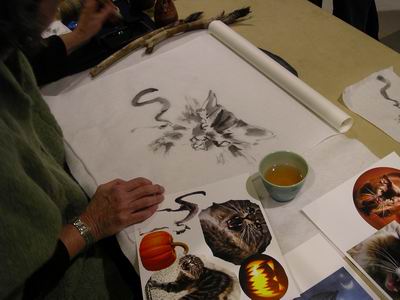 Fangs, eyes, and a paw with nails turned the cat into a Halloween type cat! 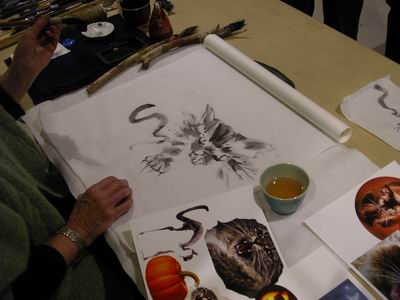 This cat though was more in the humorous vein. Roslyn Levin often captures the essence of an animal with bold strokes. 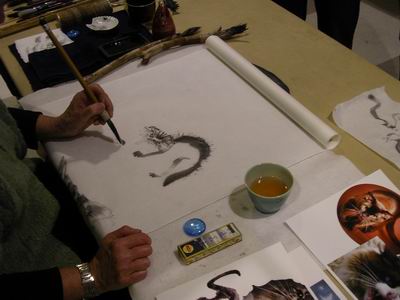 These two eyes made for a curious start to a sumi-e painting. 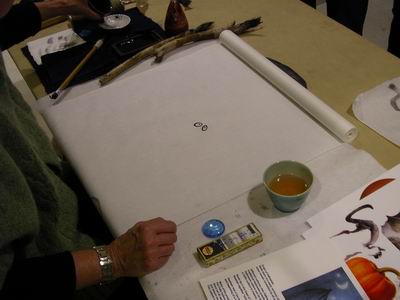 They led to a bat and then an accompanying pumpkin. In her workshop, Roslyn Levin created some paintings that brought these images together and formed a Halloween composition: cats, pumpkins, bats and a moon in the background can create a memorable Halloween scene. 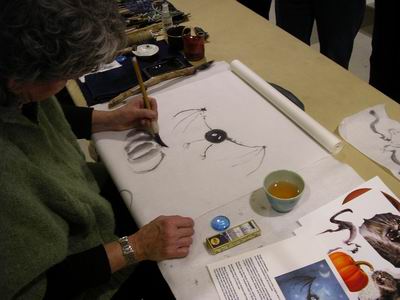 This pumpkin created in strong brush strokes catches your attention with its eyes and teeth! 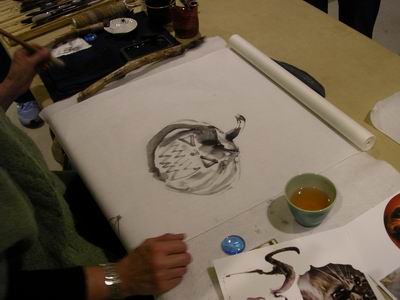 Roslyn returned to her cats, creating a flowing image starting with a cat's tail. 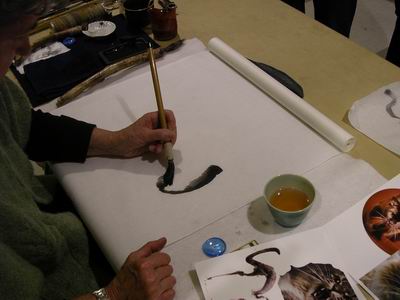 That led to two cats facing each other provocatively. A scene cat lovers know only too well. 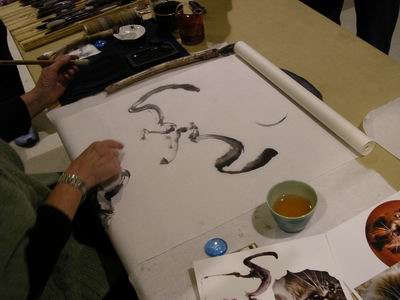 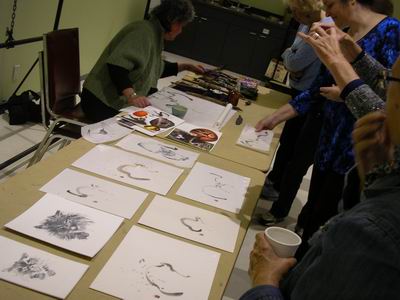 This cat is ready to jump out at you. Each of Roslyn's cats has a personality of its own. 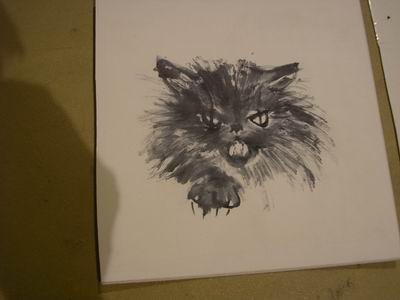 In this painting, two continuous lines captures the essence of each cat. 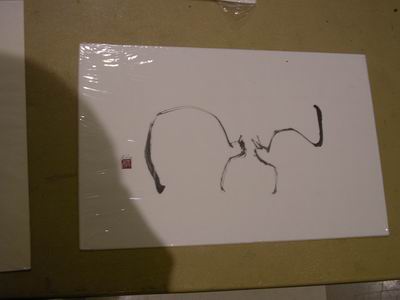 Then it was our turn to try our hand at Halloween inspired ideas. However, Roslyn Levin came around to help. 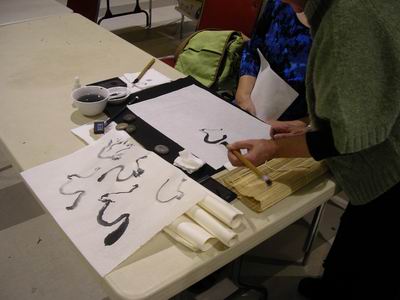 This cat was made to be a little more fearsome with a few more brush strokes. 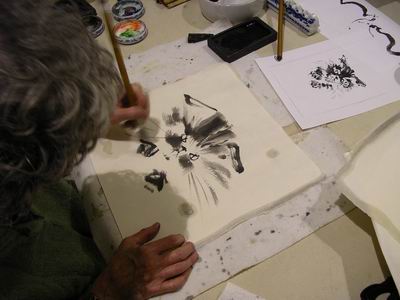 Workshop artists came up with their own inspired feline fantasies. 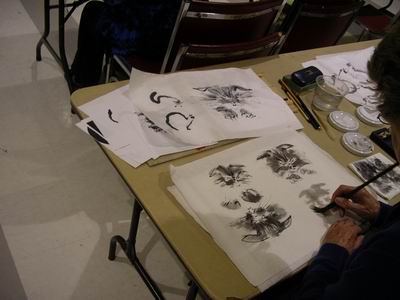 Roslyn returned with another look at a cat. 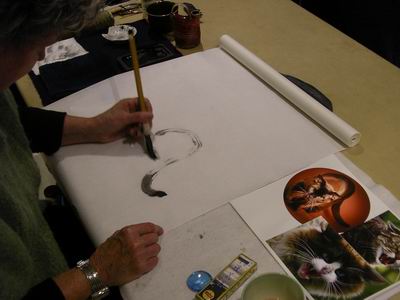 One brush stroke created the outline of a cat facing you. 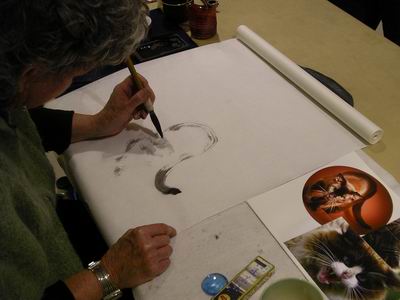 Focusing on the head, Roslyn turned this cat into one on the prowl! 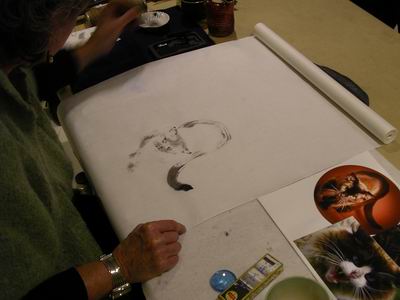 If you have seen a stalking cat, this painting will be well known to you. 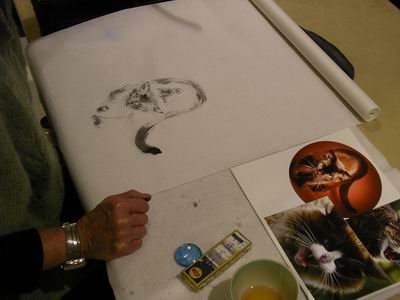 With bats, pumpkins, cats and a few other scary though humerous Halloween ideas, the workshop artists posted some of their ideas on the workshop wall. 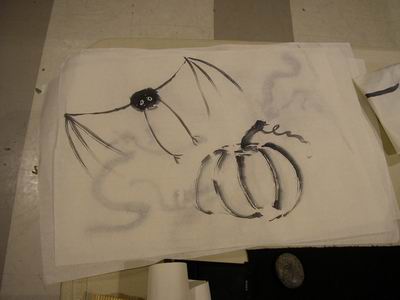 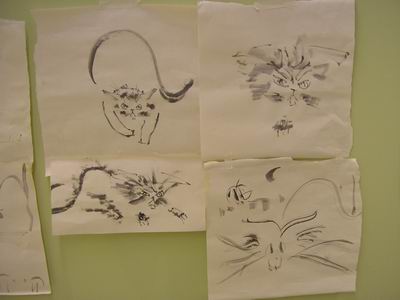 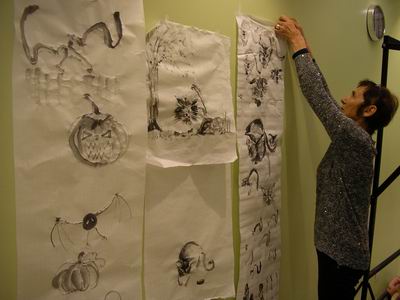 Roslyn Levin's workshop showed that Halloween can be entertaining and fun, as well as scary. 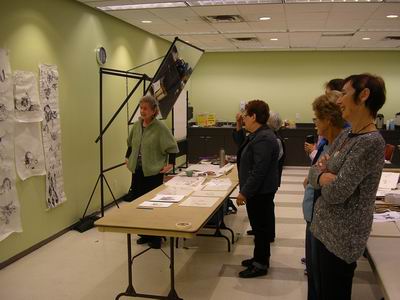