Haiku is a concise form of poetry, usually a few short lines, that often uses stark or spare images like sumi-e painting. Ann Goldring showed that relationship by including some sumi-e paintings by Roslyn Levin along with readings from class. 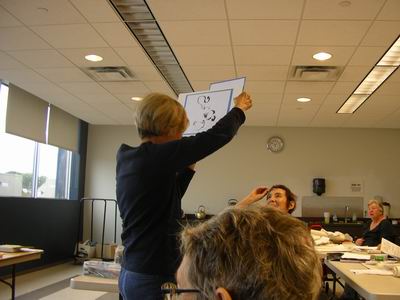 Examples of haiku and sumi-e together were provided for the workshop by Ann Goldring. 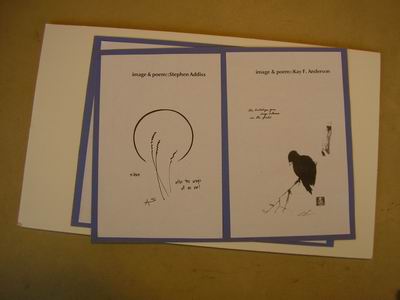 Haiku Canada receives many haiku poems each year showing that this ancient art form continues to fascinate us today. 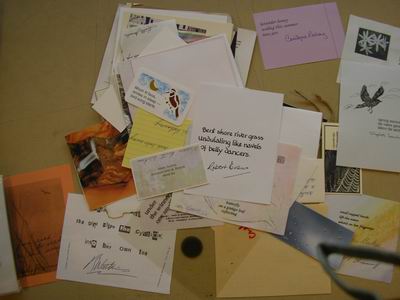 Frogs are the subject of many haiku poems. Basho, a famous haiku poet, wrote:
an ancient pond
a frog jumps in
the splash of water 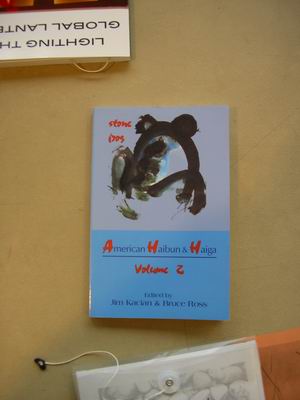 Then it was our turn. Writing a few short lines is more challenging than you might imagine! 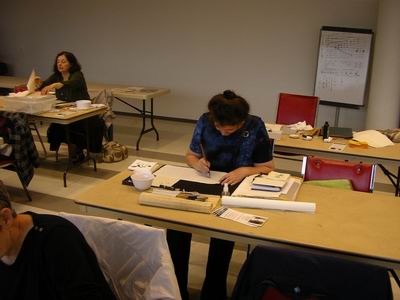 Sometimes painting an idea quickly and then connecting the image with words works. Or, vice-versa. 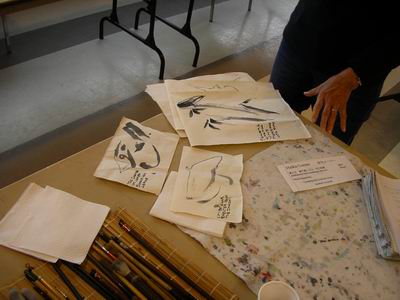 In a show-and-tell session, the workshop participants taped their efforts to a wall. 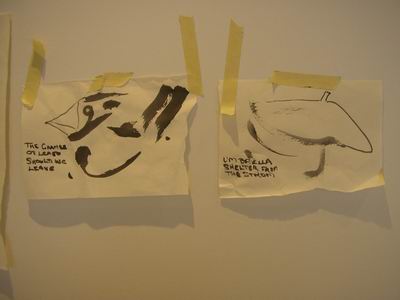 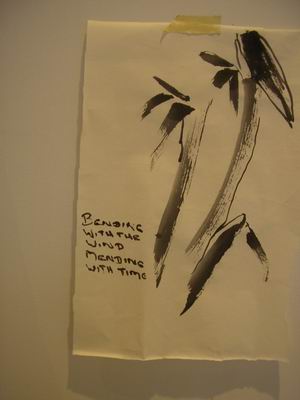 This leaf on a pine branch led to this haiku:
pine and needles
winter santuary
for a golden leaf 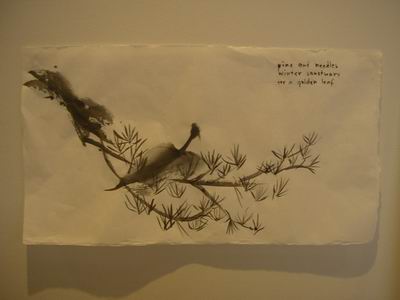 This painting came from one of Ann Goldring's haiku poems:
caterpiller
turning a leaf
into itself 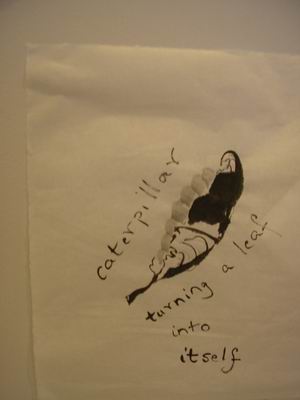 A spider inspired this image with this haiku:
a tiny spider
weaving a quilt with thread of light
silver on my balcony 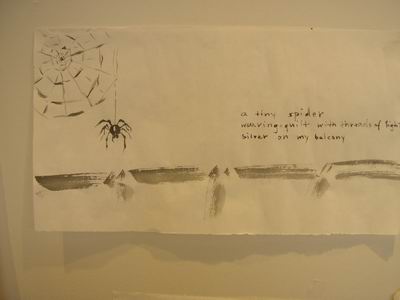 Some haiku poems led to sumi-e paintings without words. 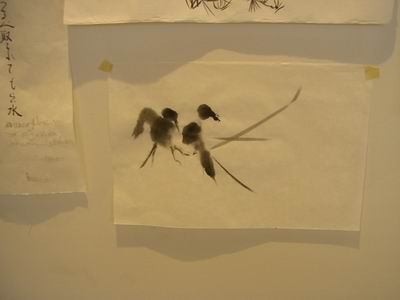 Some haiku were written with Japanese calligraphy. 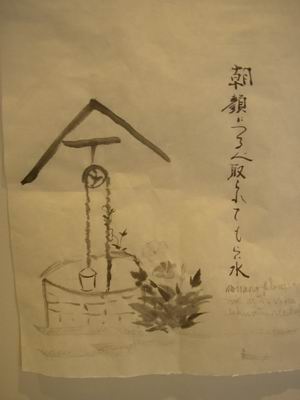 This image of a snail on a rock had this haiku:
little snail
slowly slowly
goes up
Mount Fuji 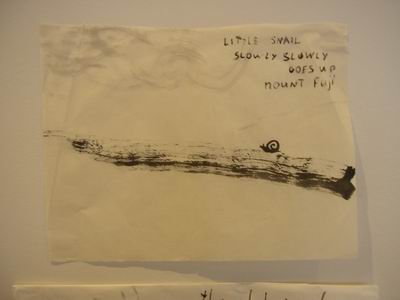 The cherry blossom (the sakura, in Japanese) is symbolic of the transitory nature of life. Each year there is a cherry blossom festival in Japan when the cherry trees bloom. This haiku reads:
all kinds of things
I recollect -
cherry blossoms 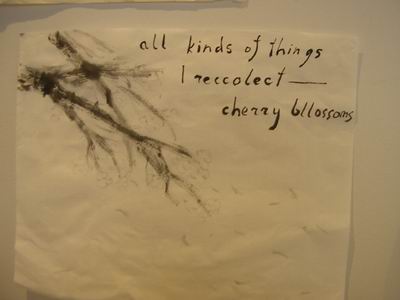 A handout from Ann Goldring had this haiku by Sora, who accompanied Basho on his journeys:
up the barley rows
stitching stitching them together
a butterfly goes 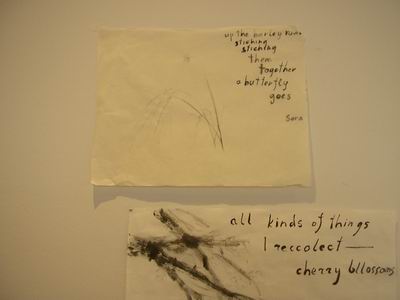 Our haiku wall generated an energetic reaction from the members at the workshop. 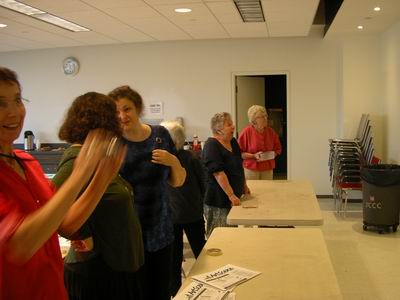 Participants read their works and shared what ideas had sparked their haikus. 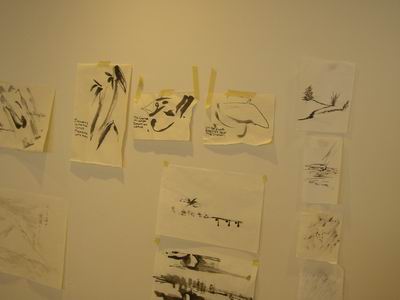 The workshop was an expressive experience! 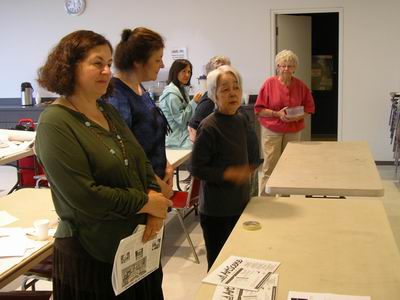 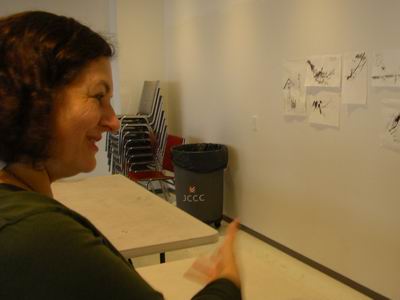 Interested in trying haiku out? A personal haiku book can develop your skill. 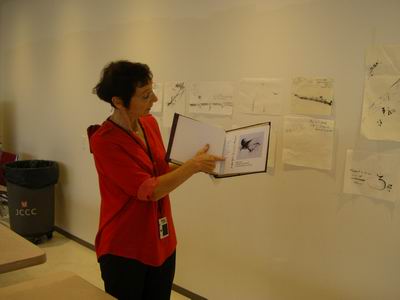 Ann Goldring thanked all who had explored this fascinating poetry and shared their experience in words and painting. 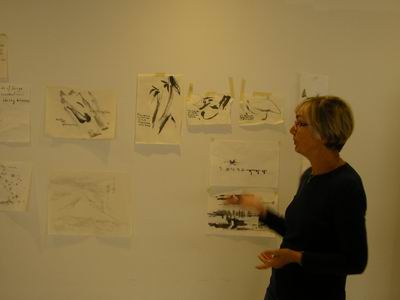 Ann Goldring has written a book of haiku, only the wind, which is listed in the books section.