Etegami is a post card with a simple painting and some words. These cards can be made for a holiday season or for a special occasion. A painting on a card can also become an inspiration for a future large painting. Baoxing Zhang began his workshop by showing the types of cards to use, which are available at art stores. The paper is not as absorbent as rice paper but the techniques of sumi-e painting can still be used. 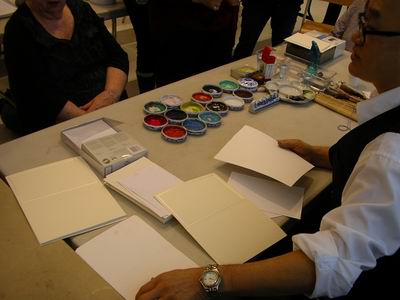 Use a small brush for etegami. Stick to simple outlines to create an etegami card in a few minutes. This mouse, hidden behind a vegetable, was painted with a pointed brush by Baoxing Zhang. 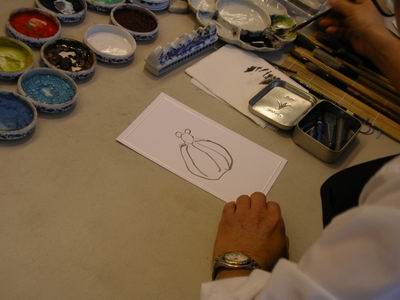 The traditional sumi-e style painting can also be used. One way to create a rice paper like surface is to first paint the surface with a brush and clear water. 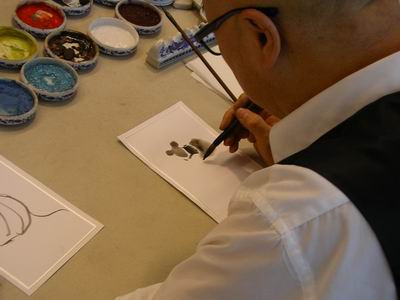 This mouse looked similar to what you would expect using a brush loaded with sumi-e ink. Once finished, you can sign your card. 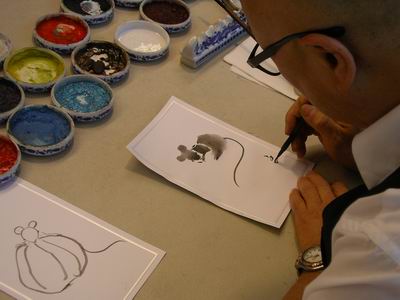 A seal can be added to cards just like a painting. A seal for a card is small. The regular seal used in a painting is too large. 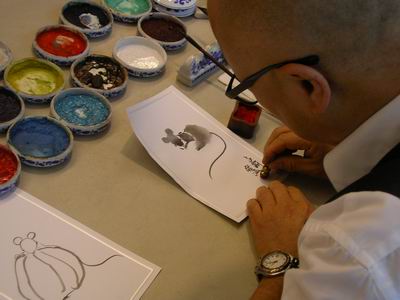 For a crane, Baoxing Zhang, spent most of his time on the head, which is the key feature. The body was created with a watery brush with grey ink. Then the tail feathers and legs were added. 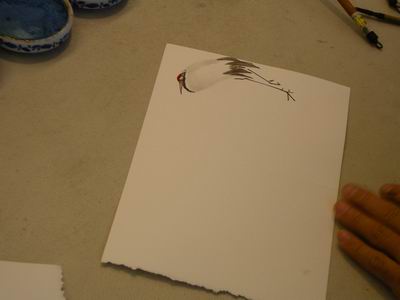 The background adds to the composition. A branch with some pine needles was all that Baoxing Zhang added. 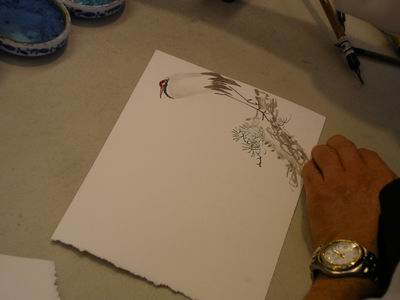 A moon can be used effectively on a card. 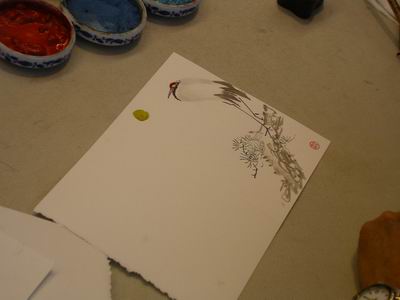 In this painting of an ox, a sun completed the painting. 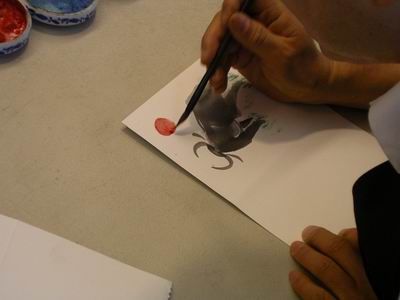 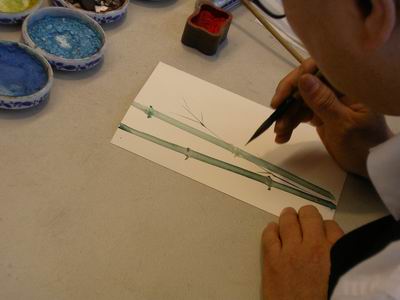 A few smaller, thin branches were added. The leaves were dark. 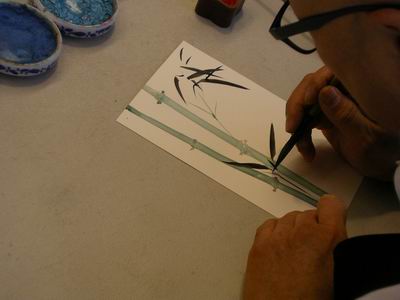 The result was similar to a regular painting of bamboo but smaller in scale. 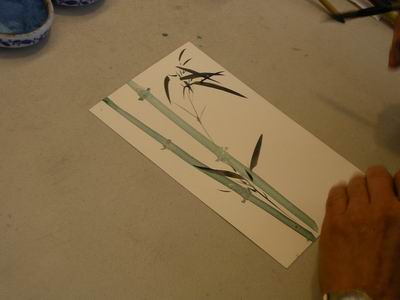 Flowers can start with the leaves. 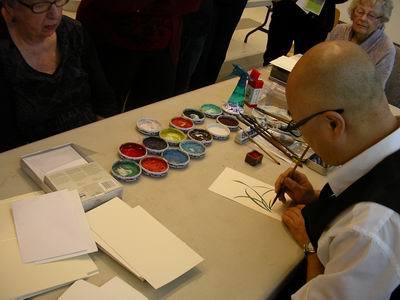 Then the flower can be added in a contrasting colour. 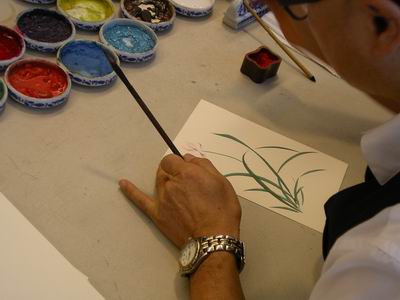 Simplicity again is the key to making an effective card. 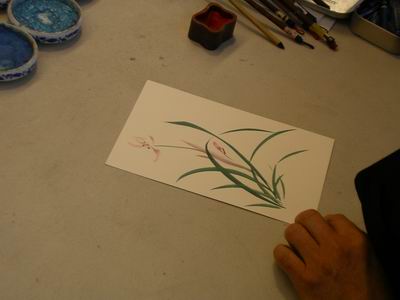 There is no rule in creating a card. Another flower, such as a chrysanthemum, can be started with the petals. 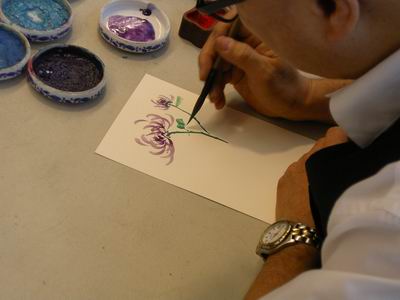 Then the background can be painted to complete the painting. 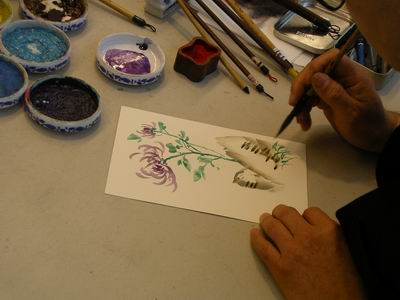 An old branch was created with a dry brush. 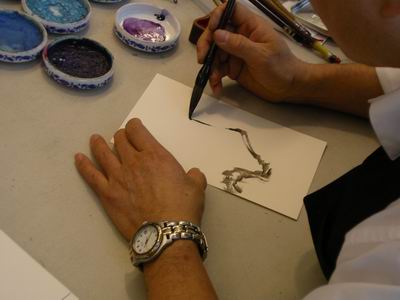 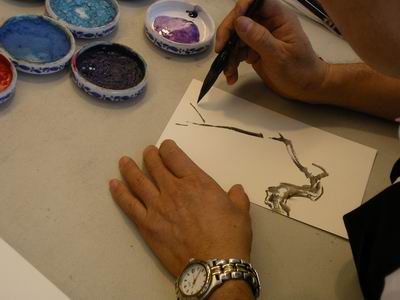 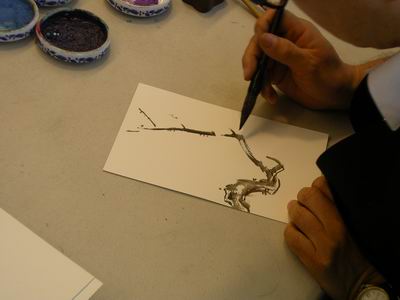 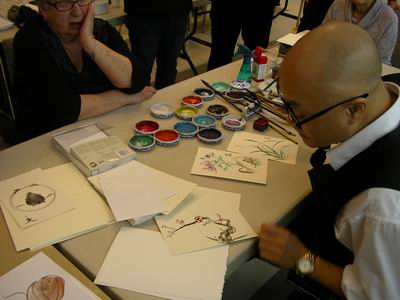 Some of the cards created earlier by Baoxing Zhang had dried, so he signed them with calligraphy. 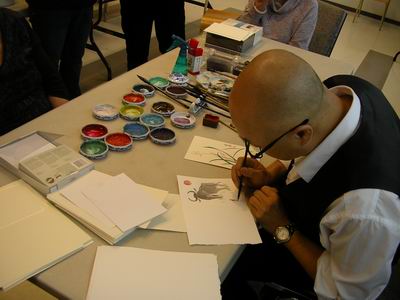 Baoxing Zhang had brought some examples to give workshop artists ideas as we started working on our own cards. 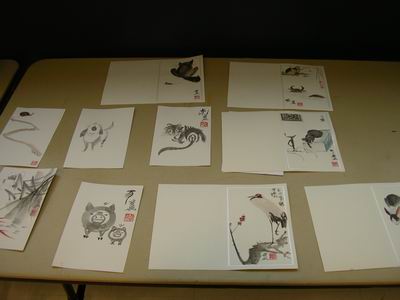 Some cards were funny and others captured a glimpse of life. 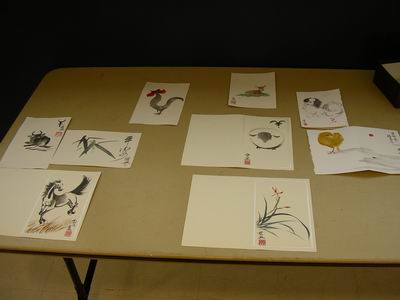 Baoxing Zhang also helped us as we worked on our own cards. 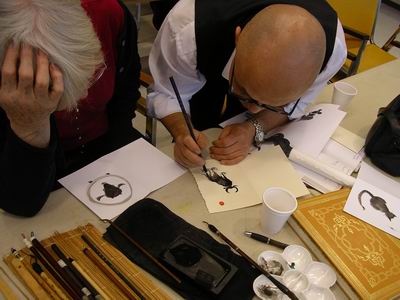 We created many cards at Baoxing Zhang's workshop, which is a goal. These cards could be used for gifts, sold, or gave the artist an idea for a future painting.