Cranes and pines form a classic subject for those studying sumi-e painting. Important brush strokes must be used to create each image, and putting them together requires an eye for composition. Richard Tang began his workshop by suggesting that the Internet is an excellent source for finding pictures of cranes. 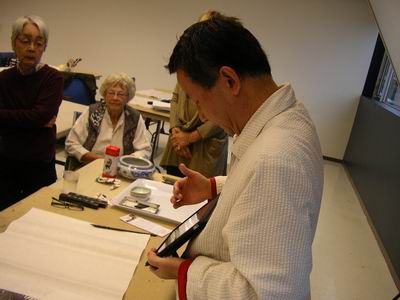 When you create a painting with the crane, you should make the crane the dominant image. The pine tree can then be used to enhance the painting. 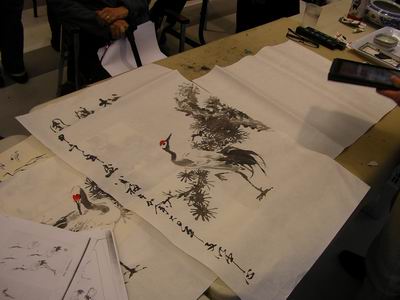 Start with the head. The beak, the eyes and the shape of the head form the direction and establish the proportion of the crane. 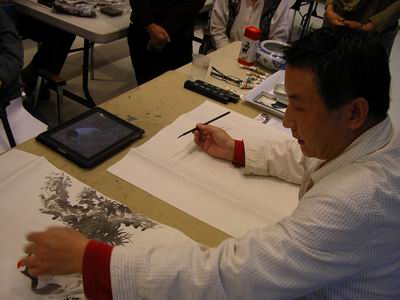 Richard used a fine brush to outline the head. 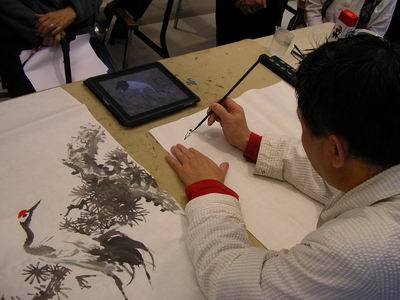 The neck can be made in a single stroke using the side of the brush. 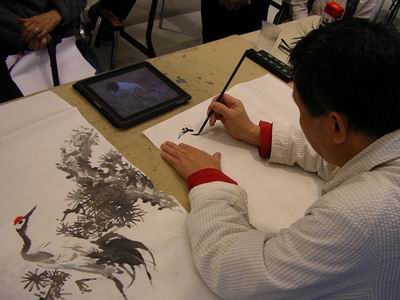 Richard Tang also demonstrated the crane with its head facing you. 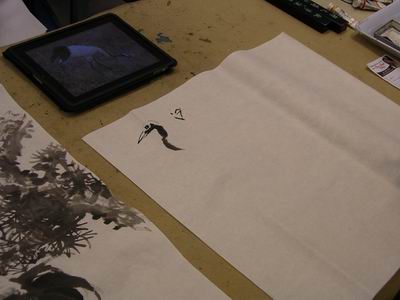 The red cap is added after the head using a single stroke. 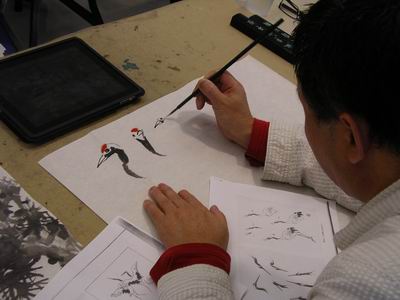 You can prepare yourself for painting a crane by creating many sketches in different postures. 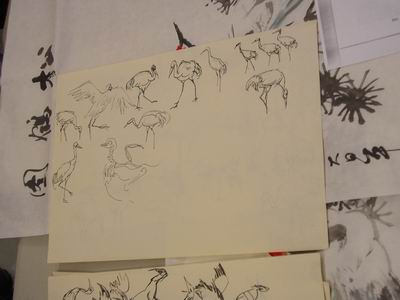 The sketches give you a variety of approaches to your painting. You might have a crane searching the ground for food or flying or landing from flight. 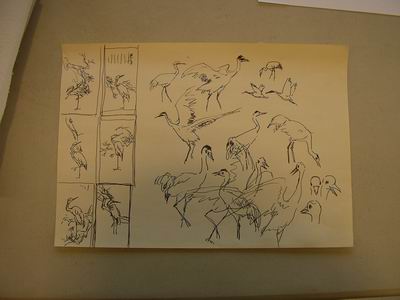 Richard Tang cautioned the workshop participants about getting too precise with a painting. Instead, Richard suggested that white space be used and the brush should focus on the feathers of the wing to provide the crane's body. 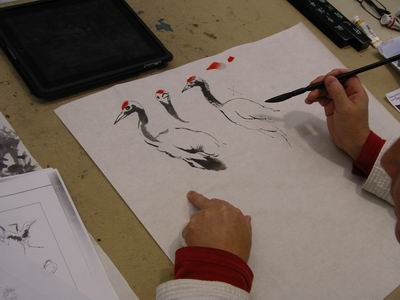 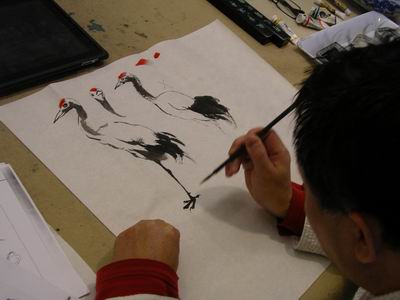 The feet or talons and claws must be in proportion to the size of the crane, which itself is large. 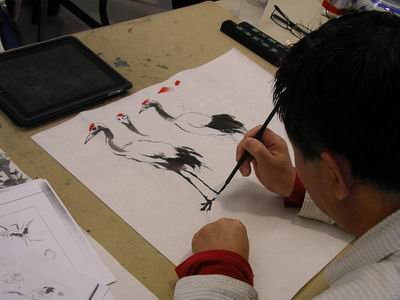 Richard Tang added the main branch to the left of the cranes. A branch of a pine tree is done with a large brush. The brush is a little dry to create the look of a branch that has survived many seasons. 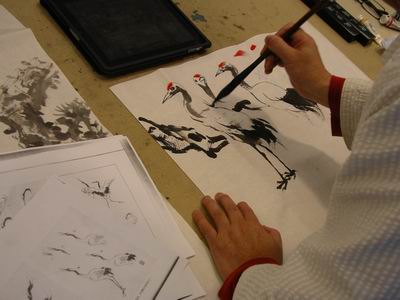 The branch provides a way of tying the painting together. Note that space is left to add pine needles. 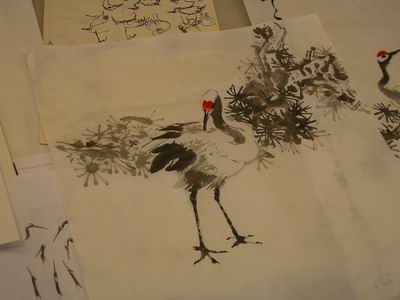 Richard wove his branch behind the cranes. He also added more feathers to give the cranes more definition. 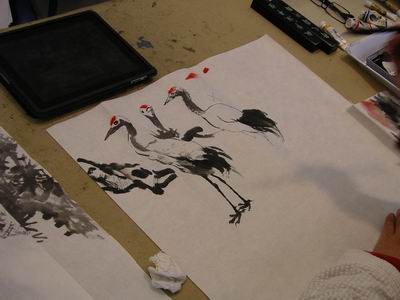 Adding feathers in various shades of grey creates the three-dimensional image of the crane. 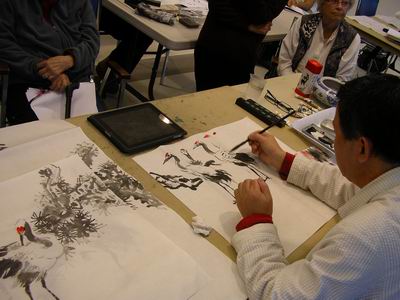 On the right side of the painting, Richard Tang added the smaller branches of the pine tree. 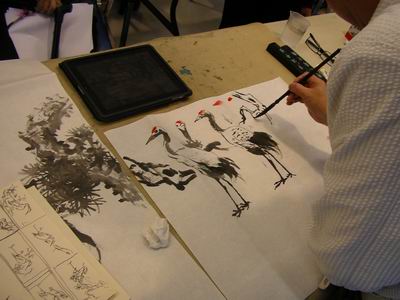 These branches can be added with a smaller brush the produces thinner, more flexible branches and twigs. 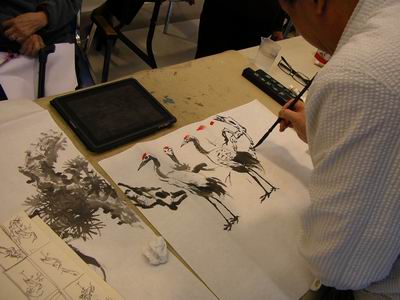 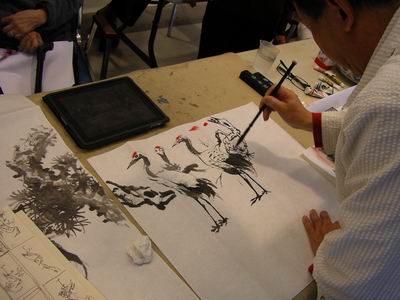 Pine needles can also be used effectively to fill in space such as between the cranes. 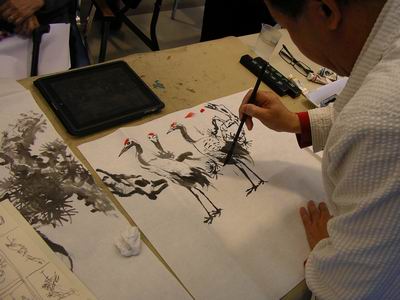 You can add brown colouring to the branches, as you would see in a pine tree. 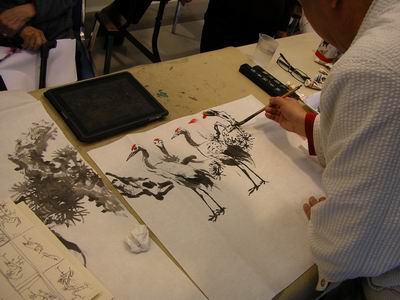 The workshop participants then tried painting their cranes. 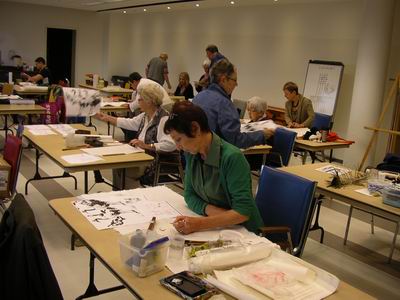 The result was a variety of types of cranes. 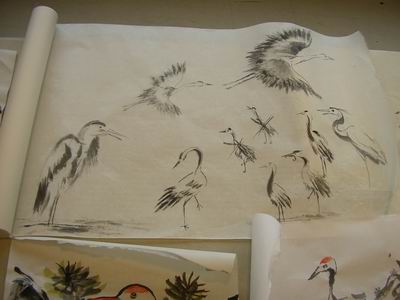 We placed out cranes on a table for all in the workshop to see. 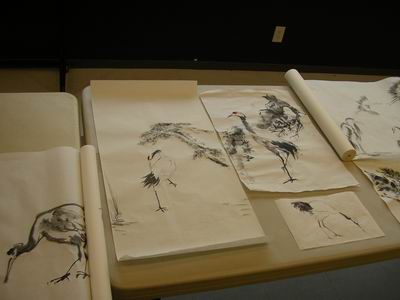 The collection of cranes sparked interest in painting this bird that has fascinated artists for centuries. 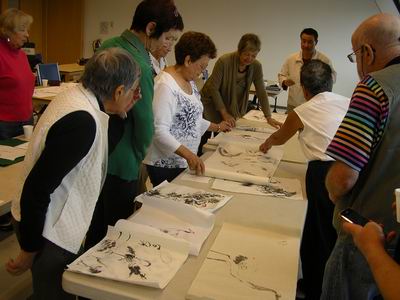 We left the workshop looking forward to painting more birds, pines and nature that surrounds us.