Seals and signatures are a part of a painting. The integrity of a work of art with all parts, including seals, working together for an effect is evident in Noriko Maeda's work. Noriko Maeda is a well-known calligrapher at the Japanese Canadian Cultural Centre. Sumi-e artists study in her classes as there is a close relationship between calligraphy and art. Noriko Maeda began her workshop by showing us many seal imprints. 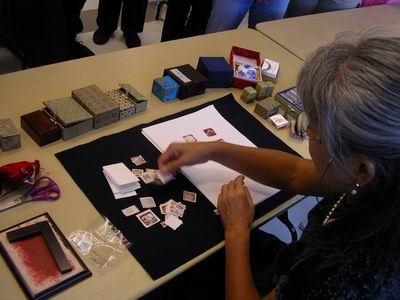 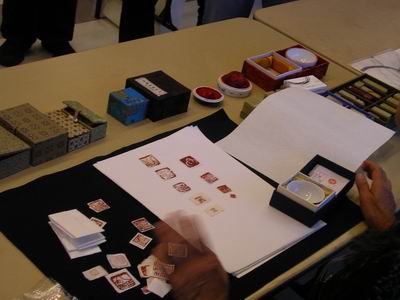 Noriko Maeda asked the workshop participants to print a seal on paper. Then we looked at the results. The best seal impressions had distinctive characters and edges. This result came from placing the right amount of sealing paste on the seal and pressing firmly. 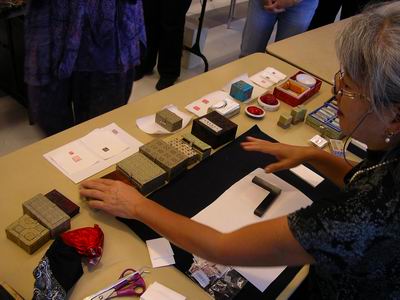 Many artists have red seal paste in disc-like containers. However, Noriko Maeda reminded us that the seal paste should be like a mound. Seal paste is usually vermilion red but can come in other colours. 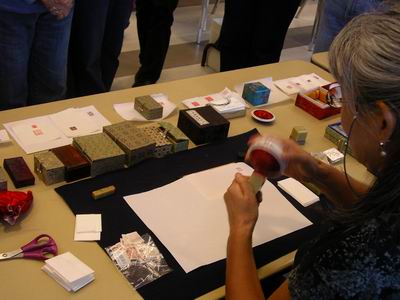 Keep your seal paste moist by stirring it. When the seal paste dries, you should get rid of it. 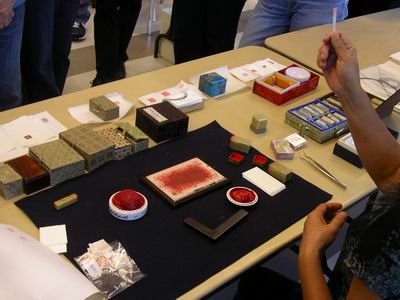 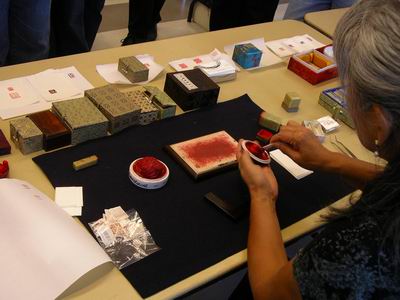 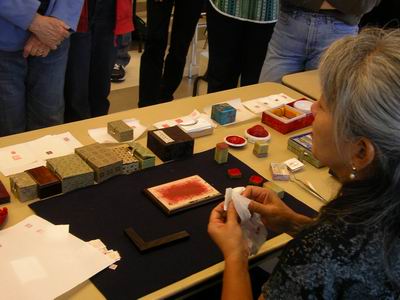 Where exactly should the seal on a painting go? Traditionally, the lower left is the established place. However, it is only a guideline. What is most important is the seal's relationship with the painting. 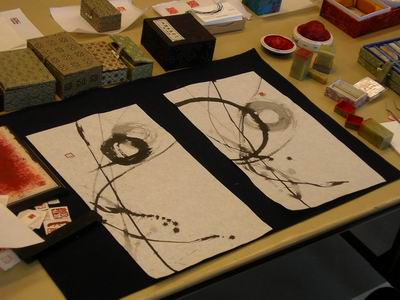 You can also place a seal on the top of a painting. These seals have a meaning that enhances the painting. For example, a seal might contain a saying like: Learn from past history. 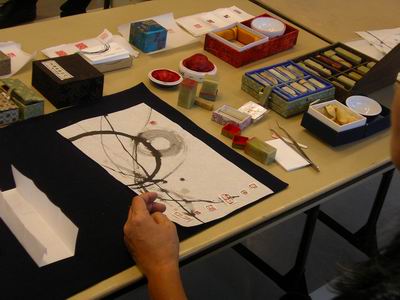 The workshop participants were asked to put seals on paintings. The key was to find the place where the seal best complemented the painting. A seal to the right of this bird seemed a good complement to the painting. 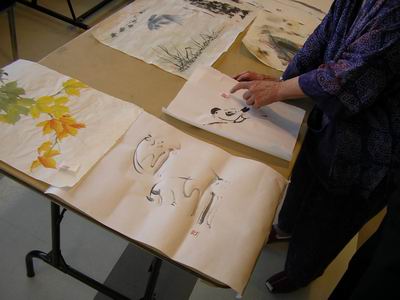 Proximaty to the painting is important. This seal is close to the circle, showing a relation to it. 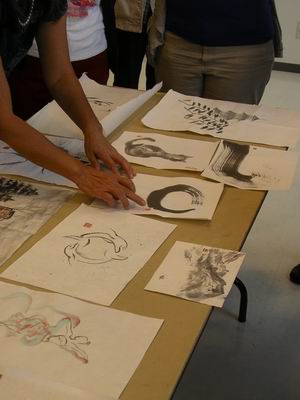 This seal is also close to the abstract painting but is distinctive because the seal is in its own white space in the painting. 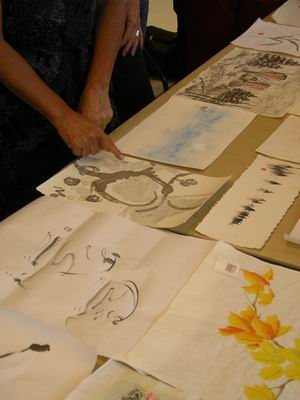 In these paintings, the seal extends the line of the painting. 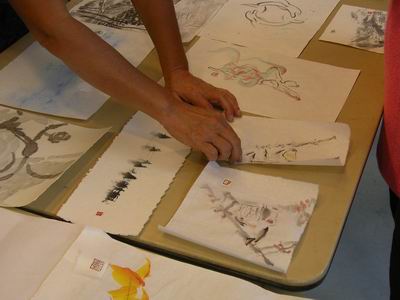 Each person saw the optimal placement of the seal slightly differently. Noriko Maeda showed all participants how a painting was strengthened by thinking carefully about where the seal should go. 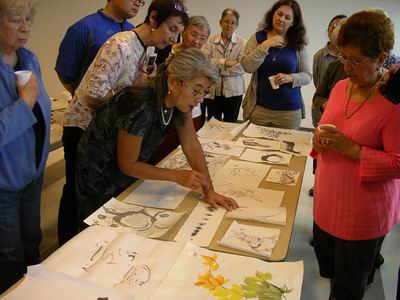 In this painting of leaves, a seal could be placed at the end of the branch. 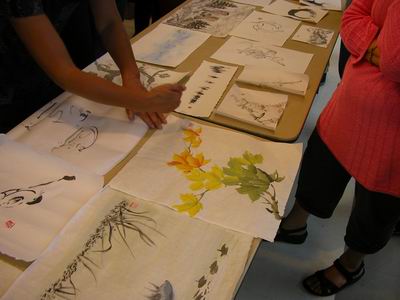 The seal could also be placed below the branch. 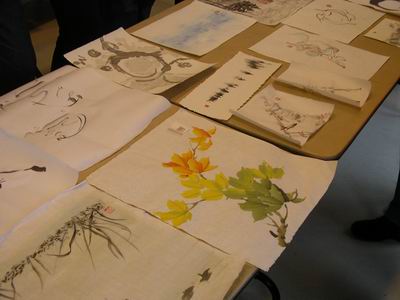 This painting of bamboo placed the seal away from the painting in the traditional lower, left area. 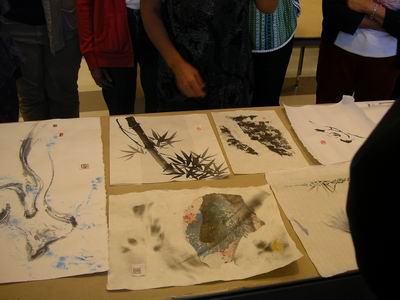 However, closer to the painting and on the right side seemed a better choice. 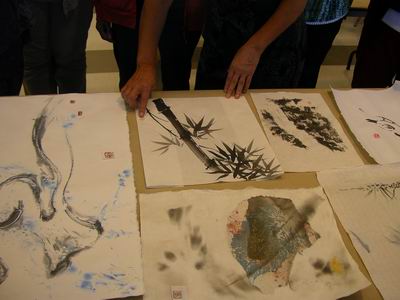 Another effective position was to the left but closer to the bamboo. 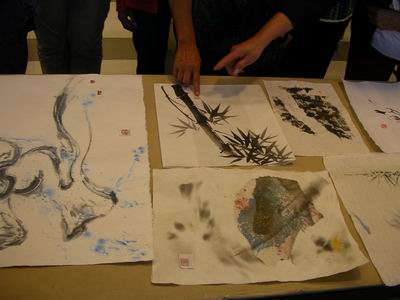 This abstract painting had the seal in a good position, close to the painting but in a complementary way. 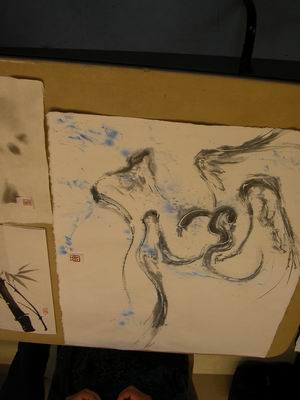 The long brush stroke at the bottom of the painting also provided a good place for a seal. 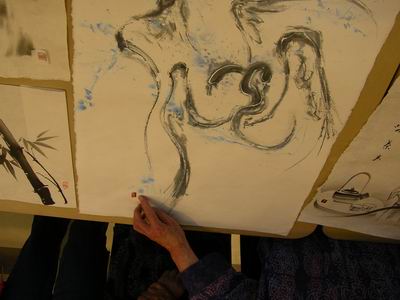 In this tea ceremony painting, a seal beside the tea pot makes sense. 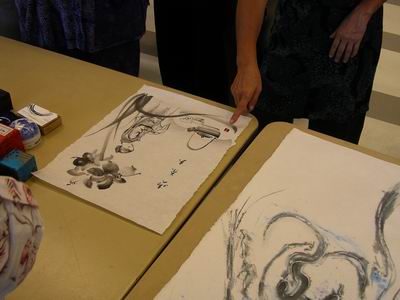 Placing the seal beside the calligraphy, draws the eye away from the tea ceremony and to the calligraphy. Choosing where the seal is placed in this painting depends on the part of the painting you want to emphasize. 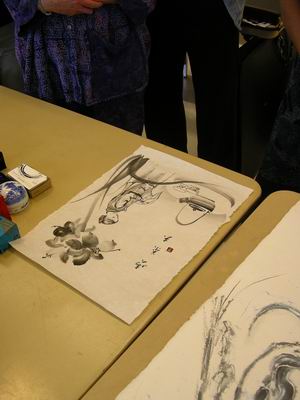 Noriko Maeda brought a collection of her own seals. In addition, Noriko Maeda also teaches classes on creating a seal. 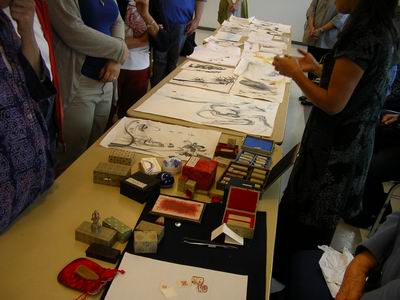 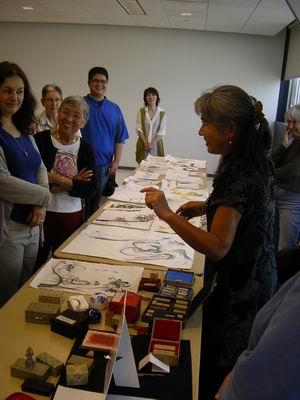 You can learn more about Noriko Maeda in the links section.