Sumi-e painting is adaptable to many subjects including contemporary urban settings. Hiroshi Yamamoto began his workshop on Modern City Scenes by showing several paintings that used sumi-e style and techniques to capture the urban landscape. 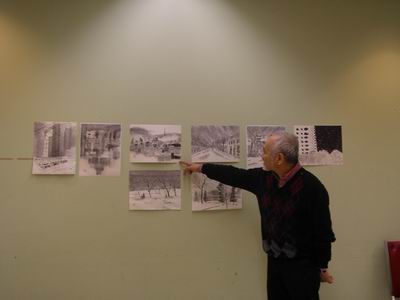 Like classic landscape paintings, the cityscape of buildings and towers simplifies the structures to their basic shape. Then a few details differentiates one building from another. 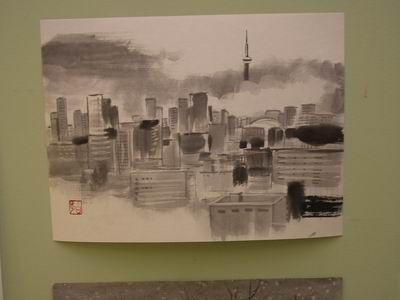 A few cars, natural elements like snow, a neon sign turn a city setting into a dynamic painting. 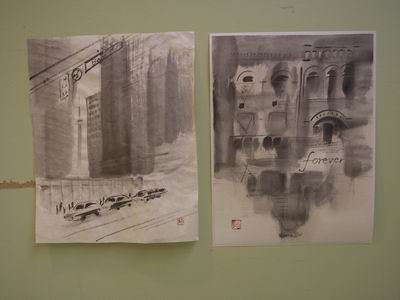 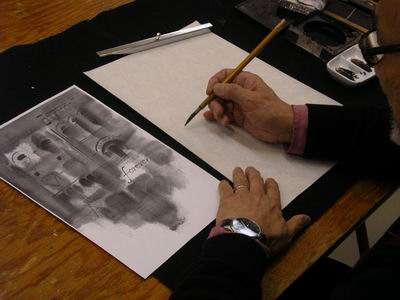 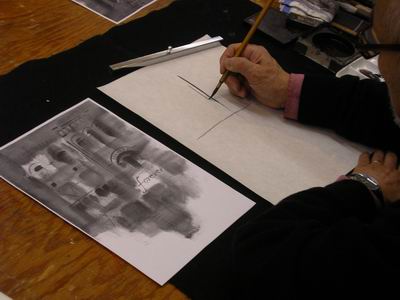 Then details were added for arches, windows and doors. 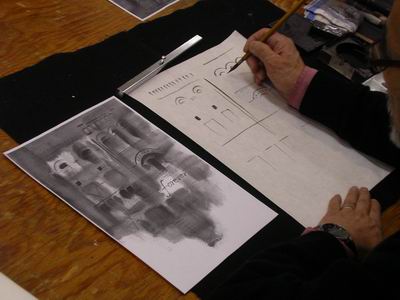 Shading filled in the windows, doors and features of a building. 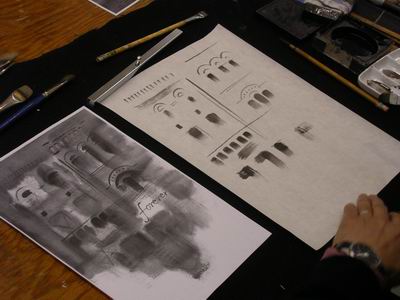 A cityscape of buildings appeared. 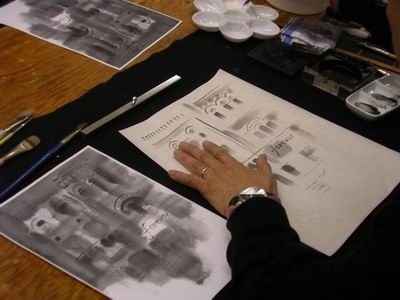 Then Hiroshi Yamamoto used the hake brush to add light grey ink over top of the painting. The hake brush strokes should be horizontal and vertical to enhance the rectangular shapes of the buildings in a city. 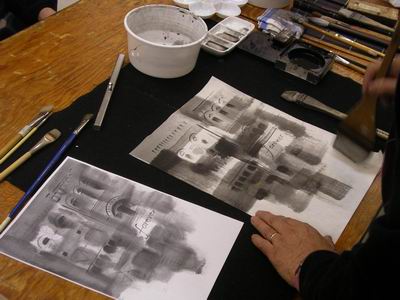 Hiroshi Yamamoto turned to another familiar scene in the city: an older home. This painting was in winter so Hiroshi Yamamoto began by dipping a brush in milk and tapping it against another to produce falling snow across the painting. 2% milk works best. 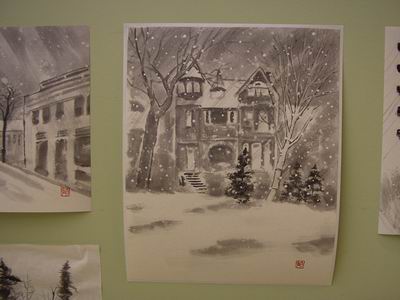 The trees on each side of the house were added. Since the splatter of milk had been already done, these trees and anything contributed to the painting had falling snow in front of them. 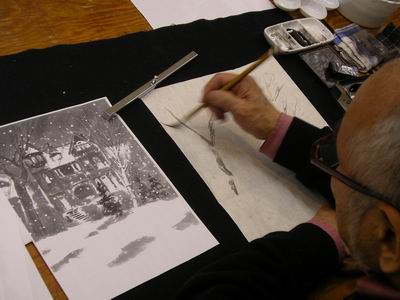 Some smaller pine trees filled out the front lawn. 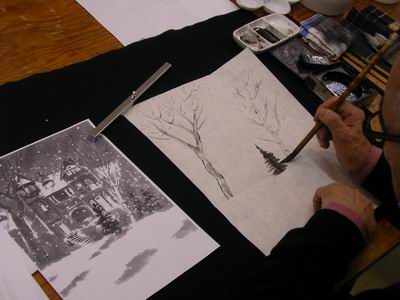 Hiroshi Yamamoto began to build the house structure. He suggested that sketching an outline of the house in faint ink was helpful. 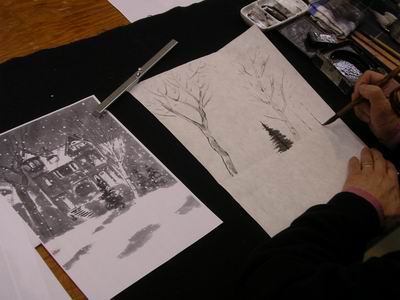 Similar to the previous painting, windows and arches were created. 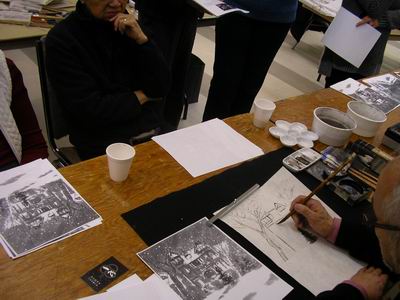 The frame and details of the house such as steps and window sills filled in the house. 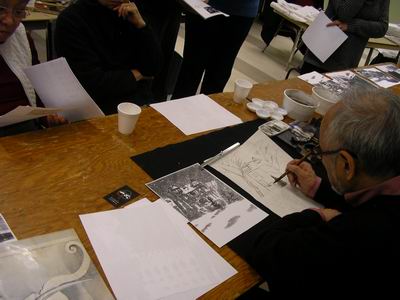 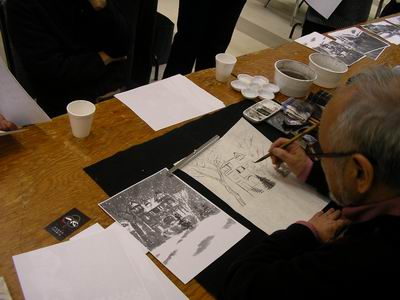 The sides of the house were created with a grey wash ink. The snow flakes, from the splattered milk drops, stood out. 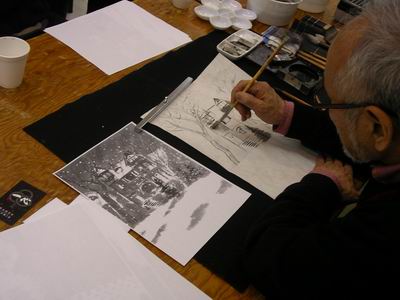 A walkway was added to the front. 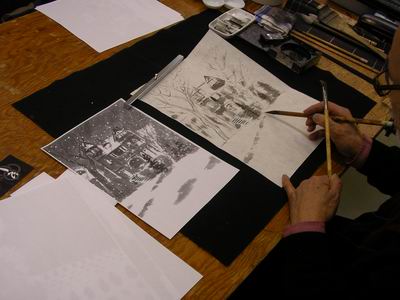 Hiroshi Yamamoto returned to the large hake brush to add the sky. He angled the brush strokes, which gave a strong presence to the winter sky. 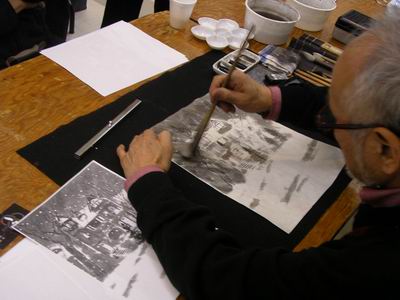 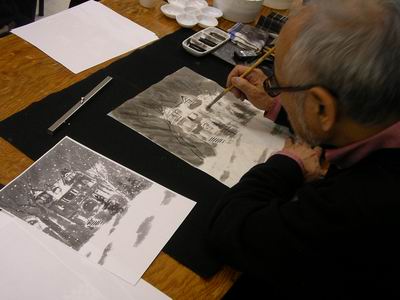 Hiroshi Yamamoto reminded the class that the dark ink would lighten when dry to produce the right effect of a winter day in the early evening. 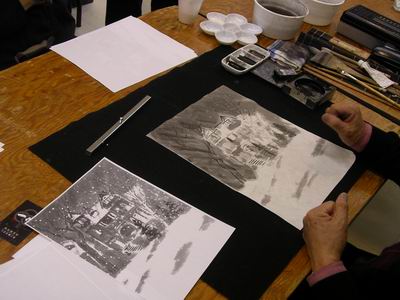 A variation of the snow technique with milk can also be used to create a rainy scene. 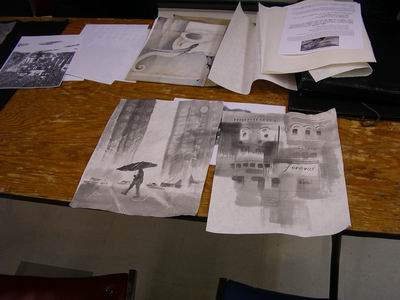 This interesting painting combined a snowy winter night and an apartment building with trees from a nearby park. 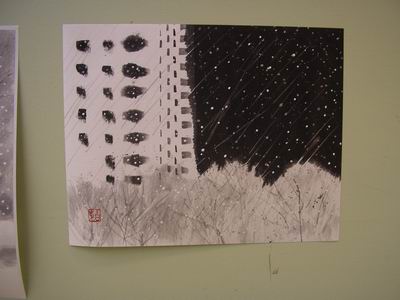 Our turn to paint led to some creative interpretations of the streets all around us. 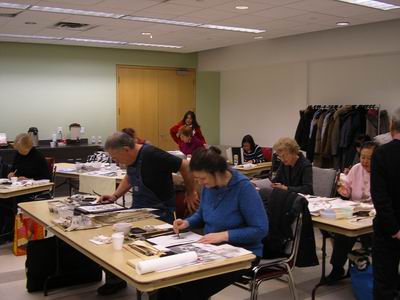 This city skyline blended the abstraction of buildings with well-known landmarks. 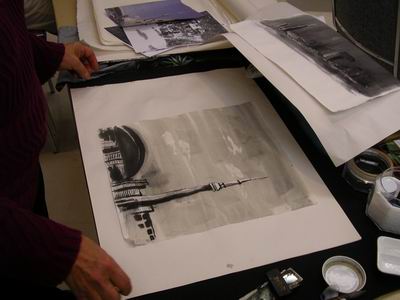