Bright colours are likely what you think of when you hear the word chrysanthemums. However, Moira Mudie began her chrysanthemums workshop by demonstrating brush strokes used in the stems and veins of the leaves, leaving the flower to later. One of the most practical brush strokes for lines is the rat's tail stroke. It begins by pressing, then comes the line and finally a hook ends it. 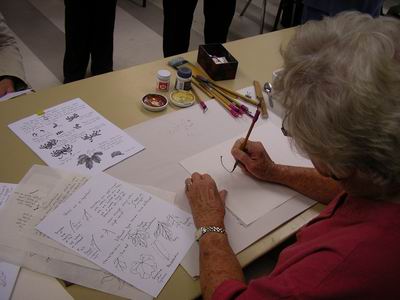 Moira Mudie's notes on chrysanthemums used this brush stroke for many parts of the chrysanthemum. Another stroke Moira emphasized was the wishbone. 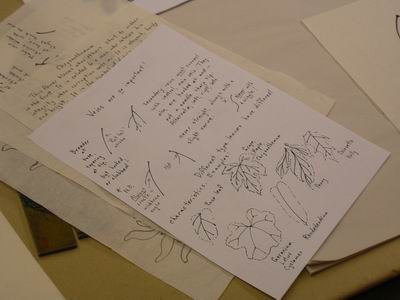 The wishbone is a way of taking a line such as a vein or twig and curving it back toward the main branch or central vein. Yet, as Moira Mudie pointed out, many artists actually paint this line curving backwards, which is not natural. 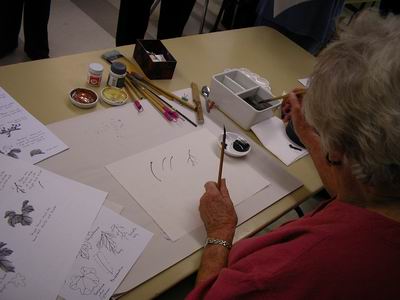 The leaves were the next element to focus on. The notes from Moira showed how a wet brush with some ink could create effective leaves. 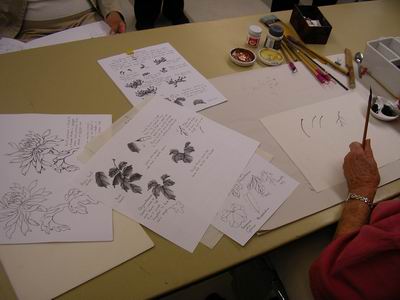 Laying the side of the brush on the paper is the key to creating the leaves. 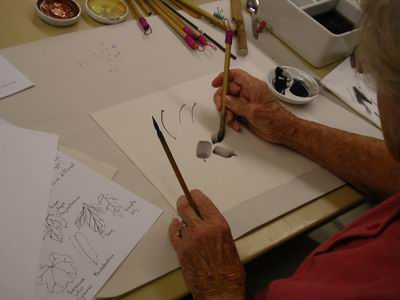 A slight tip created the tip. Then Moira added the veins. 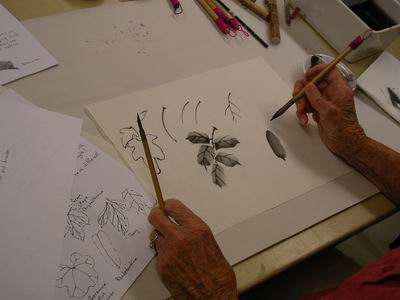 Another approach to the leaf that Moira demonstrated was the outline. 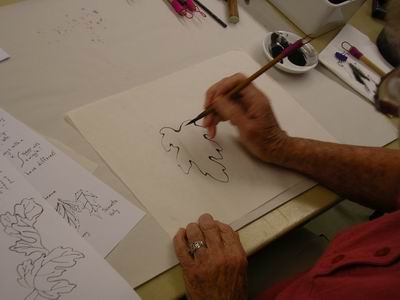 Then using the rat tail and wishbone strokes, Moira filled in the veins. 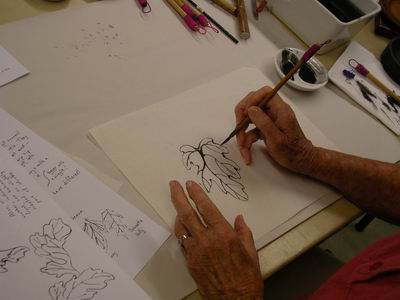 Turning to the flower, Moira suggested a brush stroke that began away from the centre of the flower and ended coming towards the centre. 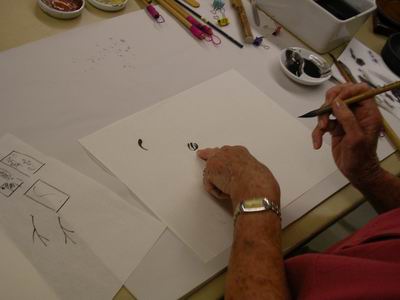 By repeating the pattern, the chysanthemum flower emerged. 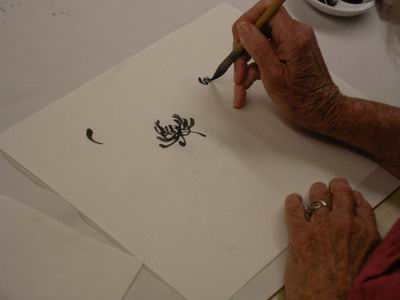 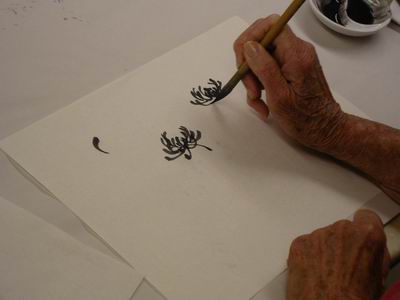 Moira begin working on a composition to tie the parts together for the artists attending the workshop. Moira began with the leaves. 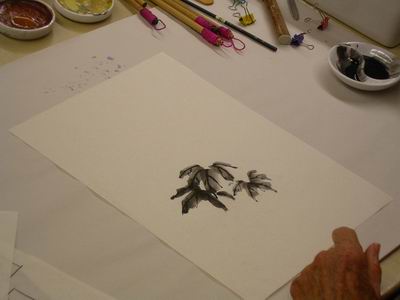 A colour for the flower adds a vivid and dramatic effect to the composition of the painting. 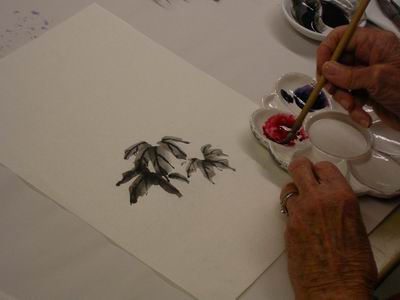 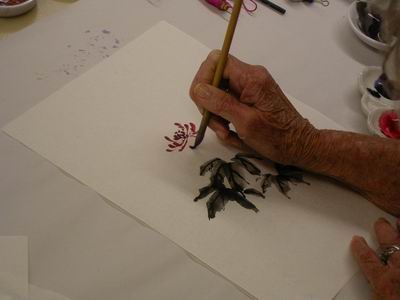 Observant workshop participants watched as the painting came together. 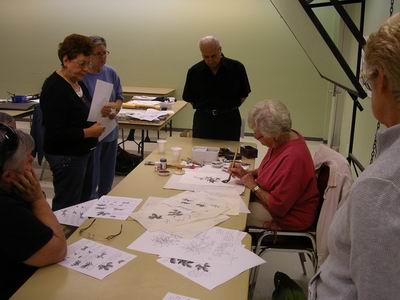 A variety of small and large flowers offset by a variety of green leaves created an engaging painting. 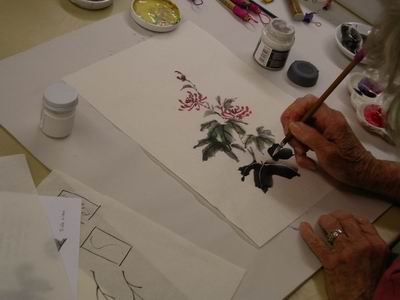 The complete work also had an effective layout on the paper, something that was also discussed in the workshop. 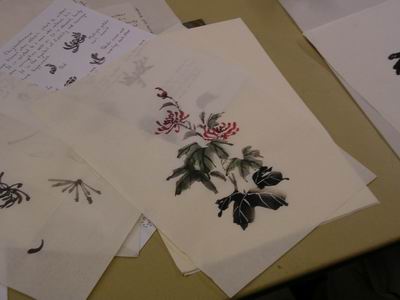 White ink on black leaves was another approach shown by Moira Mudie. 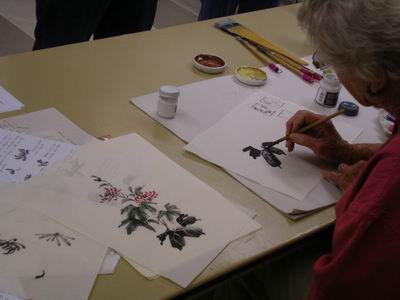 White ink can be used for the veins or to reflect light on dark leaves. 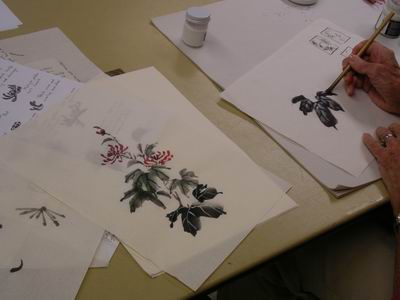 On the wall, Moira pinned some of her chrysanthemums. Paintings with many colors and shades can be painted over days or weeks. 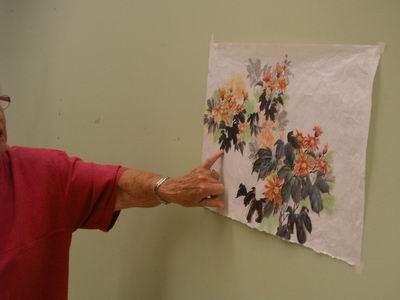 A black and white chrysanthemum can use a tiny coloured bug crawling across a leaf as a contrast. 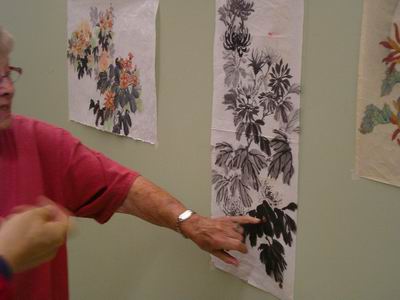 A moon was used for a backgound to this chrysanthemum. Moira suggested to play with the position of the moon. 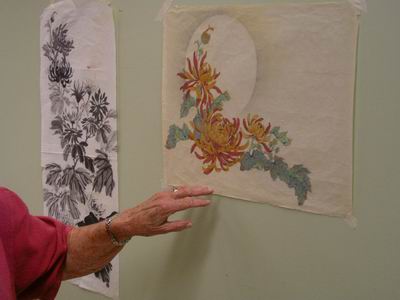 A dynamic chrysanthemum with a spontaneous feel can also make a memorable painting. 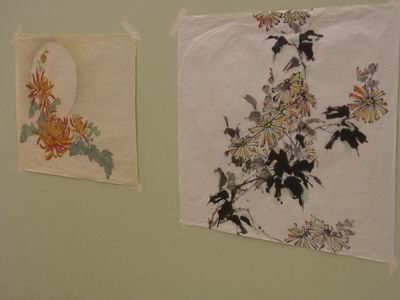 Moira demonstrated a technique to add a moon to a painting. First cut one out and use a lead pencil arount the edge. 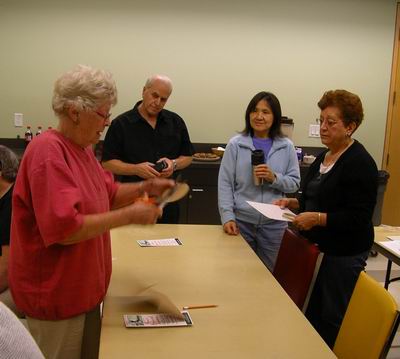 On the painting, use some paper to spread the graphite away from the moon cut out. 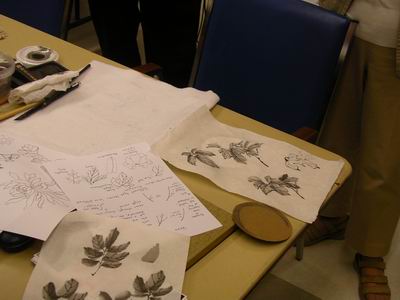