Sumi-e ink and rice paper lend themselves to countless possibilities of tones. Adding a wide brush stroke over a surface that already has had these brush strokes results in a surprising effect that is part abstraction and part reality. Hiroshi Yamamoto demonstrated this technique to create a type of abstract landscape. He began the workshop with a few minutes of meditation and then displayed painting that showed the direction he wanted to take the class. 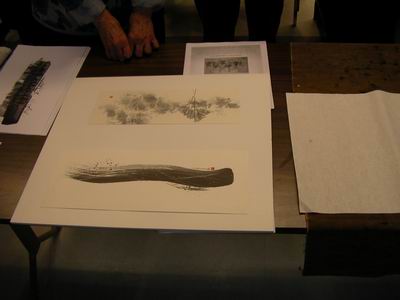 Hiroshi Yamamoto began by drawing lines with a fine brush. He used milk on the brush though some lines had a little ink. You can use any milk but 2% milk seemed a good balance with not too much fat which can affect the result. 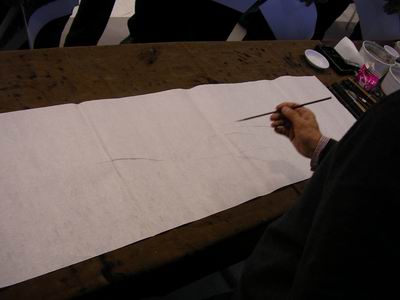 Tapping a brush with milk added some spontaneous drops. 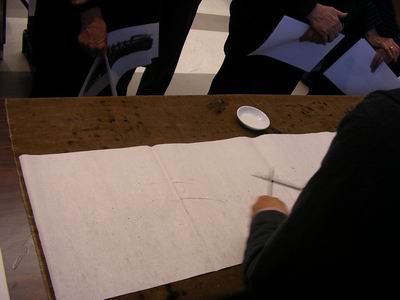 A wide brush was soaked with water and ink. 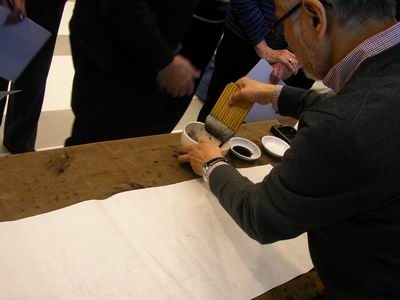 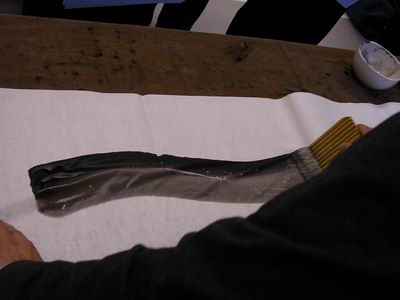 Afterwards, Hiroshi Yamamoto tapped some ink about the work. 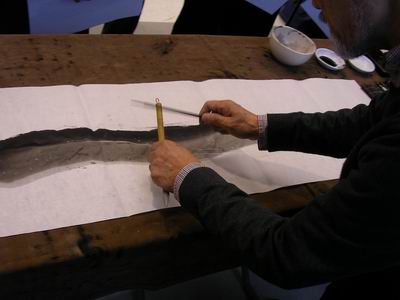 The final work was an abstraction with a hint of a landscape. 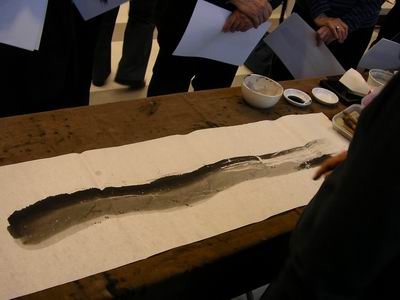 The workshop participants began their own experiments with this technique. 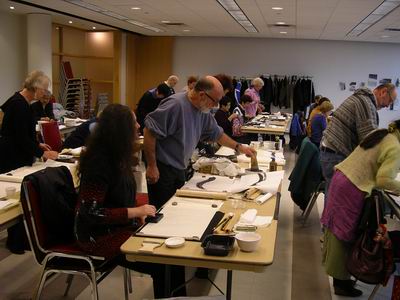 Hiroshi Yamamoto helped us individually. He had handouts that gave us other possibilities to consider such as using a tree as the starting point of a painting. 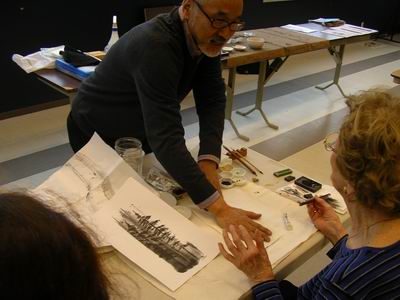 Hiroshi had paintings that showed variations of this technique. 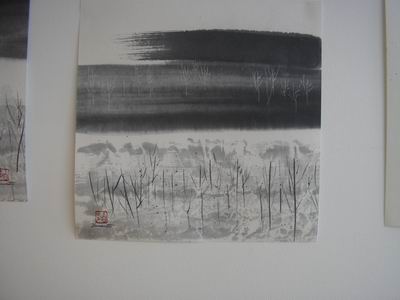 A tree was created using the side of the brush to paint leaves over the structure of a tree trunk and branches. 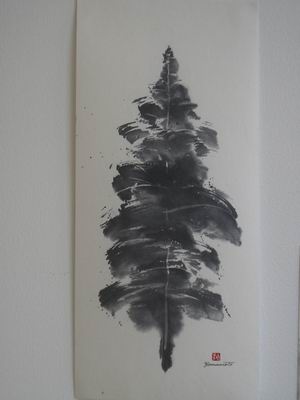 A mix of milk, black ink and the wide, watery brush stroke created an image of a forest. 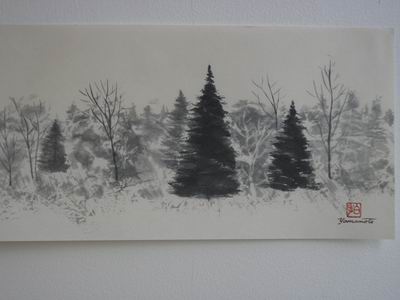 Hiroshi Yamamoto returned to show another way of creating an abstract landscape. 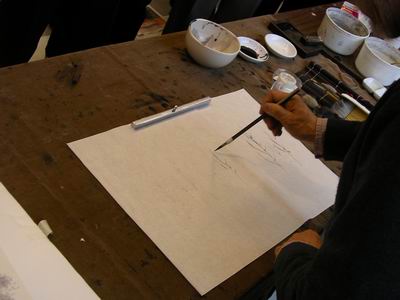 Starting with trees using milk, he added the leaves with ink. 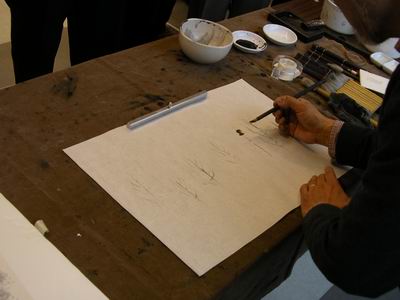 The effect was a forest of pine trees and trees with bare branches. 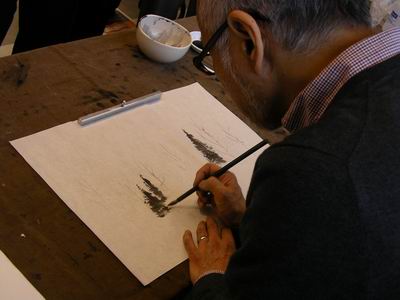 Hiroshi Yamamoto crumpled the paper and later added brush strokes that created the look of rocks. 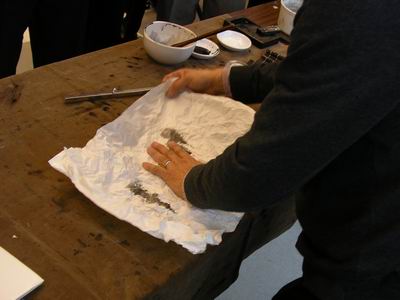 Spraying water on the painting, Hiroshi Yamamoto took time to show how to mount this painting. 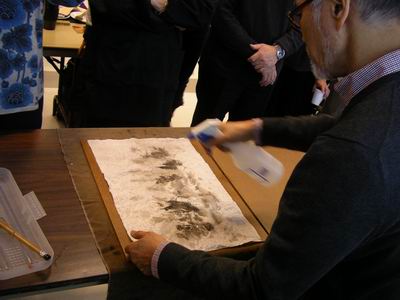 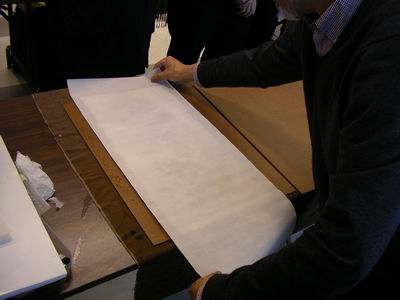 A small amount of glue is added with water. Art stores sell this glue. If you are concerned that the glue be acid free, Yes! is a product to consider. 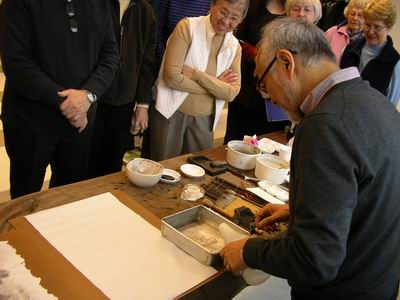 Hiroshi painted the glue on the backing paper, starting from the center and painting out to the edges. 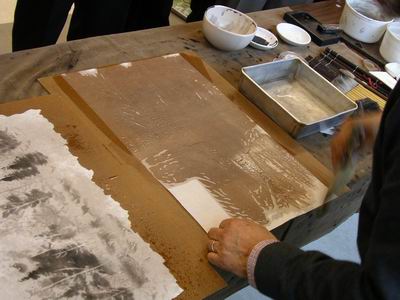 Then the backing paper was put on the back of the painting. 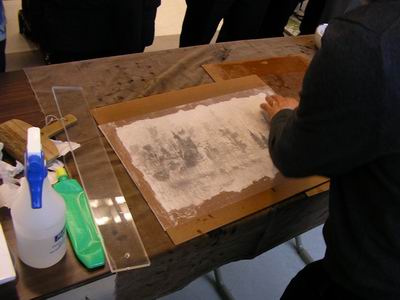 Placing a piece of paper under a corner is helpful so that you can lift the mounted painting when it is dry. 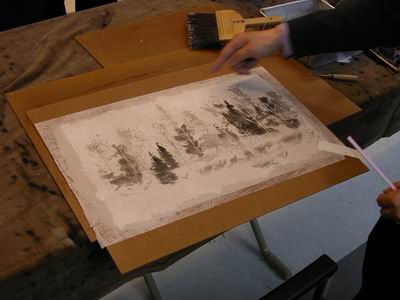 The workshop participants posted their paintings on a wall for a show-and-tell session. 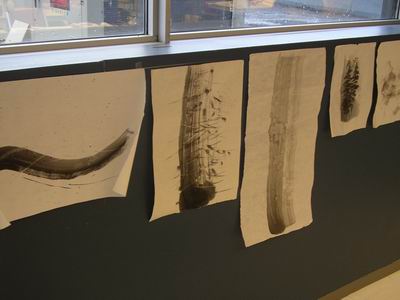 The creativity of the paintings sparked many comments. 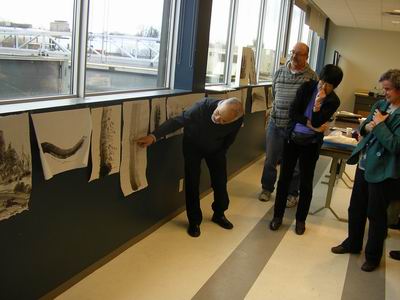 A playfulness was evident in many paintings. 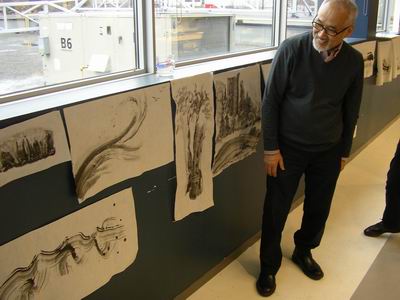 You can find more information about Hiroshi Yamamoto in the links section.