Peonies are vibrant flowers whether seen on a branch or in a painting. Creating them with a brush is not simple and KK Li's workshop called Peonies showed that you must pay attention to details. KK Li's brush kept the tip pointed to the base of the flower as he began painting the petals. 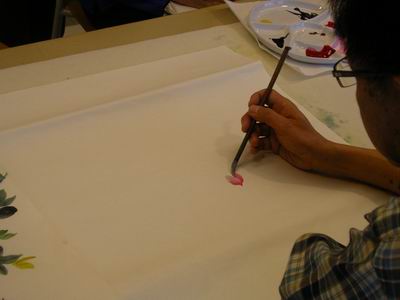 The petals, created with a mix of red and white paint, started with the base and then by pressing the brush created the petal. 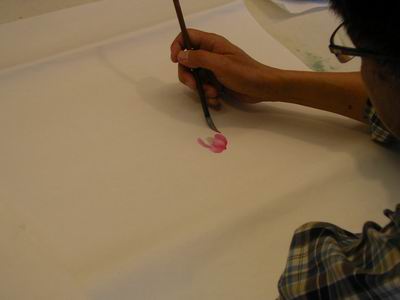 The first peony flower left white space in the center for the yellow stamens that would be added later. 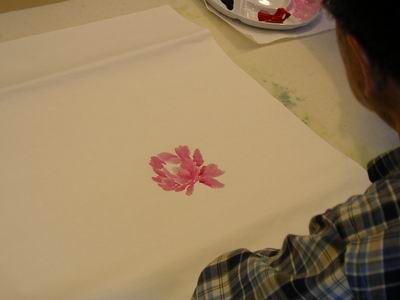 The second flower was slightly angled from the first. When painting peonies, the composition with several flowers at different periods of growth and different angles should be considered first. 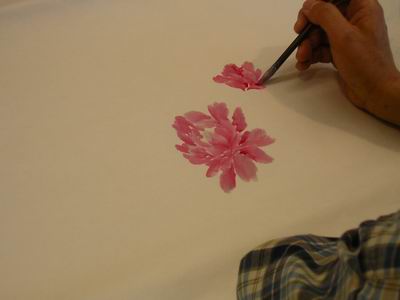 KK Li added several more peonies including one beside the first one but facing sideways. 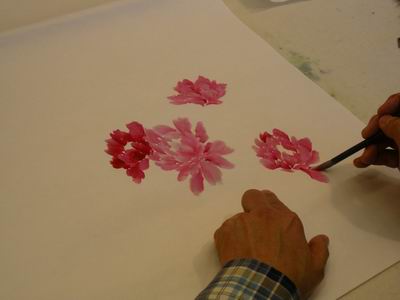 Leaves were added beginning near the petals. Leaves need to be added as thoughtfully as the petals of the peony, with variation in size and darkness. 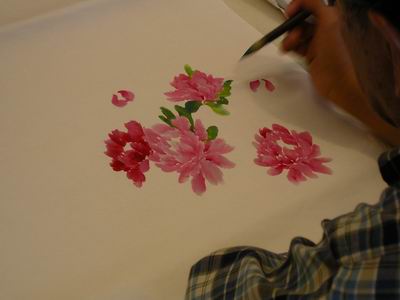 The leaves should be started slightly away from the petals so the green and pink colours do not run into each other. 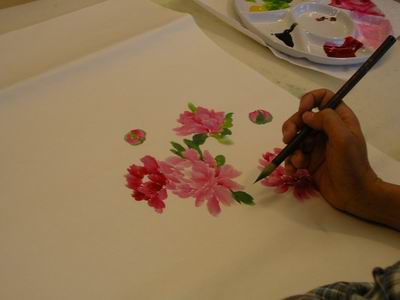 KK Li continued adding more leaves as there are more leaves than peony flowers in a typical painting of peonies. 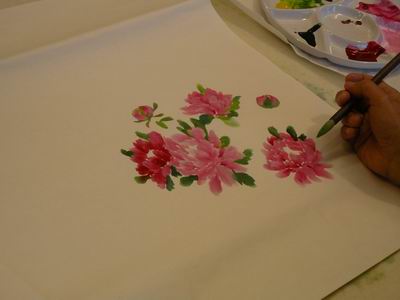 As he worked on the leaves, KK Li started layering them so that leaves filled in more of the composition. 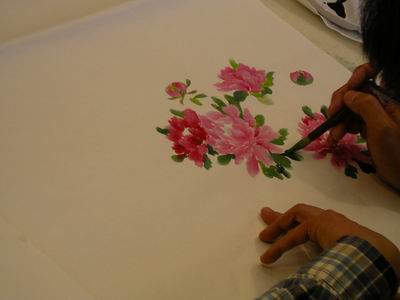 He also varied the size, tone and angle of various leaves. 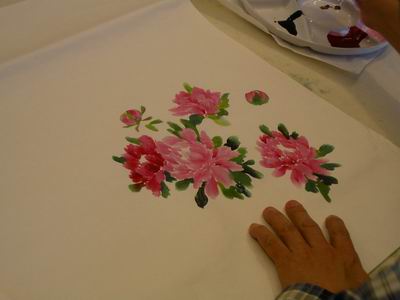 Leaves were added by themselves, away from the peonies. 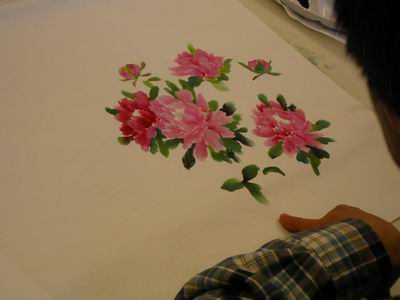 Older, larger leaves were painted by pressing the brush. 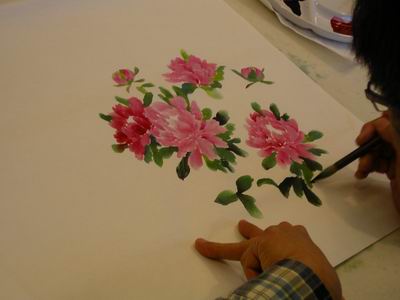 He added more leaves to the lower part of the bush to make the composition similar to a real tree. 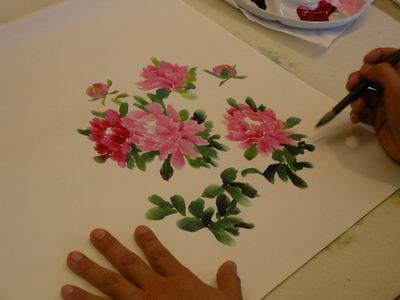 The workshop participants saw KK Li build the painting into a proportioned and realistic floral work. 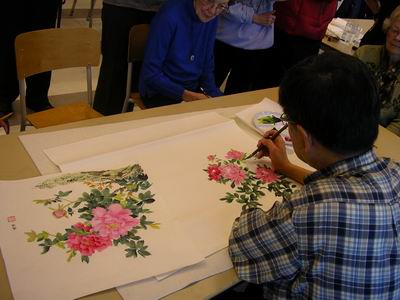 The branches should be done in a stroke that pauses occasionally to look like the sections of a branch. 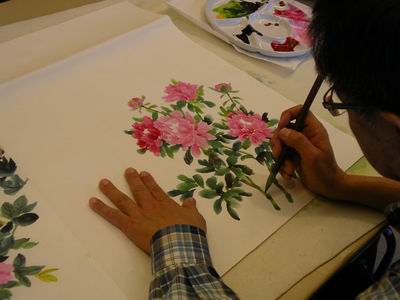 KK Li also added some thinner stems that were completed in a single brush stroke. 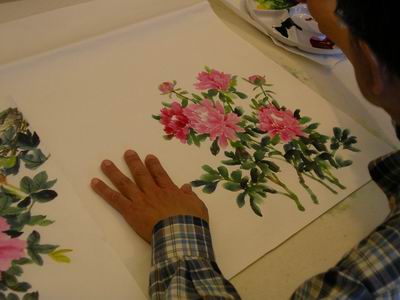 Yellow stamens were added to the center of the peonies. 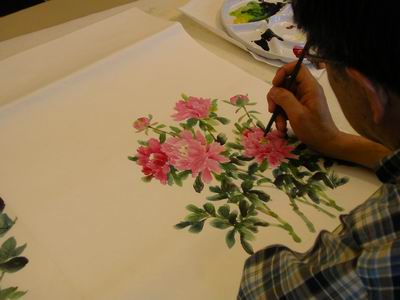 KK Li also showed painting the grape using two strokes to create the rounded grape. Also, he showed how to paint the peony only in black ink, however, KK Li suggested that the ink should be mixed with some colour such as a dark green. 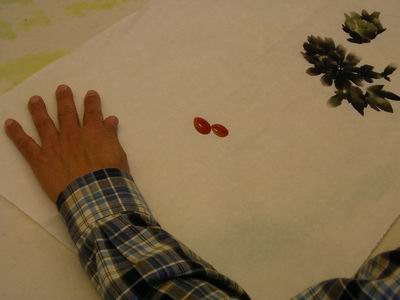 For the grapes, KK Li painted broader leaves and showed how to shape the cluster of grapes. 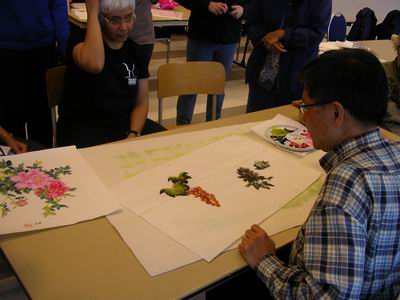 Then it was our turn to paint peonies though KK Li helped us individually. 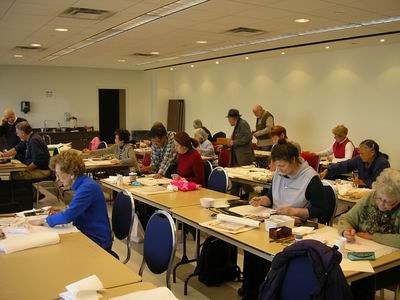 Grapes need to be laid out with a tapered structure, broader at the top of the cluster and narrow at the bottom. 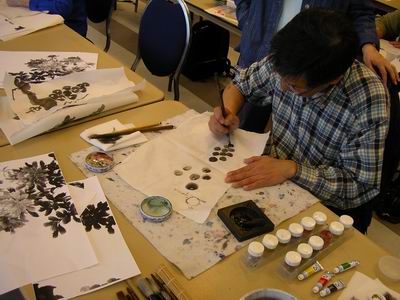 A sequence is one way of painting the peony petals starting near the base and working outwards. KK Li also showed how to paint the bigger, broader leaves using the side of the brush. 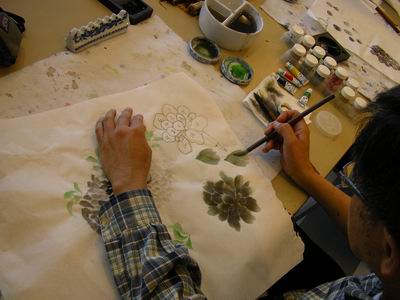 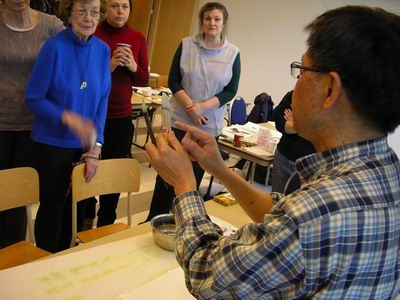 Paint the background in steady, smooth strokes and in the same direction. 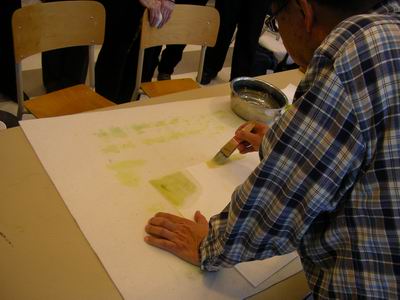 We gathered for group picture with KK Li. 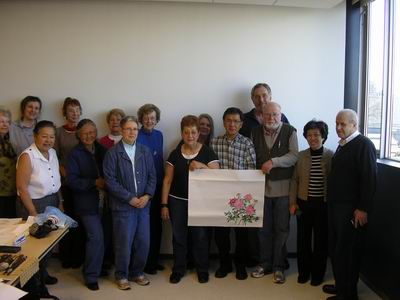 It was time for us to continue painting more peonies and many other flowers using the techniques demonstrated by KK Li.