Painting winter scenes means thinking in white and how to produce that whiteness. In Moira Mudie's workshop, the method used was the white rice paper itself. As Moira showed, you must think of the areas that form the edge of the snow. 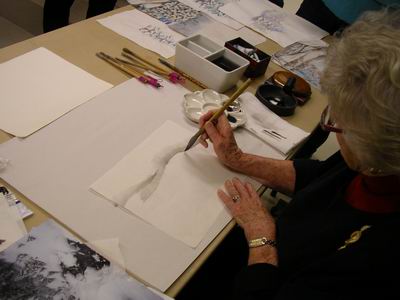 Moira Mudie began by using clear water to paint snow on the branches of a pine tree. 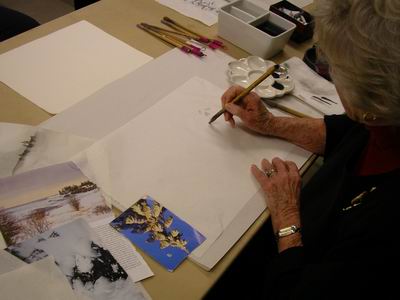 With a finer brush, Moira added the pine tree branches peeking through the snow and just below the snow. 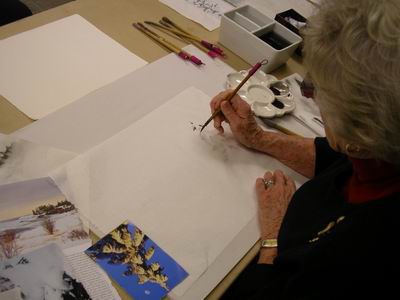 As Moira added the parts of the branches that could be seen, the tree with the snow emerged. 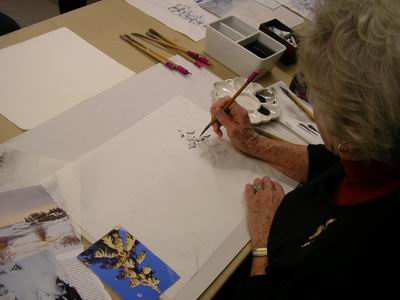 Continuing while the snow created from the clear water still lay wet on the paper, Moira added the underlying branches that gave the snow-laden tree its structure. 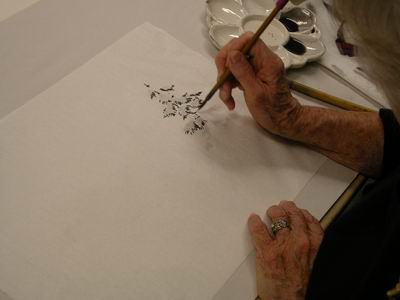 The result was a pine tree that you might see after a big snow storm. 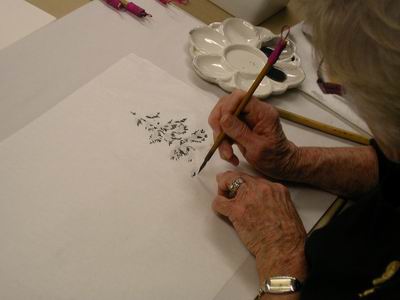 With a large brush and blue ink, the tree was outlined by a winter's day sky. 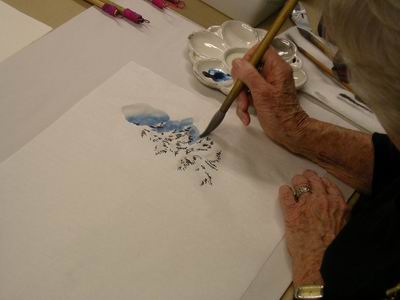 Both sides of the tree were outlined by the blue ink, which made the tree stand out from the snow. 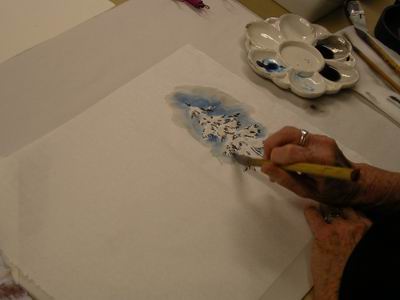 More details were added with ink such as parts of the trunk using a burnt sienna paint. 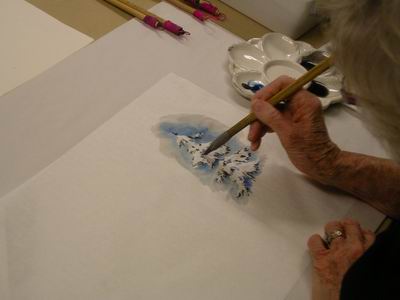 A second tree was added. This one was not detailed and it was painted by adding a sketch of some boughs with snow on them. 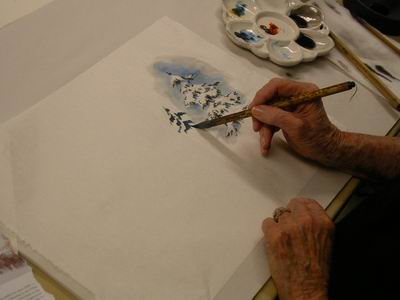 Moira Mudie then started to add other elements to the winter scene composition such as drifts of snow and, peeking through them, dry grass. 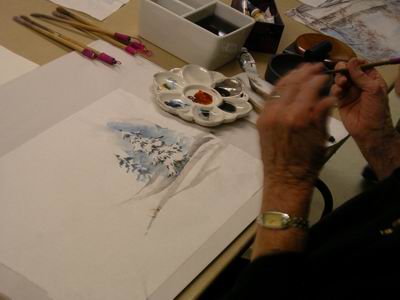 For the snow lines, Moira started with a fine point, added a rounded hill, and then tapered off to another point. 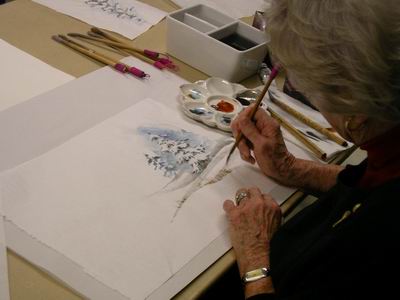 For distant trees, Moira Mudie used a large, wet brush for the forest in the background. 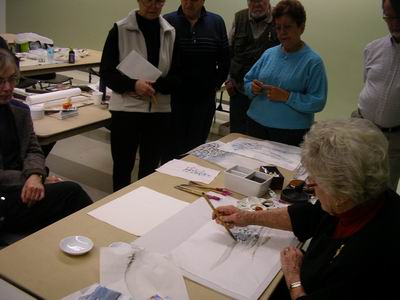 The trees were added into the wet wash, which worked because trees in the distance are slightly blurred. 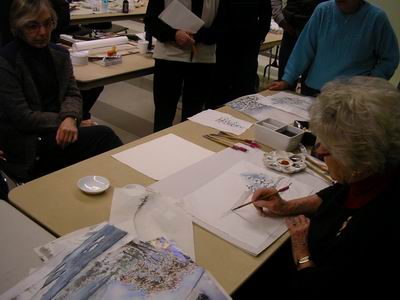 The distant trees can be created in muted shades of green and brown. 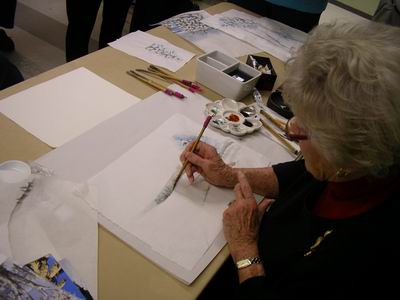 The result was a composition that had many of the elements you would find in a painting set in the midst of winter. 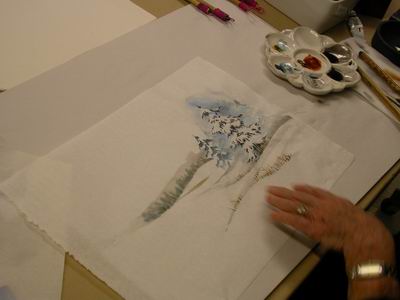 Moira Mudie showed how to mix burnt sienna and blue paint to get a winter green color. 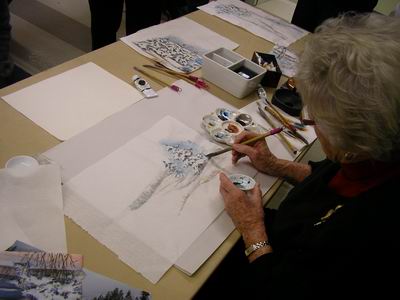 Moira brought many paintings of winter scenes for the workshop participants to study. 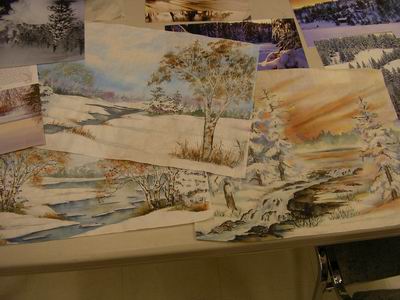 Our turn to paint had everyone thinking winter. 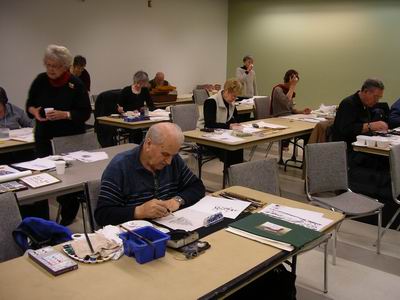 Moira did help us out when our winter scene needed some assistance. 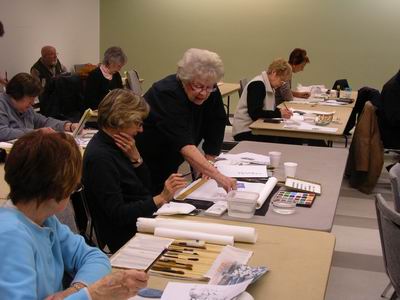 Pine trees in winter can be painted completely in sumi-e ink. 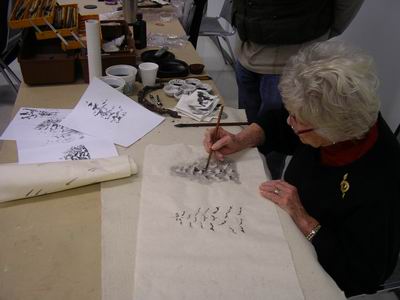 Returning to her earlier painting, Moira demonstrated how to get the effect of a shimmering sky. As before, Moira Mudie began by using clear water for the areas that would remain white. 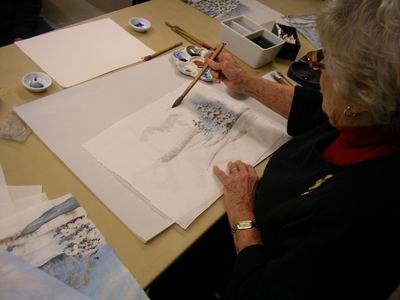 A large brush with light blue paint filled in the sky. 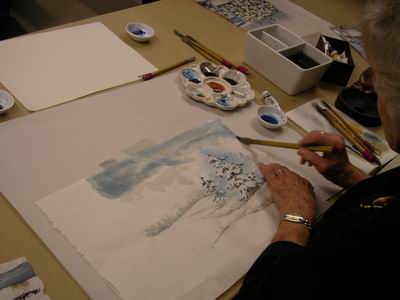 Once dryed, the effect of a shimmering sky appears. This technique can also be used for rivers and ponds. 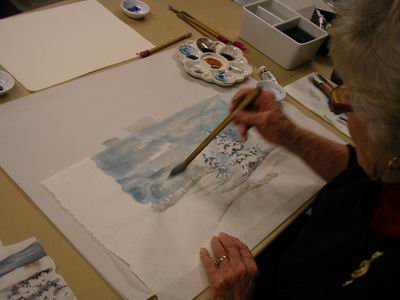 Moira Mudie's winter scene brought the beauty of winter, which we sometimes forget, to life. 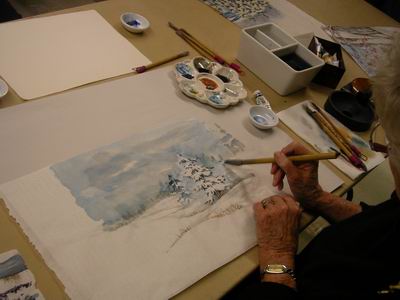