Dynamic, memorable paintings can be created when you use the wax resist technique. The technique, demonstrated in Diana Bullock's workshop, creates an unpredictable design that becomes the starting point of a vivid painting. 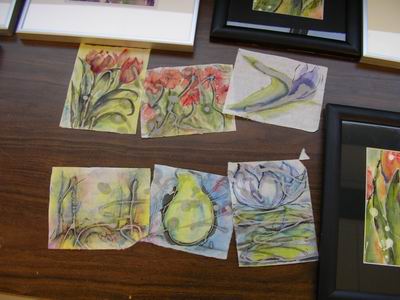 Diana brought several paintings created with the wax resist technique to get the workshop participants thinking of the possibilities with this technique. 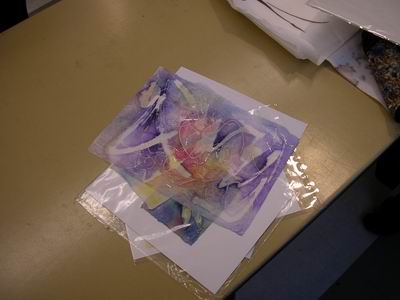 To prepare rice paper with the wax resist technique requires a few tools: a can to melt the wax and some tubes to drip the wax on the paper. These tubes can be found in stores that supply them to Ukrainians who use them to decorate Easter eggs. When you do this yourself, Diana suggested, you should have lots of newspaper to catch the dripping wax. 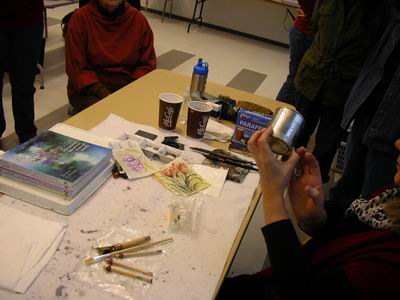 Diana Bullock also had a tool to squeeze cream from. Cream is an alternate approach to wax but produces a similar effect. 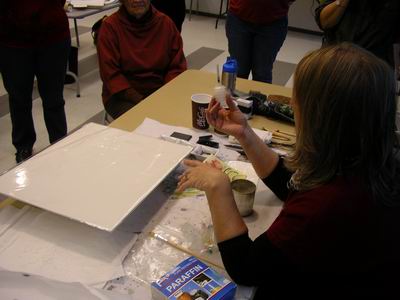 The wax introduces a random element to the painting as was illustrated with a range of paintings that Diana showed. 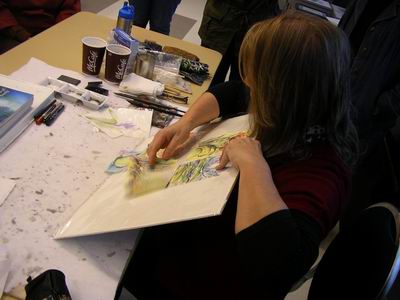 Diana had already created the paper with the wax resist technique and demonstrated how an artist works with it. 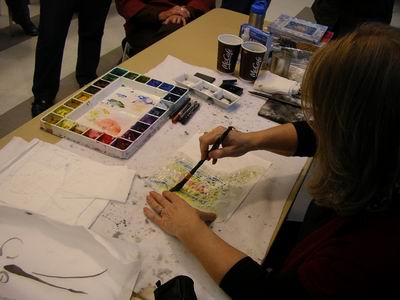 At the time you add the paint, you can use the wax to enhance a painting with a subject in mind or you can choose to create something more abstract. 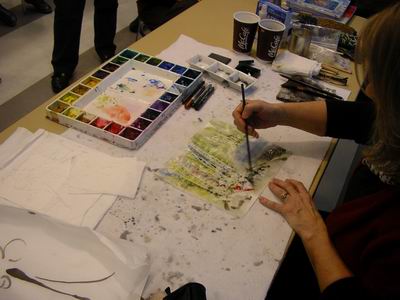 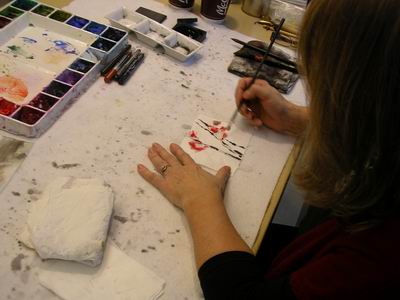 What happens if you make a mistake? Diana Bullock had some tools that can help out. 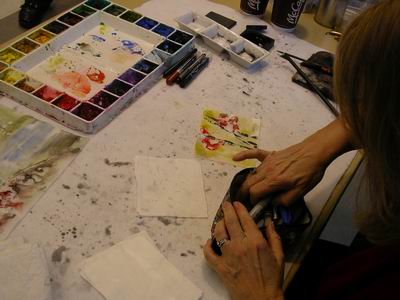 A sumi-e pen, available at art stores, lets you add a line to fix up a painting. 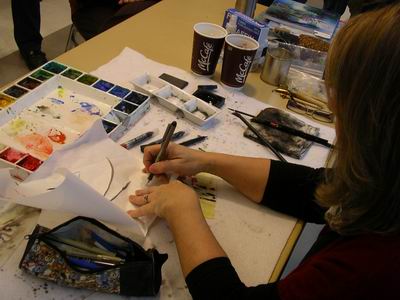 Then it was time to pick up the paintings created and move on to another aspect of the wax resist technique. 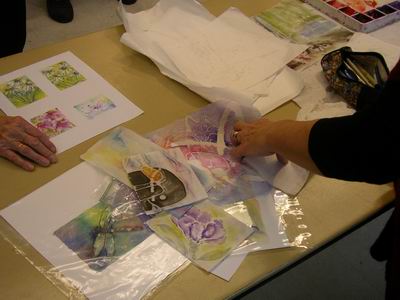 The paintings were placed between absorbent newsprint paper and ironed. 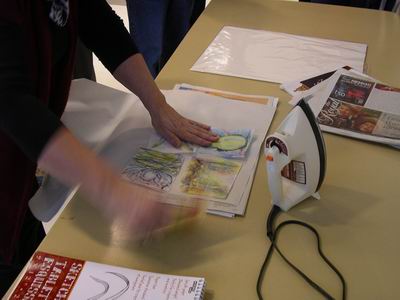 The result was white lines and curves where the wax had been and brighter colours. 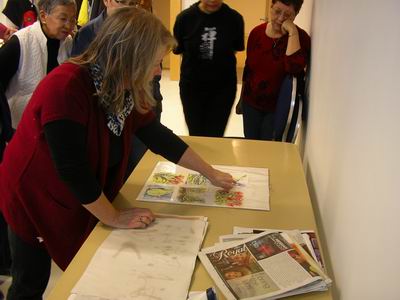 It was our turn. Diana helped us out by giving us paper that had already been treated with the wax. 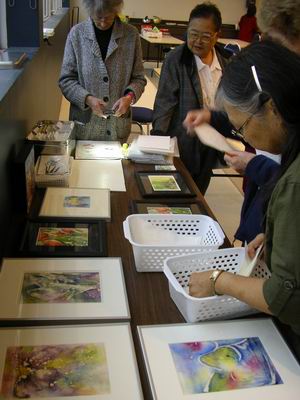 The workshop participants had fun with this experimental approach to sumi-e painting. 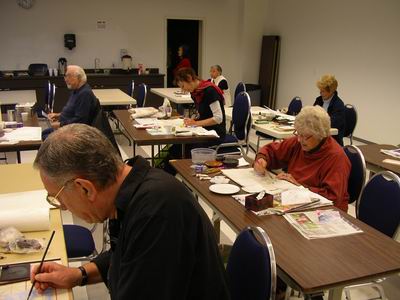 Diana explained that there are no rules to painting with this technique, painters should explore what seems to work best for him or her. 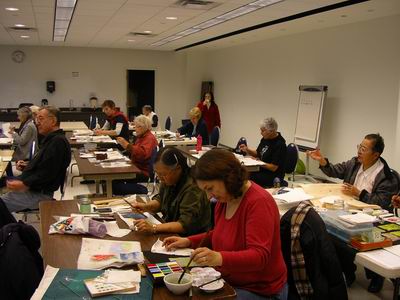 These paintings used sumi-e ink only to create some intriguing art. 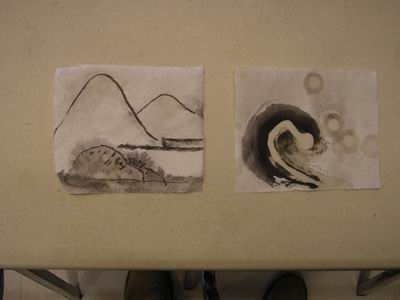 These colourful works might be interpreted as a heart, a fish, and some abstracts. Interestingly, the creator often did not see what others found in them. 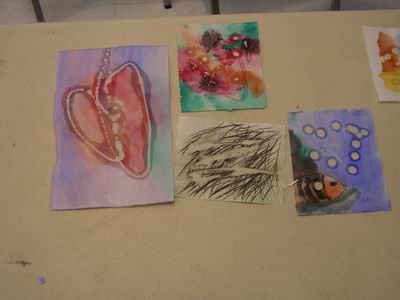 Diana joined the workshop participants for a show-and-tell session. 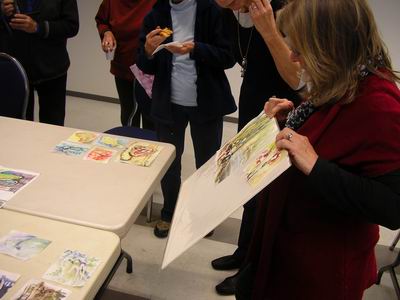 Many paintings had been created.

This painting added a floral theme to the wax treated paper. The red wash heightened the image. 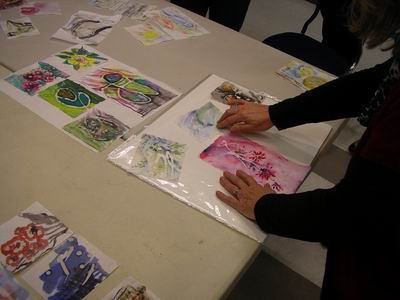 Each artist's group of paintings were collected. 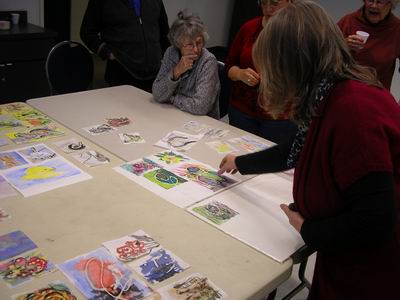 This set of paintings had many interpretations from the group of workshop participants. 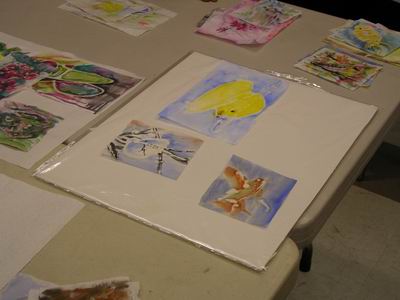 These dynamic circles and shapes also grabbed our interest. 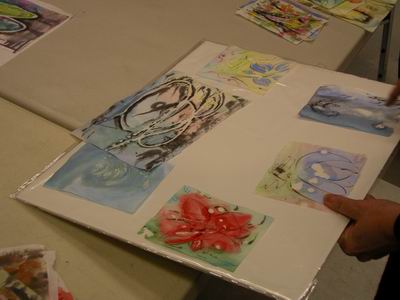 The bright, sunny colours of this artist created a warm and optimistic presentation. 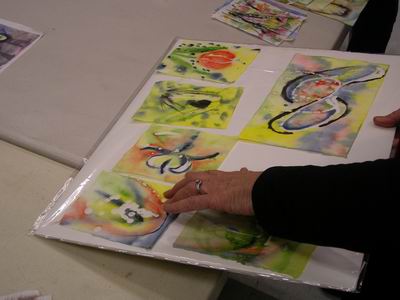