An exhibition of sumi-e paintings with lots of variety made for an exhibition with something for everyone. Titled, Sumi-e Shades of Ink, this expressive collection fascinated many observers. 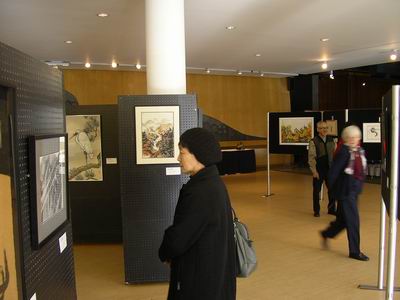 All types of visitors dropped by from those who have been coming to the sumi-e painting exhibiton for decades to teenagers. 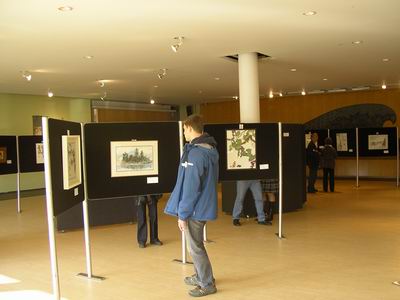 Each person had a personal way of interpreting the image before them. 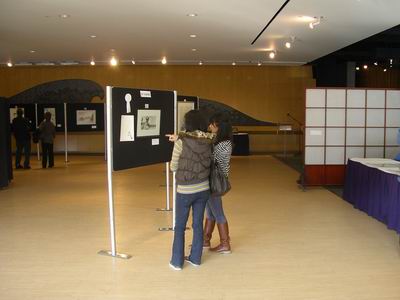 This work gives us the unexpected. What appears to be a small, seemingly abstract piece reveals a bigger painting. Certainly it is big because of its subject matter as indicated by the title and the magnitude of the mountain in the background. But further, it is grand in the feelings that it evokes: strength, chaos, movement and power. 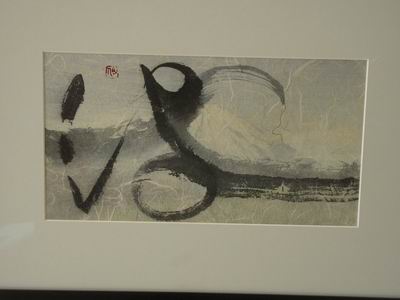 Diana Bullock's, The Patriarch, attracted many viewers because of the bird's striking individuality. Maura Broadhurst gave an honourable mention to this painting and had this comment.

The combination of deliberate, loose, subtle strokes allow the artist to convey immediately the environment of the scene - the smells, sounds and feel of the marsh. Most importantly, however, she also captures the attitude and personality of this strong leader. 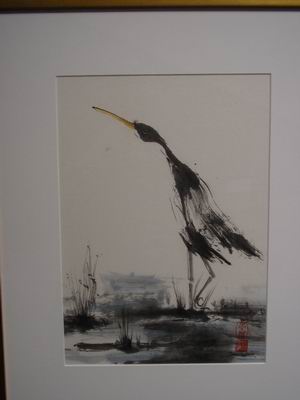 The composition, the accurate yet effortless use of form, the opposition of the black objects and the white space in this painting give the viewer a real focus on these fish. They are simple yet powerful. They occupy the space with sense of who they are. The viewer is involved in the interplay among the three as they wiggle out of the frame. 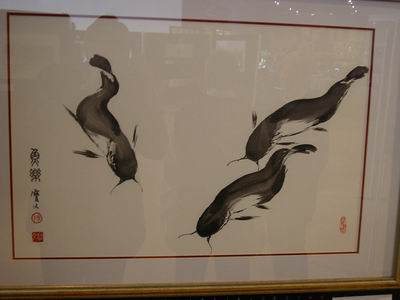 When We Dance We Are One by Roslyn Levin received an honourable mention. Maura made these observations about this work.

With such a fluid line and such minimal pigment, the artist captures the creatures, their dance and their intimacy. The brush work echoes the subject and results in a sense of calm yet also joy in the viewer. 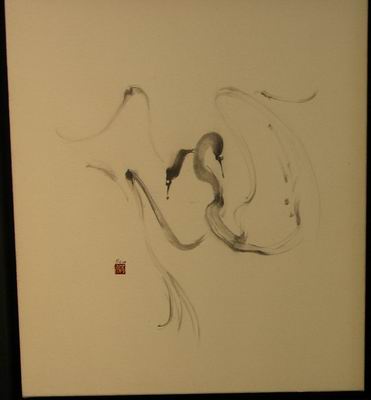 Hiroshi Yamamoto's Moon and Forest was another painting that received an honourable mention. Maura Broadhurst added this comment.

This landscape gives the viewer an unusual perspective looking down and out over the land. The scene is partly obscurred, partly revealed. The artist's use of the medium succeeds in transporting us to the location and in allowing us to feel the spirit of the place. 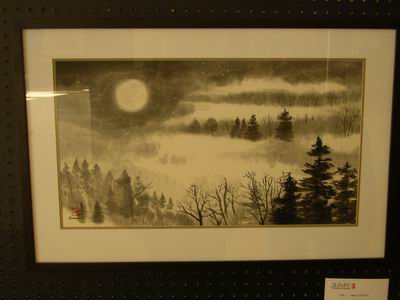 An honourable mention went to Baoxing Zhang's On the Journey. The comment for this painting by Maura stated the following.

This strong painting immediately conveys the drama of the landscape with its stark contrasts and sharp forms. Simultaneously, however, the artist reveals the strength of the quiet and the isolation. We feel the cold and hear the emptiness. 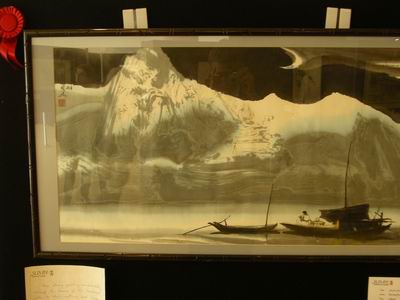 The viewers of many other paintings were left to interpret them for themselves. 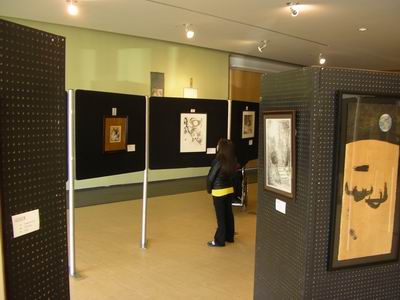 The paintings included the traditional subject of bamboo on a scroll. 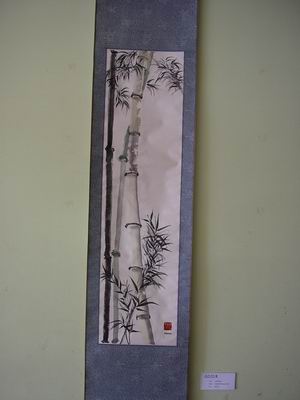 Also, there were amusing paintings. 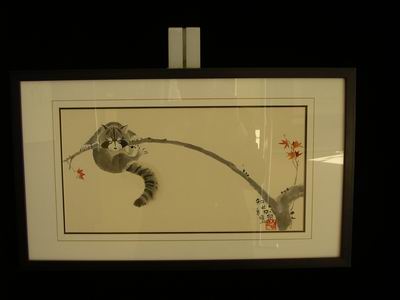 Demonstrations were performed throughout the exhibition. 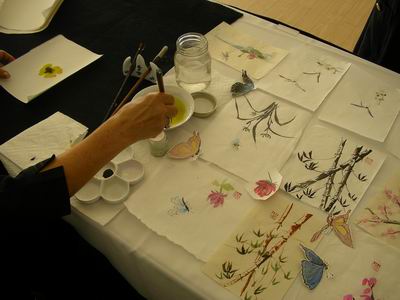 Barb Laplante showed how to create a delicate flower with a few brush strokes. 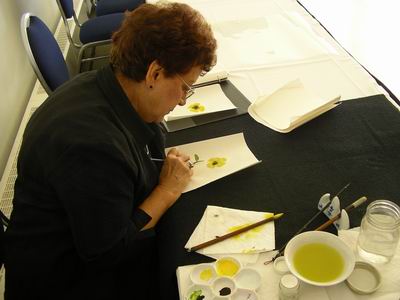 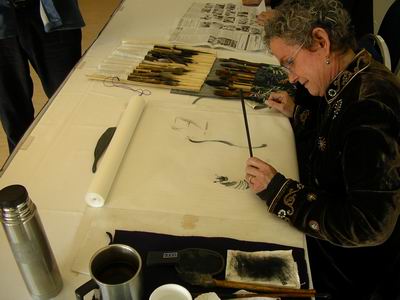 Diana Bullock painted one of her stylized birds. 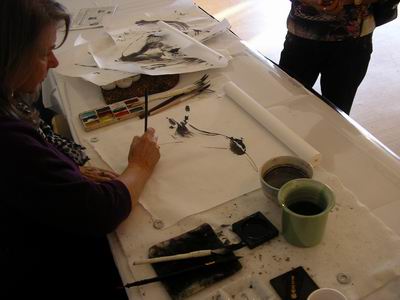 Then she added some colour and reeds to create the bird's environment. 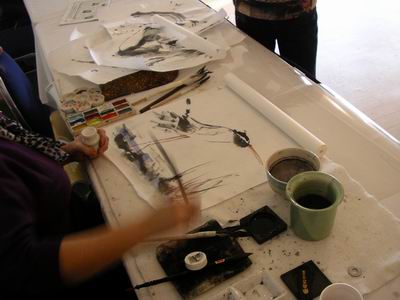 Other areas of the exhibition included a tea room with an ikebana. 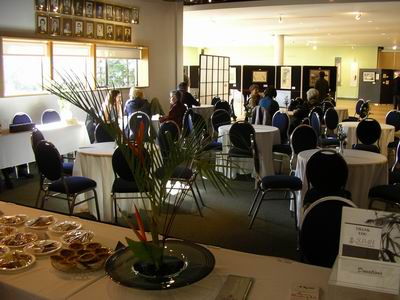 Jeffrey Snape was captured beside his award-winning painting. 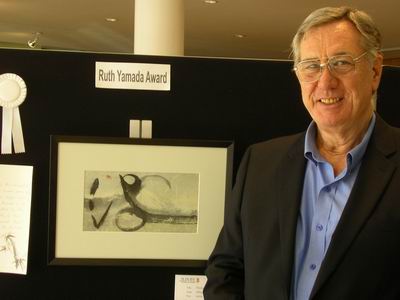 The stars of this show, as usual, were the paintings themselves. 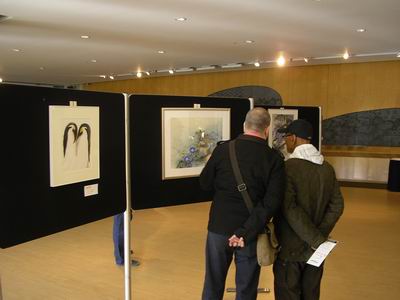 Some visitors saw a contemplative aspect in a work. 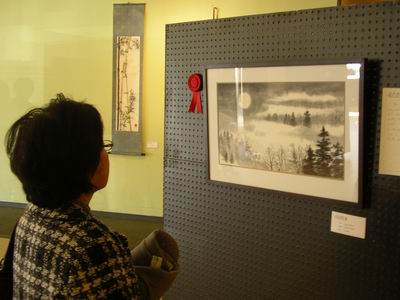 Other viewers discussed the meaning of it. 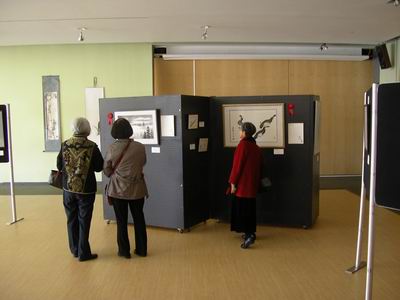 Each painting had something to say to someone. 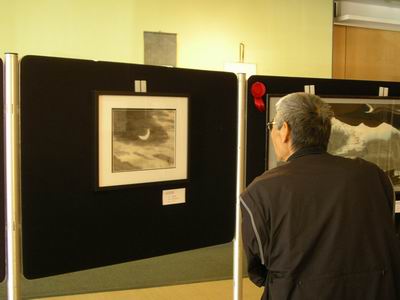 The comments by Maura Broadhurst were also read by those looking for another person's thoughts on a work of art. 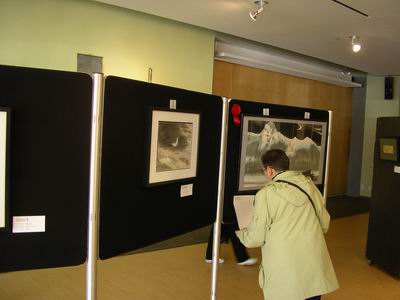 There were many, many paintings at this exhibition and each one left onlookers with smiles and thoughts. 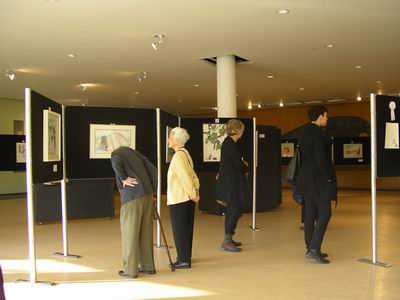 With all that inspiration, for the artists themselves it was time to return to our workshops and another year of learning and painting.