Dragonflies are found on many paintings, especially paintings with flowers. These entertaining insects that can fly forward, backward or hover seem to have captured the interest of artists over centuries. Roslyn Levin began her workshop on dragonflies by suggesting to start with the wings. 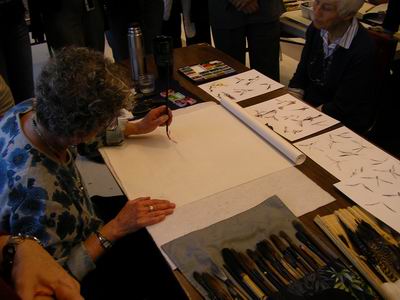 Begin with the tip of the brush and then press the brush for the wide part of the wing. Release the pressure and continue to create the wing in a single stroke. 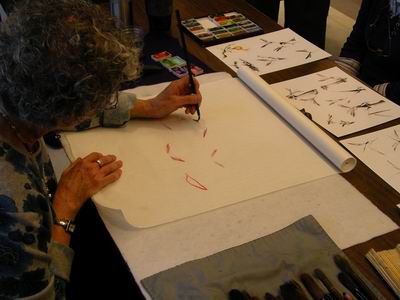 You have to be able to create a wing from the right and the left side. Dragonflies, Roslyn Levin explained, have four wings. 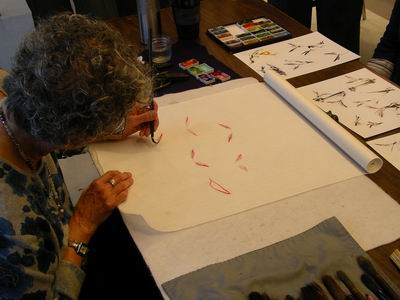 Roslyn then added the body. It's done in a single stroke using pressure to create the bulges in the body. 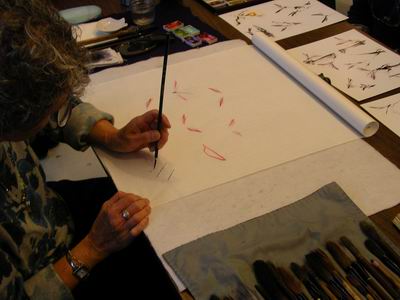 Returning to her earlier wings, Roslyn added the bodies to the wings. The eyes, two large blobs, were added last. 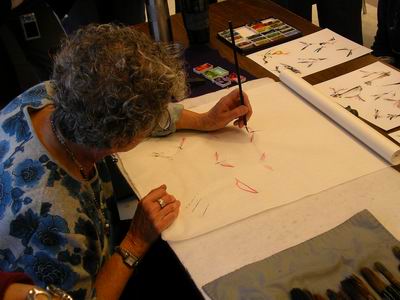 Some pictures provided input for more dragonflies. This wing let Roslyn experiment with loading several colours on her brush. 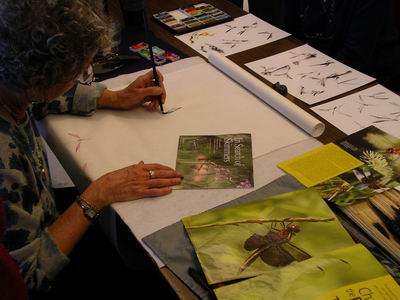 A second wing was added with the same colour scheme. 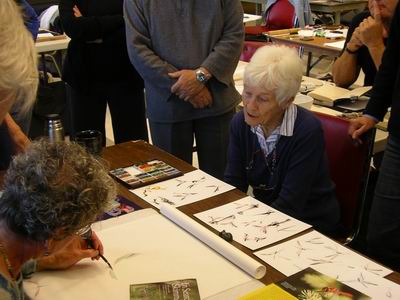 Roslyn added the body and completed the composition with a flower which is a natural way to complete a painting with a dragonfly. 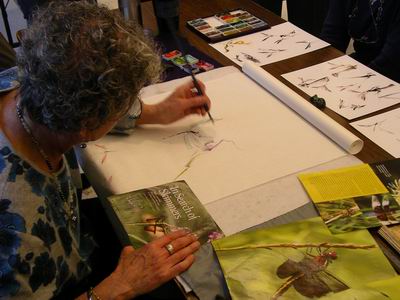 A closer look shows how to develop a painting using a stylish version of the dragonfly and flower. 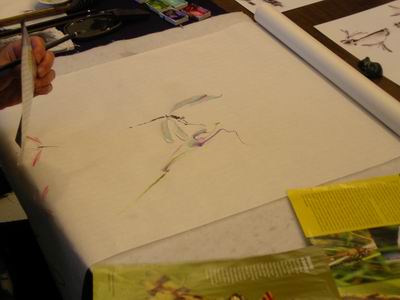 Roslyn continued with several more dragonflies based on pictures from a nature magazine. 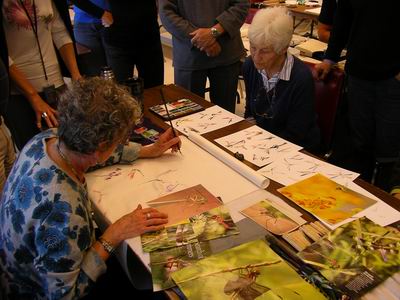 The result was an expressive collection of dragonflies and flowers. 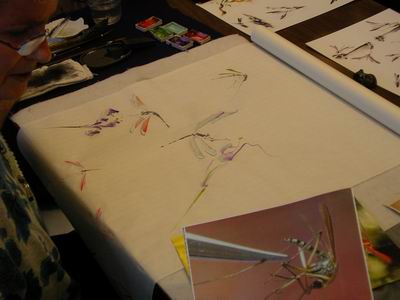 Pears are another area of interest for Roslyn and Roslyn this time showed how to start a painting with a branch and pear and complement it with a dragonfly. 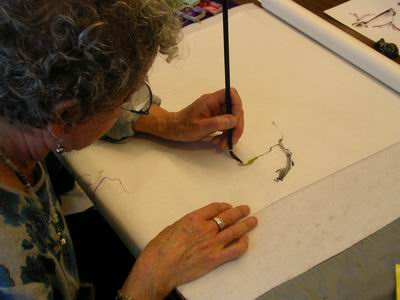 Once the pear was created the wings were started. 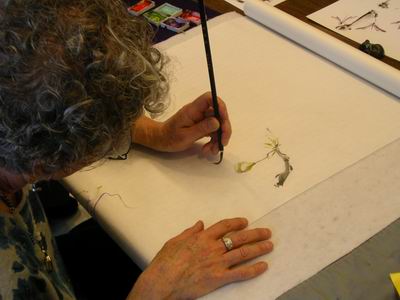 The dragonfly was completed and then Roslyn showed another variation that started with a branch. 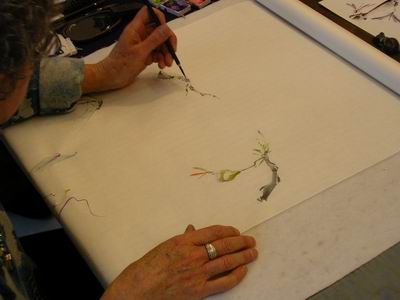 The second variation had the dragonfly landing on the branch which is when you can add legs too. 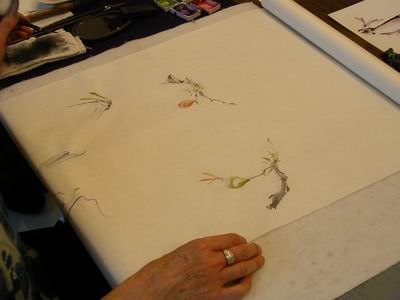 Roslyn helped the workshop participants as we returned to our tables to try out own dragonflies. 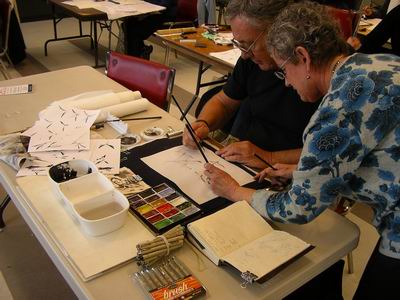 These seemingly simple insects are harder to create than it first appears. Dragonflies also have symbolic meaning in some cultures. In the Orient, they are associated with courage. In North America, native people have associated them with renewal and resurrection. The Irish have claimed they are the horses of fairies! 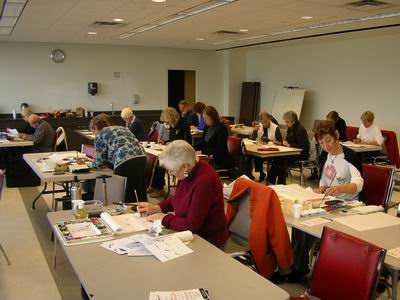 Roslyn patiently helped each one of us. 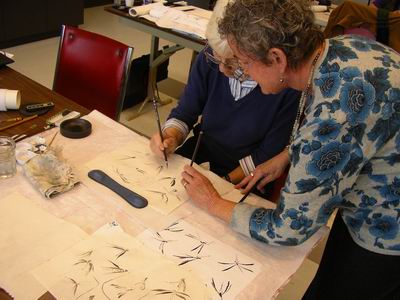 Mounting paintings is also something Roslyn has done many times. And it has led her to create a new technique. It begins with Yes!, a glue sold in art stores. 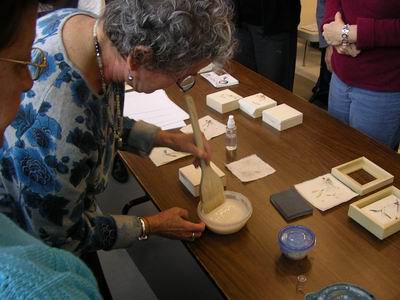 Yes! is applied to the wooden frame where the painting will be mounted. 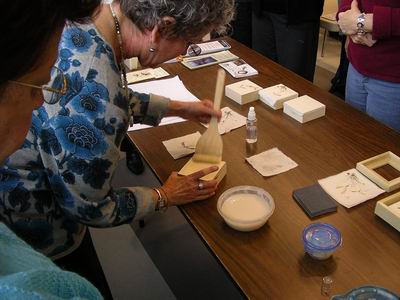 The first layer of rice paper is placed over the glue and it is left to dry. 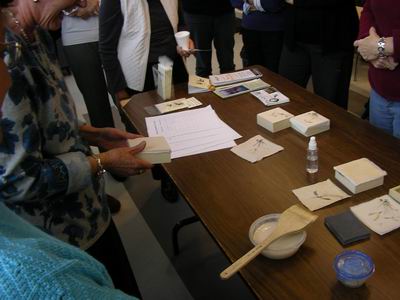 Once completely dry, glue is applied to the rice paper. 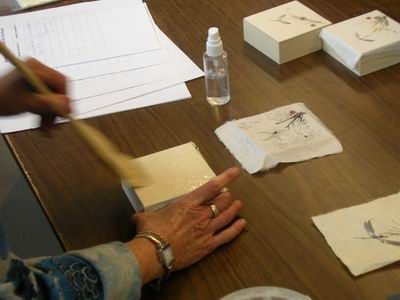 The painting is mounted and then left to dry. 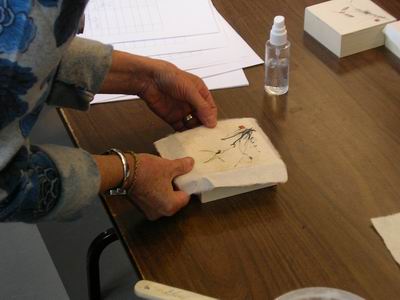 Sandpaper can then trim the edges. 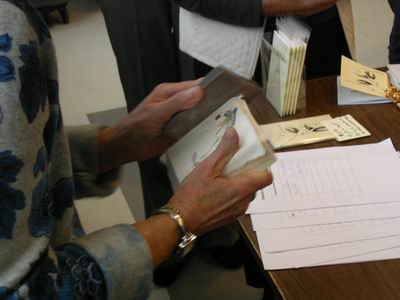 The result is wrinkle-free, professionally mounted work of art ready to sell. This photo shows several paintings in the stages of the mounting technique. 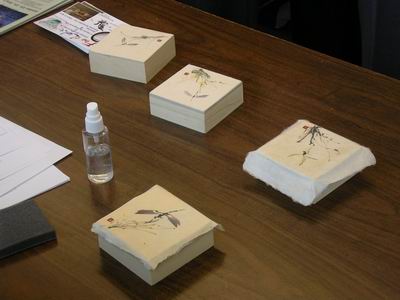