The dragon is a mythical creature revered in Oriental culture. This year is the Year of the Dragon in the Chinese zodiac. Moira Mudie began her workshop by telling workshop participants that there are different types of dragons and this year is the year of the water dragon. The clouds and the sea became the starting point of the painting. Moira used clear water to outline clouds. 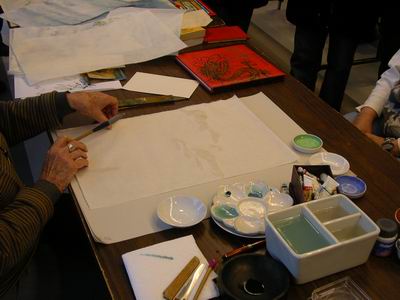 Adding blue paint to the edge of the clear water made the clouds form on the paper. 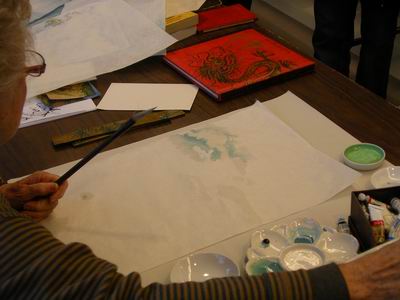 Moira Mudie continued to add blue paint to the edge of the clear water added earlier where she wanted to see clouds. The paint was added with a large, soft brush that was almost flat on the paper. 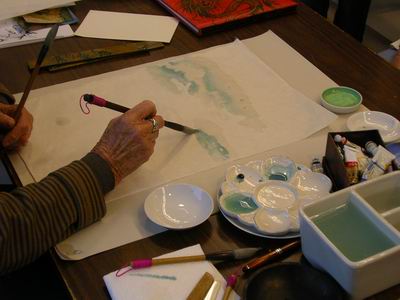 The result was a series of clouds similar to clouds you would see in the sky. 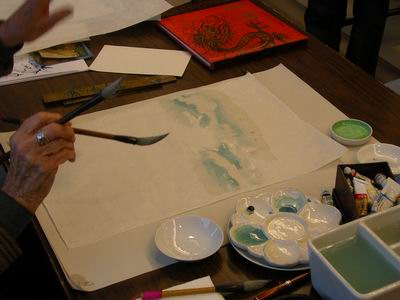 The sea where the dragon would come from was next. Moira used a similar technique to the clouds, starting with clear water for the sea. 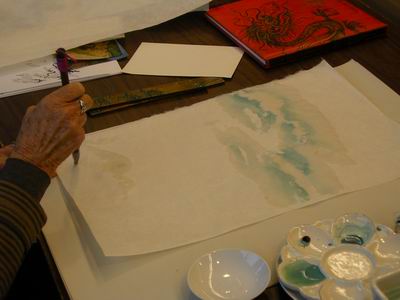 Then green-blue paint was added at the edge of the clear water. 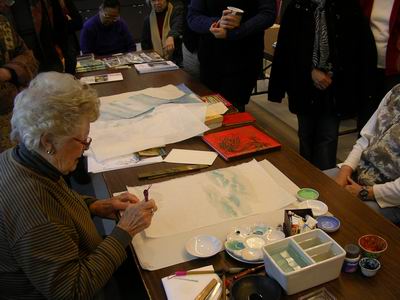 The curves of paint looked like the waves you would find at sea. 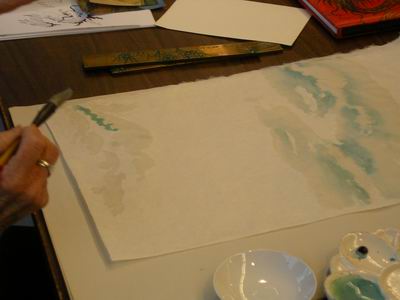 Moira continued to add more green-blue paint to develop the image of the sea including adding some small circles on the dry paper for froth. 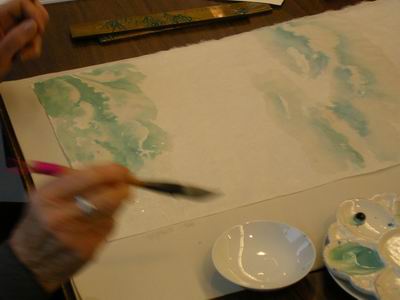 Then it was our turn to create a similar sky and sea. It was helped by cakes and tea from Linda Nakatsu. 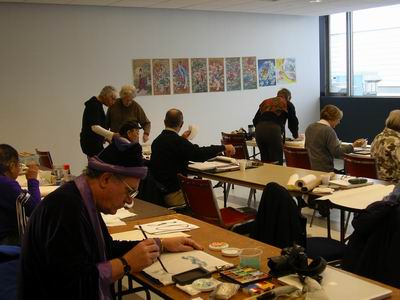 Moira had brought one of her paintings of a water dragon for display. 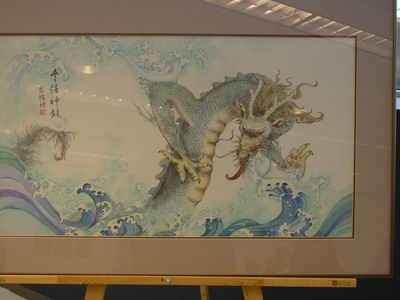 Moira had also brought some stylized paintings of dragons too. Because the dragon is a mythic creature, the dragon has been the subject of many interpretations. 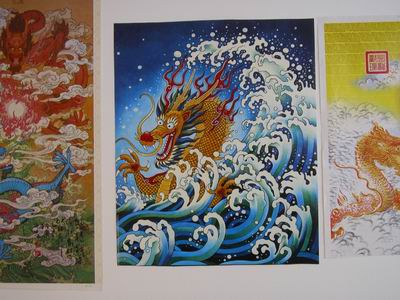 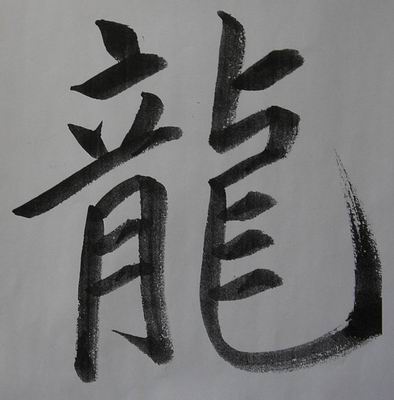 With the clouds and sea in place, Moira turned to the dragon. Though the dragon is not a real animal that has not prevented people from describing the elements of a dragon. In a handout, workshop participants discovered that a dragon should have a head like a camel, eyes like a rabbit, ears of a cow, horns of a deer, neck of a snake, belly of a frog, feet of a tiger, claws of an eagle and skin of a fish. 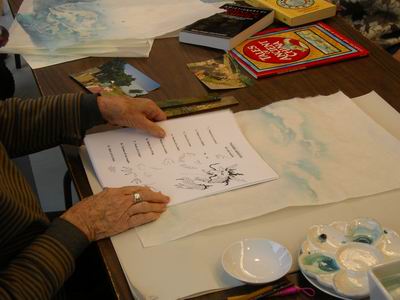 How do you fit this imaginary creature into your painting? Moira Mudie suggested that using a template as a pattern can help. 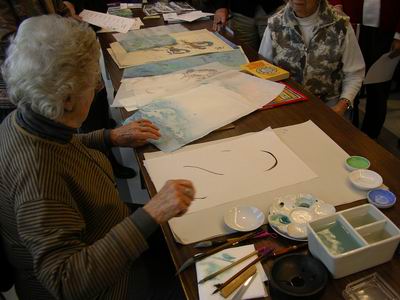 Putting the template behind the painting meant that an outline of the dragon could be used. 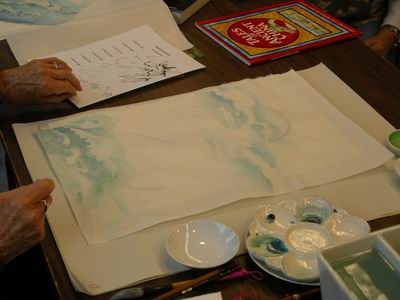 Moira started with a head that appeared just below the clouds. 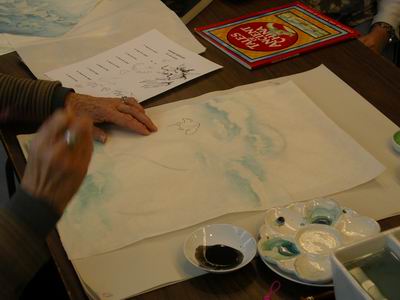 Antlers, one of which went behind the clouds, was added next. 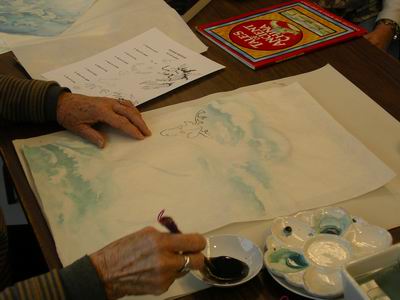 Spikes were added to the back of the dragon, which rose in a semi-circle above the clouds. 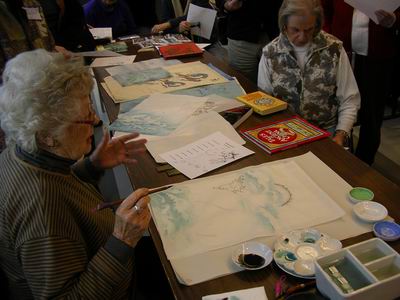 Moira then turned to the body of the dragon, adding legs. 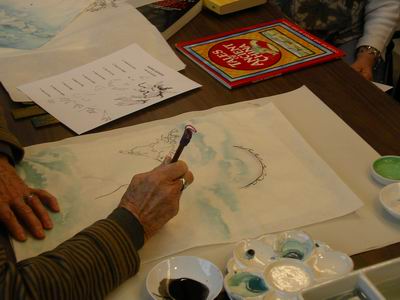 How many legs does a dragon have? Sometimes two, sometimes four. 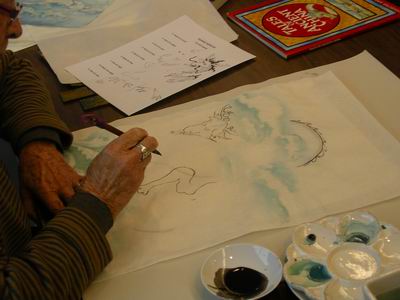 Claws, a tail and scales developed the image of the dragon. 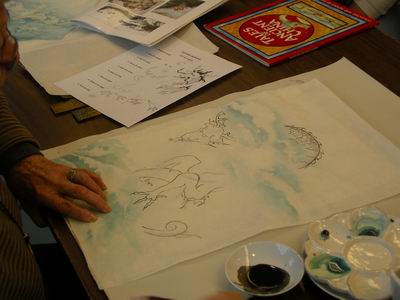 Whiskers were another detail for the dragon. Moira Mudie used gray for shading to give a three-dimensional effect. 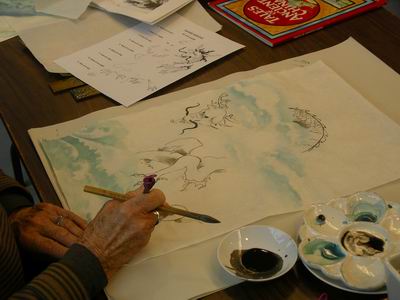 The completed dragon had a writhing, reptilian nature. 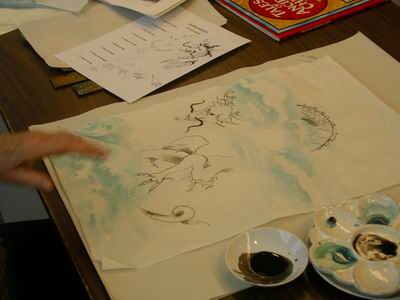 We posted our dragons on a wall for review. 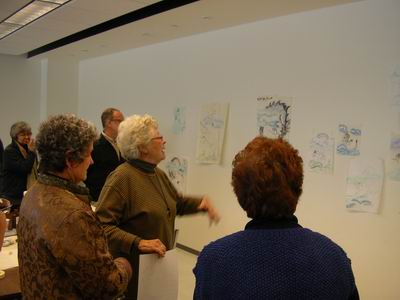 The subject, we concluded, led to a great deal of creativity. 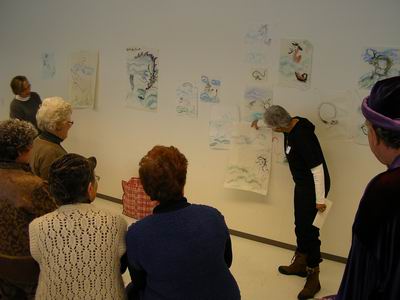 One surprising effect was that we found many of these expressive dragons humorous or maybe it was simply fun to paint this imaginary creature. 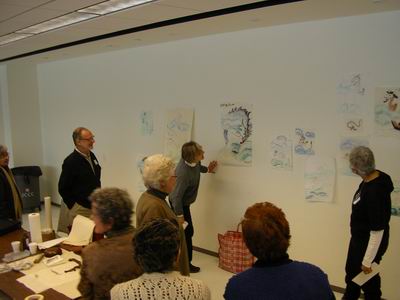