Life like brush strokes are easy to see in a painting but difficult for most painters to achieve themselves. Charles Leung helped us resolve this challenge by getting us to focus on developing our brush strokes with a variety of techniques. Charles began by recommending calligraphy as a way to better our brush strokes. 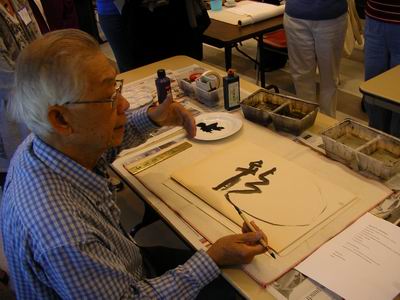 The calligraphy for dragon, for example, uses many of the same strokes that would be used in a painting. Like sumi-e painting, calligraphy uses expressive brush strokes to convey meaning. 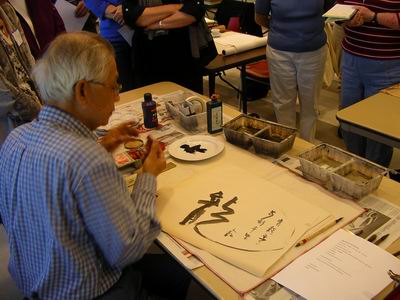 The tiger was another word that Charles Leung painted. Charles told us that calligraphy actually preceded painting in ancient China. 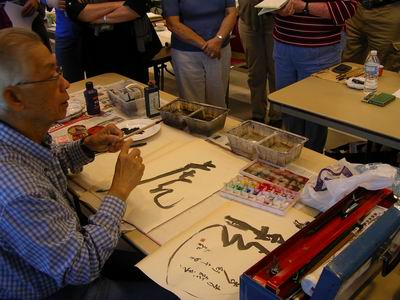 As in painting, you can offset some calligraphy with another item. Charles added a lady bug to the top of the word for tiger. 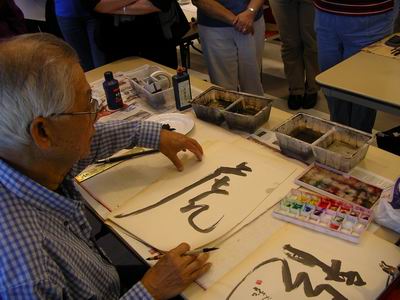 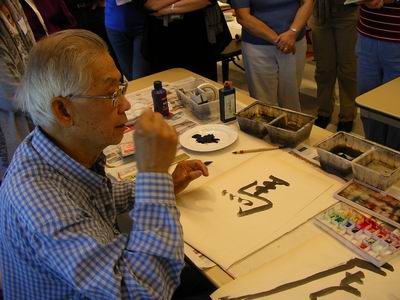 He then turned to painting a crab. Three brush strokes with the edge of a flat brush created the body. 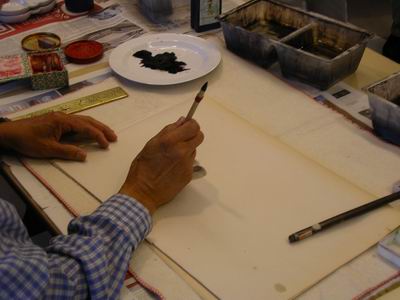 Four more strokes to each side of the crab created the first parts of the legs. 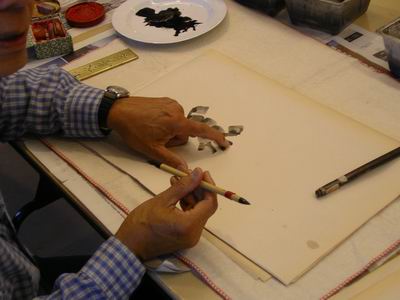 Quick brush strokes like the type of stroke you would use for a branch in a tree completed the legs. 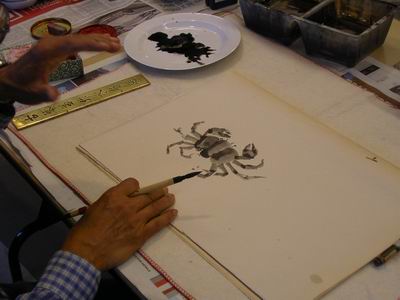 Charles Leung reminded the workshop participants that you can always fix up a few things later. In this case adding some definition to the shell of the crab and legs with small, fine lines in black ink. 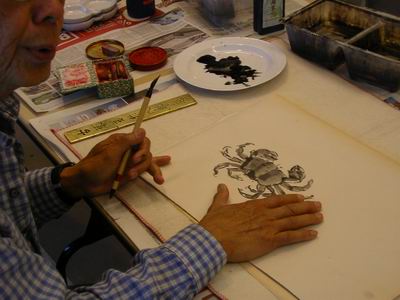 Some colour was applied and some seaweed was painted about the crab to complete painting. One way to paint the crab freely, Charles suggested, is to study and paint the crab in detail and then forget everything you know and paint it. 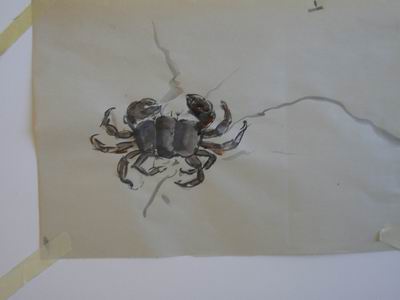 Charle's calligraphy and painting was posted on the wall. Left to right, the calligraphy was the tiger, the dragon and the horse. The crab was posted below them. 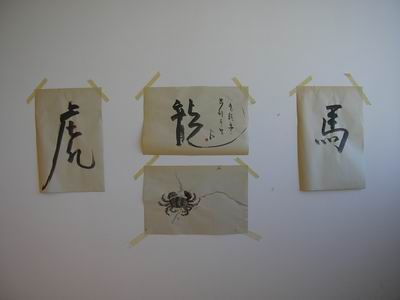 Charles Leung turned to the bamboo as another subject to use expressive brush strokes. Charles used the analogy of a family. The first bamboo stalks were like the parents of a family. 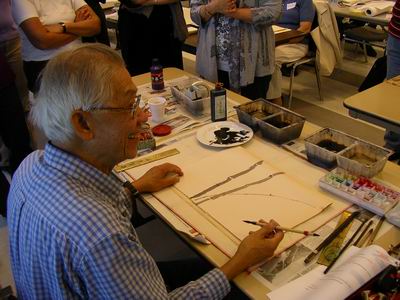 Then came children, who were more flexible, and grandparents who were more worn with age and brittle. The concept of thinking of a bamboo grove like a family came to Charles when he worked on a fundraising painting for McMaster University. 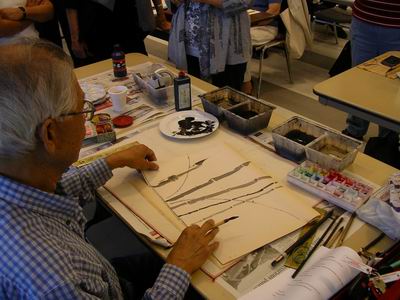 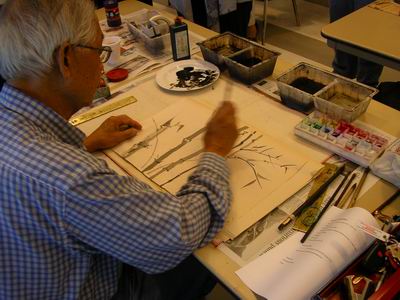 More leaves and branches including hanging leaves and branches from the top of the painting were added. Charles emphasized that we make the tiny stroke for the stem before the leaf was created, similar to the starting and finishing brush strokes for the calligraphy created earlier. 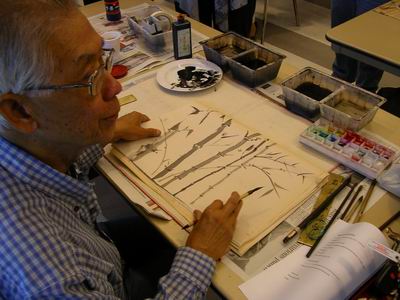 New shoots were added at the base of the painting. 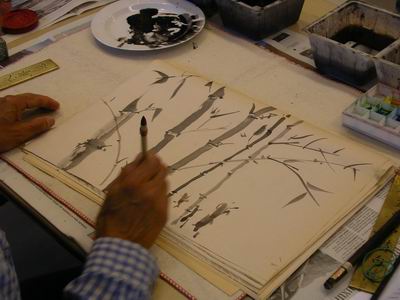 The complete work had every family member imaginable. Charles Leung left a corner free for the seal and some calligraphy. 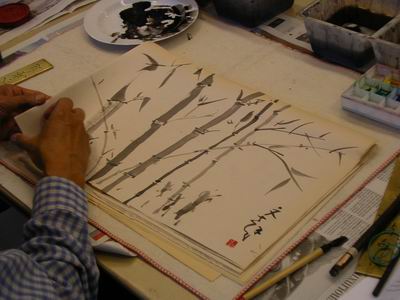 When you go to a workshop at least part of the time is painting what you learned. Along with Dianne's green tea and cakes, we created our own bamboo family and crabs. 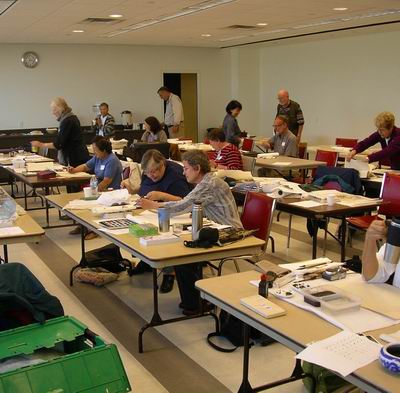 In another demonstration, Charles showed us how to use the spontaneous, emotional brush strokes to paint a Christmas cactus in literally five minutes. 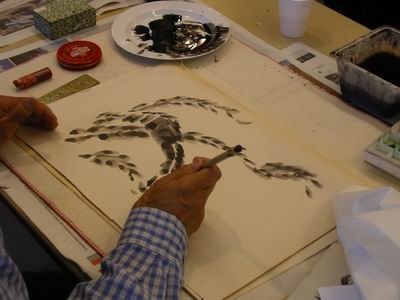 The direction of the branches came first, followed by the flowers. Not too many flowers, Charles said. 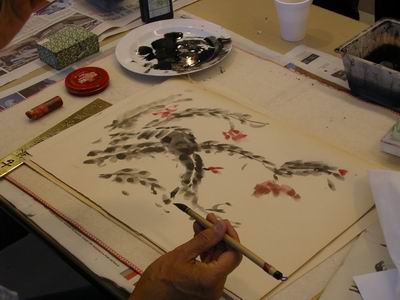 As the calligraphy for tiger was enhanced by a lady bug, Charles thought of enhancing this painting with an insect. 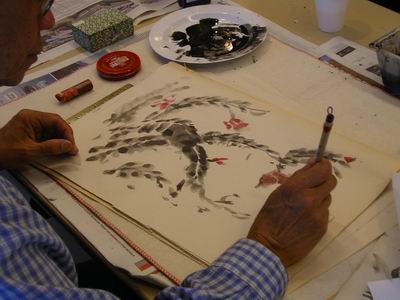 A butterfly was the result, which made the composition more interesting and lively. 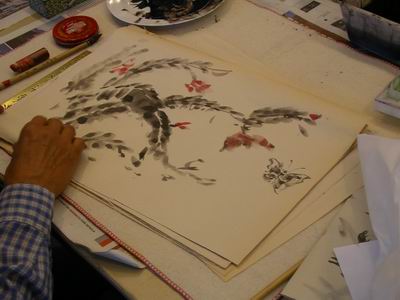 We gathered for a spontaneous group picture. 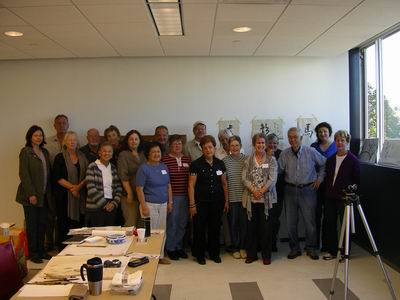 You can find more information about Charles Leung in the links section.