Understanding what makes a composition work in a painting is a key to developing expressive, eye catching paintings. Richard Tang showed us how to take two elements, a cicada and some leaves, and turn a painting into an intersection of the two for dramatic effect. Richard Tang began by reminding us to pause and meditate on the painting we were about to work on as we prepared our ink. 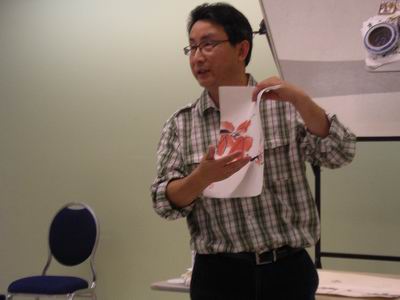 Richard prepared a number of paintings for us to see the relationship between the cicada and the leaves. 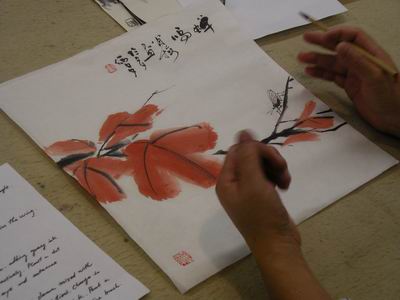 Beginning a painting is sometimes challenging. Richard Tang often starts with some structures on a painting where he has an idea of placing the subject. 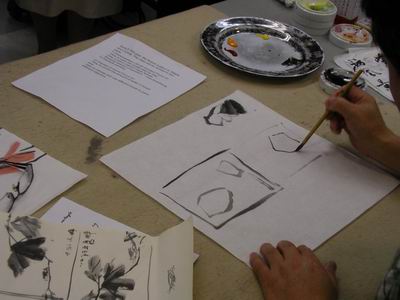 He also looks at items he has gathered like leaves to sketch some ideas. 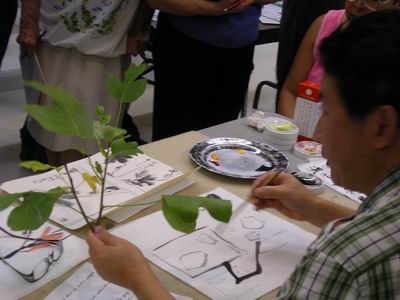 Richard brought some notes for the workshop participants that told us some basic steps in painting the cicada. 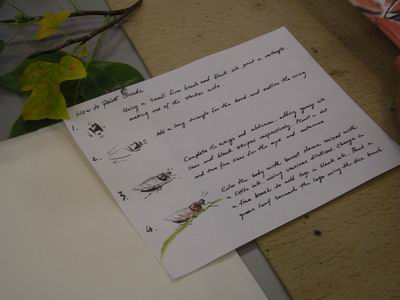 It begins with understanding the proportions and then creating the head, thorax and abdomen. The legs and antennae are added last. 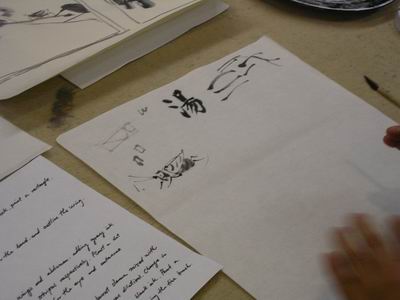 Richard Tang painted the cicada facing another other direction too. 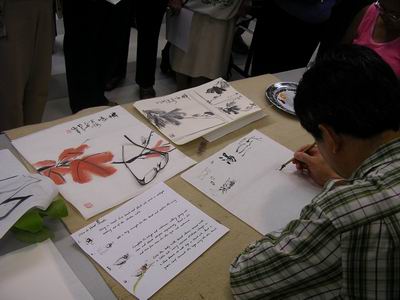 He painted the cicada in a similar proportional approach to the head, thorax, body, which was followed by the legs and antennae. 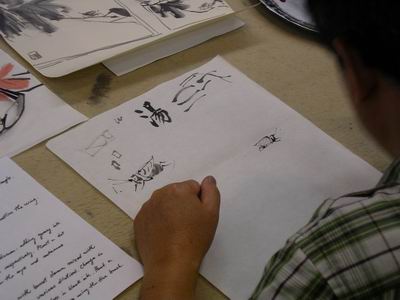 The colour was added last. It is a light brown. 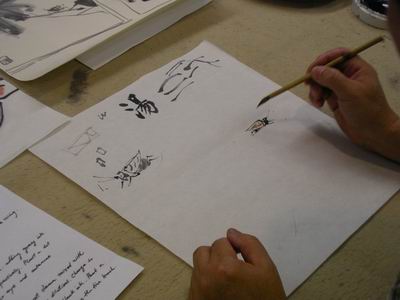 Richard Tang then turned to the leaves and branches which would occupy most of the painting. 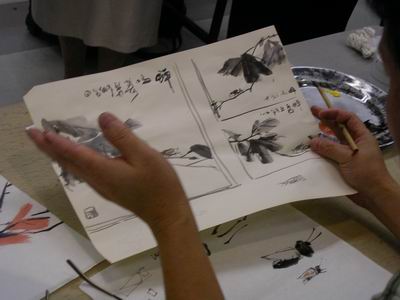 Although he advised getting an idea from them, Richard believed that you should paint your impression of them rather than an exact copy. 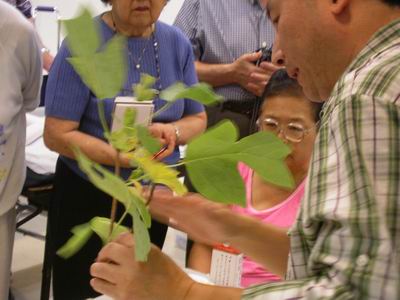 He painted several outlines of the leaves with a large brush. 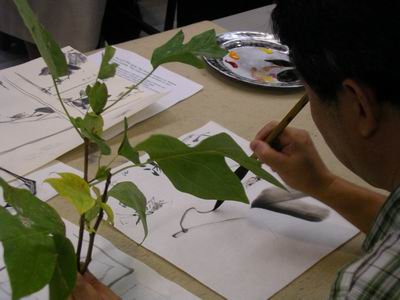 Richard displayed paintings at the workshop with leaves in both black ink and colour. 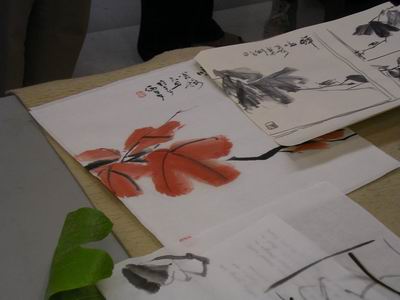 A mix of redish colours can be used for the leaves. 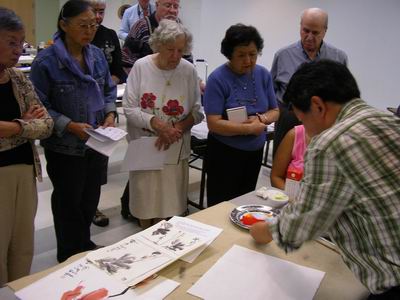 The leaves are painted in large, fast strokes. 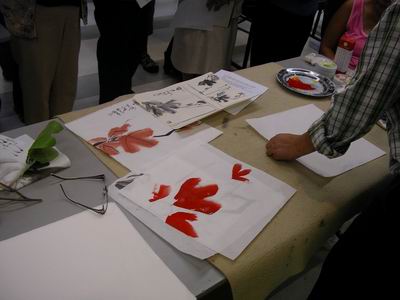 The branch is added in a few strokes occasionally stopping to give it a stiff, brittle effect. 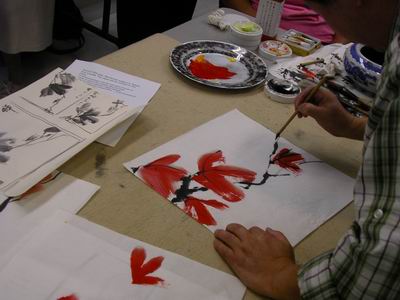 More branches and veins in the leaves can be added to bring out the tree structure. 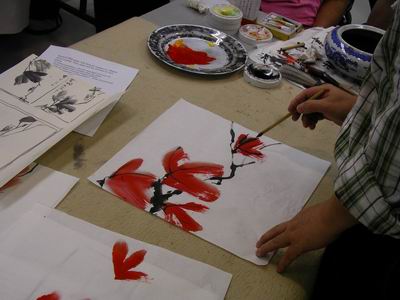 Richard worked on a second set of leaves to show a similar approach. 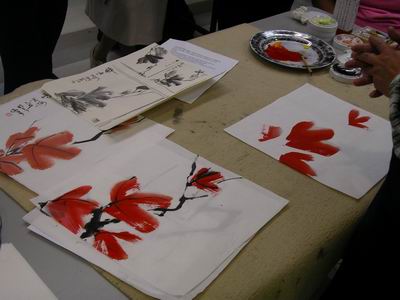 This image of leaves had a flowing branch added to it. 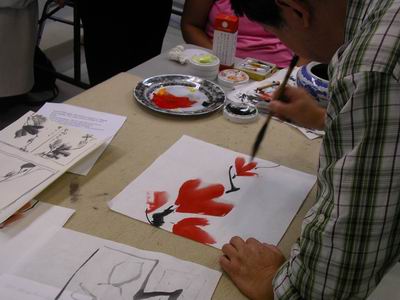 Richard Tang then added a thicker size to the branch. 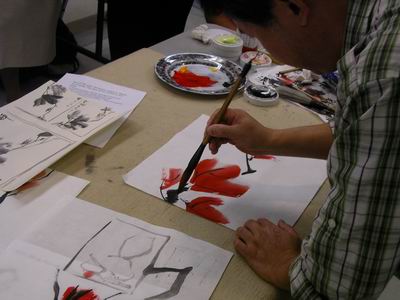 It was time for us to start painting cicadas and leaves but Richard showed us many examples that we could use to get started. 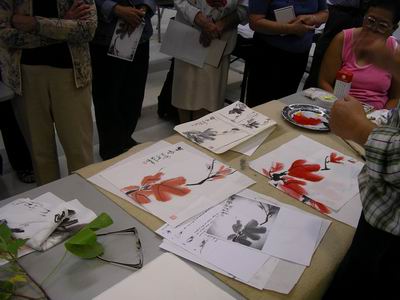 The completed work had black veins in the leaves. Richard Tang reminded us that the black ink over the red leaf would need to be added after the red paint dried. 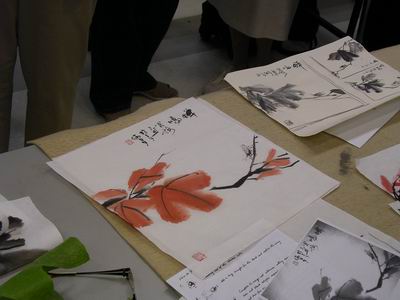 The workshop participants now had the chance to work on the cicada and leaves themselves and sip tea and have cake courtesy of Dianne and Linda. 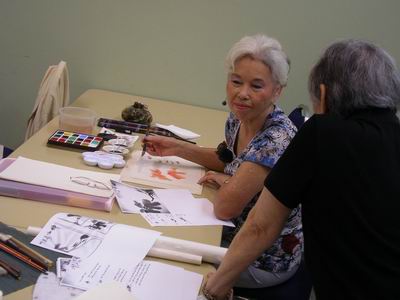 We seemed to be able to capture the essence of Richard Tang's teaching. 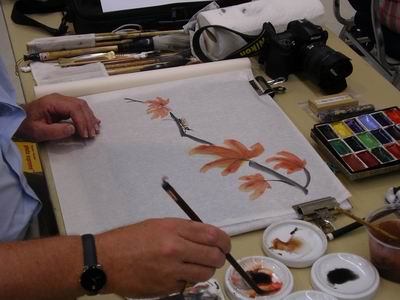 Richard also helped us out with our calligraphy. 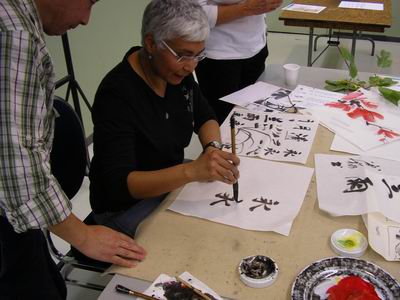 Like many painters, Richard believes that studying the brush strokes for calligraphy helps with sumi-e painting. 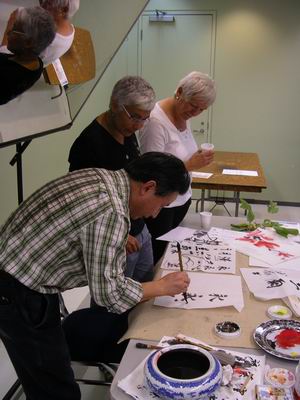 We headed off to paint more bugs and leaves with a new appreciation of both.