The Fluid Movement of Dancers with Roslyn Levin - April 9th, 2011

Movement in painting is almost a contradiction since we are expressing something in motion in a static art form. Yet dancing, for example, creates a dynamic image that catches the eye. Roslyn Levin began her workshop on painting figures in motion by showing us many examples of dancers we could study to understand how to paint figures in motion. 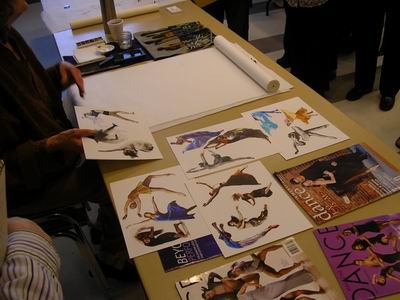 Roslyn picked a few to start with. Roslyn used the figures as a starting point as she seldom paints an exact match of something she has seen. 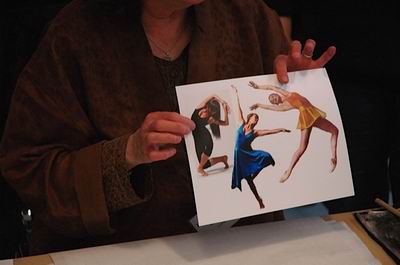 Where to start? Although there is not an exact point, Roslyn picked the outline of the figure as one way of getting started, often choosing the most striking part of that outline such as a raised arm. 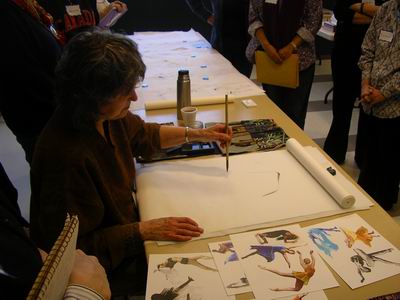 Another arm, head and hair followed. When motion is involved, hair falls in line with the motion of the person. 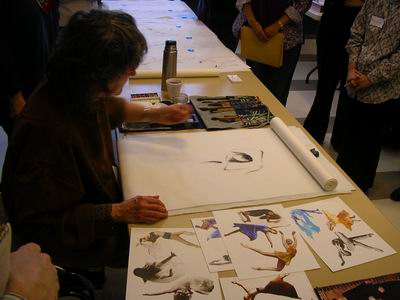 Roslyn added the outline of the legs to give an idea of the rest of the body. 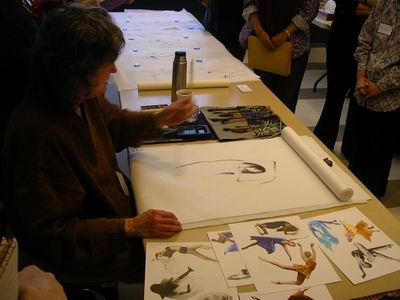 Another version of this dancer started with arms and body. 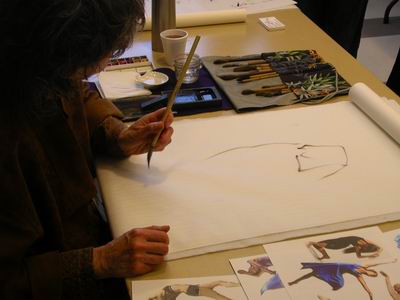 The hair, leg and foot developed the image further. 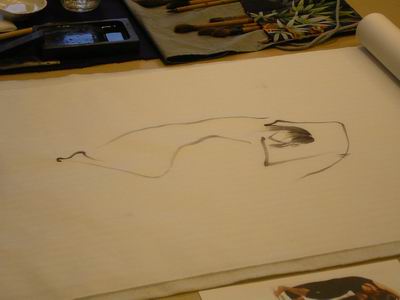 The clothes typically were added last by Roslyn. Which way the clothes fall depends on the motion of the dancer at a specific moment. 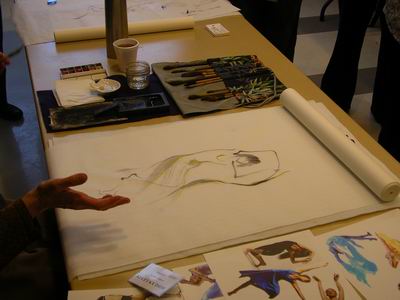 Understanding proportions in the human body is a key to painting figures. 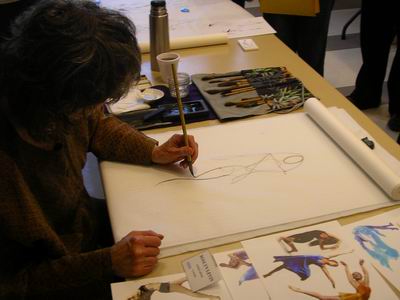 Rosyln Levin turned to another dancer in a classic ballet pose. 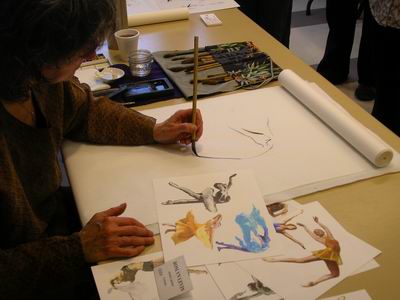 Pausing to talk to the workshop participants as she worked, Roslyn emphasized that getting a feel of the dancer in motion is what counted. 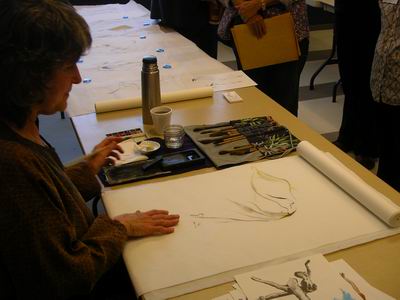 A few strong lines created the structure of the dancer including the face. The clothes followed behind in a dramatic way. 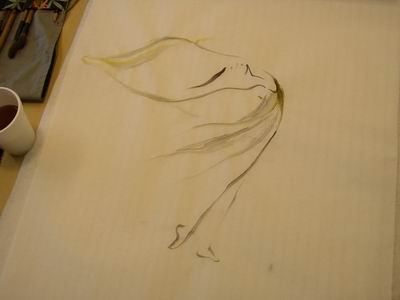 It was our turn to see if we could make lively figures too. 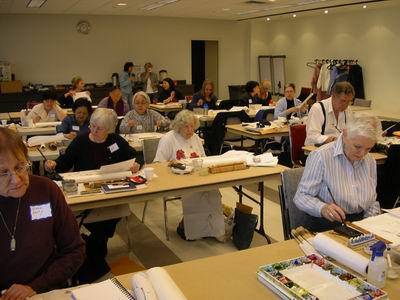 Roslyn had brought along examples to study. As in her demonstration, the concept was to capture a sense of motion rather than a precise figure. 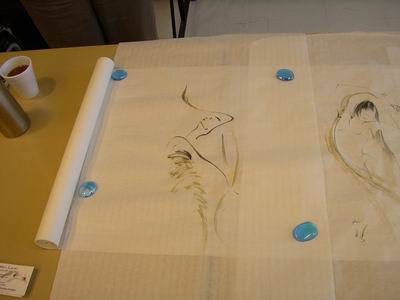 Roslyn also came around to help us develop the movement in our figures. 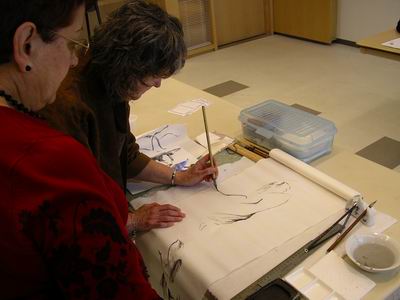 Roslyn returned to show the workshop participants more dancing figures. There are many magazines on dance and many figures can also be found on the Internet. 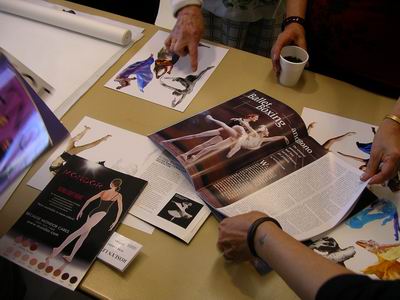 A figure in a pose seen at many ballets became the subject. 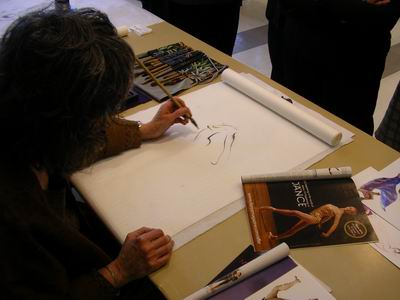 This figure focused on the arms and legs. It led to some entertaining discussions on the human anatomy. 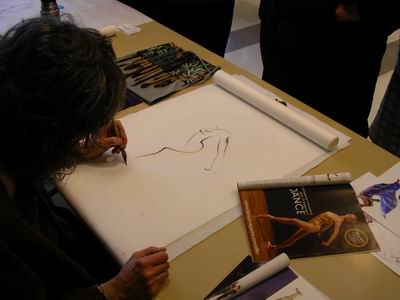 The clothes then fell back from the dancer as expected. 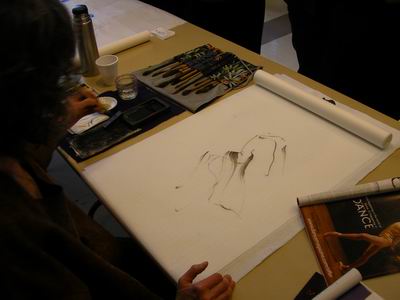 The next pose saw a dancer stretching upward. 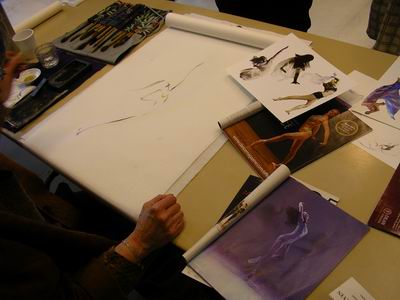 The front leg was added afterward. 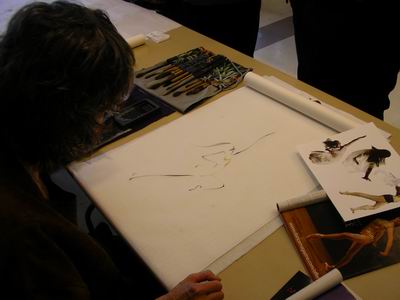 In another painting, Roslyn Levin focused on a twisting dancer. 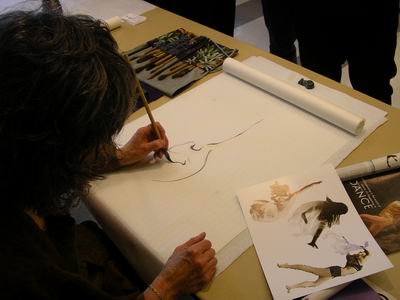 The lower body turned away yet the head looked upward to the arm and hand. In dance there are many possibilities and Roslyn encouraged the workshop participants to experiment. 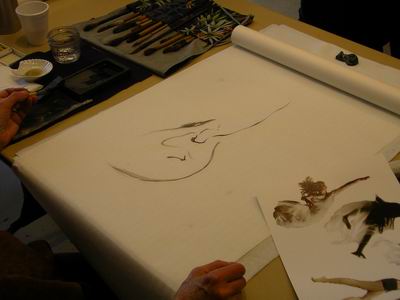 Roslyn left us with several examples of dancing figures. Each one emphasized the essence of the motion. 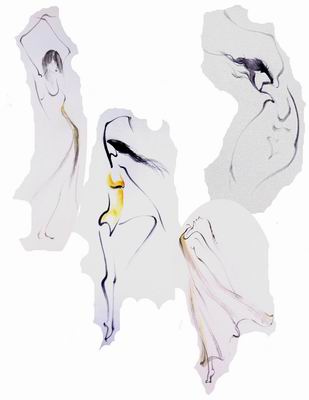