There are few animals more adored than the panda. Po-man Chan's workshop on the panda taught participants that it takes more than adoration, however, to paint them. One tip is to sketch the distinct markings of the panda first. 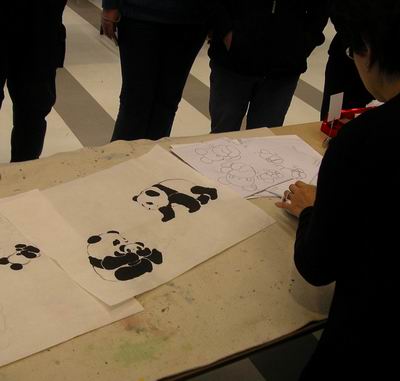 Po-man began by painting the ears with black ink. 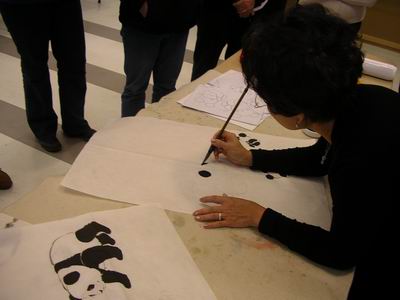 Painting the legs came next. 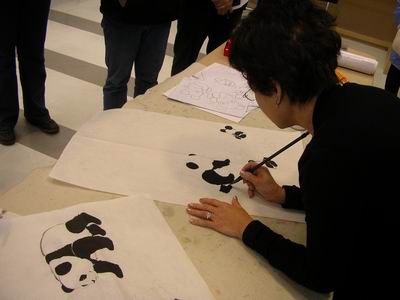 The black band on the back of the panda came next. Po-man reminded us that there needs to be a slight break between the leg and the black marking on the back. 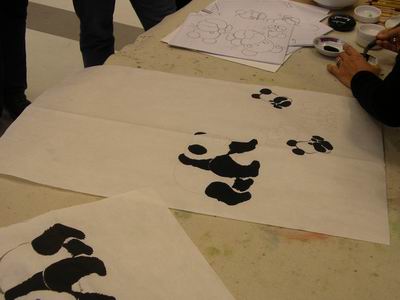 Adding the black about the eye was the final black marking on the panda. The eye itself is small. Po-man Chan added white paint later to make the eye of the panda more visible. 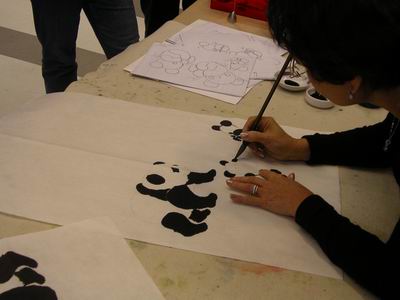 The painting also included cubs that are similar to a grown panda but simplified. They and have large heads relative to their small bodies. 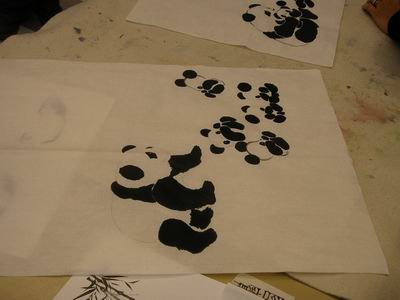 To define the white part of the panda, Po-man used a lighter shade of ink to outline the body. 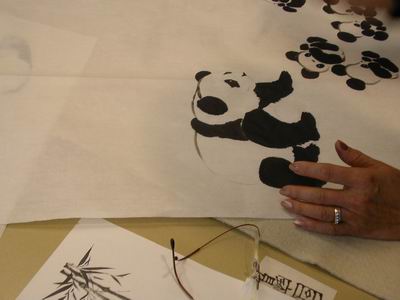 The outline of the white sections completed the painting of the family of pandas. 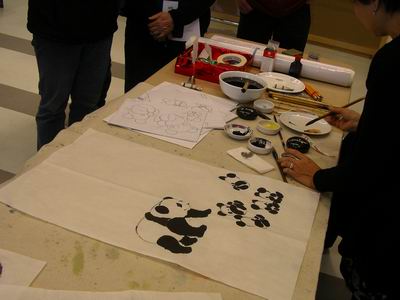 Po-man focused next on the background of the painting, starting with rocks using a burnt sienna (brown) colour. 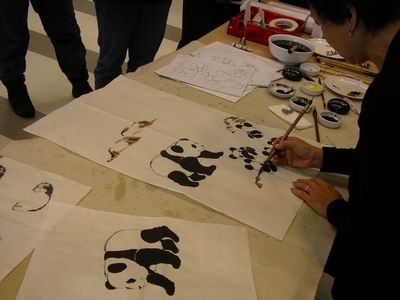 Bamboo, the favourite food of pandas, was added to the painting. Po-man advised the workshop participants to make the arrangement of the bamboo slightly chaotic and wild similar to real life. An indigo shade of paint was used. 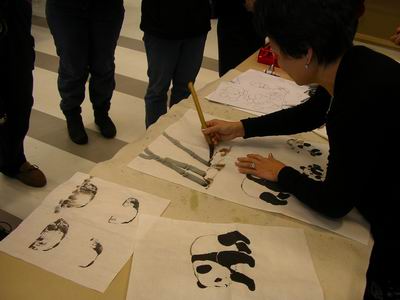 The ground about the pandas was painted next with a large brush that contained a mix of colours and black ink. 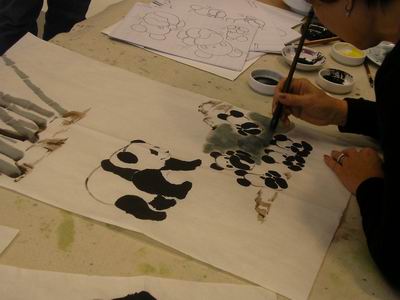 Po-man connected the ground from the pandas to the bamboo grove. She advised us to be careful that the spacing and size of the white sections in the painting was not too balanced. In summary, the white spaces needed to be varied. 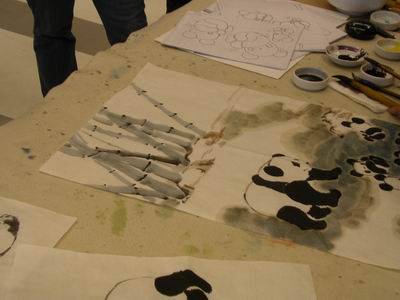 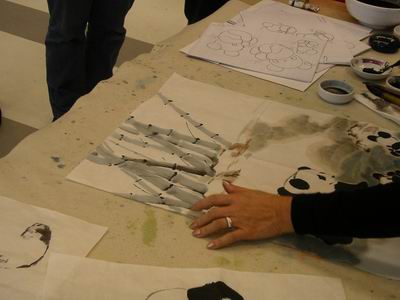 She then added bamboo leaves with a larger brush. 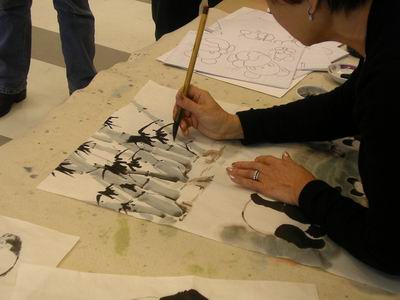 It was our turn to painting pandas. Po-man helped us with handouts that showed the structure and markings of the panda. We also had time for tea and cakes from Linda Nakatsu and Dianne Kitazaki. Paintings of pandas and peacocks by Po-man Chan inspired all participants of the workshop. 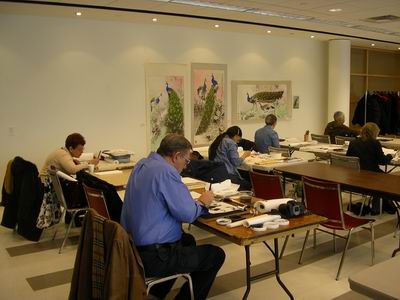 In the next part of the workshop, Po-man crunched up the painting she had created earlier. 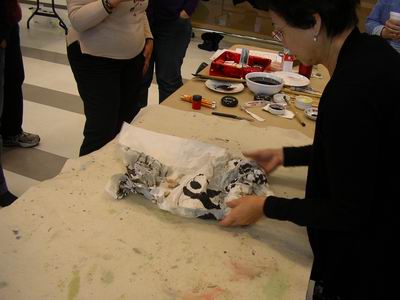 Unravelling the painting, she told us that the creases would create more natural enhancements to the painting. 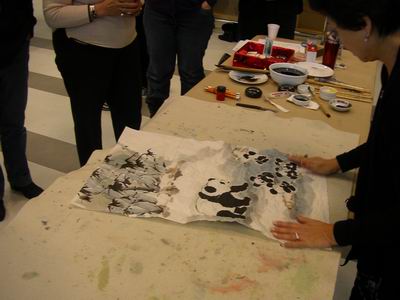 With black ink and a medium-sized brush, Po-man painted across the paper creases. 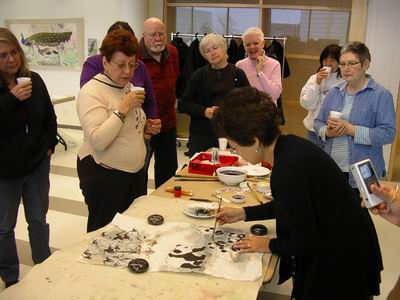 The effect gave a rough texture to the ground. 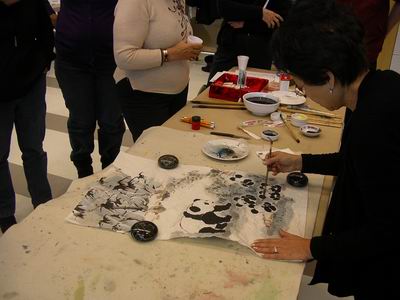 Some final strokes left a vivid and natural painting of a family of pandas. 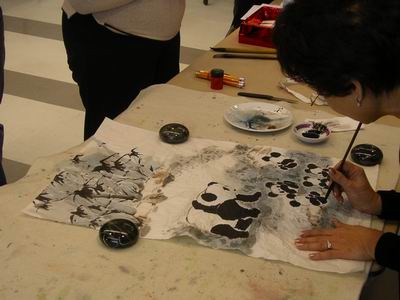 Po-man added calligraphy to her painting. 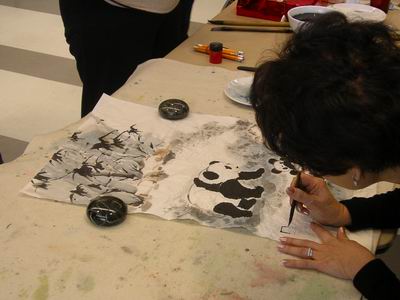 The calligraphy read that the panda was a national treasure. 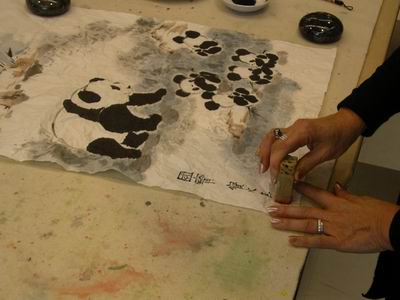 Po-man Chan added her own personal seal and another seal for the painting itself. 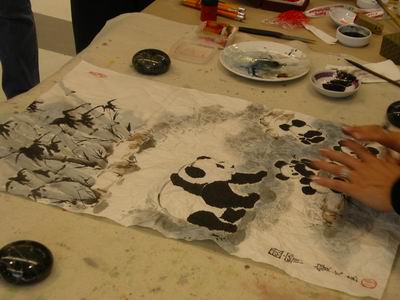 The workshop participants gathered for a group picture in front of a set of panda photos that Po-man and her family had kindly brought for us. 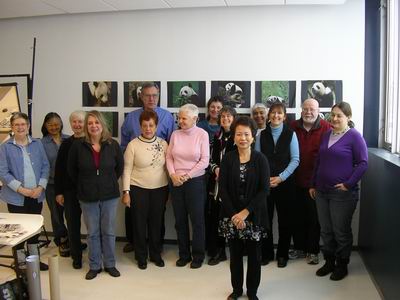 Po-man Chan provided us with her biography and information on pandas and this workshop.