Painting, mounting and enhancing the work with gold flakes created a challenging workshop for both our members and our instructor, Hiroshi Yamamoto. He began his workshop by reminding us to meditatively spend a few minutes grinding the ink. 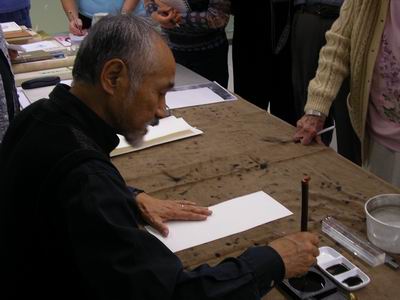 Hiroshi Yamamoto used the classic method of holding the brush with two fingers. 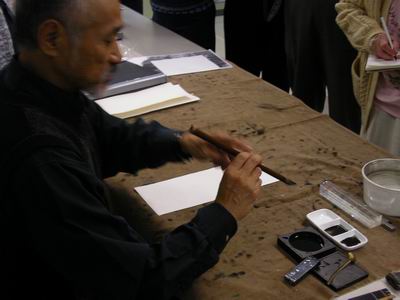 Although this workshop was about mounting and using gold flakes to enhance a painting, we needed a painting to begin with. 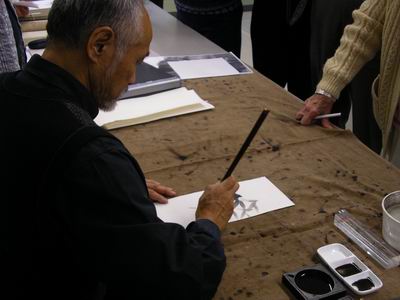 Hiroshi chose bamboo as his subject. At this point, workshop participants returned to their tables to paint bamboo too. We would let our paintings dry while we returned to see how to mount what we had created. 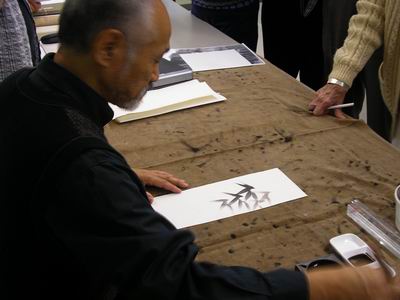 Hiroshi Yamamoto told us that we needed to use special paper for mounting paintings. At the end of this article, a link lists the Japanese names used by Hiroshi for paper, glue and flakes. 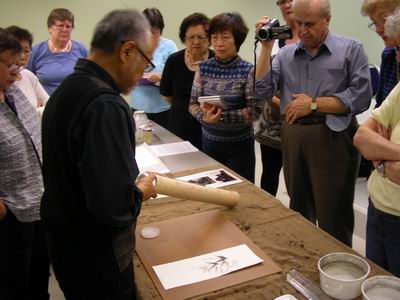 Although Hiroshi Yamamoto makes his own glue for mounting paintings, glue is available in art stores such as the glue in this green tube. 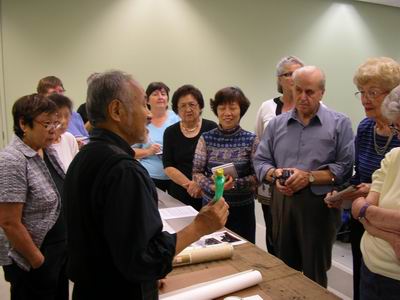 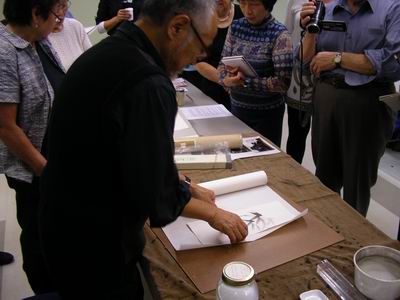 He applied the glue to the mounting paper with a wide brush. 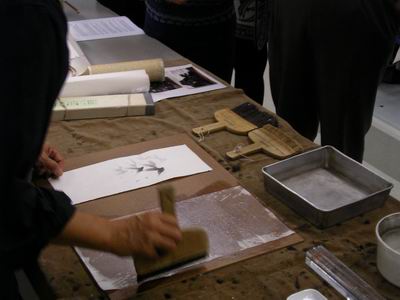 He wet the back of the painting itself. 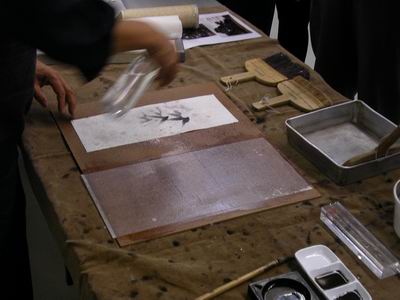 With another brush, he smoothed the wet painting. 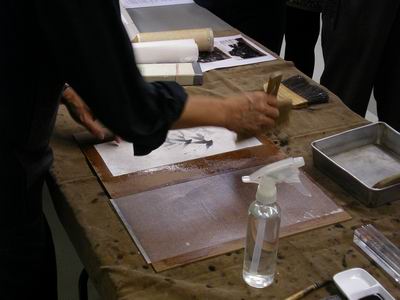 Then Hiroshi picked up the mounting paper carefully. 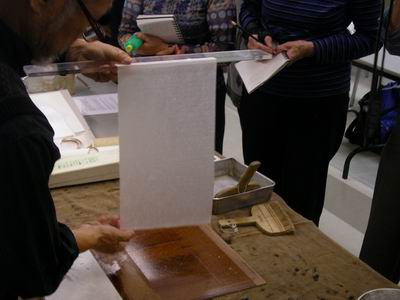 He placed it on top of the back of the painting. 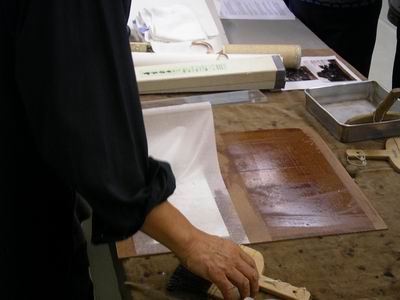 Then he smoothed the mounted painting with a brush again, starting at the center of the mounting paper and working outwards. 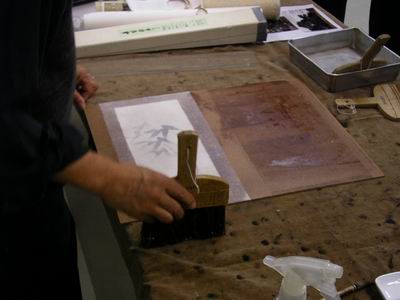 When placing the mounted painting on a board for drying, Hiroshi Yamamoto told us that is a good idea to add a piece of paper to a corner to help you pick up the painting later. 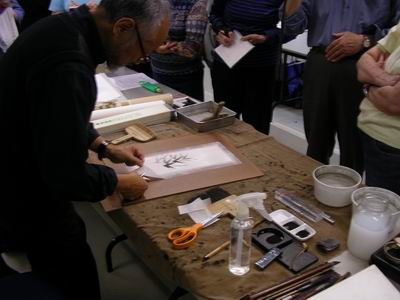 The painting was mounted and starting to dry, which meant it was our turn to try mounting our own bamboo paintings. 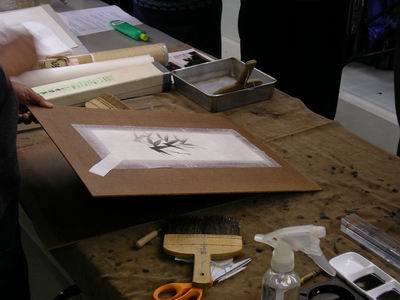 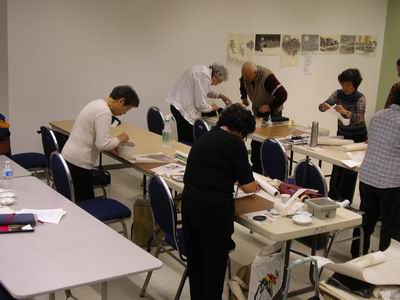 Smoothing that mounted painting had to be just perfect as demonstrated by Donalda McGeachy. 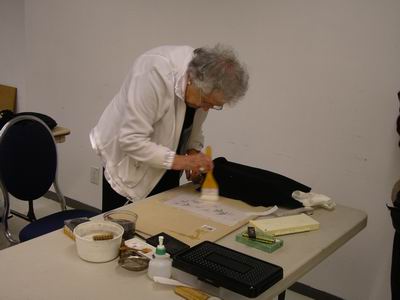 Hiroshi Yamamoto also helped us out personally when we needed some encouragement. 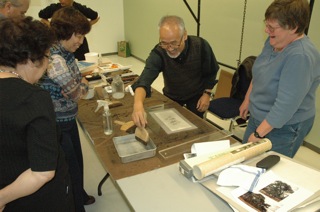 We also could study paintings that Hiroshi had brought to demonstrate the gold flake technique. The technique can be used for fall leaves. 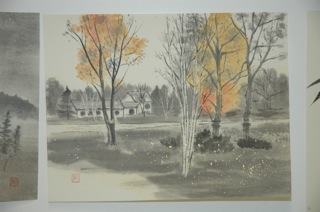 Silver flakes can be used for falling snow. 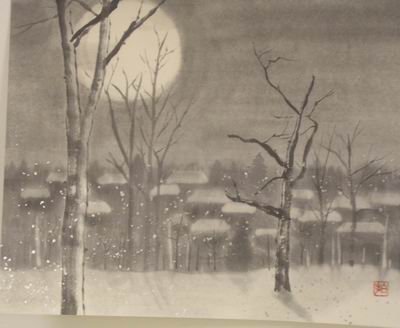 We returned to learn from Hiroshi about the gold flake technique, which first became an analysis of the types of gold flake paper to use. 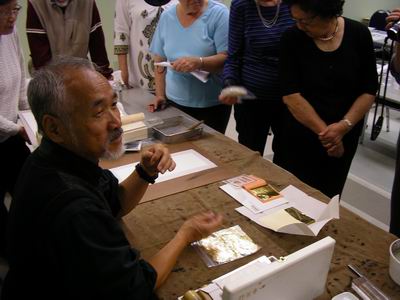 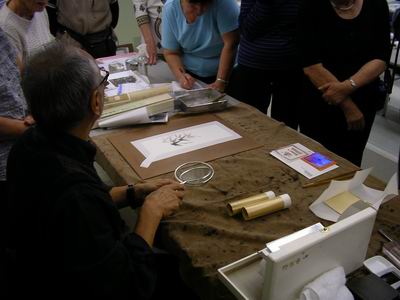 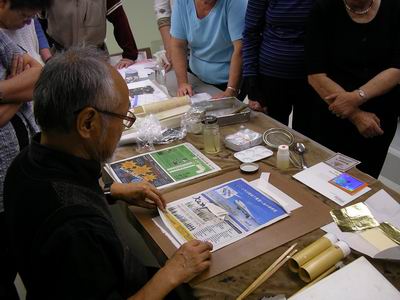 He squeezed the gold paper into the bamboo. 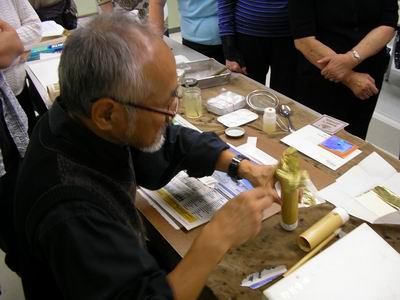 Hiroshi pushed the gold paper through the bamboo with a hard paper brush. 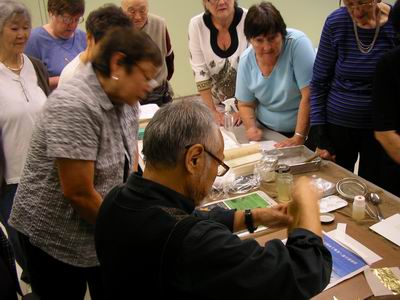 The gold flakes fell onto the painting. 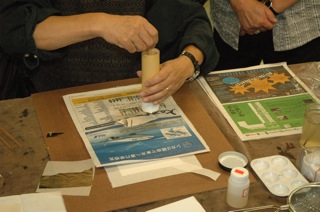 When finished, he smoothed the area with paper. 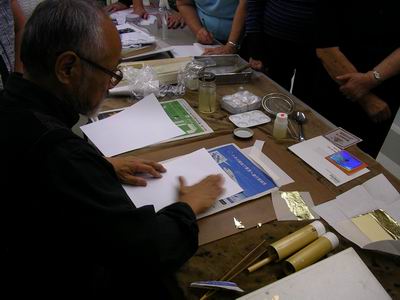 He demonstrated the same technique but with a tea strainer. 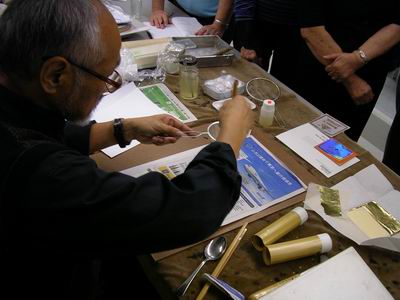 The result was a sparkling effect on the painting that visually enhanced it. 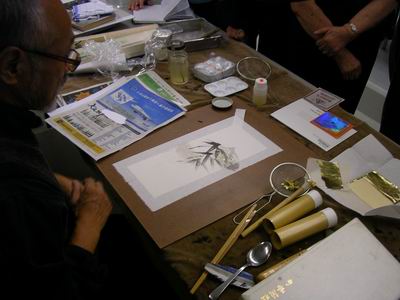 Hiroshi provided us with the proper Japanese names for the flakes, processes and glue he used. He also told us of his sumi-e ebooks.

You can find more information on Hiroshi Yamamoto in the links section.