We use ink in all our paintings and colour in most of them. Richard Tang began his workshop exploring the use of ink and colour by reminding us that the brush strokes we use with either ink or colour came from calligraphy. 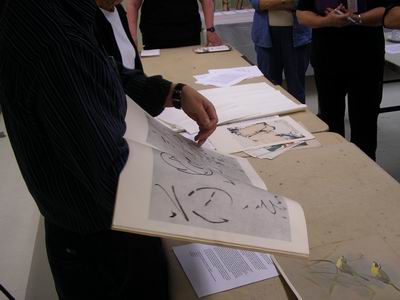 Brush strokes started the workshop. Richard compared the use of the brush to walking. As we walk, we have slight pauses and turns. Brush strokes too are often not a continuous stroke; there is a variety that gives us many effects. 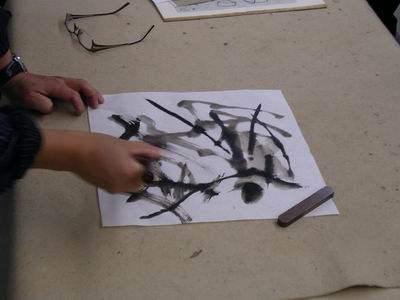 Richard Tang began a landscape with a single stroke that would become a tree trunk. 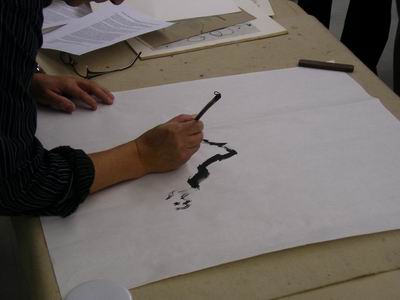 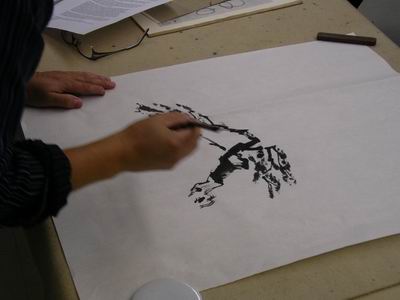 Richard worked quickly, standing and holding the brush in the classic upright fashion. 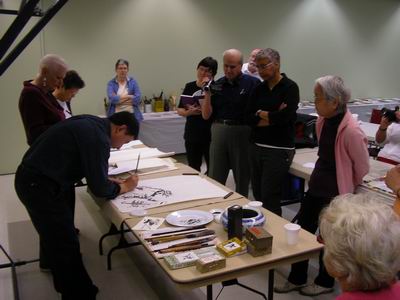 Beneath the tree, rocks were added, only presenting the outline of the edges. 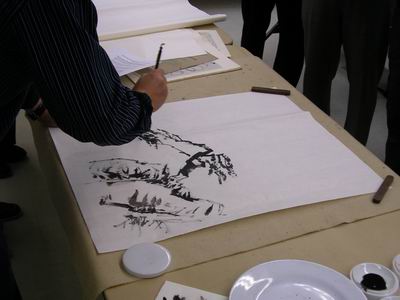 Another bare tree was painted in a lighter grey creating an image of an older, bare tree. Its branches leaned in another direction for an interesting contrast. 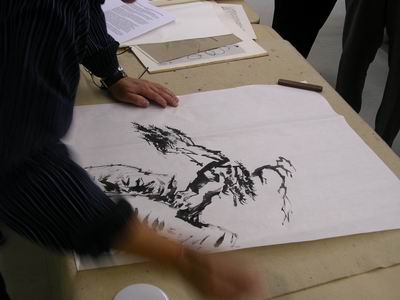 The rocks were darkened for a stark, weathered look. 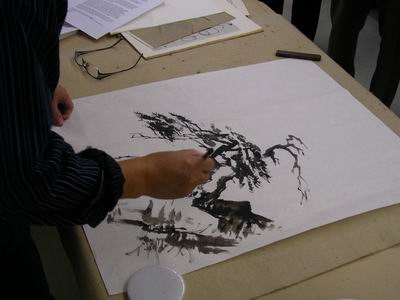 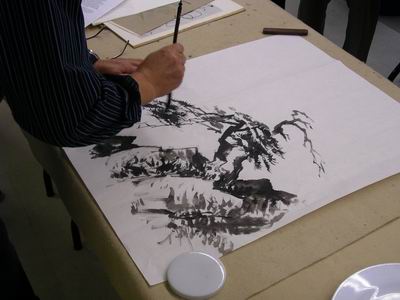 Seen from above through a mirror, the structure of the landscape had a pleasing form. 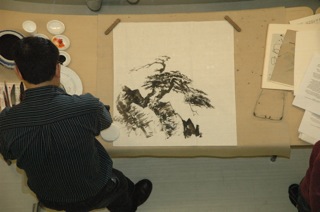 Broad strokes in a lighter grey with a large brush created mountains. 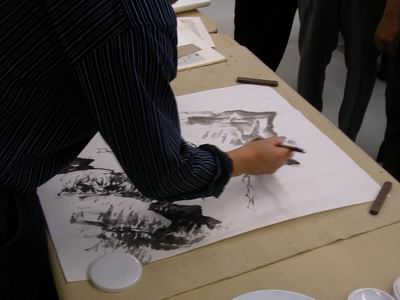 The result was a striking and dynamic landscape, created with the variety of brush strokes shown at the beginning of the workshop. 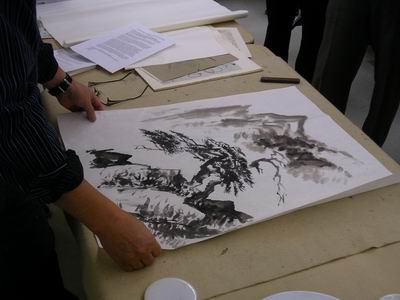 Richard Tang turned to the second part of the demonstration for the workshop: using colour. In the case of colour, Richard told us, paintings will sometimes start with the colour and add the black ink later. 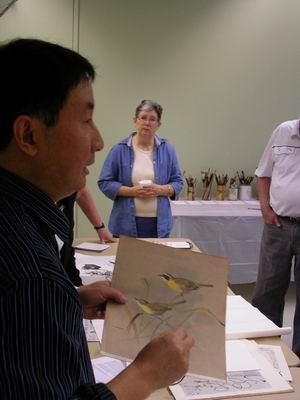 To demonstrate, Richard painted with colour the head of a bird in a few strokes. 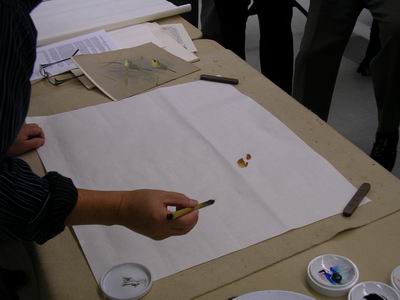 With ink, the rest of the bird became evident. 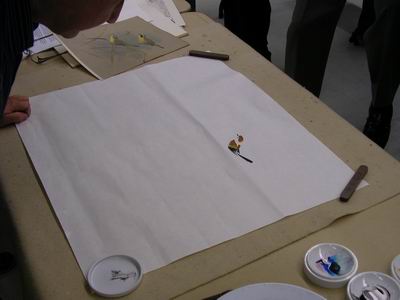 An eye for composition is evident in Richard Tang's work. Large, broad leaves were created in another section of the painting as a contrast to the bird. 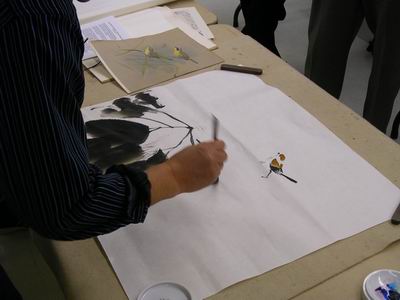 A branch, painted in a single stroke, joined bird and leaves. 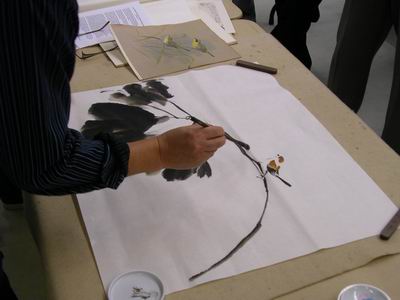 To fill out the painting, leaves were added above the bird along with a branch. Chobos, or dots for effect, were dabbed on the branches. 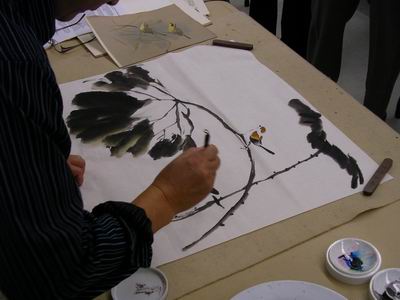 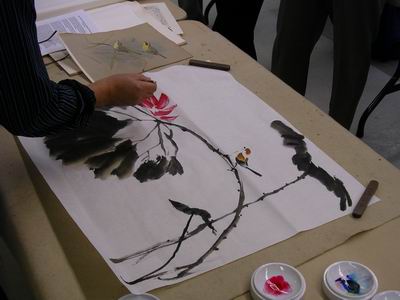 Further details filled out the painting in a well-thought out, proportioned way. 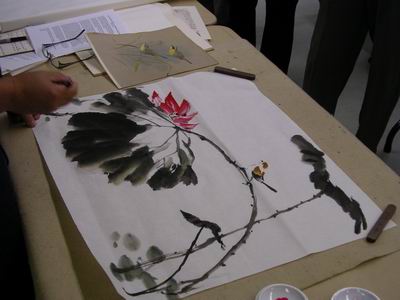 The mirror above presented the painting close to its finished form. 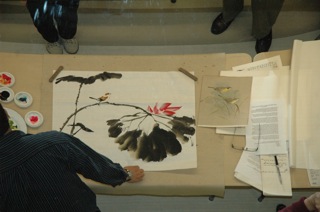 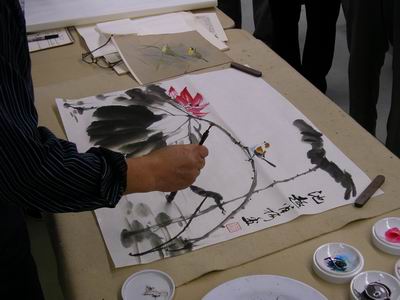 At the end of the demonstration, Richard left us with some handouts to provide guidance. 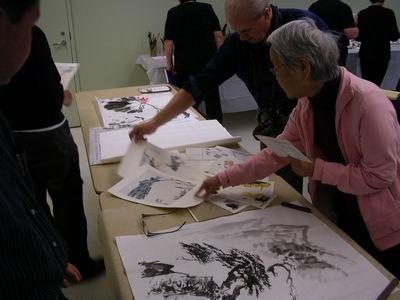 The time had come for us to use these brush strokes with ink and colour. Linda Nakatsu and Dianne Kitazaki helped us with some green tea and cakes. 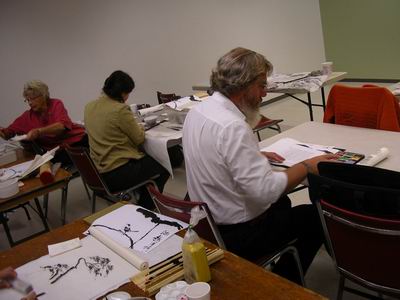 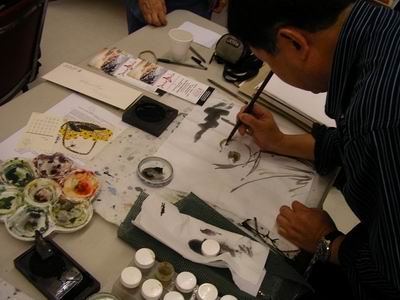 We left the workshop determined to continue practicing these brush strokes with ink and colour on our own paintings.