Calligraphy and painting are two sides of the same coin. And it's a very old coin. Tien Chang believes that studying the brush strokes of calligraphy can help immensely in improving your painting. Tien began his workshop by telling us about the development of styles of calligraphy in China over several thousand years from the shell bone style (literally on shells and bones) to the ancient Kai style and the modern cursive style. 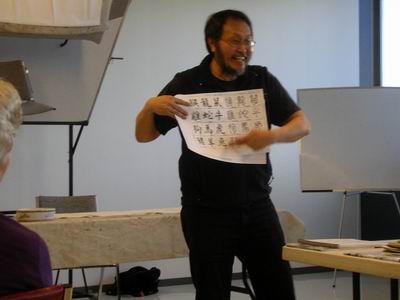 Tien then began working on the brush strokes he wanted us to practice.

Tien Chang outlined the part of a word that required a certain kind of brush stoke. 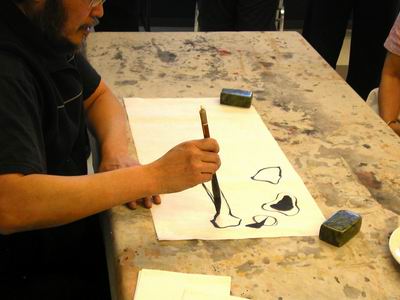 He then filled in the outlines with ink to show the stroke in a large, easily-understood size. These brush strokes required knowing the right amount of ink to put in the brush, applying the stroke at a certain speed and knowing when to angle the brush and twist it. 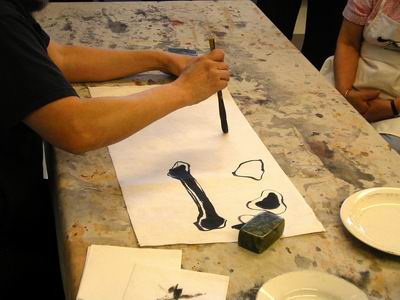 Turning to a word, Tien provided the three strokes that start the word sky in Chinese. Typically, one creates the horizontal parts of a Chinese word first. These strokes were a hook-like stroke with a hooking action at the end. 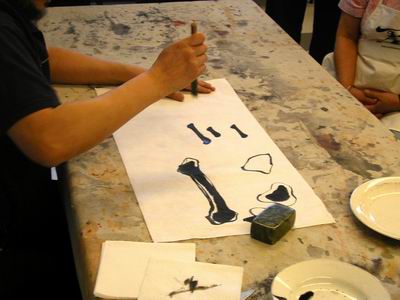 He then added the vertical strokes. Tien circled the ending of one of the strokes for the attention of the workshop participants. 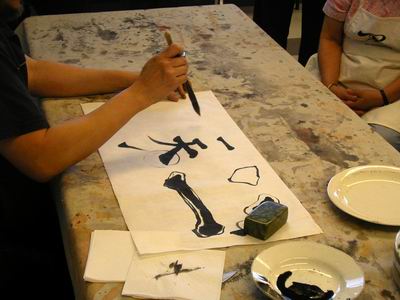 It is the ending of some strokes that require a focus on technique to get the effect from the brush, Tien explained. 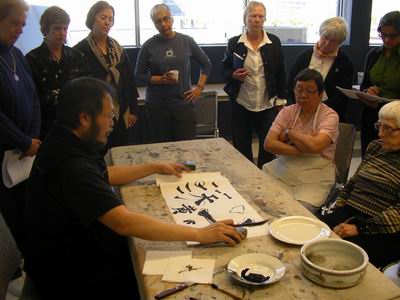 Dividing a paper into squares is one known way of practicing the Chinese characters. You can then apply the parts of a word in a way that puts them in the right spacial relationship to other parts of the word. 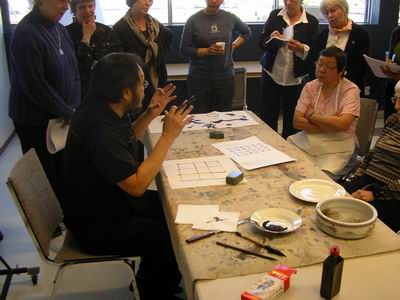 With sky, the first stroke would be in the top, centre square. 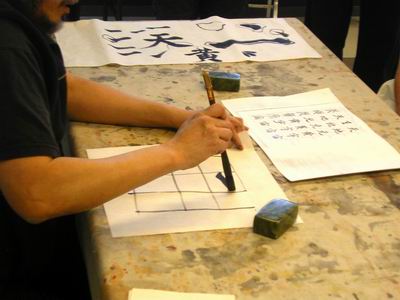 The following parts of the word can be put in the right place and proportion by following this technique. Note that the final stroke uses the hook-like ending that Tien showed earlier to the workshop participants. 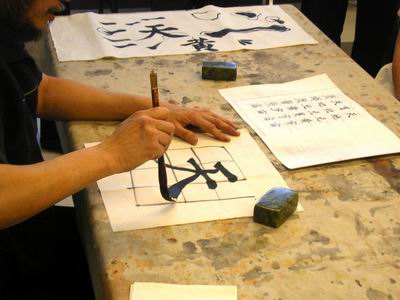 When working on calligraphy, the ink that comes in the bottle will do. However, it should be mixed with water to dilute it. 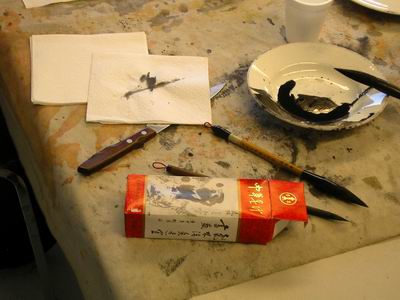 Tien Chang picked up a smaller brush to write in the cursive (or modern) style. 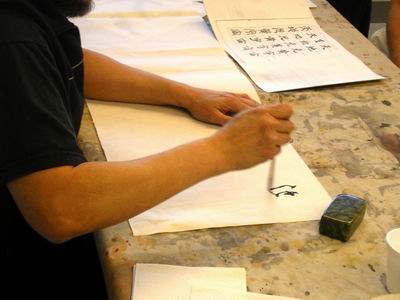 Similar to working with a brush for sumi-e painting, the brush is held upright typically with three fingers and a thrumb. 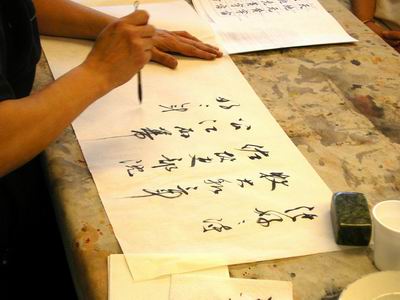 Tien wrote part of a poem for us. As he was writing, Tien reminded us of the state we should be in when writing or painting: peaceful. 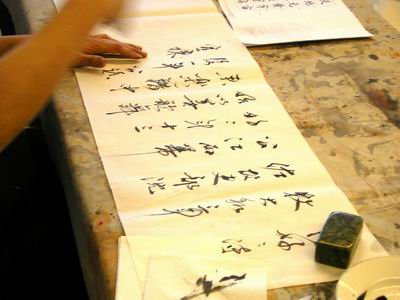 Not all workshop participants were knowledgeable in Chinese, so Tien Chang translated the part of the poem he had written. A government official sees a woman working in a bar many years after meeting her as a dancer and recommending her dancing to others. A tragic life in the intervening years becomes apparent to the official. 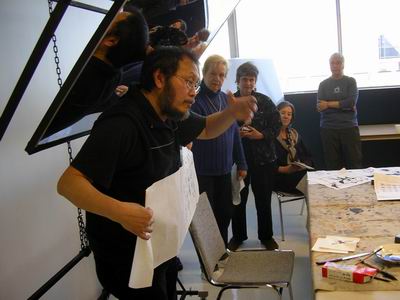 Tien showed us a few more pointers before we would start working on our own calligraphy. 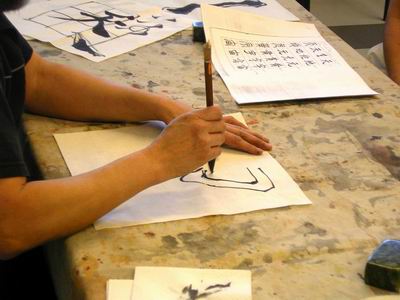 The hook was the stroke that Tien emphasized. At two points it requires a slight stop, jerk and twist of the brush. 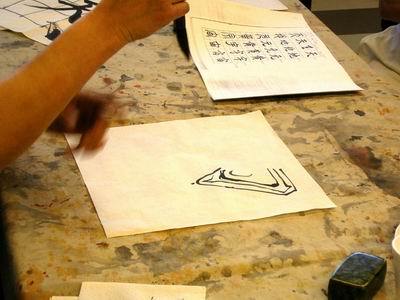 Tien demonstrated it quickly several times in one stroke. 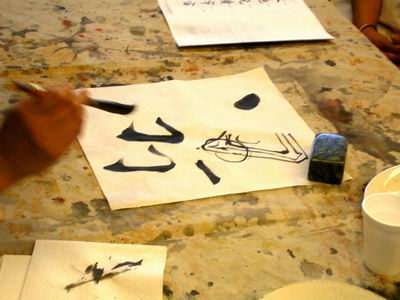 How do these brush strokes for calligraphy apply to sumi-e painting? Tien Chang started a painting. 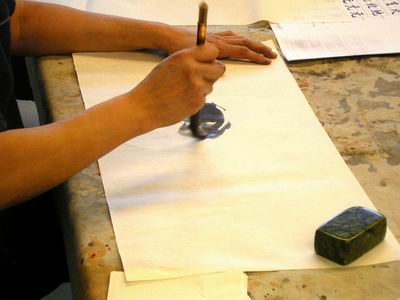 From some swirls, the body of a bird began to appear. 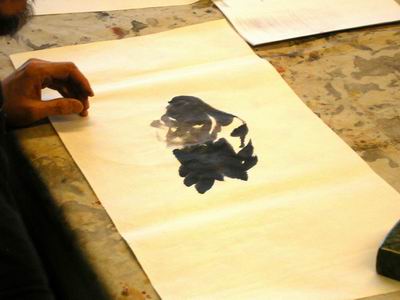 A sleeping bird on one leg with its head tucked into its wing emerged from the painting. 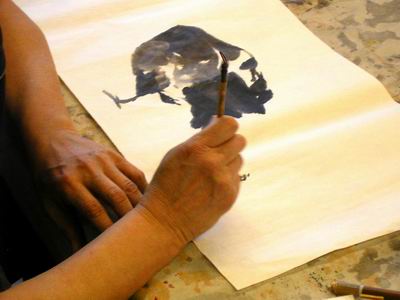 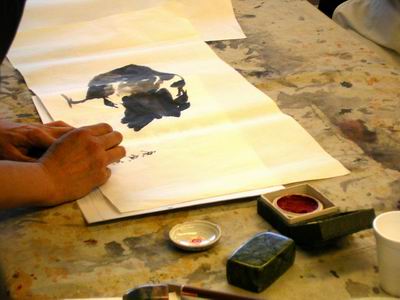 His seal was added too. 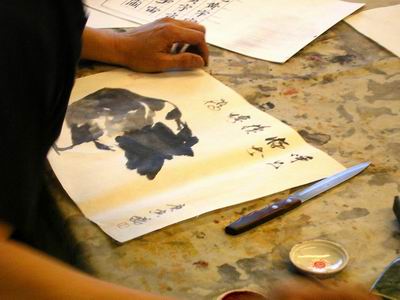 Then it was our turn. Fortunately, Tien Chang had brought along the helpful sheets for beginners that lets you work inside squares to get the proportions right for words. And Tien Chang also gave us words to practice written in the older and newer styles as well as words for the animals in the Chinese zodiac. 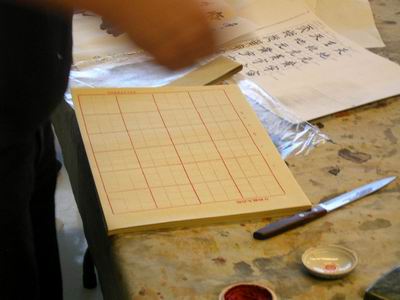 Tien also helped us one-on-one with our calligraphy efforts and for those interested in his book on painting horses, he signed copies purchased that day. We also had some green tea and cakes courtesy of Linda Nakatsu and Dianne Kitazaki, which can help in your quest to study calligraphy. 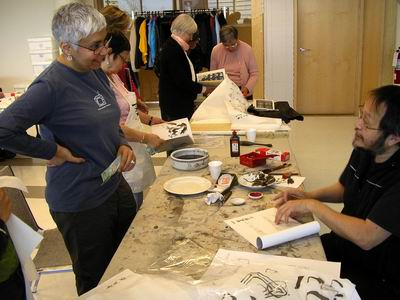 You can find more information on Tien Chang's book on horses in our books section.