Landscapes are an essential part of sumi-e painting or any style of painting. Peter Law is an artist known for his landscapes, which he has exhibited at the Chinese Cultural Centre. In Peter's workshop on landscapes he demonstrated the brush strokes, composition and expressiveness needed for a good landscape painting. Peter was helped by Amelia Ng, who translated some Chinese terms for us. 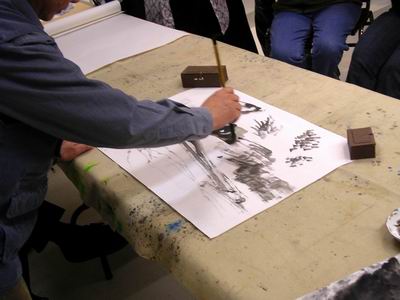 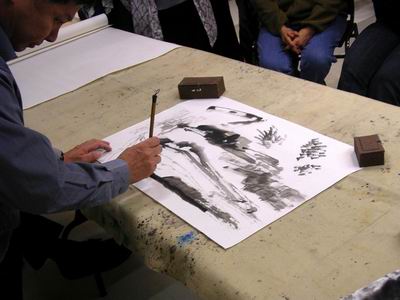 Peter began at one section of a distant mountain range. 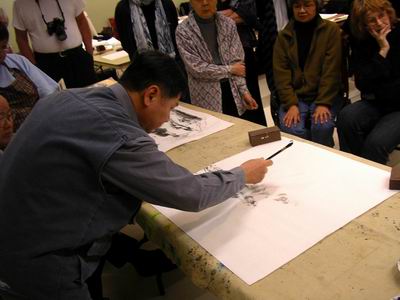 He added some darker, black ink to highlight sections in the mountain range. 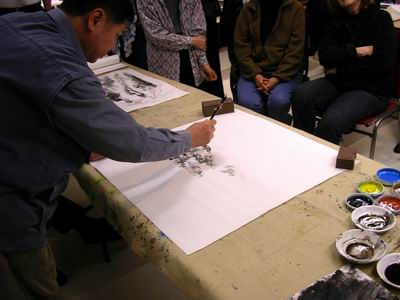 Continuing to other side of the painting, he used a dry brush to create a steep hill leading to the water below. 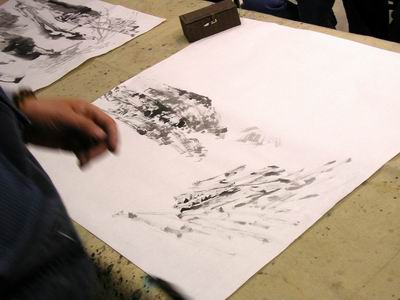 As Peter worked on the painting, he discussed the design of the work with the workshop participants. 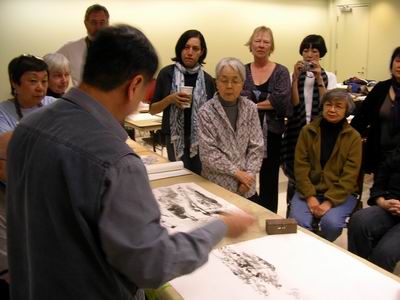 Occasionally, Peter Law stepped back and looked at the entire composition of the painting before proceeding. He had placed the original paper showing the brush strokes he would use beside the painting so workshop participants could see what technique he was using at any time. 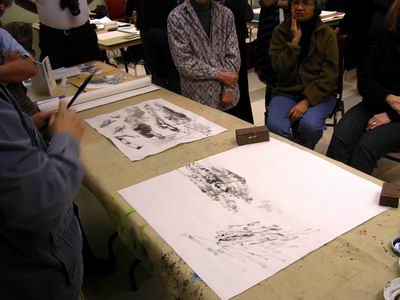 With a single, fast stroke, Peter added the forefront that also provided a shore to the water. 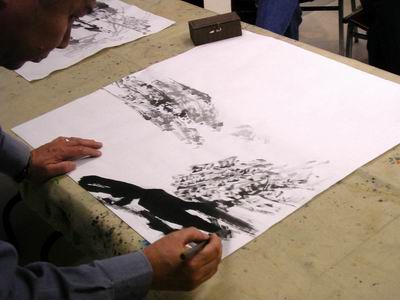 Then he returned to adding more dark black ink to hightlight rocks and smaller islands in the water. 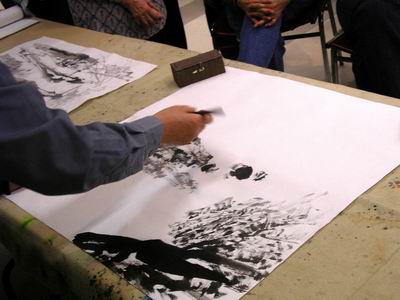 The more distant mountains were painted with a lighter gray. Peter worked with several shades of gray ink so that he could create perspective by using lighter ink in the far off mountains. 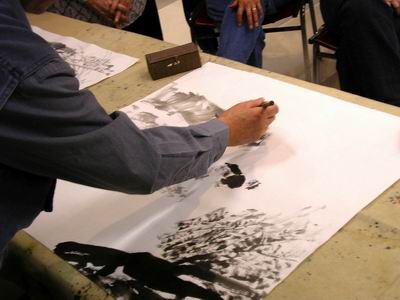 In one corner of the painting, Peter created cliffs. The sharp downward sloping surface was painted with a technique he called the old horse tooth stroke in that the hard surface is like an old horse tooth. 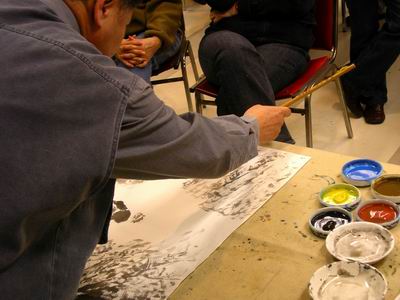 He returned to adding more depth and definition to the painting with by using black ink at the edges of the rock. 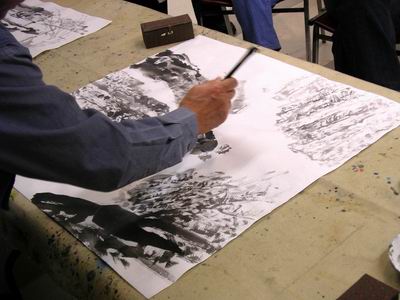 Peter completed the structure of the painting that included the mountains, hills, rocks and islands and the water that flowed around them. In the front of the painting, he had begun a waterfall. He told the workshop participants that at this point he would let the work dry before adding more paint as otherwise the paint would spread and not create the look of a hard surface. 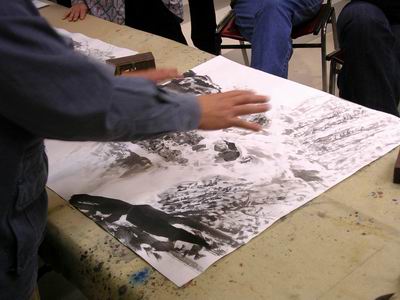 Amelia Ng discussed the principles that Peter Law uses in his work. Expressiveness: The vivacity or life of a painting is central to a work. You should react to it. Technique: Peter uses a variety of brush strokes to create a lifelike effect. Perspective: You should be able to see which rocks, streams and trees are near and which are far through the use of light and dark ink. Composition: How the parts are related forms the composition. Peter carefully placed islands, mountains, streams and the waterfall in a way that created unity to the entire painting. 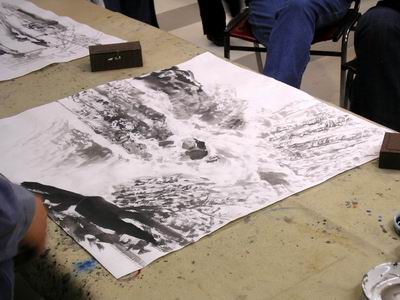 While Peter let his painting dry, we began painting our own landscapes in the workshop. We also had some green tea and cakes courtesy of Linda Nakatsu and Dianne Kitazaki. Peter helped us with some one-on-one coaching. 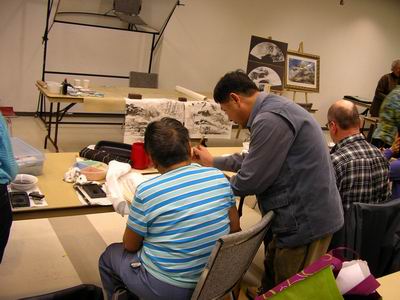 Peter returned to the dry painting to add more dark ink particularly around the waterline. 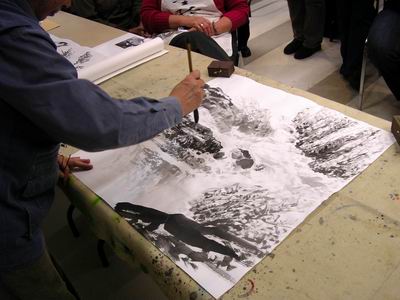 By carefully adding black and gray paint, he made the painting more dramatic and vivid. 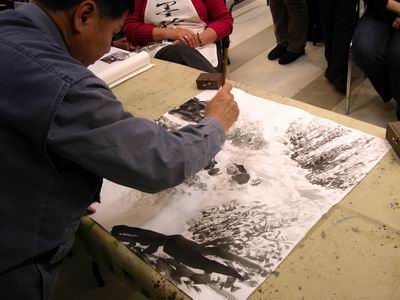 From time to time, Peter stepped back and considered if he would add more paint and in what sections. 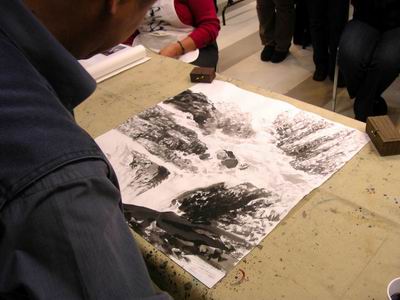 Then Peter Law returned to adding spots here and there to highlight an effect and define each part of the landscape. 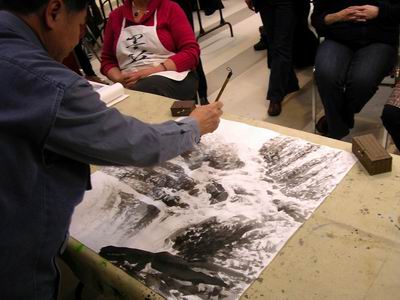 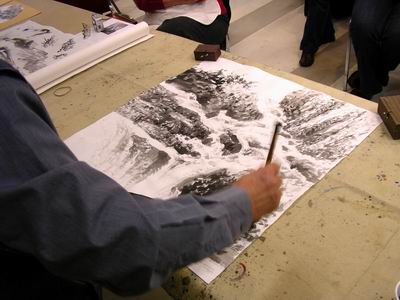 You can find more information on Peter Law, including where to take classes from him, in the links section.