Cats are fascinating creatures, which may explain why sumi-e artists are drawn to them as a subject. The tiger, with its unique stripes, is one of the wildest and most distinct cats. The tiger has captured more interest this year because it is the Year of the Tiger. Roslyn Levin has painted cats many times and in this workshop showed us how to bring our cats to life on rice paper. 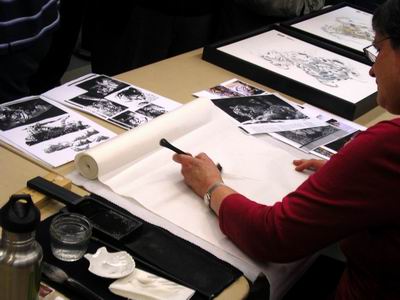 Roslyn began with a wash that would form the backdrop to the tiger's head. The wash was not a total wash covering the entire painting but only parts of the head. Roslyn then put the painting aside to dry. 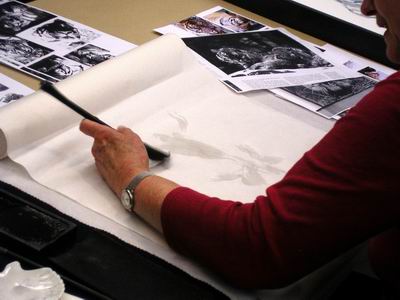 Turning to another painting while the previous wash was drying, Roslyn demonstrated how to create the stripes by drawing with a brush in an upright position while pressing to get the variation in the stripes. 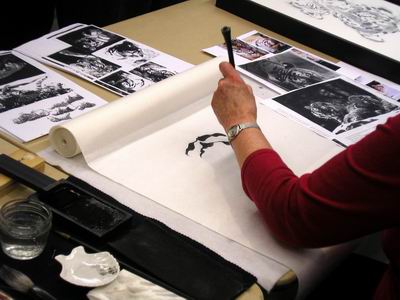 The eyes are also a challenge. Roslyn told the workshop participants that the tiger's eyes are almost round unlike the vertical slits that we associate with cats. 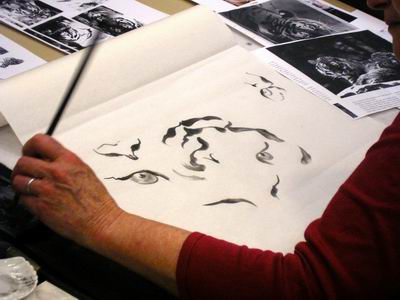 Returning to the painting with the wash, Roslyn showed how to use the wash effectively by drawing the structure of the tiger from it, beginning with the ears. 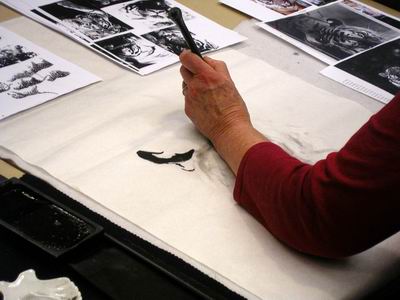 Roslyn brought several paintings with her of tigers and also had a number of pictures that were useful when painting. Roslyn did not not attempt to make an exact painting from a picture but rather used pictures to look at features. 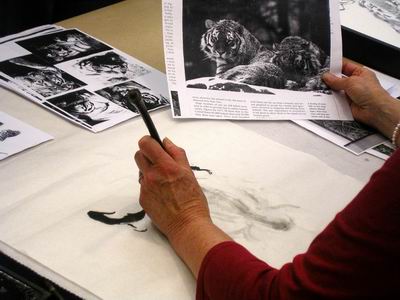 The markings of the tiger were added. Roslyn worked quickly. The eye for example was done in one stroke with Roslyn drawing the lid and then pressing to get the shape of the eye. 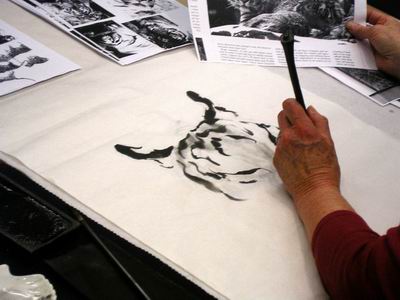 Taking a brush and spreading the hair into a flat line, she created an appropriate brush to paint the fur at the side of the head. 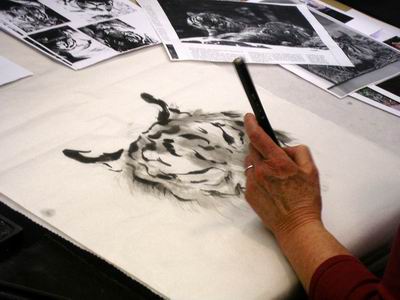 Roslyn then added the mouth and a paw. She has studied the cat for enough years to know just how many rows of whiskers are on the cat: four. 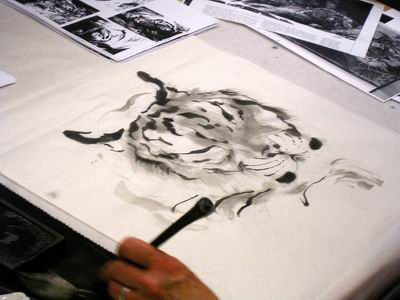 Roslyn added the whiskers with several large, fast strokes. Using some white paint, snow was added as one might find on a Siberian tiger. 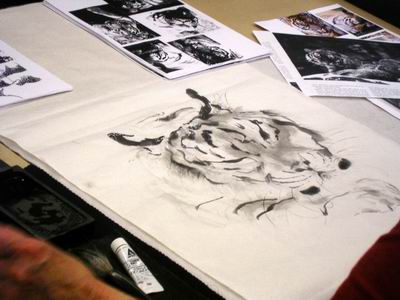 There are several ways of adding snow to a painting, Roslyn used flecks of white on the black stripes she had created. 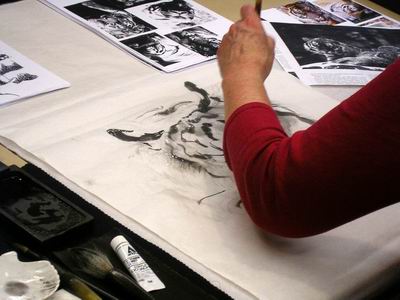 She completed the painting by adding a touch of colour to the tiger. 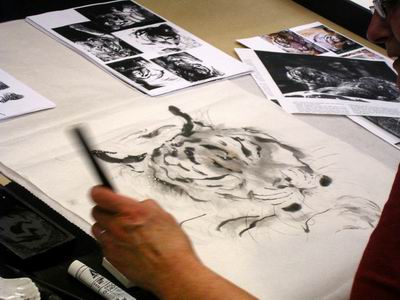 As Roslyn worked, the workshop participants were engaged in an ongoing conversation with her about painting techniques or anything else! 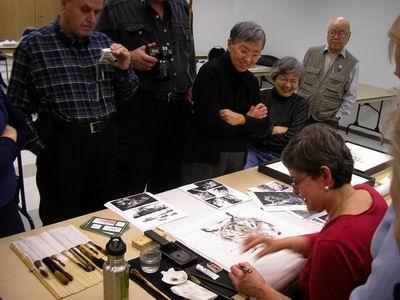 Photocopies were handed out to the workshop partipants, which were helpful later when they tried their hand at the tiger too. 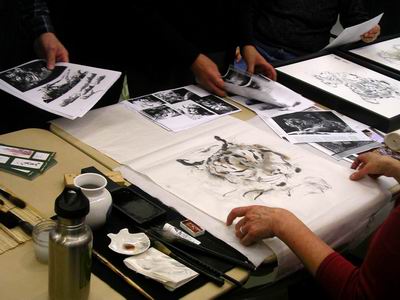 Then Roslyn Levin turned to one more painting of a tiger. 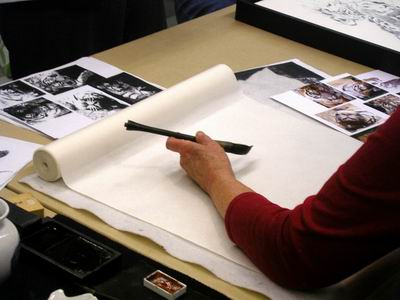 This one almost immediately became a young tiger. Roslyn does not start a tiger painting or any painting with a fixed idea in mind, but works with the image that starts to emerge on the paper. 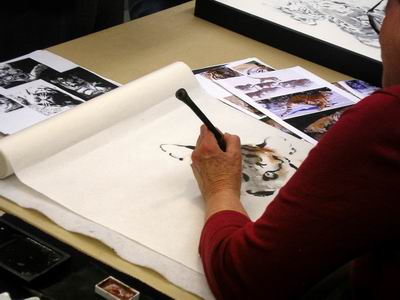 She filled in the nose, eyes and ears. 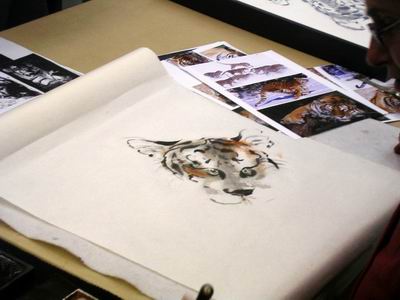 Then Roslyn turned to the mouth, which requires some detailing with a fine brush to capture the lip and the rows of whiskers. 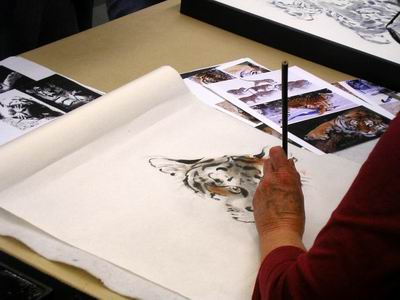 The head was completed. Roslyn wanted to fill in the painting, however, and studied the composition. 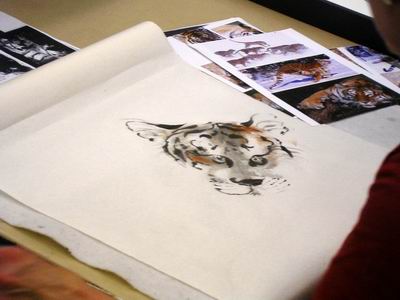 She added more whiskers from the head and then a paw. 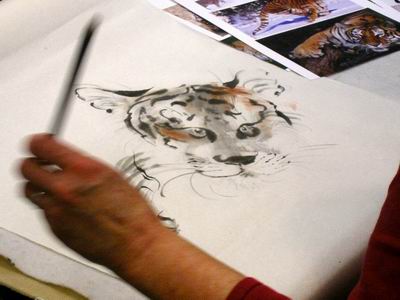 The result was dynamic young tiger almost ready to leap from the page. Then it was our turn to try to paint this beast. 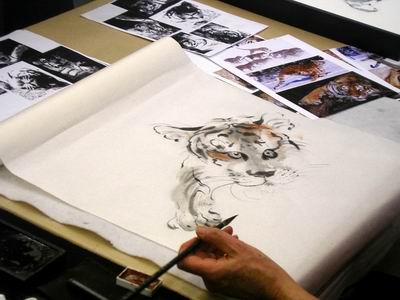 Fortuanately, Roslyn came around with some tips and one-on-one help. We also had some green tea and cakes to help us courtesy of Linda Nakatsu and Dianne Kitazaki. 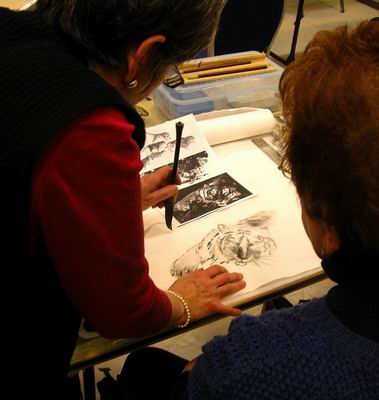 You can find more information on Roslyn Levin in the links section.