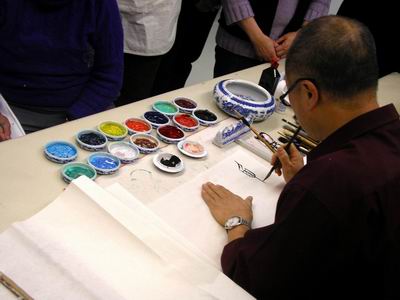 Baoxing Zhang then showed the evolution of the word for fish over time. 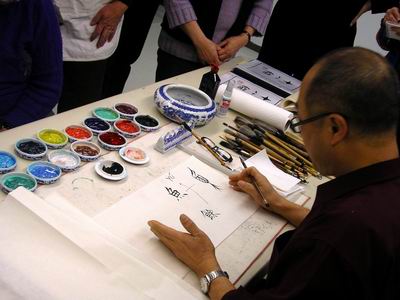 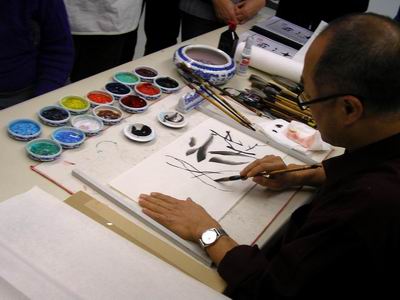 The fourth stroke is done by pushing the brush forward. Baoxing Zhang would use this brush stroke to create the dorsal fin on the top of the catfish and carp. 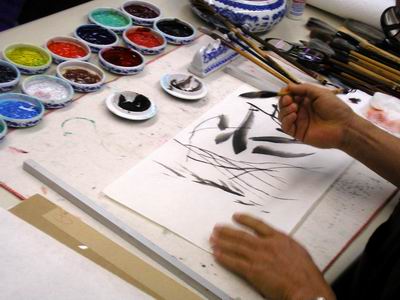 The final stroke is the short curve of the brush, usually with a twisting motion. Baoxing Zhang would use this stoke to paint the head of the fish. 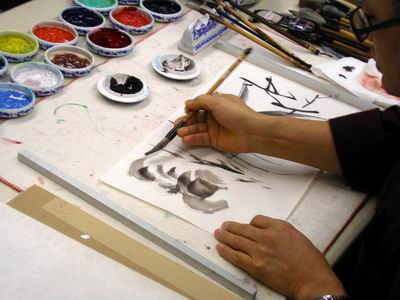 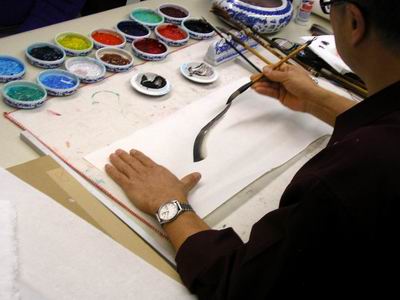 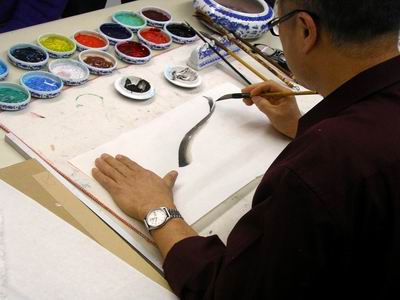 The short, curving brush stroke with a twist created the head of the catfish. 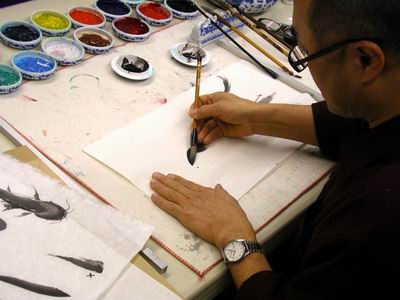 This brush stroke left the darkest part of the ink to the outside. 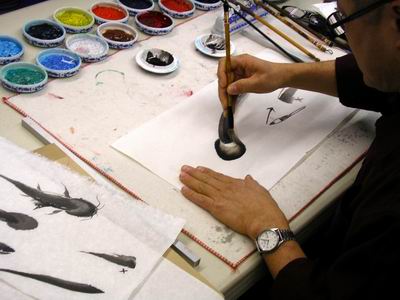 A fin was added. This stroke begins by barely touching the body of the catfish, then becomes broader, and finally becomes thin again at the far edge. 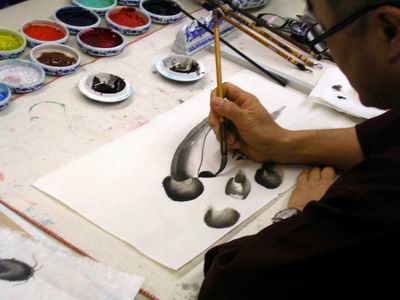 The catfish was completed by using a small, pointed brush to add the edge of the mouth, the eyes, and the whiskers. 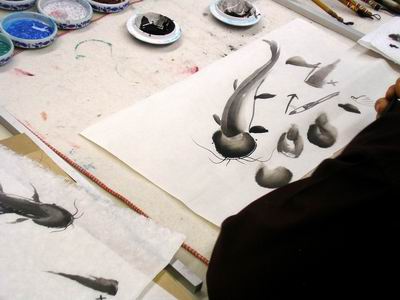 Baoxing Zhang had brought several paintings of the catfish and during the lesson workshop participants asked questions about these paintings and the techniques he discussed. 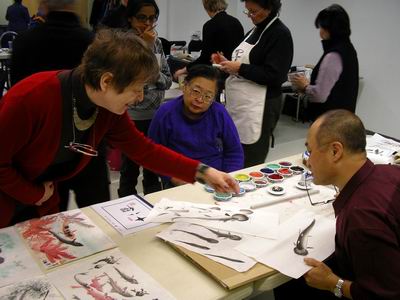 It was our turn to try working on catfish though Baoxing provided some help to each of us. We also had our green tea and cake to nibble on provided by Linda Nakatsu and Dianne Kitazaki. 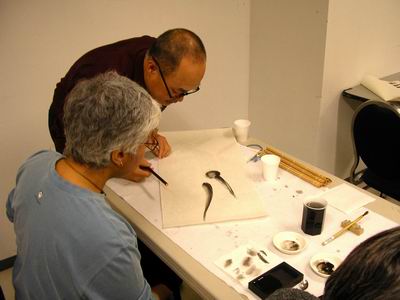 Much of that help was about focusing on the brush strokes taught at the beginning of the class. 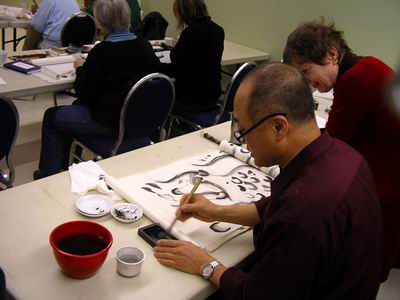 Then Baoxing returned to show us how to paint the carp. The carp is similar to the catfish but is thinner and has scales. 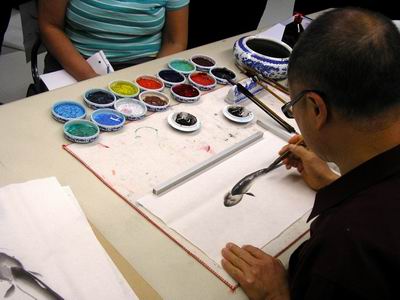 He used some white paint in parts to highlight the fish that we were viewing from above, much like you would see fish in a pond. 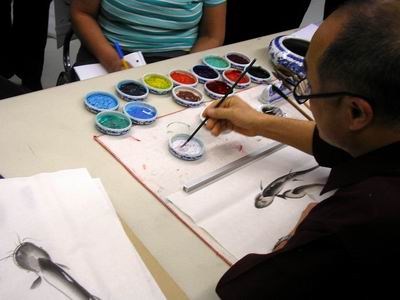 The completed carp was similar to the catfish though scales appear on the carp. They are painted with a fine brush. 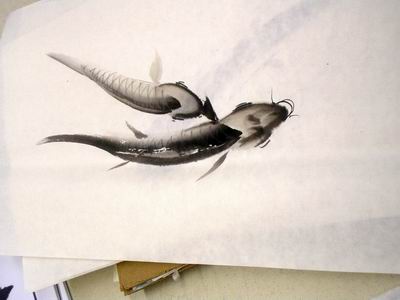 Painting the carp in colour begins with the long, smooth brush stroke. Note that the beginning of the body, where the head will be added, is pointed. Baoxing Zhang reminded us that a common mistake is to make the beginning too square, which means the circular stroke of the head cannot fit onto the body easily. 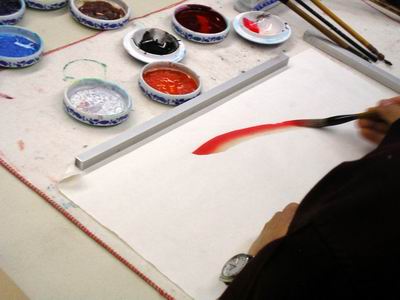 The tail fin was added with the brush stroke that lets the edge of the fin fade out. 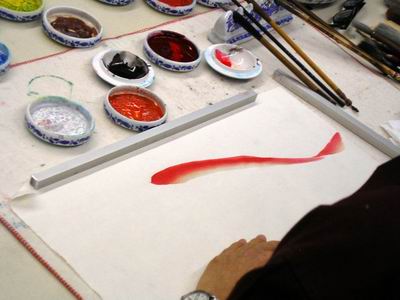 The circular stroke added the head, which for the carp is smaller and thinner. 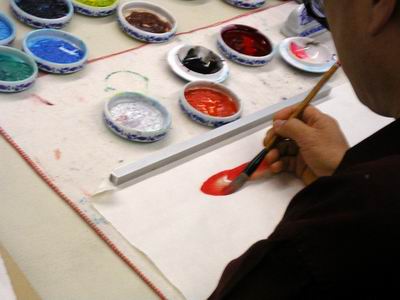 The rest of the fins were added. 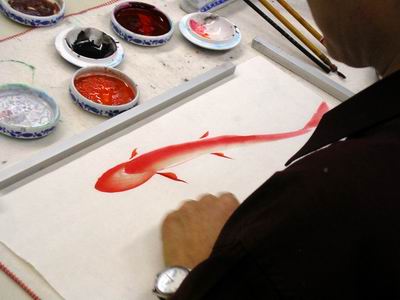 Then the eyes and whiskers and mouth were added. They are different from the catfish. Scales were painted with a fine brush in a criss-cross fashion. 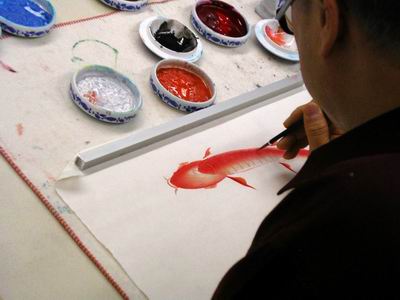 The carp often has black marks on its body, which Baoxing created with black ink. 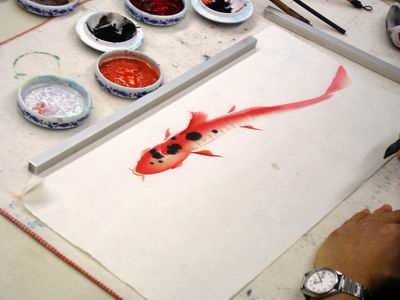 A background technique was demonstrated by Baoxing Zhang using a large brush. 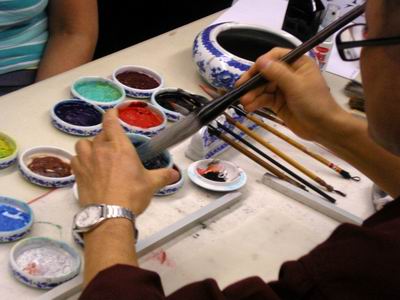 He applied blue paint to the back of the painting. 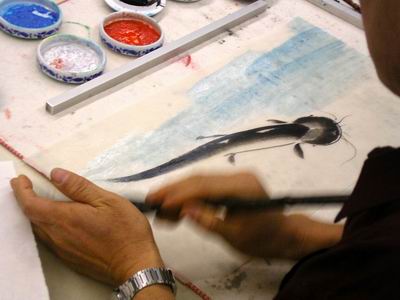 Then using a brush that had multiple points, he added the type of plant leaves on the pond floor that carps frequent. 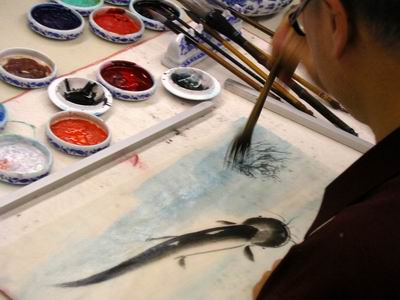 The brush strokes were circular and random. 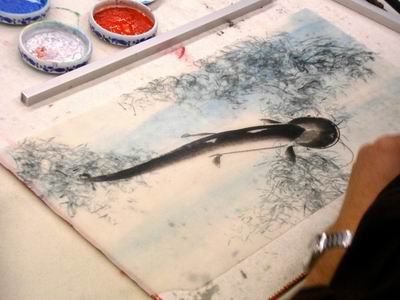 Baoxing then flipped the painting back to the correct side and added some further background weeds. 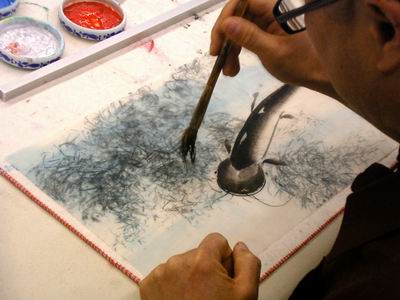 These background effects along with other additions like leaves enhance a painting of catfish or carp. 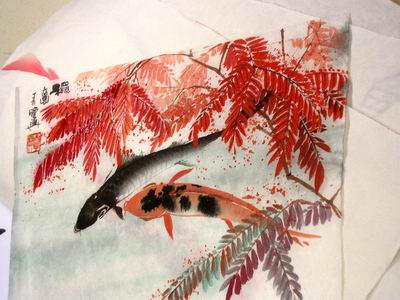