Birds have inspired artists in every field for centuries. Esther Yun, who has led previous workshops on peonies and irises, inspired us to paint these fascinating (though challenging to paint) creatures. 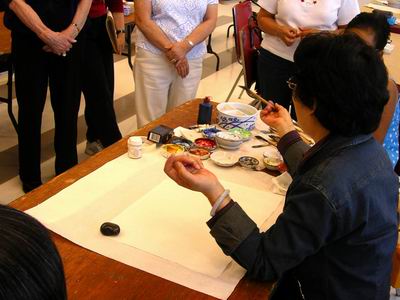 Esther Yun began by planning out her painting, something Esther does frequently as she paints while keeping the rest of the composition in mind. 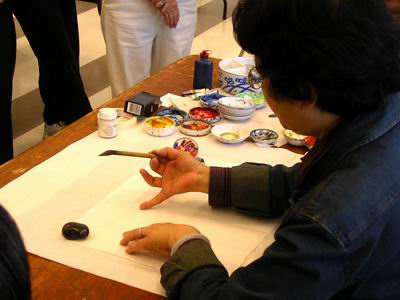 The birds that Esther would paint would become a pair of kingfishers, however, Esther began with the branch that one of birds would be on. 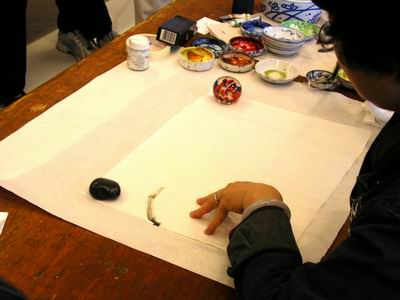 The branch was extended using lines that were varied in speed and in black ink. 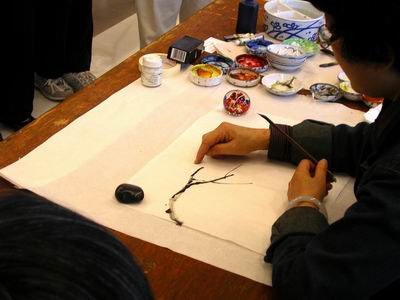 Then the beak and head of the the first bird, the female, were added. 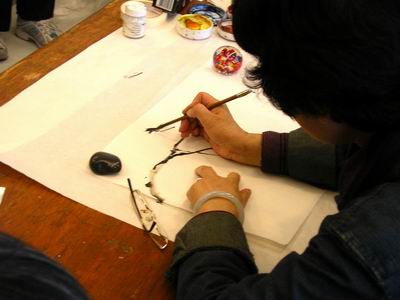 Esther paints with considerable colour and Esther Yun turned to that collection of paints to create a green blue mixture for the feathers. Esther works mostly with natural Chinese paints though Esther will sometimes use the bottled paint or paint in tubes. 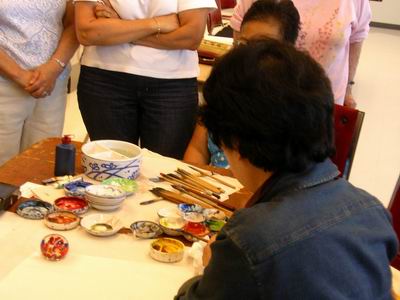 The body was created with several strokes using the green blue mix. 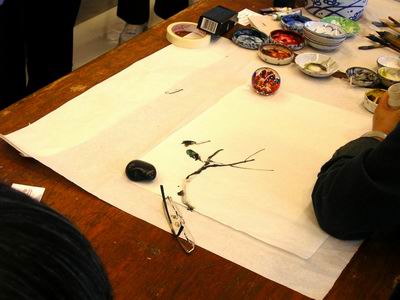 Yellow was used for the breast. 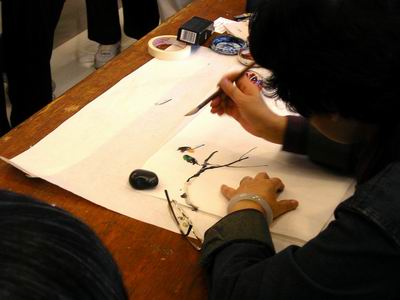 The breast feathers became more pale as they reached the legs of the bird. 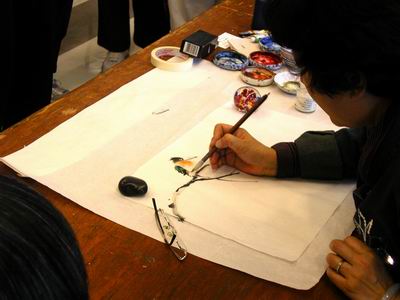 The female kingfisher was a colourful bird at its conclusion. Note that Esther Yun used separate brushes for the colours. 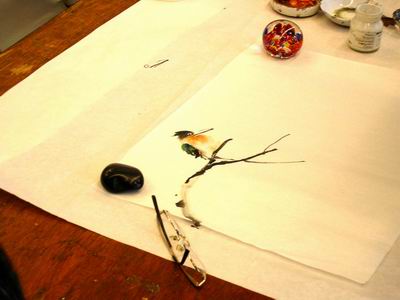 The male kingfisher was added below the female, starting with the beak and head. 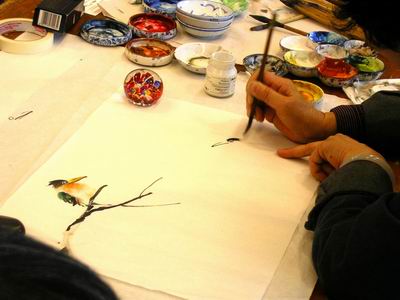 Using the green blue mix and a larger brush, the feathers were added. 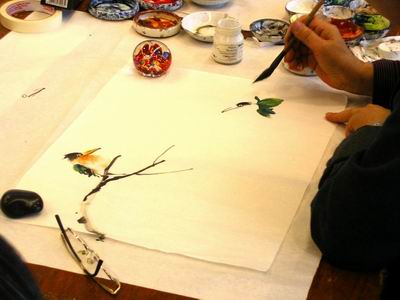 This male kingfisher, which was painted in flight, was slightly more colourful than the female, which is the case in birds. 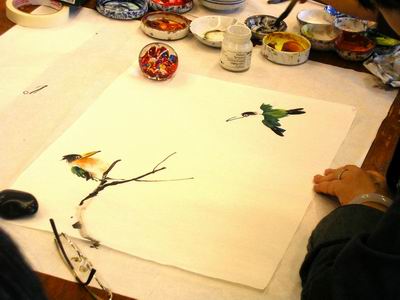 Esther Yun chatted about the painting as she worked on it, which made for an entertaining and educational session for the workshop participants. Esther had several brushes in her hand with different coloured paints. 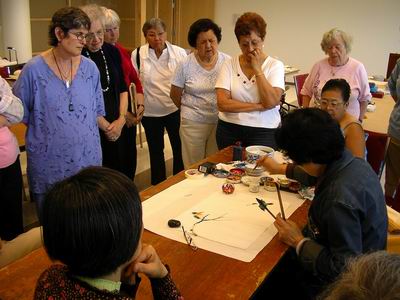 Esther added some darker tones to the male kingfisher to give the feathers a more pronounced look. 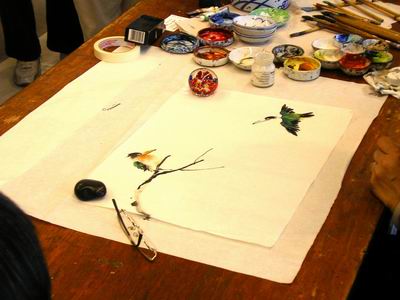 A fish was added to the beak.

Like the female, Esther Yun added a yellow breast to the male kingfisher. 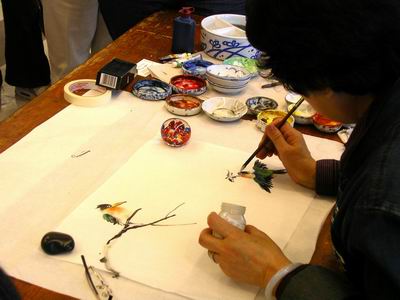 Esther added some white specs to the male kingfisher to complete the second bird. 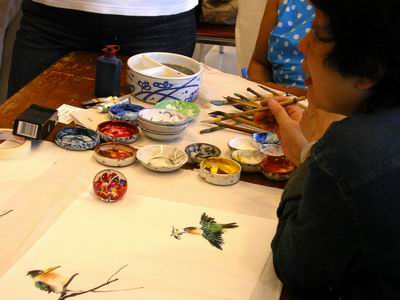 To complete the composition, Esther Yun returned to add another branch near the female kingfisher. 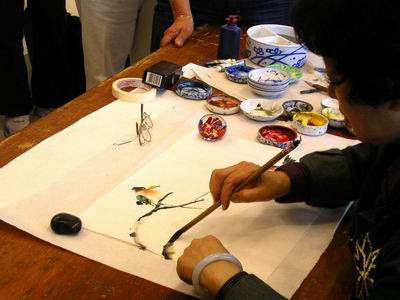 More branches were added about the bird. 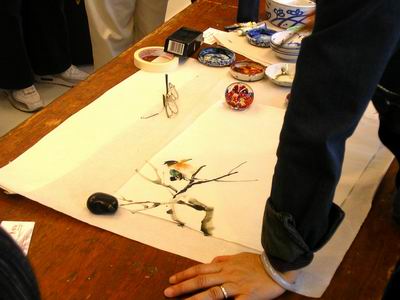 Several drooping branches were added as you would see in a willow tree near the shore where kingfishers are found. 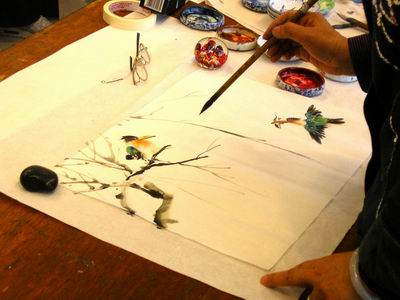 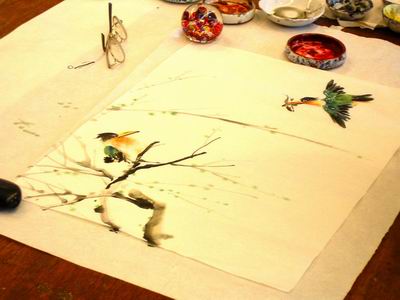 Esther Yun added some words to date when and where the painting was created. 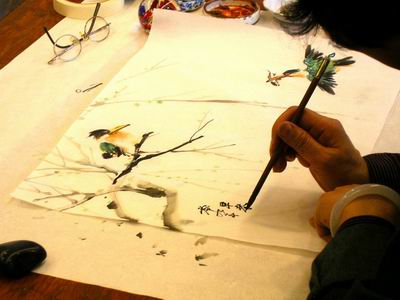 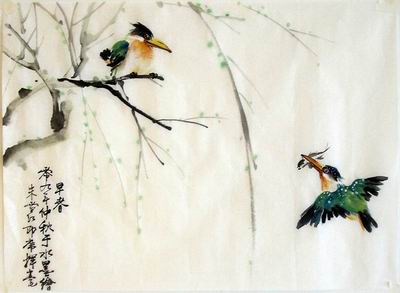 It was time for us to start painting with Esther occasionally giving us some tips. We gathered for our group picture. 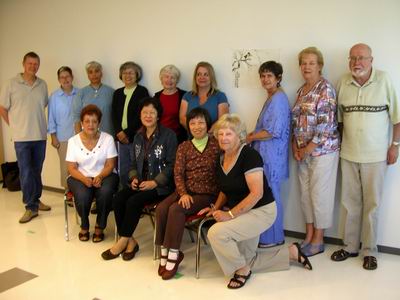 Then returned to our painting table to struggle with what seemed so effortless!