You can learn a lot about sumi-e painting by painting swans. Ask Roslyn Levin, who has studied this bird extensively and painted it many ways expressing a variety of moods. To get ideas for painting swans or other subjects, Roslyn often uses sketches, pictures and observation. Roslyn then plays with the ideas as the workshop participants were to see this day. 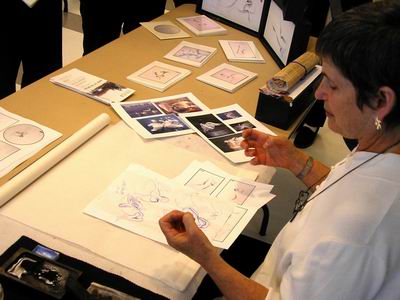 Roslyn distills the ideas to their simplest form, sometimes creating the swan, and other works she has created, into a single stroke using pressure and a variation in speed to get the effect. 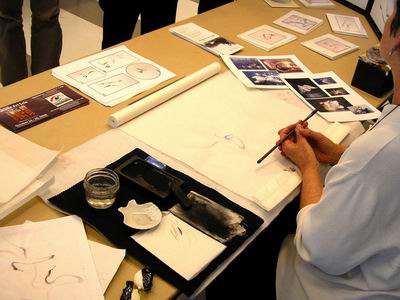 When Roslyn led our workshop, workshop participants had many questions about how Roslyn developed her own style and her influences, which were responded to patiently. 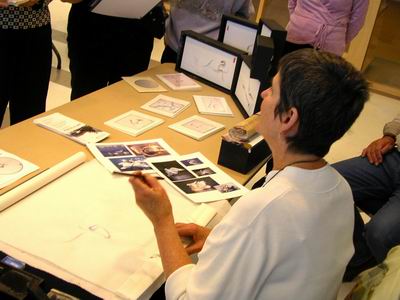 Correct form is important for Roslyn Levin. The brush should be held in the classic upright position and the effect must come from pressure and also from the breath. Roslyn learned these techniques from her teacher in Ottawa, Tomoko Kodama, and still follows them today. 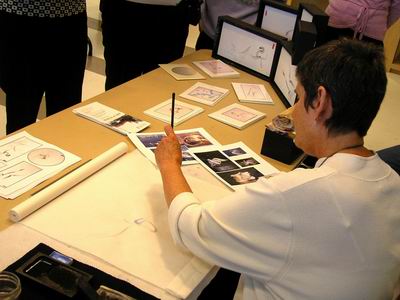 The result (after practicing for a while) is a flowing, continuous line that establishes a unity in her art. 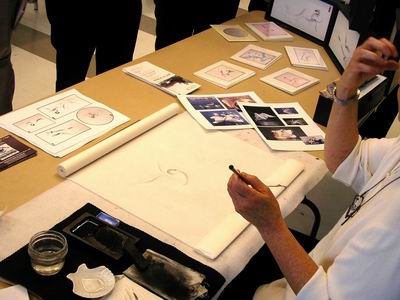 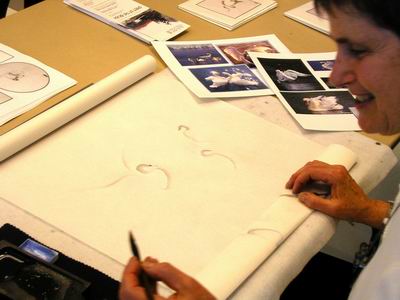 Capturing the feathered look meant using a the side of the brush. 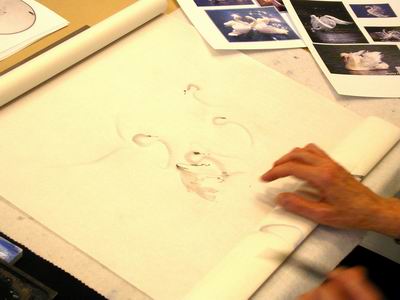 Roslyn often experiments as the demonstrates, such as painting these two swans together in a mirror-like pose. 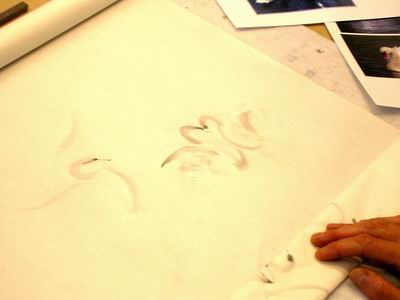 Then Roslyn added some blacker ink to define the outline better. 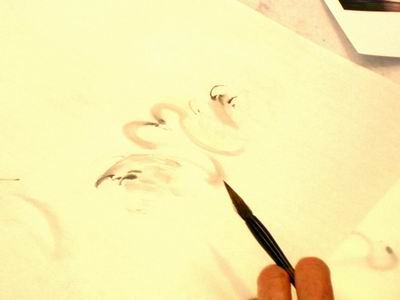 A swan taking off into flight is an interesting artistic challenge. Roslyn uses a spray technique to capture the effect of leaving the water. 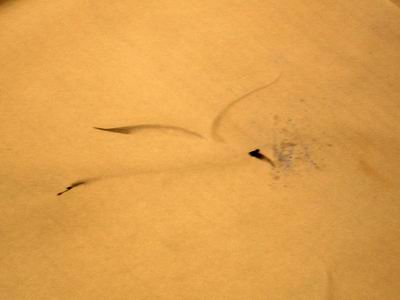 Using another colour gave Roslyn the chance to show how a swan might appear in blue. Roslyn does not use a lot of colour in her sumi-e paintings, but does use colour occasionally for an effect. 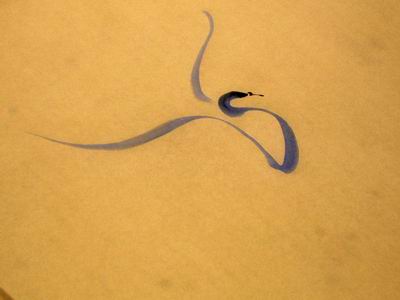 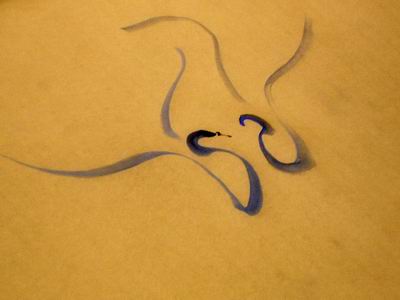 And a mix of blue and black led to these swans. 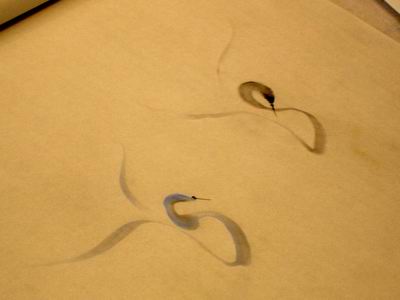 A discussion of brushes and materials also was wrapped into the demonstration. Roslyn is familiar with the hairs of the brush and the resulting impression they will give. Roslyn does have favourite brushes but is inclined to move on to another brush when the first one begins to lose the effect she wants. For rice paper, Roslyn uses a paper that is quite absorbent. 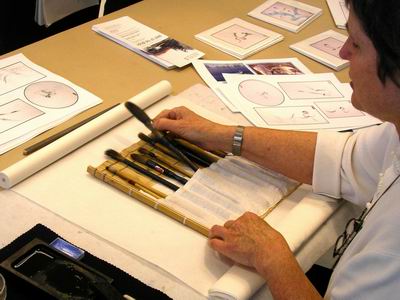 Roslyn began this painting with a larger brush. 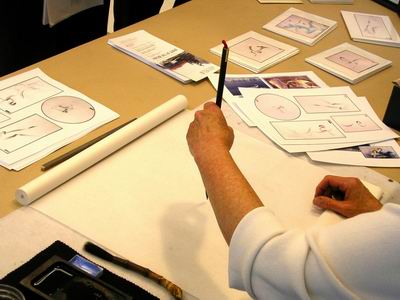 This brush led to two versions of a similar swan, one with the wings as a smooth line and one with ruffled feathers. 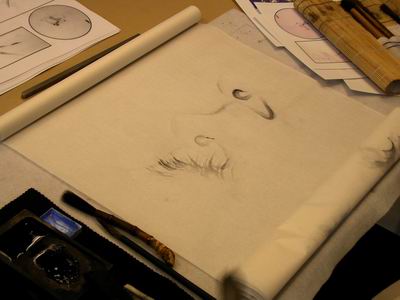 Extending the head with a peak led to a crane. 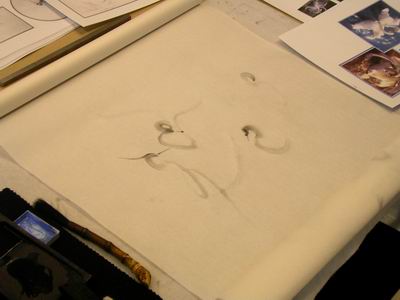 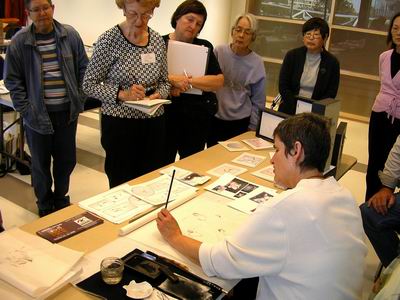 To help us out, Roslyn Levin brought some handouts for us swan painting neophytes. 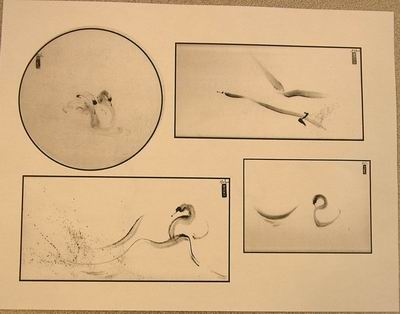 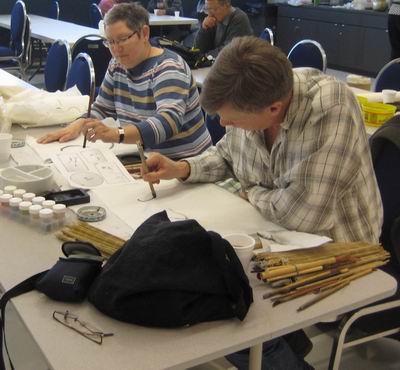 Roslyn came by for some one-on-one swan painting coaching. 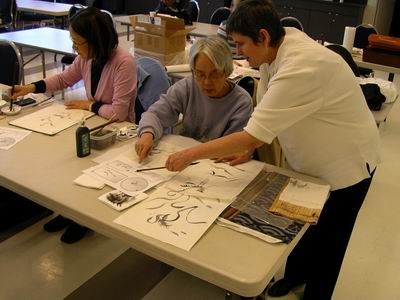 Roslyn returned to demonstrating to show us a few difficult variations such as the moment a swan starts to take flight. 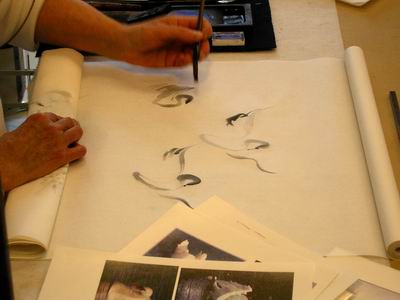 Roslyn Levin's steady, focused hand once again was the central part of discovering how to paint these majestic birds. 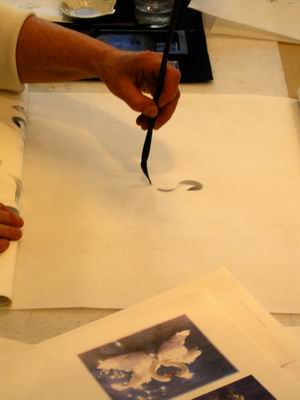 Roslyn examined the pressure points that are critical to painting with this technique. They give the dark and the light parts to the continuous line that Roslyn works with. 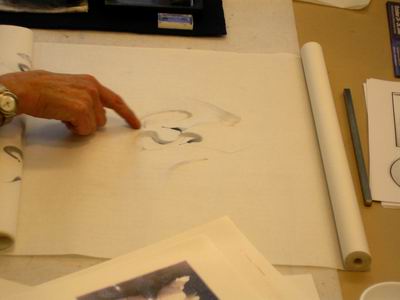 The workshop had flown by, an appropriate image for this workshop. We returned to our painting having learned some important techniques from an instructor who has taken many years to learn them herself.