On the walls around the workshop, Ann Goldring, our haiku instructor, had taped a number of well-known haiku poems. They gave participants a chance to think about this ancient form of expression that Ann would explore with us in the workshop. Haiku, as Ann Goldring explained, has similarities to sumi-e painting. Like sumi-e art, it is brief, conjures an image and lets the reader fill in the rest. 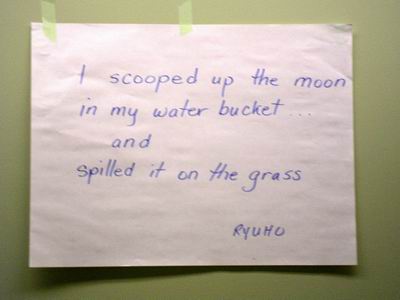 Haiku has a long history dating back centuries. Some of the well-known haiku poets like Ryuho and Basho were quoted in the workshop by Ann. There are some rules followed in haiku: 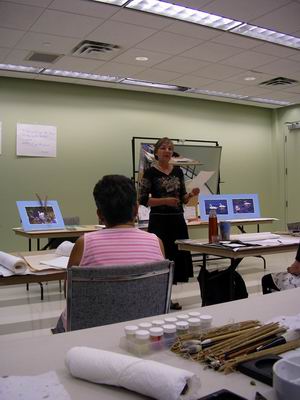 To get us thinking in haiku terms, Ann brought numerous books with haiku poems including her own. 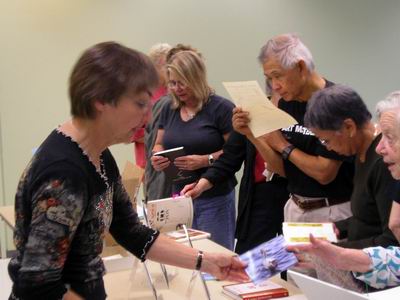 Ann Goldring also provided us with thoughts to stimulate us as we tried our own hand at haiku. Ann calls these triggers. For example, imagine opening your door, walking out into a winter's day and feeling some cold snow on your neck that fell off a branch. Or, imagine gazing into your garden on a summer's day and noticing a spider crawling up a stem. How could you turn those moments into a haiku poem? 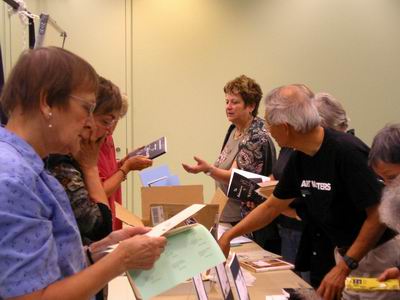 The workshop was more than haiku, it also included haiga. Haiga is painting and haiku together. Moira Mudie showed us a number of books with the two arts combined to produce both pensive and entertaining collections of images and words. 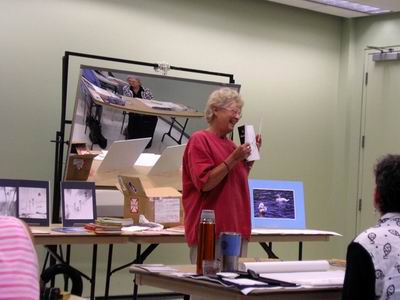 We each had a chance to spontaneously create some haiku and present our poems back to the workshop participants. Diana Fenty recalled creating a haiku poem after hearing a bird in the night one evening. Haiku can be sparked by a sudden insight tied to an image or, vice-versa, the words of a haiku come first, leading to the painting of an image derived from it. 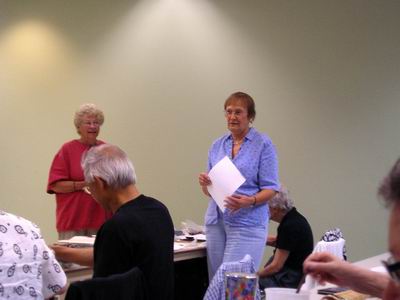 Colin, an associate of Ann, provided some haiku of his own and helped us understand haiku's tradition in Japan and its continued interest today both in Japan and around the world. Ironically, many large books have been written on this brief form of expression. 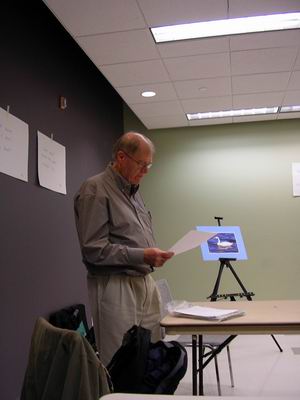 Haiga was also attempted by some of us. Haiga can be thought of as a haiku painting. This example by Moira Mudie has the poem in the top right of the painting and the image to complement it. 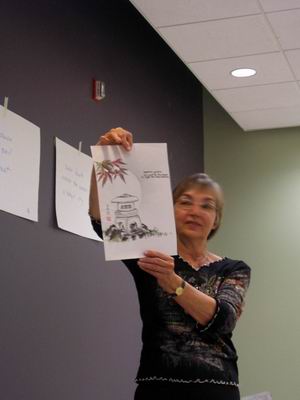 We left with many ideas on how to link haiku with sumi-e painting. Our future exhibitions will no doubt be influenced by this stimulating workshop.