Baoxing Zhang brings a special workshop to us each year when he introduces the animal that represents the year in Oriental culture. This year was the year of the rat. Even though rats do have some good attributes, culturally speaking, such as their courage, flexibility and enterprising nature, they are to some, not the most lovable of animals. Baoxing told us that we would be painting a rat variation: mice. Baoxing suggested we use a goat hair brush for more control of the ink in the brush. 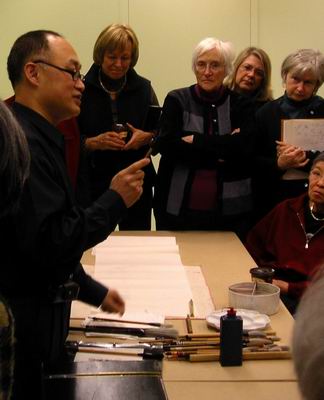 Baoxing Zhang had brought several examples of his work showing mice and squirrels, which are painted in a similar way. 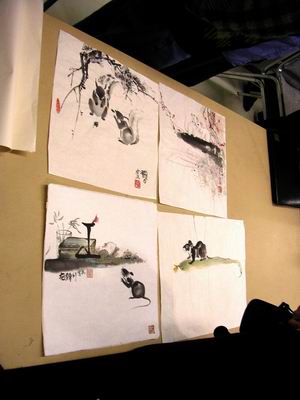 Baoxing began by drawing the old and modern characters for rat and writing the pronunciation of the word for rat in English. 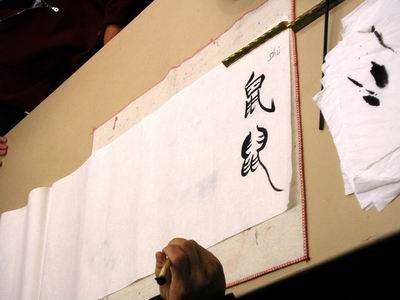 Then he showed us the component parts for the mouse he was about to draw: the head, the ears and the legs. The head is painted by loading the brush with ink on the tip only so that the nose of the mouse is darker. 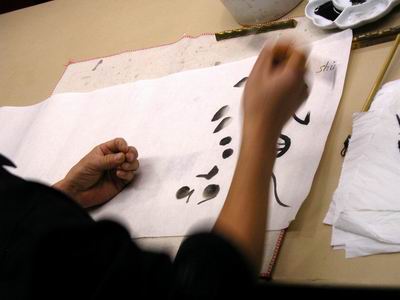 Baoxing also drew the tail for us. It is drawn in one continuous stroke using the whole arm. 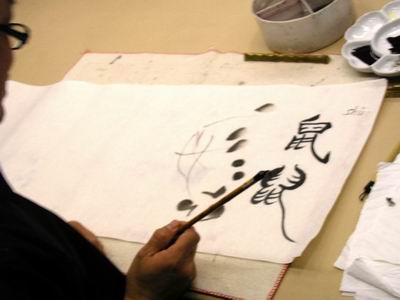 Then Baoxing Zhang created his first mouse. Painting the mouse begins with the head using the brush with ink only at the tip. 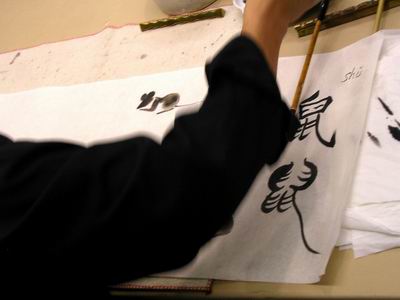 The mouse was an assembly of the parts practiced earlier. 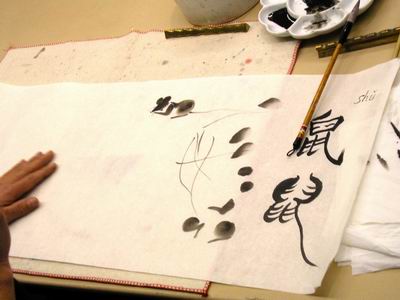 Another mouse was added from a different perspective. 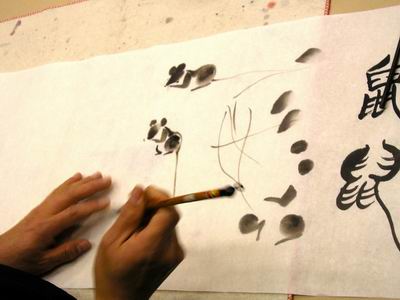 Baoxing also demonstrated composition in the workshop. In this case pairing two mice for an interesting effect. 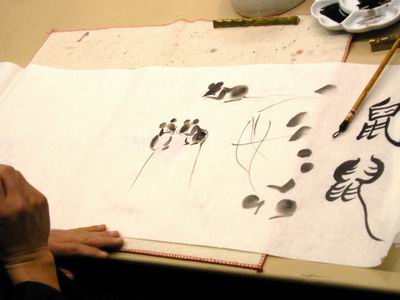 Another two mice were shown together in a view from the back. 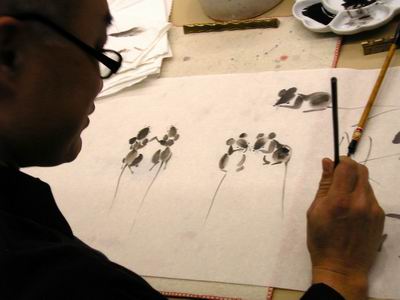 Baoxing Zhang continued with more mice as he continued to experiment with different angles. 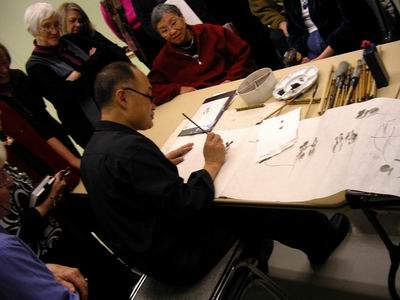 The mice collection included an assortment of views. 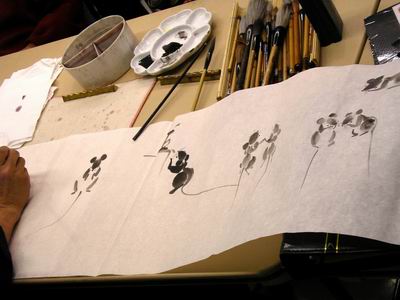 It was our turn to paint some mice with help from Baoxing Zhang. 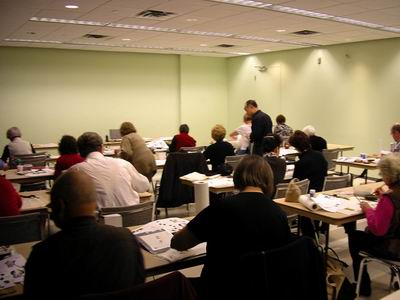 Squirrels have a similar structure to mice except for their tails. Baoxing returned to show us how to paint squirrels based on the mouse we had learned earlier. 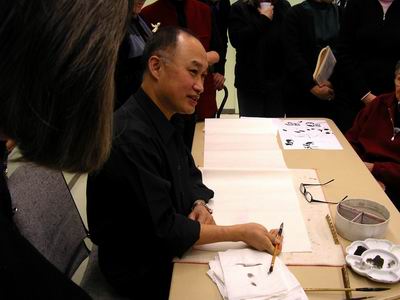 Baoxing used absorbent paper to take out extra water and get just the right amount of dark ink on the tip of the brush. 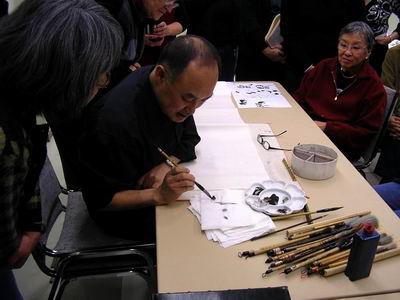 Baoxing emphasized that the tail would require a large brush with spread hairs. 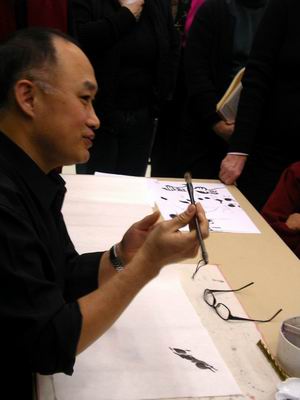 The effect created a bushy tail. 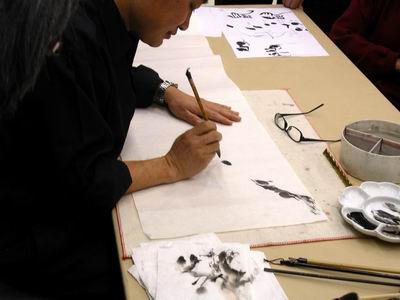 As with the mice, Baoxing created another squirrel as part of a composition of playful squirrels. 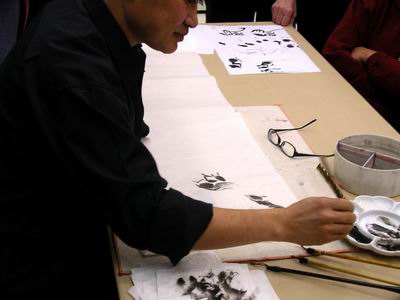 Painting two squirrels together is a challenge as the tail occupies a lot of the composition. 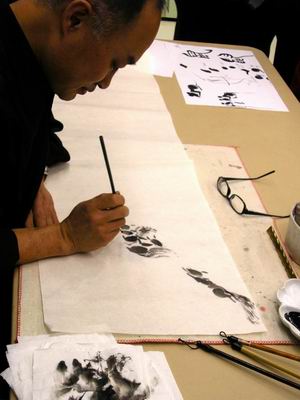 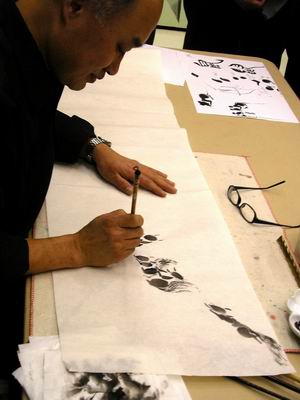 The effect was a pair of chatting squirrels. 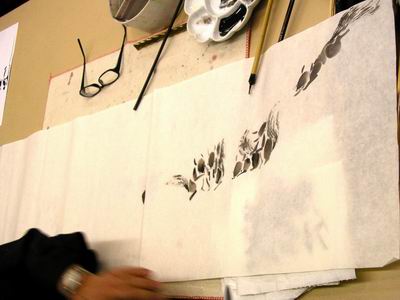 Several more squirrels were added in various positions. Note that the head and legs are similar to the mouse. The main difference is in the tail. The ears are also slightly different and less rounded than the mouse's ears. 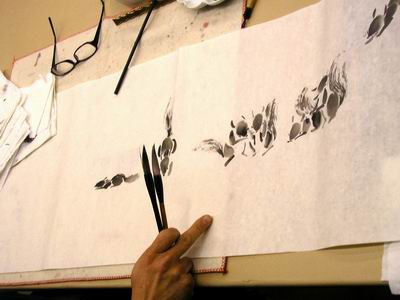 As before, Baoxing Zhang tied his composition together, as if the squirrels were part of a collection you might find scurrying around your back yard.

Baoxing returned to the mouse to show us how to paint a mouse using the detailed, lined approach. 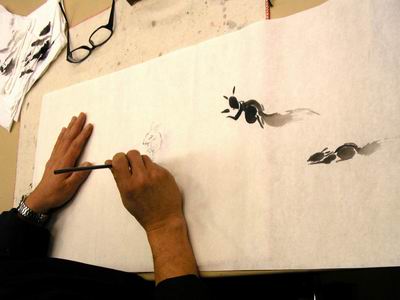 This mouse also used the same set of mouse parts as drawn earlier but in the detailed, line diagram that some artists prefer. 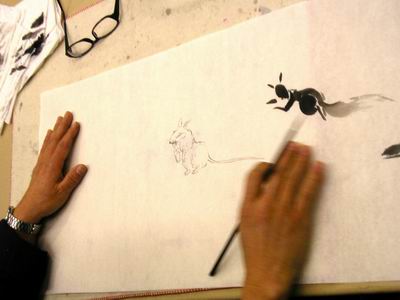 The mouse had a similar quizzical look as others created before. 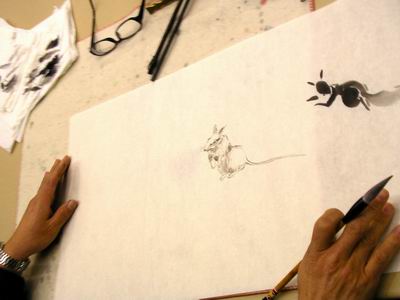 One workshop participant was on his way to perform at a magic show. He brought out his rabbit, which became the new model to draw. 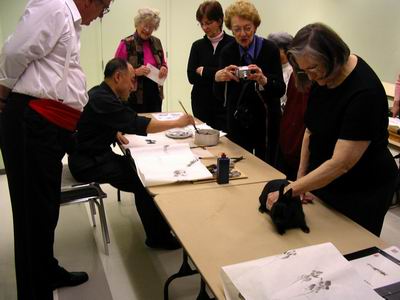 The shape of the rabbit has some similarities to the mice and squirrels. 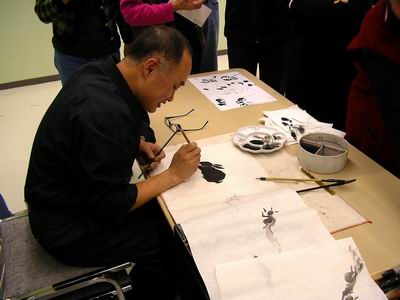 These variations show how the rabbit fit into Baoxing Zhang's pantheon of animals. 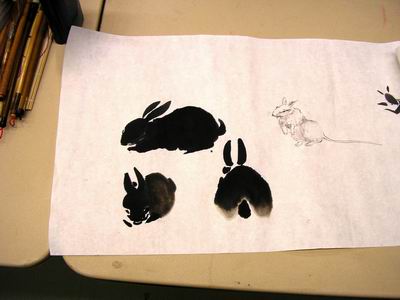 Baoxing Zhang left us wanting to paint little animals all week long. Baoxing has several books that can help you draw these little creatures too.