Capturing the dynamics of the subject is what is important to William Ho. His shows at the United Nations, the House of Commons and the Varley Art Gallery are typically filled with vivid, expressive paintings. William's workshop on fish and crabs began with a single stroke to capture the movement of a fish. 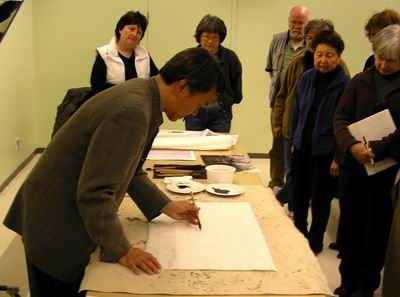 Using only sumi-e ink, William's opening stroke captured the back and tail of the fish. 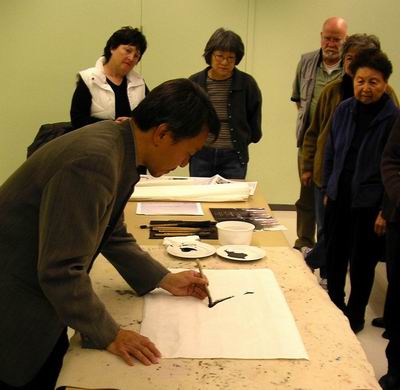 A second stroke added a fin and the outline of the belly. 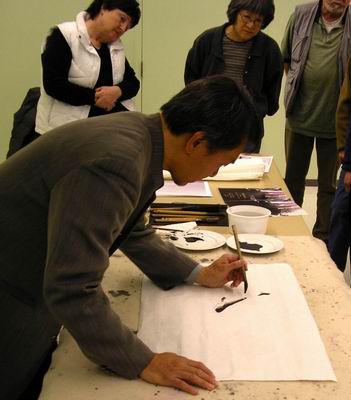 Similarly, a second fish, crossing behind the first was added. 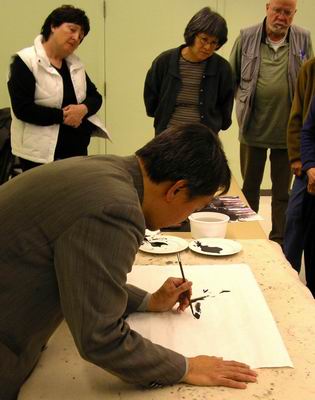 In his third fish, William began to create a composition of a school of fish. 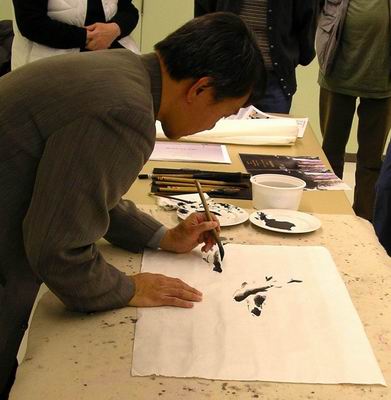 The first three fish were shown an different angles, capturing the flexibility of the fish. The fourth fish had an interesting perspective, as if the viewer were looking directly down at it. 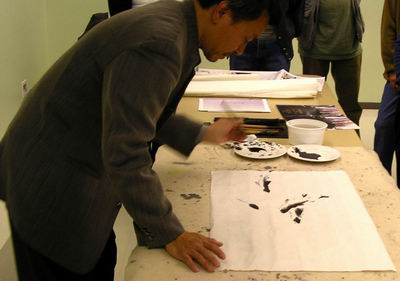 As with the other fish, it was done in a bold stroke with minimal additional strokes. 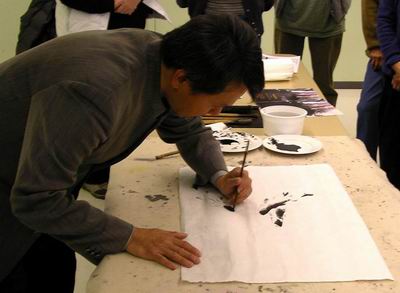 William turned to a second painting where he demonstrated the strokes and structure of a fish. 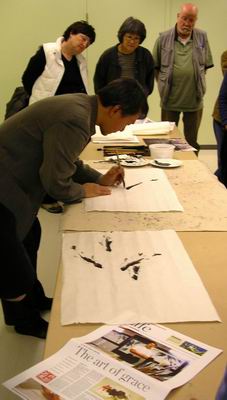 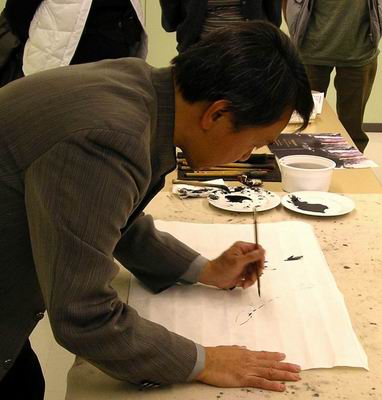 William then discussed the art of capturing the essence of a fish in a few strokes. How do we paint such fish ourselves? Practice, practice, practice. William Ho puts it this way. Painting is 90% practice and 10% genius. 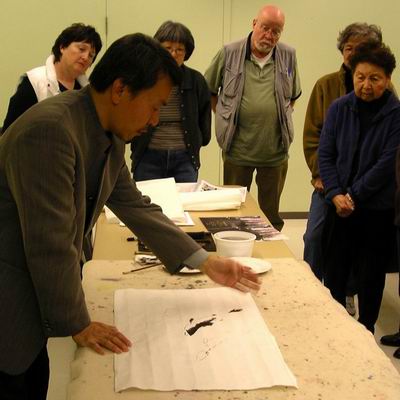 This close-up picture shows the dynamic quality of the fish William created for the workshop. William Ho's fish are not completely detailed, but they capture the essence of the school of fish. Notice also the composition of the fish. How each one contributes to the overall painting. 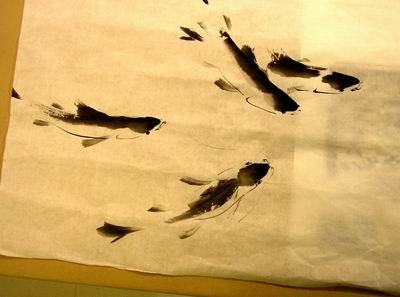 At this point, the class began their work on fish with William emphasizing the motion and dynamics of fish. 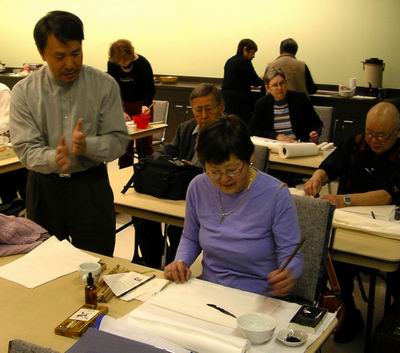 William Ho is an internationally-known artist and his paintings and philosophy have been captured in some of Toronto's daily newspapers. William has founded a charity, Hope for the Future, to raise funds for AIDS victims, particularly children in China. 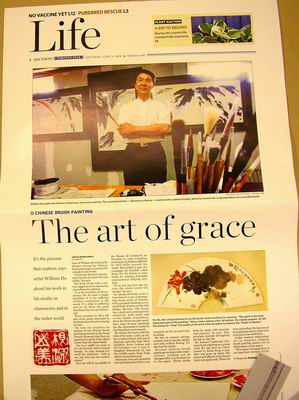 Adrienne Arvidson read an article in the workshop that included William Ho's artistic and philosophic beliefs. 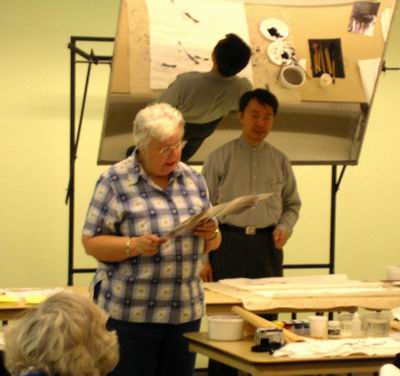 The second part of the workshop turned to the crab. William often contemplates the painting before putting any ink on the paper. 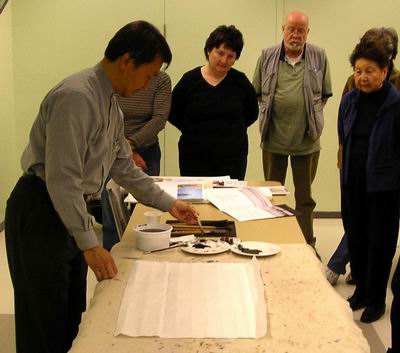 William began by creating the body in two strokes that placed the brush flat on the paper. 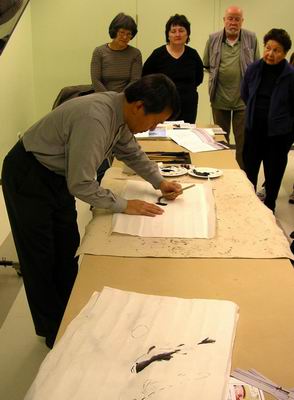 Then came the legs in straight strokes. 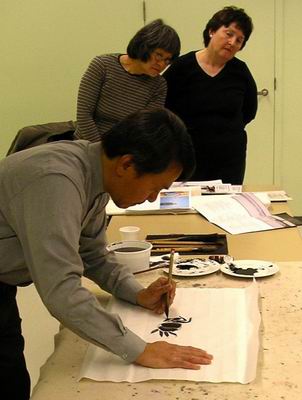 The legs were extended to include the smaller parts of the legs. Three strokes create each leg. 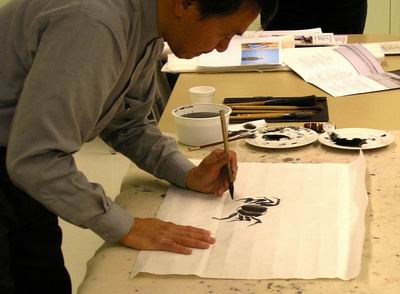 The claws and eyes were added last. Again in bold, simple stokes with little added rework. 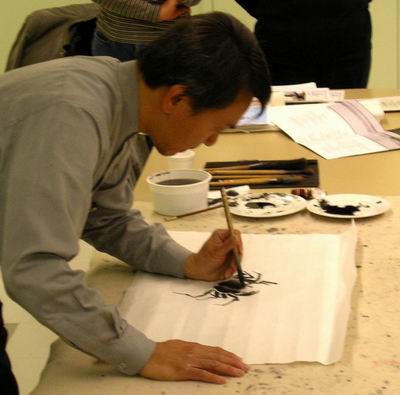 A second crab was added to the composition. 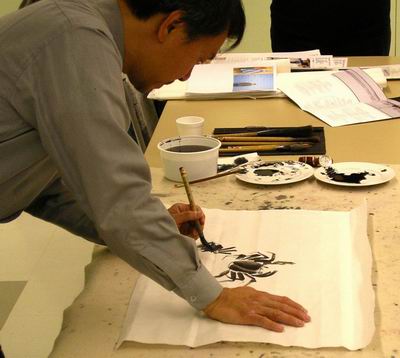 William followed a similar process adding legs and then the claws. 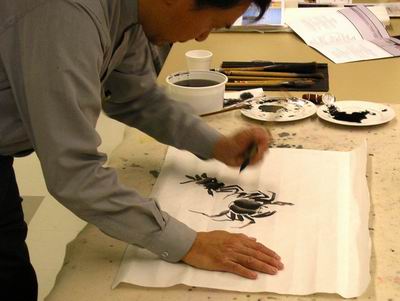 William reminded the workshop participants to focus on the dynamics and crab-like essence of these sea creatures, similar to the fish. 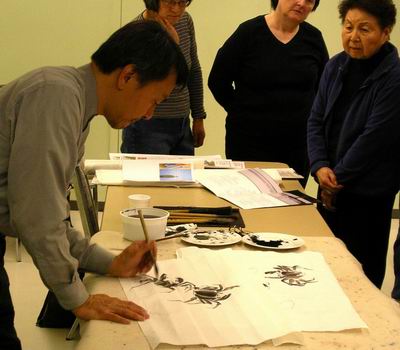 This close-up demonstrates the almost-alive crabs that William paints. Notice that the legs are not symmetrically arranged. This irregularity makes each crab distinct and more realistic. 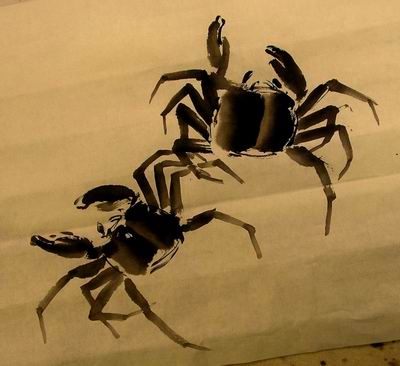 As with the fish, William demonstrated the structure of the crab once more before we returned to our own painting. 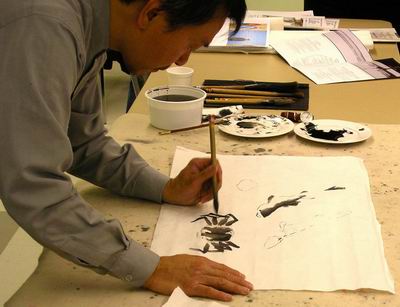 This close up shows the structure of a crab. 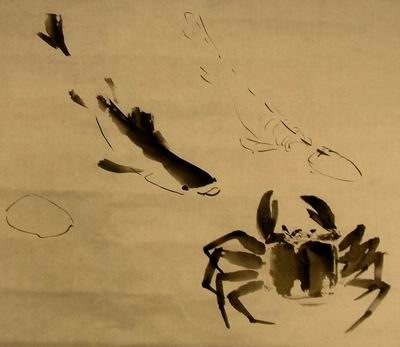 William helped us with some of the finer points of creating crabs that seem to crawl about on the paper. 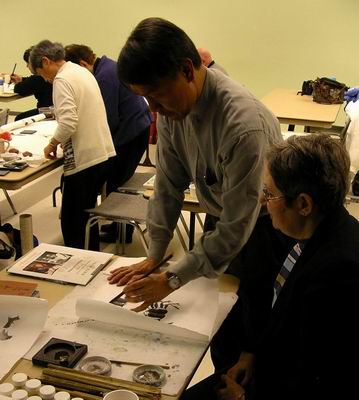 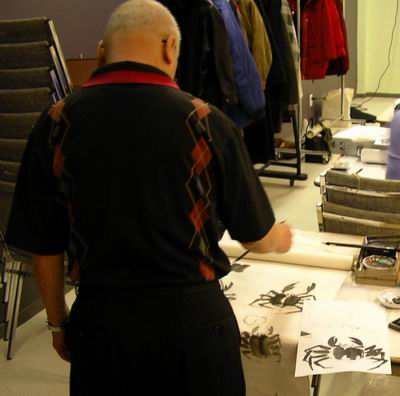