This year marked our 25th anniversary as an organization.  As an indicator of that longevity, we chose as a theme for our show: Rocks and Pines Endure. Many of our works on display reflected that homage to age and the wisdom that accrues from it. Our many visitors - over 1000 - found this year's show as timely and timeless as the subject. 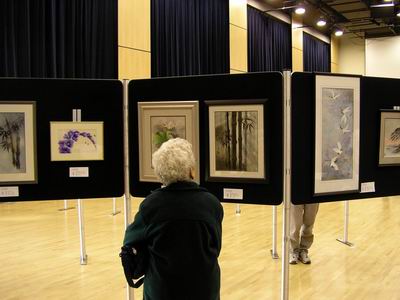 It was a large show for even the sizeable Kobayashi Hall with over 100 paintings and over 100 works of shodo (Japanese calligraphy). In keeping with our theme, the shodo created was from the older style of characters from which modern Japanese writing emerged. The shodo works were created by the students of Noriko Maeda, instructor of shodo at the Japanese Canadian Cultural Center. 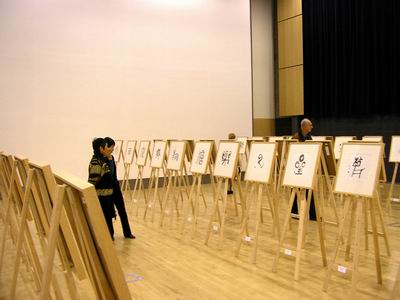 The Ruth Yamada Award for Excellence in Sumi-e, the highest award in the show, went to Above the Mist by Mary Ikeda as selected by this year's judge Dick Chen. Dick wrote of this work that it was a majestic painting. The ancient mountains offset by the solitary pine created a unique expression of the power and mystery of nature. 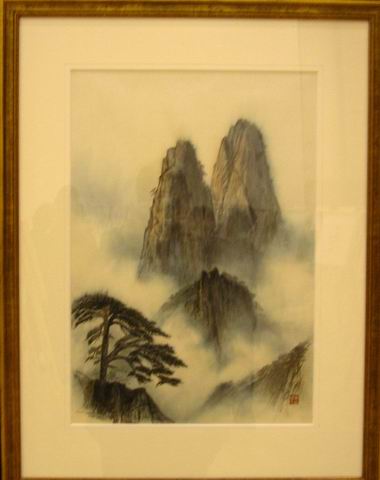 Autumn Splendor by Terry Adachi was noted for its lifelike quality. Dick Chen wrote that you could feel the movement of the trees and the cool breeze of autumn in this painting. 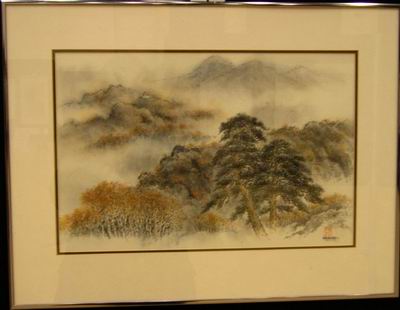 A Tranquil Moment by Marie Ikeda was a poetic moment to Dick Chen. He wrote that there was a sense of expectancy in this painting of two ducks in a marsh. 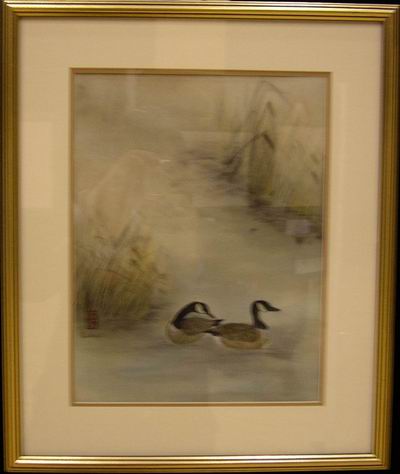 The Rocks of Muskoka by Peter Ito was judged to be one of the most expressive paintings with a stark contrast between the rapid steam of water on rocks at the forefront and the pine forest of the background. 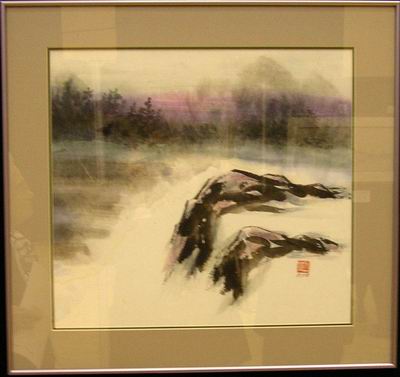 One Hundred Sparrows by Baoxing Zhang captured the rhythm of a group of sparrows wrote Dick Chen. The gestures of each sparrow and the skillful arrangement of the sparrows together made this a dynamic piece.

In honour of the 25 anniversary, the Consul General of Japan, Koichi Kawakami, opened the show with a speech on the tradition of sumi-e painting in Japan and Canada, providing some insights on what separated this form of painting from all others. James Heron, Executive Director of the Japanese Canadian Cultural Center, and Gary Bist, President of the Sumi-e Artists of Canada, added their observations on the art form and its long association with the Japanese Canadian Cultural Center. 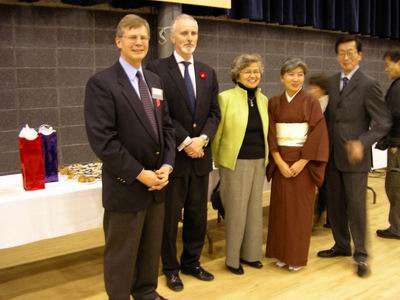 The theme of longevity was heightened by the inclusion this contemplative arrangement of bonsai contributed by Dan Maeda. 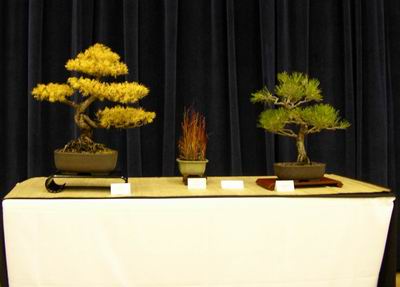 This show like others in the past was created through the efforts of a team of hard working volunteers (and their friends, relatives and spouses) who collected and hung paintings, cooked and served food and tea for our traditional tea room, staffed the sales booths, and demonstrated sumi-e painting at the show.

All that work was appreciated by enthusiastic sumi-e painting art lovers. 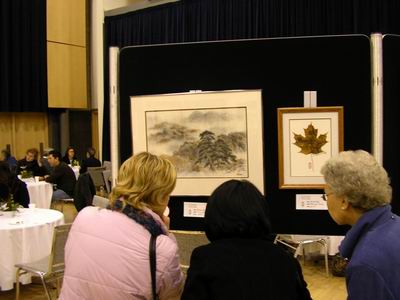 Many discussions on the finer points of sumi-e painting could be seen. 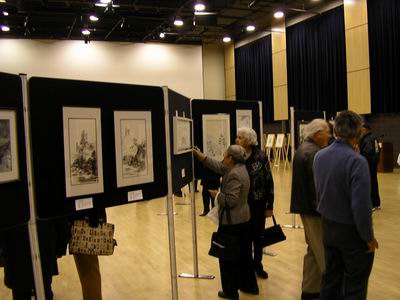 Others chose to quietly study the art. 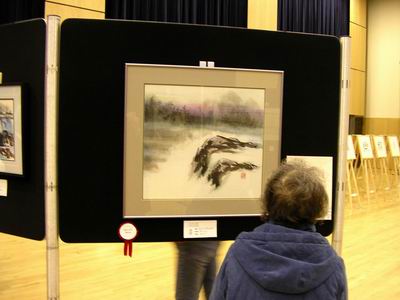 A close study of the technique was made be some of the vistors. 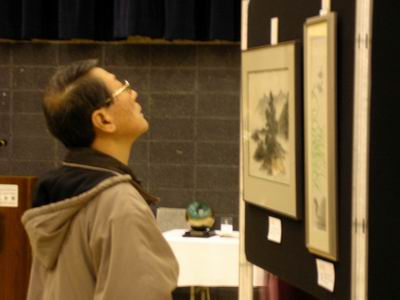 Others stepped back to gain a perspective on the work. 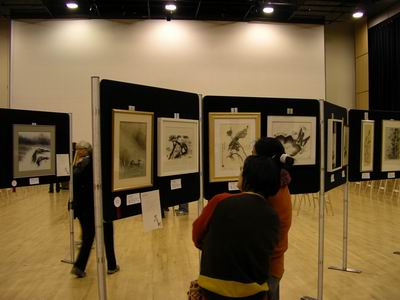 Everyone seemed to have something to say. 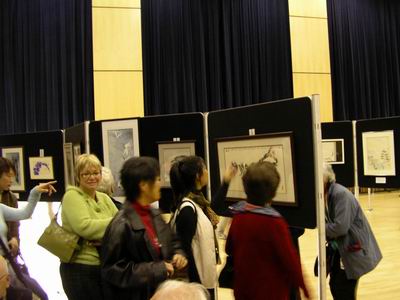 Even a solitary frog caught the attention of visitors. 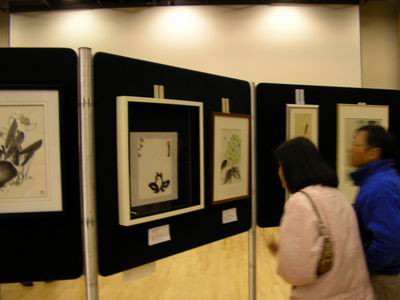 Everywhere there was discussion on the many and varied sumi-e paintings and shodo. 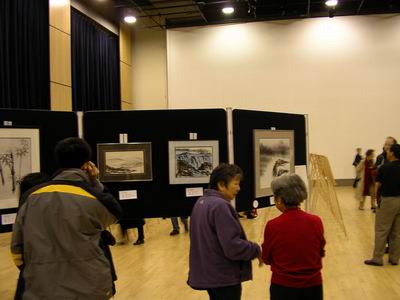 Which usually ended putting a smile on one's face. 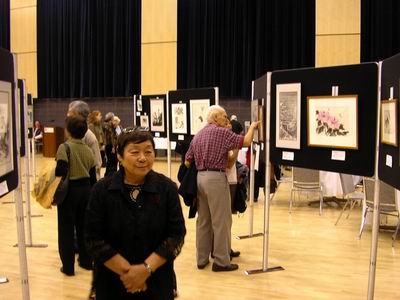 There was room for quiet contemplation too. 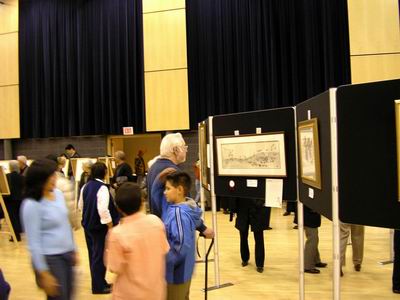 The old form of shodo characters received the same study by the visitors. 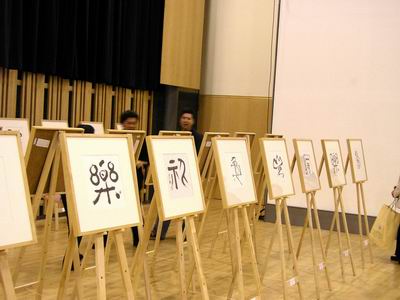 Demonstrators like Terry Adachi captured the interest of the young. 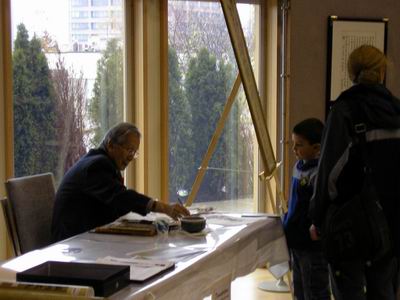 Which led to others looking in at a work in progress. 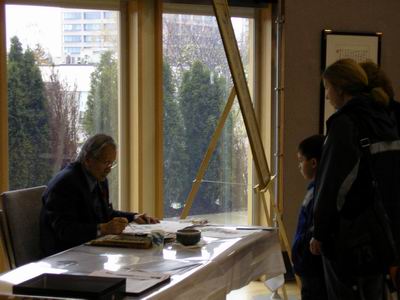 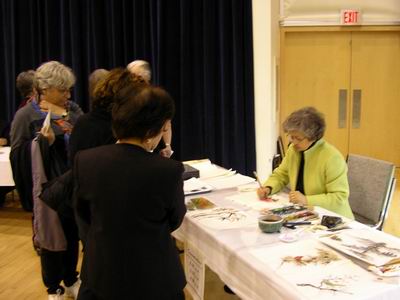 Diana Bullock had people looking on in fascination. 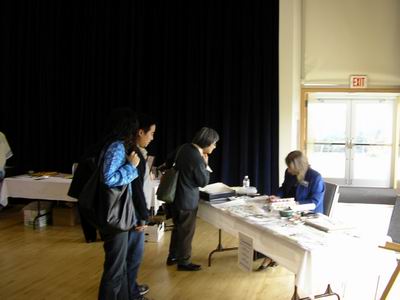 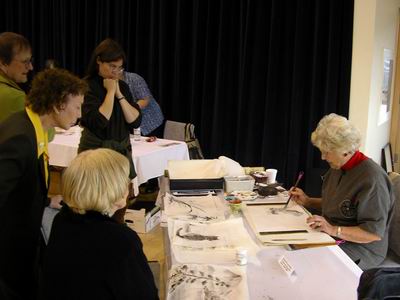 No doubt they will all be back for next year's show.