An abstract landscape is a painting that begins as an abstract and then becomes a landscape. As Moira Mudie, our instructor, suggested, it is a landscape with a twist. One well-known artist who uses this technique is Henry Wo Yue-Kee, an artist that Moira has studied with. Moira began by showing the workshop participants some abstract landscapes. 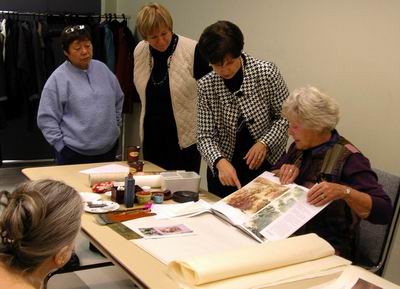 To begin the abstract landscape, first crumple your rice paper - with random crumples. Those crumples will eventually become mountains. 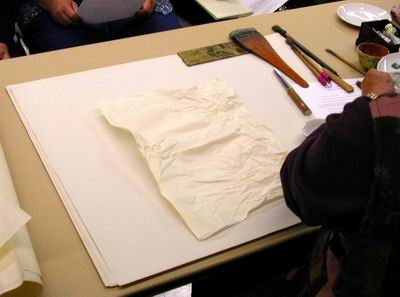 Mixing sumi-e ink into a dark wash starts the process. 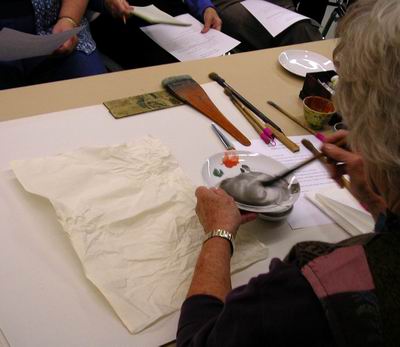 Using the flat of the brush, Moira demonstrated how to create rocky mountains out of the crumpled paper. 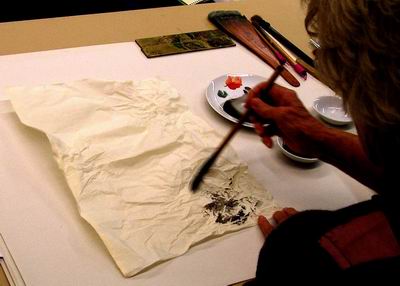 Moira then shifted to another part of the paper, again working with the crumpled sections. 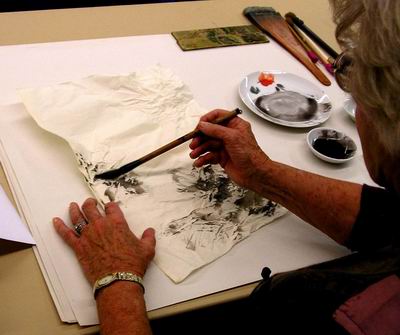 Moving to other sections of the paper, Moira's mountain ranges began to appear. 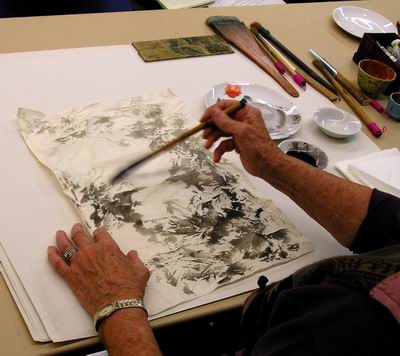 Stepping back, Moira Mudie observed the emerging landscape so far. Note the variation in tone, some sections near the bottom are very black while the top is lighter. To her left, there is a sheet of instructions. These instructions were a handout for the workshop participants to remind them of the sequence of steps demonstrated by Moira. 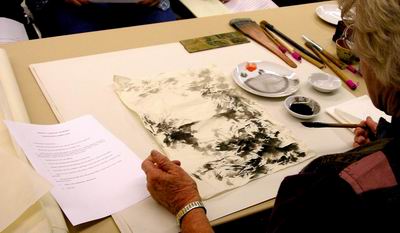 Next came colour. This abstract landscape became a fall landscape so gold, burnt sienna and red were used. 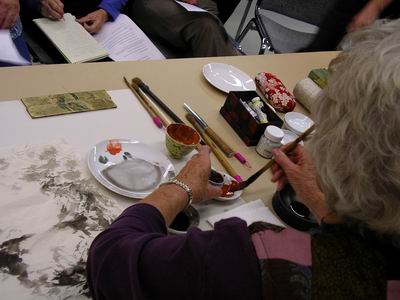 The base of the brush spread the colour with the same broad strokes as was used with the black ink. 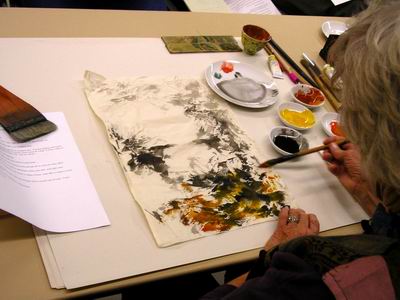 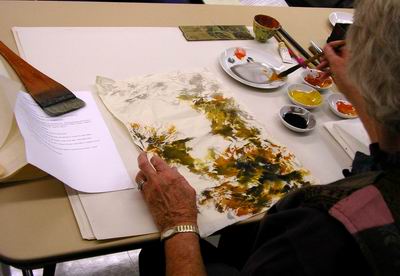 An interesting tapping technique was used to add random specks of colour. 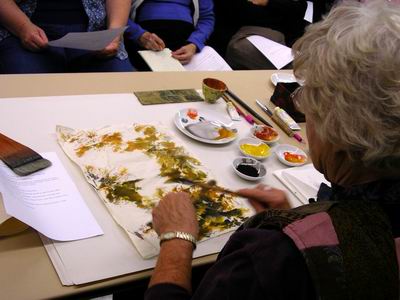 A hake brush softened some areas by blending the colours. 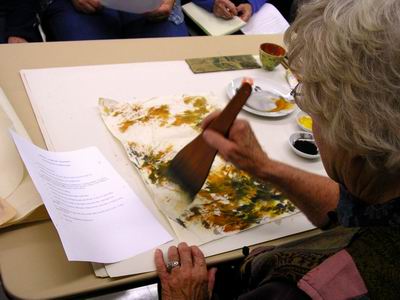 The mix of colours and black ink led to a dramatic and vivid landscape at this point. 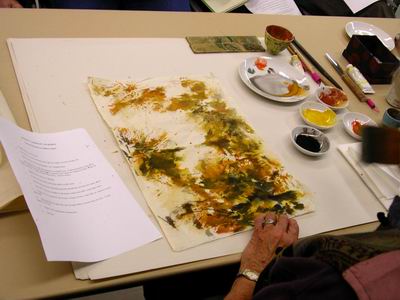 Moira then worked in red colouring to further the development of this fall landscape. 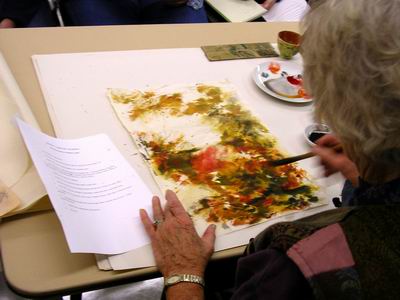 It was time for the workshop participants to try their hand at an abstract landscape while Moira's painting was drying. 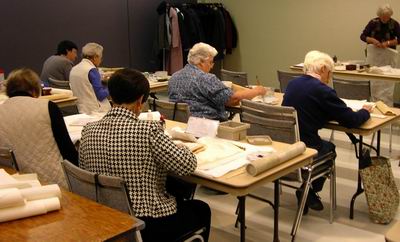 Then it was part two of the workshop as Moira completed the abstract landscape with a drier painting. 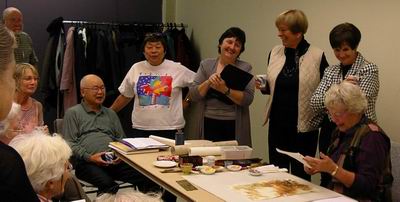 Moira returned to black ink to highlight the mountains and rocks. 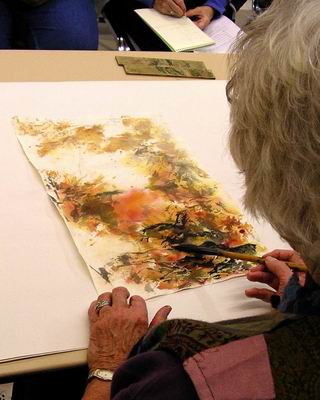 Using the flat of the brush, Moira emphasized certain parts of the painting. Moira advised us to take a random approach rather than to apply the black ink in a uniform way. This approach led to a landscape that was closer to what we normally see in nature. 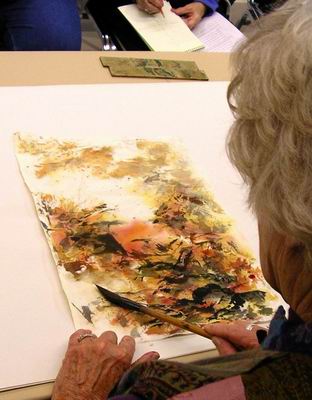 Pelican white is one colour that can be effectively used, particularly in winter scenes, Moira advised us. Even with a fall scene some white can be used to highlight lighter areas. 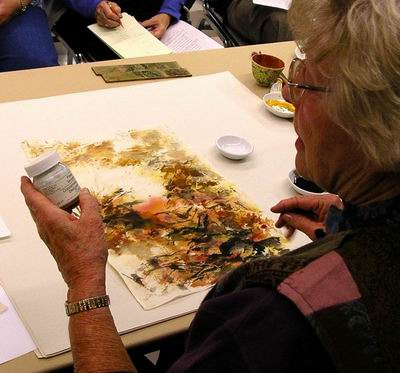 To create a lake or stream, Moira used a light indigo blue and painted the less crumpled parts of the rice paper. 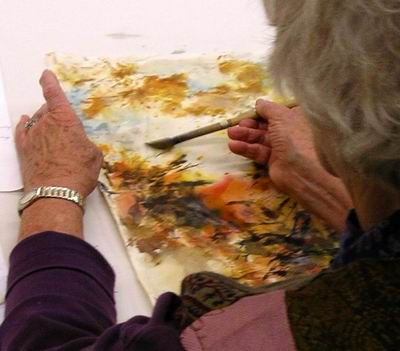 A reverse brush stroke can be used to create a vivid water effect. 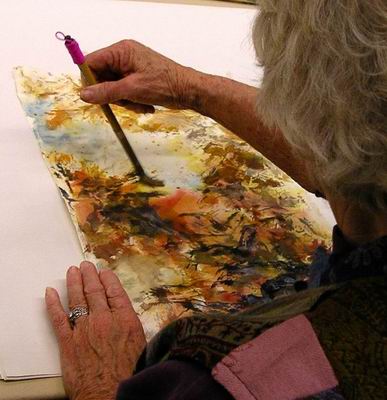 Now is the time to think of adding houses, trees, people, stairs, bridges, pagodas and so on consistent with the perspective, Moira told the workshop participants. 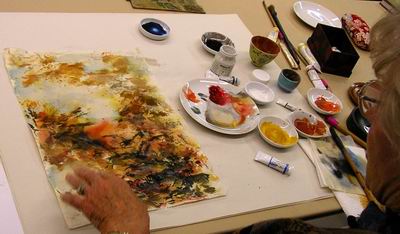 Moira added more red and white and gold colouring to dramatize the work. 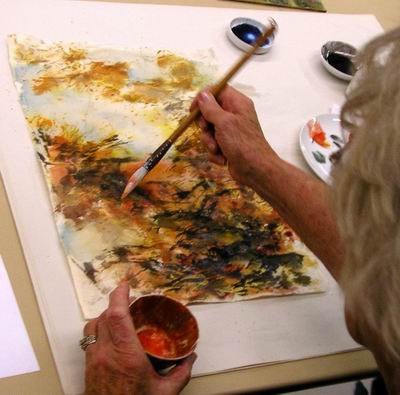 The painting was almost filled with paint at this point but some light spaces added a necessary contrast to create a realistic landscape from an abstract beginning. Here's a tip: consider turning the painting around and looking at it from several views. You may find that a landscape that you had not considered suddenly appears before you when you change perspective! 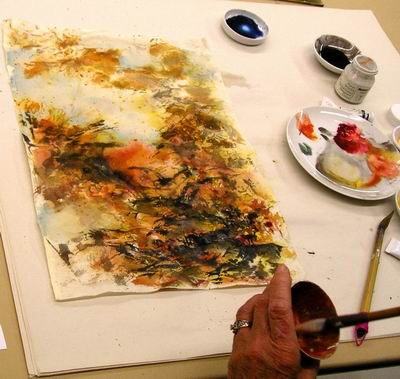 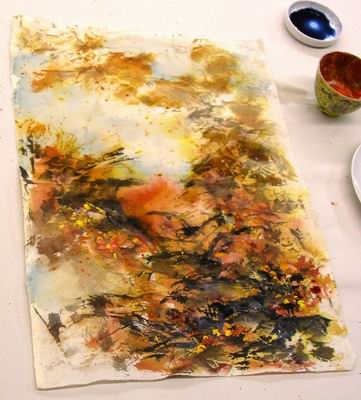 Workshop participants returned to working on the abstract landscapes they had started earlier to apply their own finishing touches with a few suggestions from Moira Mudie with one-on-one coaching discussions.